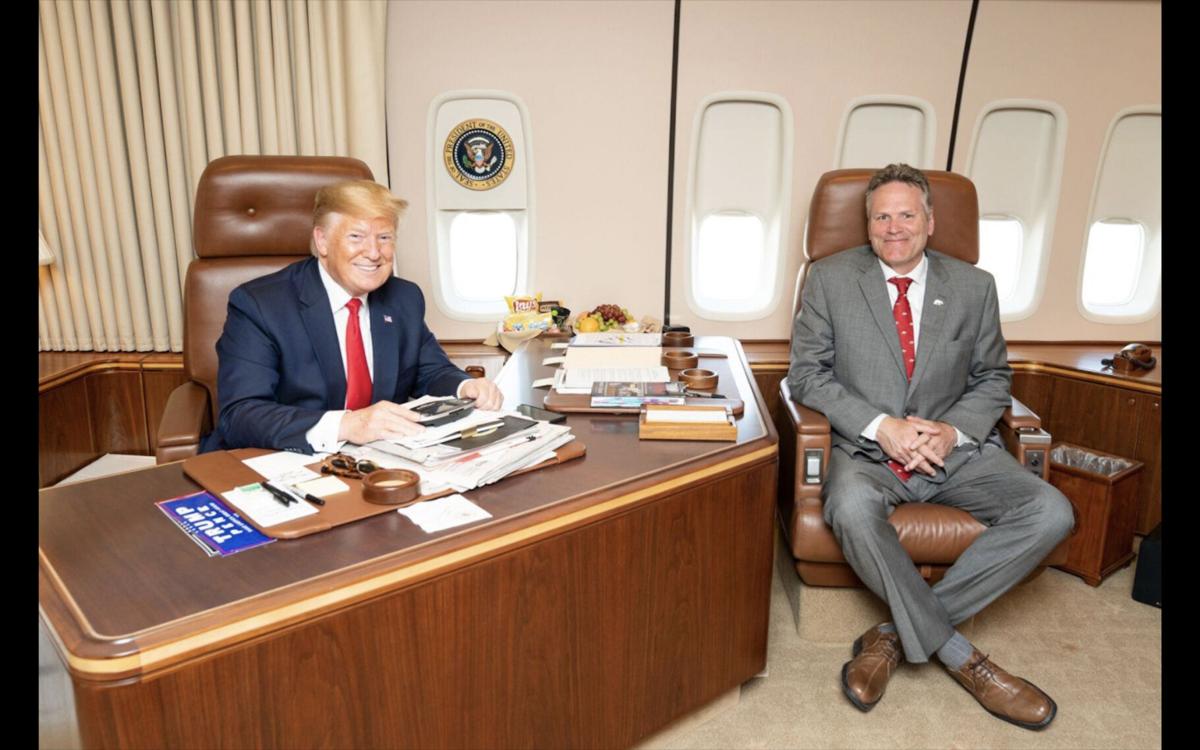 Alaska Gov. Mike Dunleavy, right, talks to President Trump aboard Air Force One in this June 2019 file photo. Trump is endorsing Dunleavy’s re-election in 2022 but with a caveat. 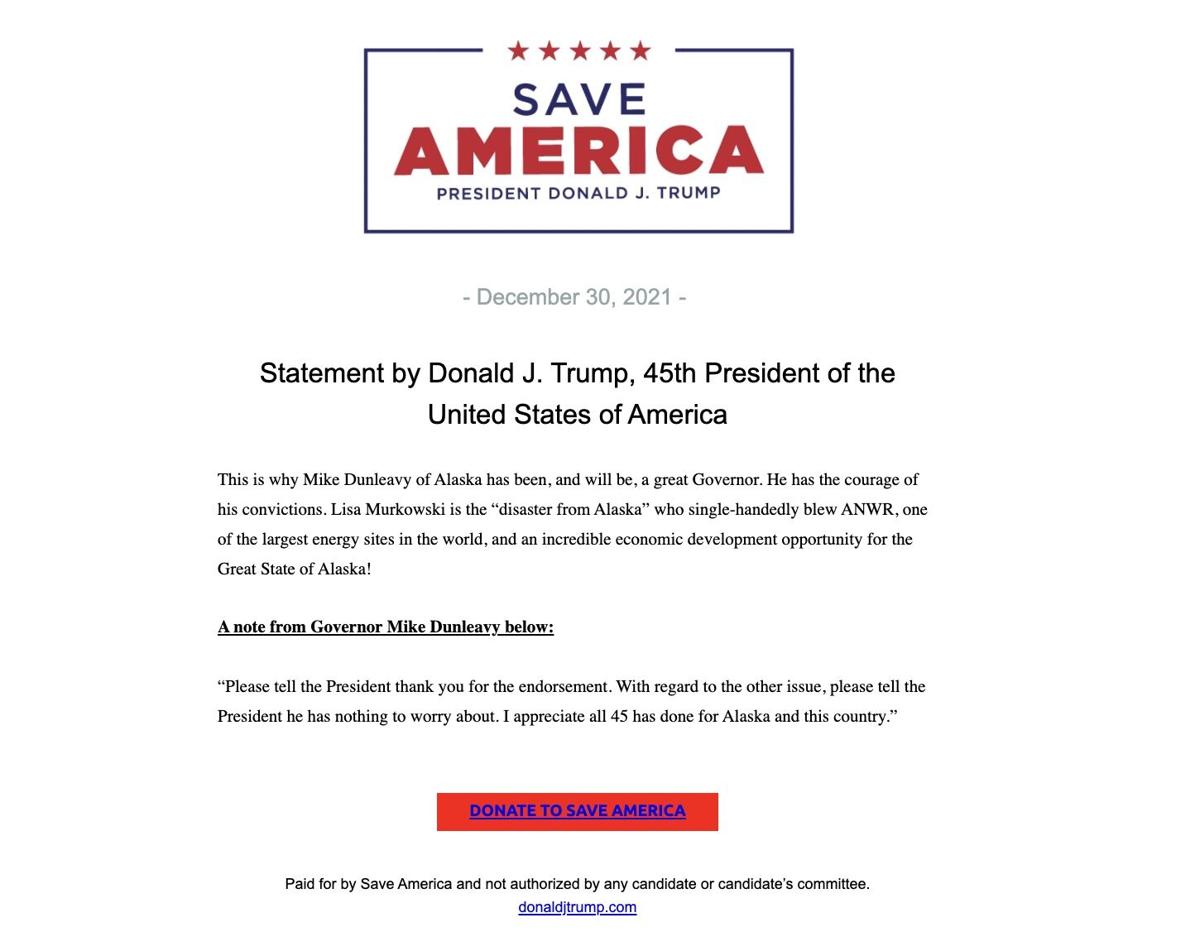 Save America is a leadership PAC created by President Donald Trump following the 2020 presidential election. The PAC sent this message to donors.

Alaska Gov. Mike Dunleavy, right, talks to President Trump aboard Air Force One in this June 2019 file photo. Trump is endorsing Dunleavy’s re-election in 2022 but with a caveat.

Save America is a leadership PAC created by President Donald Trump following the 2020 presidential election. The PAC sent this message to donors.

Former President Donald Trump offers conditional support for Gov. Mike Dunleavy’s re-election. Many of America’s oil pipelines sit idle or are not operating to capacity, according to a national energy report. And President Biden tightens restrictions on U.S. support for overseas coal plants.

An endorsement with strings attached

Gov. Mike Dunleavy’s re-election bid has the endorsement of former President Donald Trump. But Trump’s support comes with a condition.

The former president said he will rescind his endorsement, if the governor supports fellow Republican Lisa Murkowski in her re-election bid to the U.S. Senate.

“If Mike endorses her, which is his prerogative, my endorsement of him is null and void, and of no further force or effect!” Trump said in a written statement.

On Friday, CNN, Fox News, MSN and The Hill reported that Dunleavy accepted the Trump ultimatum. Save America, the leadership PAC Trump started in 2020, published the following statement attributed to Dunleavy: “Please tell the President thank you for the endorsement. With regard to the other issue, please tell the President he has nothing to worry about. I appreciate all 45 has done for Alaska and this country.”

Trump has vowed to defeat Murkowski over her vote to convict him on insurrection charges after the Jan. 6 attack on the Capitol.

Half of the nation’s crude oil pipelines sit empty as production dropped since the 2020 pandemic, OilPrice.com reports. Prior to the pandemic, the utilization rate was 60 to 70 percent.

OilPrice.com reports that not all pipelines are being used equally across the nation. Many do not operate at capacity. That is the case with the Trans-Alaska Pipeline System.

Alaska’s 800-mile pipeline has not been used to capacity for many years, which points to long-term production trends, though the 2020 pandemic contributed to the slowdown, according to U.S. Energy Information Administration data.

President Biden has ordered an end to overseas support of coal plants. The move increases pressure on the rest of the world to move away from coal. But the impact on U.S. coal producers remains to be seen.

Alaska’s Usibelli coal mine produces more than a million tons per year. Across the U.S., coal production in 2021 is projected to rise by 6% over 2020.

The new Biden policy will halt U.S. support for most new coal power plants overseas, which includes financing as well as diplomatic and technical help.

The new policy was disclosed in a cable from the White House to U.S. embassies. The announcement said in part: “Our international energy engagement will center on promoting clean energy, advancing innovative technologies, boosting U.S. clean-tech competitiveness and providing financing and technical assistance to support net-zero transitions around the world.”

The tiny coastal village of Newtok in western Alaska is moving to higher ground as warmer temperatures cause flooding from sea ice melt and shore erosion.

The ground is caving in under homes, fuel tanks, water systems and roads, reports Indian Country Today. Permafrost that girds the ground is thawing.

The Alaska Native community is projected to become uninhabitable within five years, according to the U.S. Army Corps of Engineers. Newtok is the ancestral land of the villagers.

The Arctic is warming at twice the rate of the rest of the planet. Sea ice that once protected shoreline communities is disappearing.

Alaska Air has unveiled a strategy for recruiting a more diverse workforce of pilots, the airline announced.

The new initiative offers financial aid to aviation students studying to become commercial airline pilots. The program, called True North, is being offered at the University of Maryland Eastern Shore.

“I am excited by this program because it will remove so many barriers — whether that be financial or otherwise — for Black, Indigenous and people of color pilots to have full and rewarding careers in aviation,” said Capt. Ron Lines, an Alaska Air pilot since 1999 who is heading the initiative.