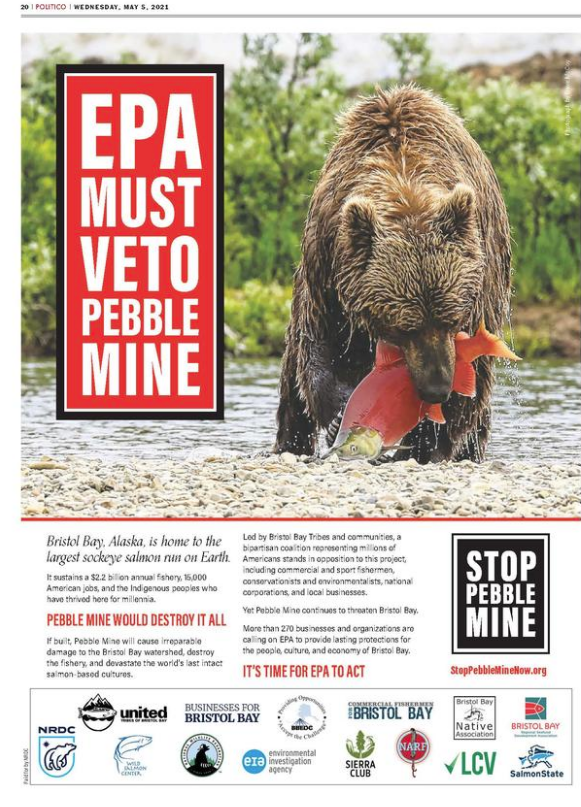 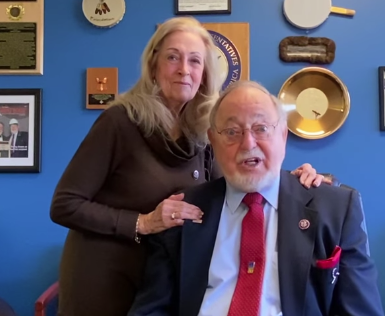 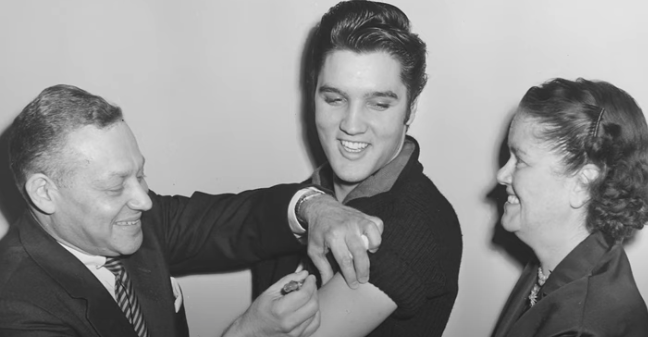 A Washington, D.C., campaign to save Alaskan fish, a global oil company’s bullish forecast and the Dean’s Facebook video are part of five things to know in Alaska politics.

Will Alaska salmon stop a copper mine?

A marketing campaign by the Sierra Club and other environmental groups is underway in Washington, D.C., to protect the world’s most plentiful wild salmon fishery in Alaska.

The National Resources Defense Council said in an article that the ad is part of a marketing blitz that targets lawmakers. The ad has a photo of a bear, standing in an Alaska river, with a salmon in its mouth.

The message states: “EPA Must Veto Pebble Mine.”

The ad urges the EPA to implement permanent conservation protections in Bristol Bay, under the Clean Water Act.

Pebble Mine developers are challenging a decision by the U.S. Army Corps of Engineers to deny them a permit.

Pebble Mine is at the headwaters of the world’s largest stock of wild sockeye salmon. If developed, it would be one of the largest mines in the world.

Pebble Mine contains gold, copper and other sought-after minerals on the global market. Demand for copper is at record levels for the production of electric vehicles and other technology.

ConocoPhillips Alaska has plans for a “significant investment program in 2021,” a year after Covid-19 idled jobs and voters rejected a tax increase on high-yielding North Slope fields.

“Last year’s response to the pandemic called for shutting down almost all drilling and Ballot Measure 1 was up for a vote,” ConocoPhillips Alaska President Erec Isaacson said, according to AK Drilling, an industry publication.

“With the defeat of the ballot measure and our COVID-19 protocols in place, we are planning on a significant investment program in 2021,” Isaacson told the Alaska Support Industry Alliance.

The company will have “four operated rigs and one non-operated rig drilling.”

America had Elvis Presley roll up his sleeve and inspire a generation to get their polio vaccines.

Alaskans have 87-year-old Rep. Don Young as their role model for the Covid-19 vaccine.

Young is featured in a public health video on Facebook, part of Gov. Mike Dunleavy’s “Sleeves Up for Summer” vaccination drive.

Young does not roll up his sleeve in the 12-second spot.

He is nattily dressed in a Navy blue jacket and red tie. His wife, Anne, stands next to him.

With anti-vaxxers in the GOP taking political shots and raising concern about vaccine mandates, the Dean of the U.S. House offered reassurance: “It is your own choice,” he said.

Young’s video is not likely to go viral, as the Elvis inoculation image did in the 1956 public health campaign.

But the Dean of the U.S. House may want to take another nod from the King of Rock ‘ Roll.

The U.S. cruise industry received CDC permission this week to embark on trips.

Folks on shore may glimpse the large ships plying U.S. waters, but these trips are not the real thing. They are fake cruises to test operators in Covid preparedness.

Under CDC guidelines, volunteers will fill the role of commercial passengers. Voyages will test the readiness and follow-through of prescribed CDC protocols.

• Ships must have enough volunteers to operate at 10% of capacity.

• Enlistees must be 18 or older and fully vaccinated, or free of medical conditions that put them at risk of serious complications from Covid-19.

In case you missed it

“We are going to take it upon ourselves to right a wrong that the federal government should have dealt with a long time ago,” Dunleavy said in a press conference attended by several Native Vietnam War veterans.

Nearly 2,000 Vietnam War-era veterans or their next of kin are eligible for a federal land allotment. George Bennett, a Native Vietnam War veteran, spoke at the press conference and touched on his war experiences.

Plans to fulfill the land allotment program, however, are deferred for two years under the Biden administration.

“What the governor and the state of Alaska are proposing today to actually help Alaska Native Vietnam-era veterans stands in stark contrast to the Biden administration’s shameful recent decisions to hurt these deserving Alaska heroes,” U.S. Sen. Dan Sullivan said.