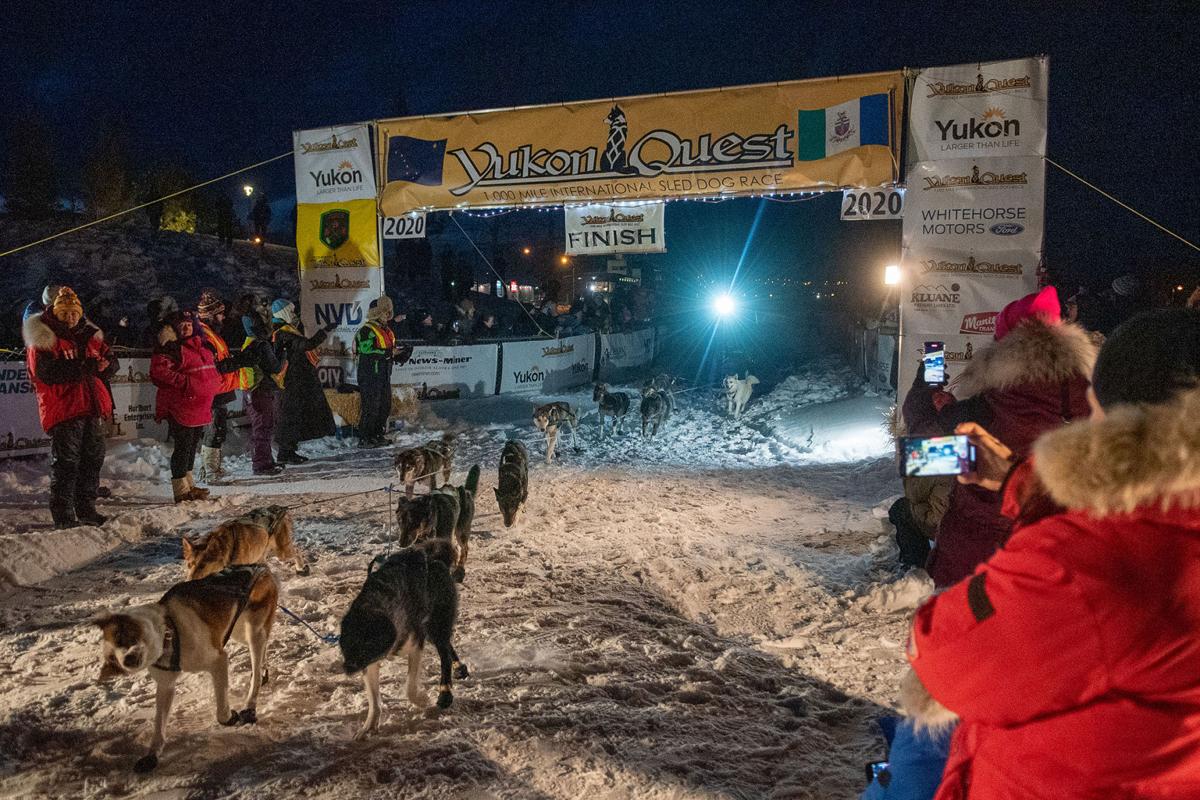 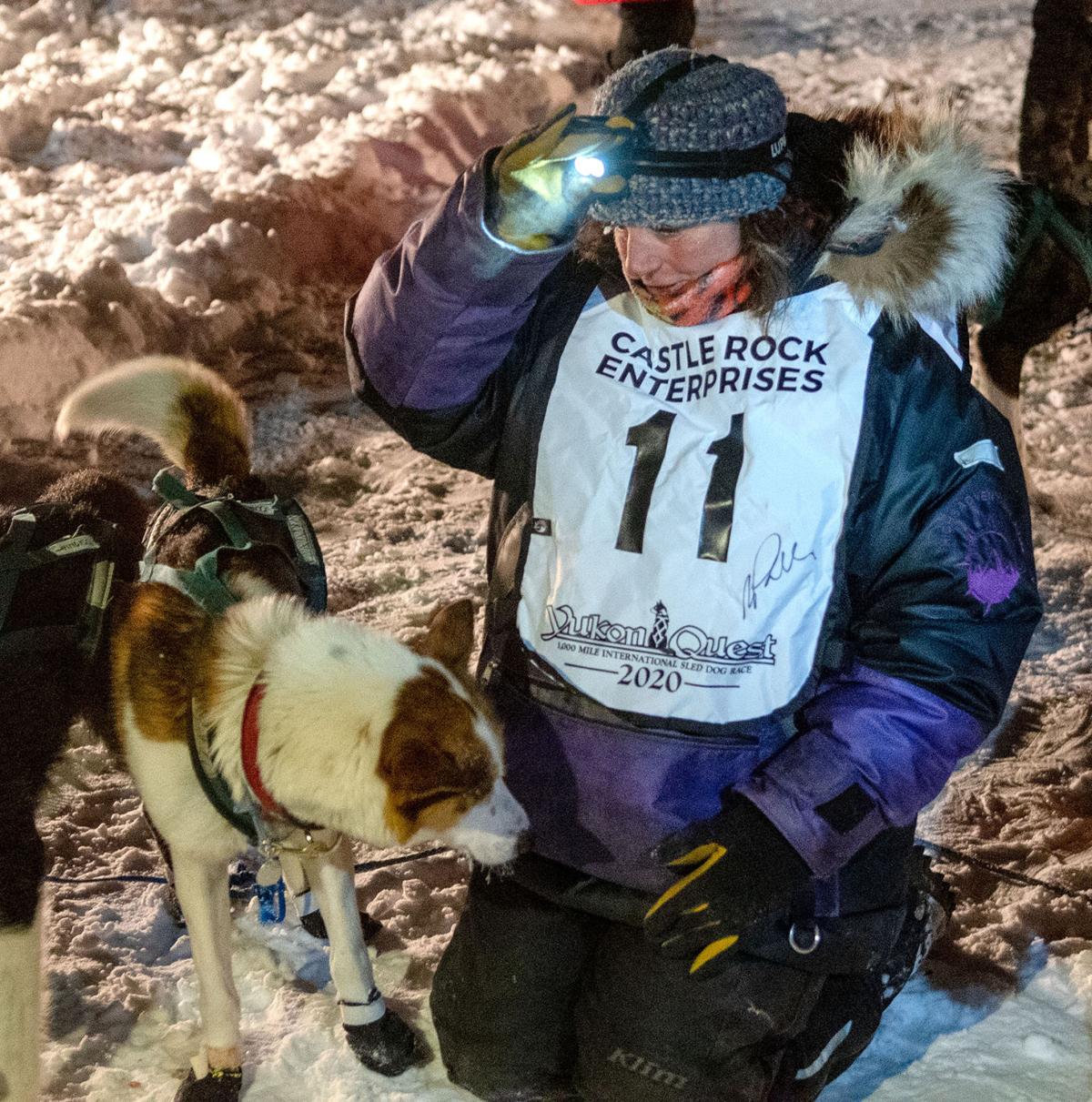 Yukon musher Michelle Phillips may not have won the 37th Yukon Quest, however, the crowd she garnered was just as large as the victor’s, Brent Sass.

In her seventh Yukon Quest, Phillips posted her best finish, second place. Her official end time is 6:51 p.m. Tuesday, but under the clear skies and the moonlight, her headlamp could be seen through the willow bushes before she came into view.

The cheers from the onlookers further down the trail indicated she was on her way to the gathered fans at the finish chute in Shipyards Park.

As she crossed the line, the noise grew louder. When she dismounted her sled, Phillips held up her hands as a sign of thank you, before attending to the dogs, who got meatballs as treats.

She hugged each one in turn, stopping at her leaders. Kneeling down, she embraced the two while the media snapped pictures.

Two other mushers have also completed the race, with Cody Strathe coming in third and Allen Moore in fourth. Seven mushers are still on the trail and four have scratched.

Phillips was in a back-and-forth battle with Sass for much of the race, which began Feb. 1 in Fairbanks.

She entered Braeburn an hour behind, but couldn’t make up the difference on the way to Whitehorse.

Instead, she said she chose to stop and rest with the team; the snowstorm they departed in left a difficult trail in its wake.

“It was too long of a run, and the conditions were too slow,” Phillips saud. “I had to do what was right for my dogs, so that’s what I did.”

After every answer she gave, the crowd would erupt in cheers.

Phillips spoke about the highs, and the lows, of the race.

“Oh, there were so many adventures,” Phillips said. “It was an adventure from start to finish. There was a lot of wind, a lot of snow, some crazy downhills. Eagle Summit, that was crazy.”

Being so close for so long with Sass, Phillips was asked if she believes she can beat him next year.

“I sure hope so,” she said, laughing. “There is always the Iditarod. A few more weeks, we will be ready to roll.”

Phillips arrived in Braeburn poling with a trail marker, as she lost her ski pole along the way. It’s these small differences she believes led to Sass getting the lead.

“We are a really evenly matched team,” Phillips said. “I lost my ski pole before Pelly somewhere. When we were in the Chain Lakes, he pulled out his ski pole, and it was really a time you needed a ski pole.

“You could really push your team through with that snow. I think that made a big difference. Then with the snow that happened, I decided not to run straight through.”

Before 2020, Phillips’ best finish in the Quest was fourth, she said she is happy to have improved on that.

“I’m happy that I beat my husband (Ed Hopkins); his best finish is third, so that’s important,” said Phillips as the crowd burst into laughter and cheers.

“I’m proud of my team. They are a beautiful group of dogs. We went through some really tough situations.

“We jelled as a group, they listened, they are just wonderful, wonderful dogs to work with and a great team.”

In the previous Quests she has done, Phillips said, she has usually traveled the opposite direction — Whitehorse to Fairbanks.

“I haven’t come from Fairbanks this way in many years,” Phillips said. “That was very interesting, so quite often I go from this way; you know you’re at a different pace.

“I find it really tough coming from Fairbanks to Whitehorse. I found it hard. It was a challenge for sure.”

Phillips said she went into the race feeling no pressure, but wanted to win and represent the territory well.

“This is what I do in the winter,” said Phillips.

Sass completed the 94.2-mile stretch from Braeburn to Whitehorse in one run. When she left the final checkpoint, Phillips said, she did not consider going straight through.

“I just knew with the conditions and the run before that, I wasn’t going to run it straight through,” she said. “That was it; bottom line. That was my bottom line, and I could tell from my dogs.”

Even though she stopped, Phillips said she felt there was still an outside chance at winning.

“Yes and no,” Phillips said when asked if she thought, leaving Braeburn, it was not winnable.

“It’s a race. Anything can happen in a race. Brent may have decided to stop. I didn’t think he would, but he might have.

When Phillips crossed back into Canada, the fans at all the checkpoints came out to root for her and give her words of encouragement.

“That was awesome,” she said. “It was super-nice to have so much love and support and such a great crew. It was a lot of fun.

“One thing about the Yukon Quest which is really nice compared to the Iditarod is you always have a lot more people around that you know and care for you and give you support.

“It really helps you through the tough times. It’s a huge difference, and the hospitality is awesome.”

Sass said enthusiastically at the finish that he will return for the 2021 race. Phillips was noncommittal about coming back to challenge him for the title.