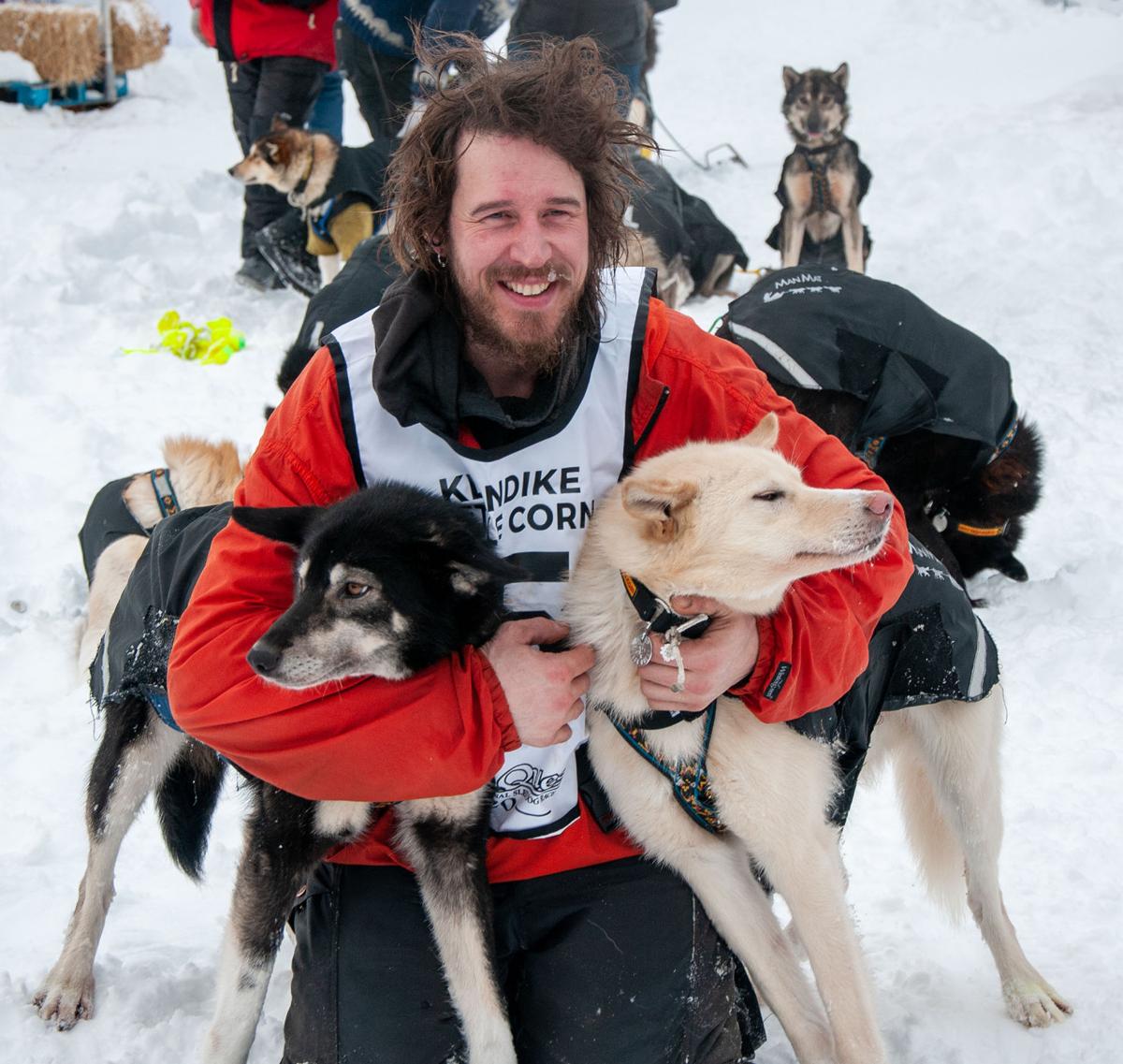 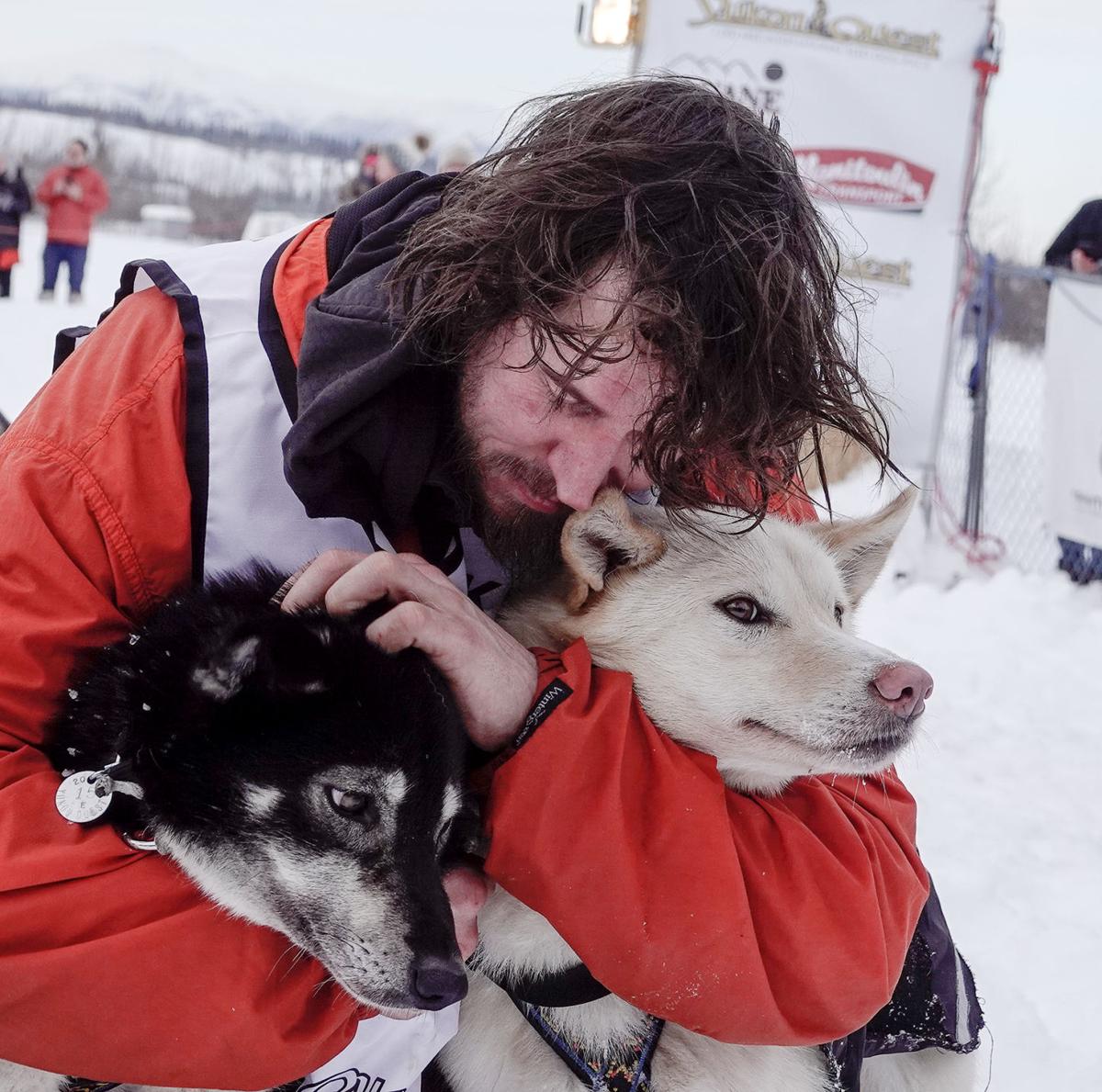 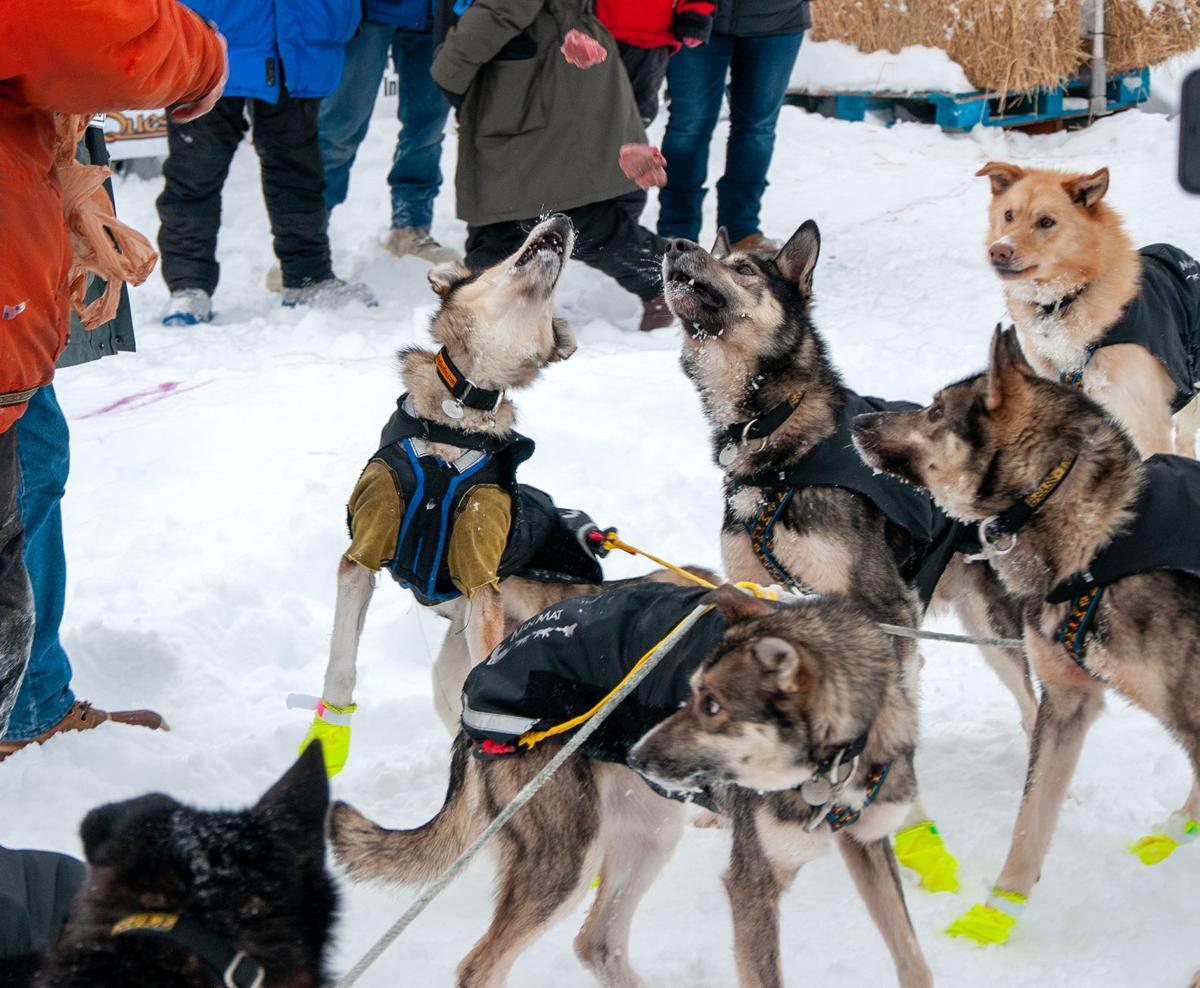 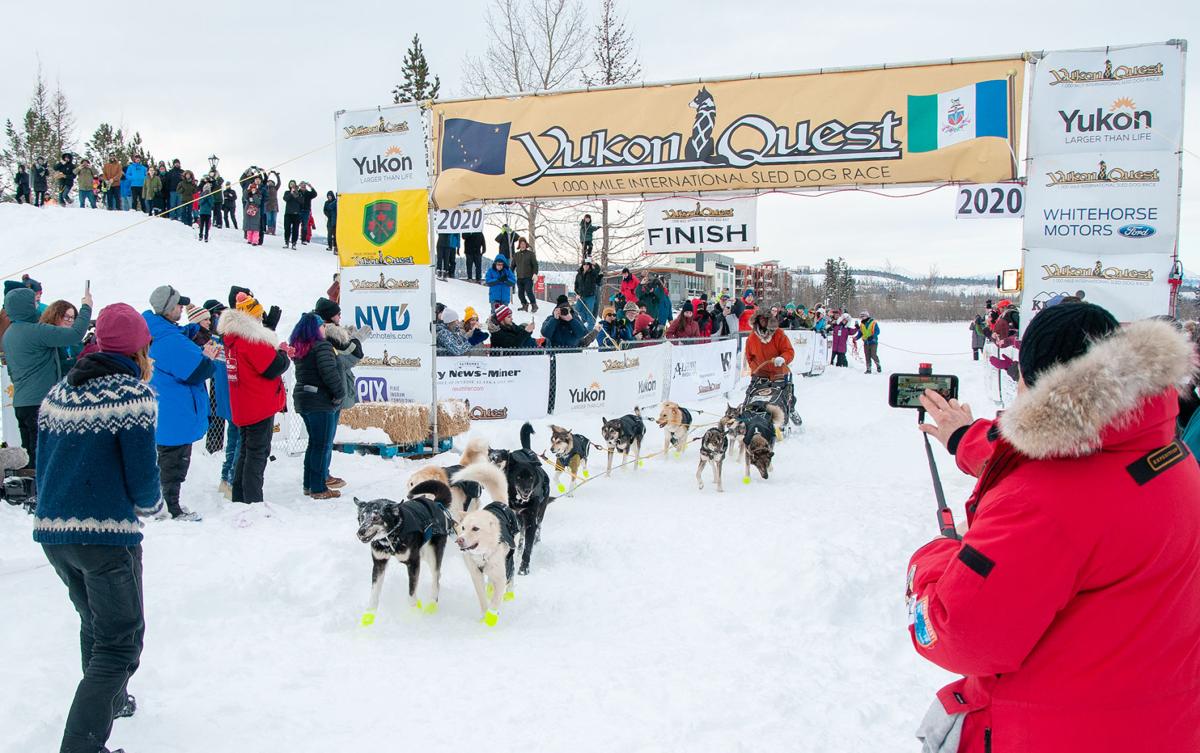 Brent Sass, 40, from Eureka, Alaska, kicked and ski poled his way into view, then across the finish line at the chute in Whitehorse, Yukon, at 2:53 p.m. Tuesday with 11 dogs.

It's a position Sass has become familiar with — first across the finish line, Yukon Quest champion. For Sass, it's his third victory and second in a row.

As he dismounted his sled in front of the roaring fans, Sass collapsed in the snow and cuddled with his wheel dogs. He got up, clothes sopping wet, and congratulated each dog in turn.

When he reached his leaders, Wooderson and Morello, he knelt in the snow, one dog under each arm and nuzzled his face up to theirs. The clicks from the cameras rang through the air.

Morello has been in lead for Sass before. Wooderson, 3, was on the championship team last year, but had his first opportunity at the front this year and excelled.

"Morello has been one of my main leaders for a couple of years, but Woody had never run in lead in a race before this race," Sass said. "We had run him a bit in lead this season but I just experimented with leaders on the Yukon just cause it was such hard trailbreaking and a lot of different conditions.

"He just started shining and led the whole second half of the race."

Sass said he found plenty of future leaders along with Wooderson on the Quest trail.

"I found a whole lot of leaders in this race," he said. "I knew they were leaders, but, it's a whole different story when you put a dog up in lead in a race with a lot on the line and they know it. They all excelled. It was a really fun race."

Sass joins some exclusive company as a three-peat champion. He joins Allen Moore, who has three wins, and Hans Gatt and Lance Mackey, who have four apiece.

He won his first Quest in 2015 and realized the next year how difficult it is to win consecutive races.

"I was thinking about that on the way in here," Sass said. "I tried really hard in '16, but Hugh Neff came out of nowhere and had the race of his life. I came in an hour and a half behind Hugh.

"I realized then repeating is a real difficult thing. I went into this race wanting to have fun, obviously wanted to repeat, but (thinking) run your own race and don't get caught up in everyone else's race. That's what we did. Here we are."

The battle for first came down to Sass and Canadian musher, Michelle Phillips. The duo reached Braeburn an hour apart, but Sass was able to put a comfortable distance between them finishing, over 20 miles ahead.

Sass said it was a "hell of a battle" with Phillips.

"She has a really good dog team, but I'm extremely proud of that dog team down there, they did an amazing job," Sass said, getting choked up.

He believed it was the plan he enacted three days prior that led him to pass Phillips.

"I think it's an accumulation of the last three days leaving Dawson," Sass said. "My plan was definitely a more conservative one. It was a risk to give her the edge. She only camped twice across that big stretch.

"We camped three times with five-hour breaks. It was that rest that we banked that I think gave us the edge I think," he said.

Phillips was first into Carmacks but Sass overtook her on the way to Braeburn.

"At that point, I had that rest that I banked," Sass said. "My team was faster. I was sitting on Mandanna Lake waiting for her headlamp, trying to squeeze out every last bit of rest. When I saw her, I bootied my dogs up started my cooker for my last wet snack. I left 10 minutes after her and caught her in 10 or 15 minutes.

"I was pretty confident that we had the speed on her at that point and I wasn't going to stop kicking and poling and she came in with a trail marker. That looks good but that doesn't do anything for you.

"The dogs did an amazing job and I couldn't be prouder."

"They are all pretty amazing but this one, with all adverse conditions I feel like we overcame a lot out there and proved we had a really tough dog team," he said.

"Last year, that race was a joke, it was like a magic carpet ride. We cruised down the trail at fast speeds, never really had major obstacles. This year, we were faced with a lot of obstacles.

"I had some dog issues to overcome, you always pay attention to dog care, but I had to pay extra attention to the dogs in this race. It panned out. It worked for me.

Sass said this was one of the toughest he has run.

"I've run 13 Yukon Quests and I broke trail on this Quest 10 times more than any other races put together. It was a challenge. There wasn't a lot of storms but there was a lot of wind on the Yukon.

"I mean, this was a slog, there was no doubt. This was almost a 15-hour run coming into here. I love it, I would rather have some challenges out there and I think my team is pretty tough."

After traversing through a winter storm to reach the finish, Sass said he is going to need some new apparel.

"I think I'm going to throw all these clothes away," he laughed. "I burnt my boots one year and I'm ready to burn these. It's one of those deals, with all the trail breaking I had to do a lot of work helping the dogs. I'm feeling it."

A teary-eyed Sass thanked his handlers, Ida Mortensen, Mike Ellis and Steve Stoller, as well as his parents Mark and Christine and the rest of the team taking care of Wild and Free Mushing.

"The saying is it takes a village and I have the best people around me," Sass said, crying. "I was thinking about all of them once we got on the Yukon. It's kind of like a look back at wow … when you pour every cent and energy and time into something, it's pretty epic to have this be the outcome."

Canadian musher Michelle Phillips finished about 7 p.m. Yukon time in second place. Nine other mushers are still on the trail.