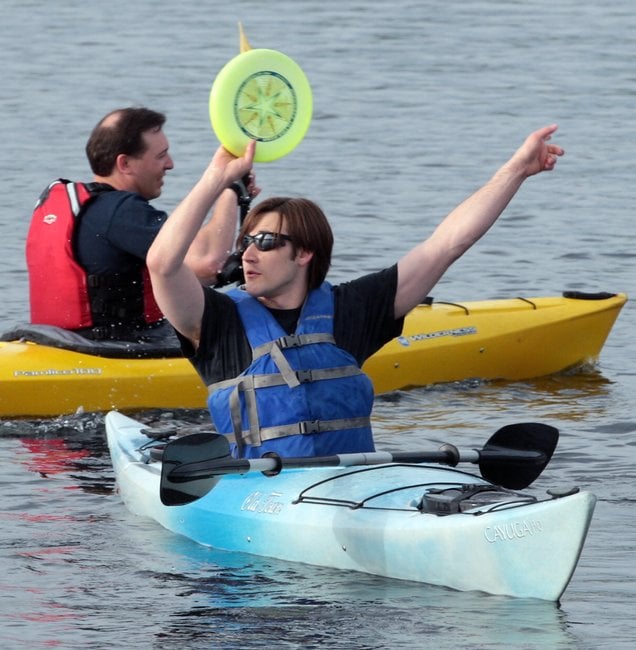 FAIRBANKS — It’s hard to throw a Frisbee when you’re sitting in a kayak.

That was one of my first observations playing the first two of what will be many games of Epic Frisbee in a North Pole area pond this week.

Rules-wise, Epic Frisbee is a lot like the game of Ultimate Frisbee, but when you’re playing in canoes and kayaks it feels completely different.

Tony Mustered started playing on the small gravel pit pond three years ago. It started as an adaptation of Ultimate, but another friend told him “this isn’t ultimate, this is epic” and the name stuck.

Since then, the rules have been refined and the game has gotten more popular and competitive. Newcomers are still welcomed but they should be advised to expect two full hours of sprinting back and forth across the pond.

“A lot of people think they’re going to come and paddle around a little and throw the disc a little,” Mustered said. “It’s actually a good workout.”

No kidding. My other lessons from my first week are to bring a water bottle and towel.

Mustered, 39, an expediter for Design Alaska, is a natural organizer for the game. In addition to conveniently having a pond in his front yard, he also has several extra kayaks used for a small kayak-touring company he operates.

During Epic season, Mustered puts a sign on a tripod in front of his property with one word: epic. It must have puzzled the neighbors when it first went up.

Although Ultimate has a reputation as a beer sport, Epic is not. That’s probably a good idea given the not-uncommon surprise of capsizing. Mustered is safety-conscious and makes sure everyone wears a lifejacket. Newcomers also read a set of printed rules before getting into the water.

The game begins with teams lined up along floating 55-gallon barrels on opposite sides of the pond. The object of the game is to hit the barrels with the disc.

To start, a team raises their paddles and yells, “Epic” before hurling the disc as far as they can. Then, rather anti-climactically, the same team paddles after it, retrieves it and hurls it forward again, because as I said, it’s hard to throw a disc in a kayak.

The game really gets going when the two teams meet in the middle of the pond. Epic is a good name for the game, but Bumperboats or maybe Battleship would also work.

On a good day, there are as many as 14 boats (mostly kayaks) on the water fighting for control of the disc. Speed is important, but so is being able to maneuver in a logjam of boats and to grab a drifting disc without tipping over.

In keeping with the spirit of Ultimate Frisbee, Epic is not supposed to be a contact sport, but it’s hard to stop the momentum of a moving boat. In general, the rules allow blocking an opponent’s boat, but deliberately ramming another boat is a foul. So is pushing an opponent’s boat or paddling a boat when you have the disc.

My apologies to anyone who was rammed by my green Corsica during last week’s games or got hit with a paddle. It’s easy to get caught up in the moment chasing after a loose disc.

My teams went zero for two in the last week’s games, which I like to think of as pure coincidence.

“I’m almost always on the team that ends up with the most points,” Mustered said matter-of-factly after the second game. But despite this boast he and the other longtime Epic players are pretty good in the sportsmanship department, explaining the rules as they went and making sure new players got some time with the disc. The game has become a lot more fast-paced as players have gotten more experienced, especially since the game has gone from mostly canoes to mostly kayaks, Mustered said.

In a pair of games this week, there were several unexpected capsizes, but the only injury was a jammed thumb.

Epic is just for fun for now. Mustered has plenty of experience as an entrepreneur between his kayak business and past anime shop. He has toyed with the idea of making Epic a money-making venture, but for the time being it’s just a good way to spend a few hours a week on the pond.

Anyone who wants to play and would like to know more can call Mustered at 460-2909. Games are Tuesday and Thursday from about 7 to 9 p.m.

A bull moose walks through the taiga with Alaska Range in the background. Courtesy of Dan King, Two Rivers