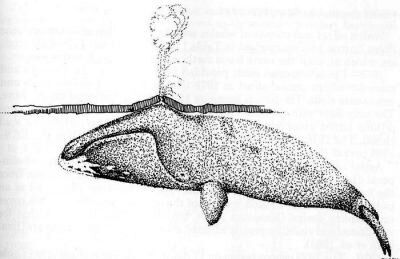 This sketch shows a bowhead whale using its rostrum to break seice ice, enabling it to breathe. J.C. "Craig" George 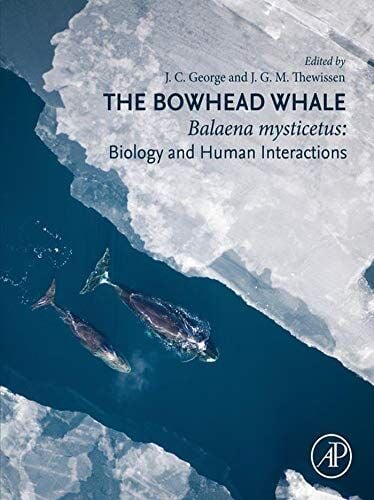 This sketch shows a bowhead whale using its rostrum to break seice ice, enabling it to breathe. J.C. "Craig" George

Editor’s note: This is one of a series of columns exploring bowhead whales and the bowhead whale exhibit now on display at the University of Alaska Museum of the North.

Alaska’s official state marine mammal is the bowhead whale, Balaena mysticetus. The population of bowheads frequenting the Alaska Arctic coast, called the Bering-Chukchi-Beaufort Seas (BCB) stock, was hunted nearly to extinction by Yankee whalers between 1848 and 1907. In the century since World War I, the BCB stock has made a steady, well-documented, recovery to near pre-commercial exploitation levels.

Unlike the vast majority of the roughly 5,000 species of mammals alive today, all whales spend their entire lives in water, make the longest migrations, and some can reach the largest body sizes of any mammal group known to have lived. Yet even among whales, bowheads have developed extreme adaptive traits that set them apart from other whales. Such adaptive traits include the ability to capture extremely small prey, and the ability to live to a great age — approximately twice the lifespans of modern humans.

Genetic and fossil studies suggest that bowheads (genus Balaena) diverged from right whales (genus Eubalaena) 7-10 million years ago. At that time, the world’s oceans were several degrees warmer than today, and there was no sea ice in the Arctic. Around 2-3 million years ago, the planet cooled, and the Arctic Ocean developed sea ice cover. Living within sea ice led to unusual traits of bowheads, including the lowest body temperature of any whale (about 92ºF or 33.3ºC), the longest baleen (14 feet or 4.3 meters), the latest age of sexual maturity (approximately 25 years), and a lifespan of about 200 years. Sea ice also divided the population into four current stocks spanning from the Okhotsk Sea across Arctic Alaska and Canada to the North Atlantic near Svalbard. The BCB stock frequents the Arctic Alaska coast migrating between the Bering and Beaufort seas.

Other whale species migrate north and south between low-latitude feeding grounds and high-latitude breeding grounds, but bowheads do not. Although bowheads do migrate seasonally, it is a relatively short migration, and all but the Okhotsk Sea stock of bowheads live their entire life in arctic and sub-arctic waters. They bear young in freezing ice-choked seas, a remarkable achievement in itself. Alaska bowheads migrate to western Canadian Arctic waters, which they abandon each autumn, as the sea ice thickens, and the bowheads’ prey descends to overwinter in deep water. The whales spend the winter within the ice in southern parts of their range. They continue to feed through winter and are the only baleen whale routinely to do so.

Life in cold ice-covered seas and reliance upon relatively low prey abundance appear to have shaped the bowhead into the animal we recognize today. Their flukes, flippers and tongue have countercurrent heat exchangers that enable bowheads to retain body heat during cold periods and to cool them when necessary. Their blowhole is located atop the head, which is highly reinforced, allowing adult bowheads to break through sea ice to breathe. These adaptations, together, result in an animal superbly well-tuned to living in ice-covered seas.

J.C. “Craig” George, Ph.D., recently retired as a research biologist with the North Slope Borough’s Department of Wildlife Management in Utqiagvik. J.G.M. “Hans” Thewissen, Ph.D., is on the faculty of the Northeast Ohio Medical University in Rootstown, Ohio. They co-edited the 2021 book, “The Bowhead Whale Balaena mysticetus: Biology and Human Interactions.”