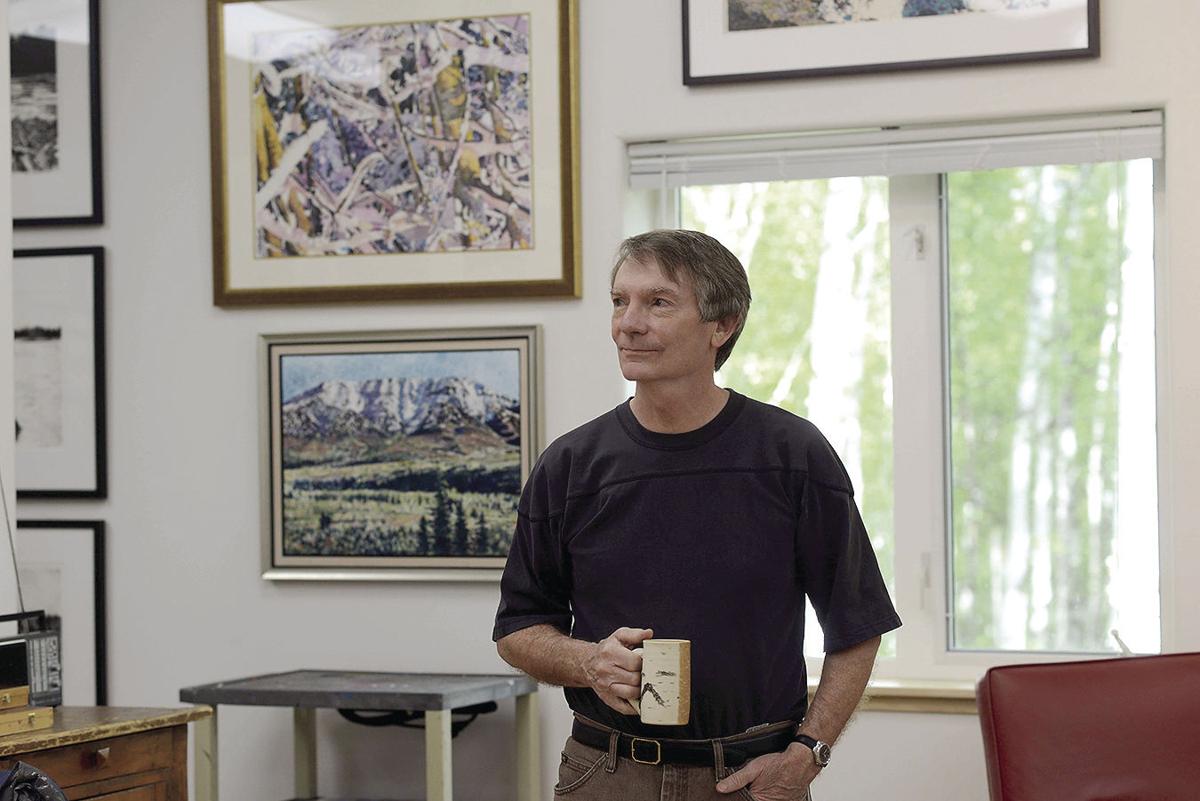 Fairbanks artist Kes Woodward arrived in Alaska in 1977 and has made his home in the state since. Courtesy Kes Woodward 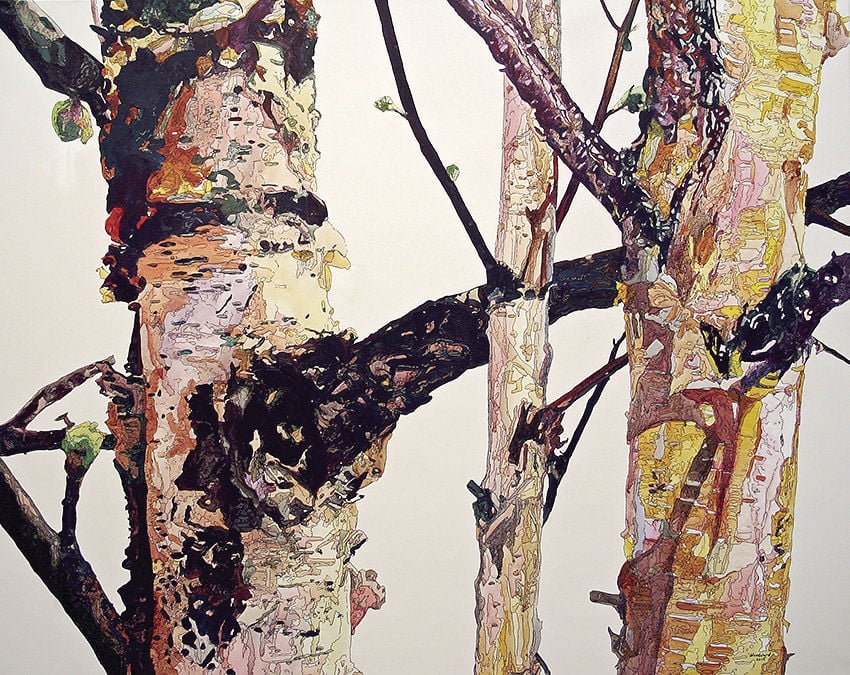 Kes Woodward developed a style where, from afar, his paintings look like highly colorful renderings of nature but as the viewer approaches the painting, new details keep emerging. Courtesy Kes Woodward

Fairbanks artist Kes Woodward arrived in Alaska in 1977 and has made his home in the state since. Courtesy Kes Woodward

Kes Woodward developed a style where, from afar, his paintings look like highly colorful renderings of nature but as the viewer approaches the painting, new details keep emerging. Courtesy Kes Woodward

Woodward began his career as an abstract artist and only started incorporating recognizable imagery into his work after coming to Alaska. He developed a style where, from afar, his paintings look like highly colorful renderings of nature. But as the viewer approaches the painting, new details keep emerging, until, upon close inspection, intricate layers of abstraction reveal themselves.

“From a distance, things that look like one color in my paintings, when you get up close you realize they’re full of a hundreds different colors,” Woodward explained. “A green leaf will have a couple of dozen different greens and yellow greens and blue greens and little flecks of contrasting complimentary reds and purples. That’s the same kind of thing I thought about all the time I was an abstract painter, but I apply it now to the thing I most love which is the boreal forest more then anything else. The circumpolar north in general and the boreal forest in particular.”

Becoming an artist was not something Woodward intended. He grew up in Aiken, South Carolina, on a farm that has been in his family since before the Revolutionary War. Owing to the proximity of the Savannah River Site, a U.S. Department of Energy nuclear reservation, his childhood classmates were the offspring of physicists and engineers. Thus, he said, “I was a math and science nerd.”

Woodward wasn’t truly exposed to art until he entered Davidson College. There he went on a blind date with Missy Boaz, an art major, who he immediately fell in love with. They were soon married. She introduced him to a world he hadn’t known existed and took him to the National Gallery of Art in Washington, D.C., where, he recalled, “There were those things in there that were the most beautiful things I had ever seen in my life. I stood in front of every single one of them and took them in. I thought, even trying to do something along these lines would be enough of a life’s work for me. So I never looked back.”

Woodward switched his major to art. By good fortune, one of his teachers was the now nationally esteemed abstract artist Herb Jackson. “He became my inspiration and mentor. He convinced me partly by example and partly by instruction that this was something a bright young ambitious person might want to do with his life, and that if I chose to do it I could.”

Woodward said Jackson offered the most important advice he’s ever received: “You don’t say, one day I might be an artist. The day you pick up your materials and you start making art, you’re an artist.” In his own subsequent career as an art professor, as well conversations, Woodward said this is the message he always conveys.

After finishing his master’s at Idaho State University, Woodward spontaneously flew to Juneau, where there was a curator position at the Alaska State Museum he hoped to take.

As with art, moving to Alaska was something Woodward never looked back from. “As Missy always said, since then my body has strayed out of Alaska a number of times, but my heart’s never faltered.”

The next few years were transitory. Woodward moved to Anchorage to work for the Visual Arts Center of Alaska, then returned to Juneau and the State Museum. Then Missy, who had been a full time potter, decided to attend medical school. She first needed to take additional classes, including organic chemistry. Since the only place in the state she could do this was at the University of Alaska Fairbanks, the couple moved here in 1981. Woodward joined the faculty of the art department, where he remained until retiring as professor emeritus in 2000.

In his nearly 40 years in Fairbanks, Woodward has been involved in local and statewide arts advocacy on too many levels to count. He was appointed to the Alaska State Council on the Arts in 1983, where he served until this year when Gov. Mike Dunleavy replaced him. Since the recent shuttering of the Council through budget veto, Woodward has joined with artists and patrons across Alaska hoping to get it re-established. He’s deeply concerned about Alaska now being the only state in the nation without state support for the arts.

Missy Woodward, who became a popular Fairbanks pediatrician, died unexpectedly of a heart attack in 2010. Three years later, Woodward married flutist Dorli McWayne. The couple make their home in the hills outside of town, where Woodward works most days in his studio.

Talking about art as a vocation, Woodward concluded, “Every single time you start a painting, you have this beautiful white canvas. It’s perfect in every way. And the first mark you make destroys that perfection. You make noise, and your whole task is to try to bring it back in the end to something as close to that initial perfection as you can. And you never do. And that’s what makes it so endlessly worth doing for a lifetime.”

Learn more about Kesler Woodward and his artwork at www.keslerwoodward.com.