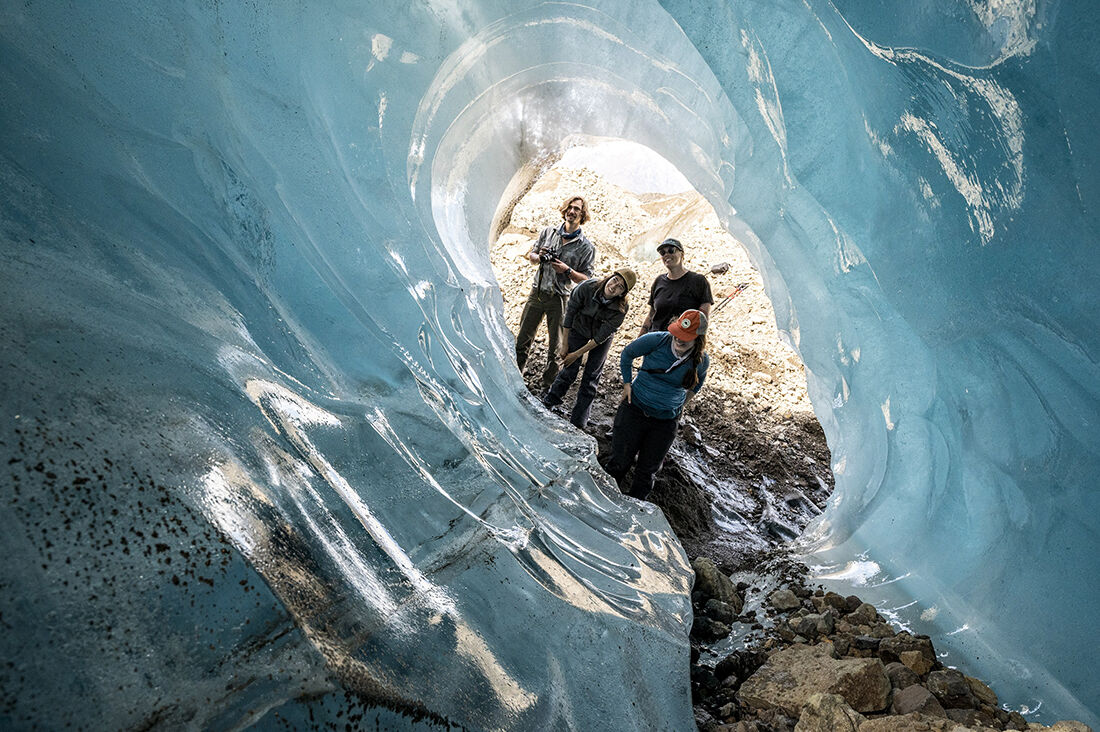 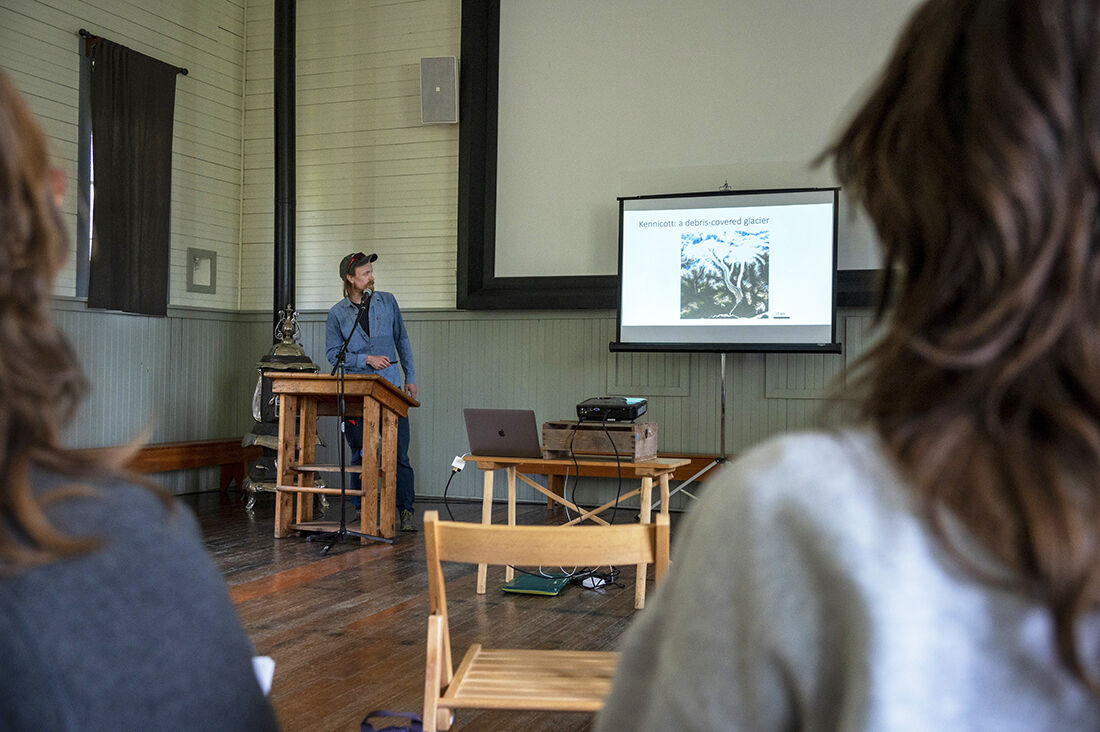 Eric Petersen gave a well-attended presentation in the Kennecott Recreation Hall outside McCarthy about the research he and his research team were doing. 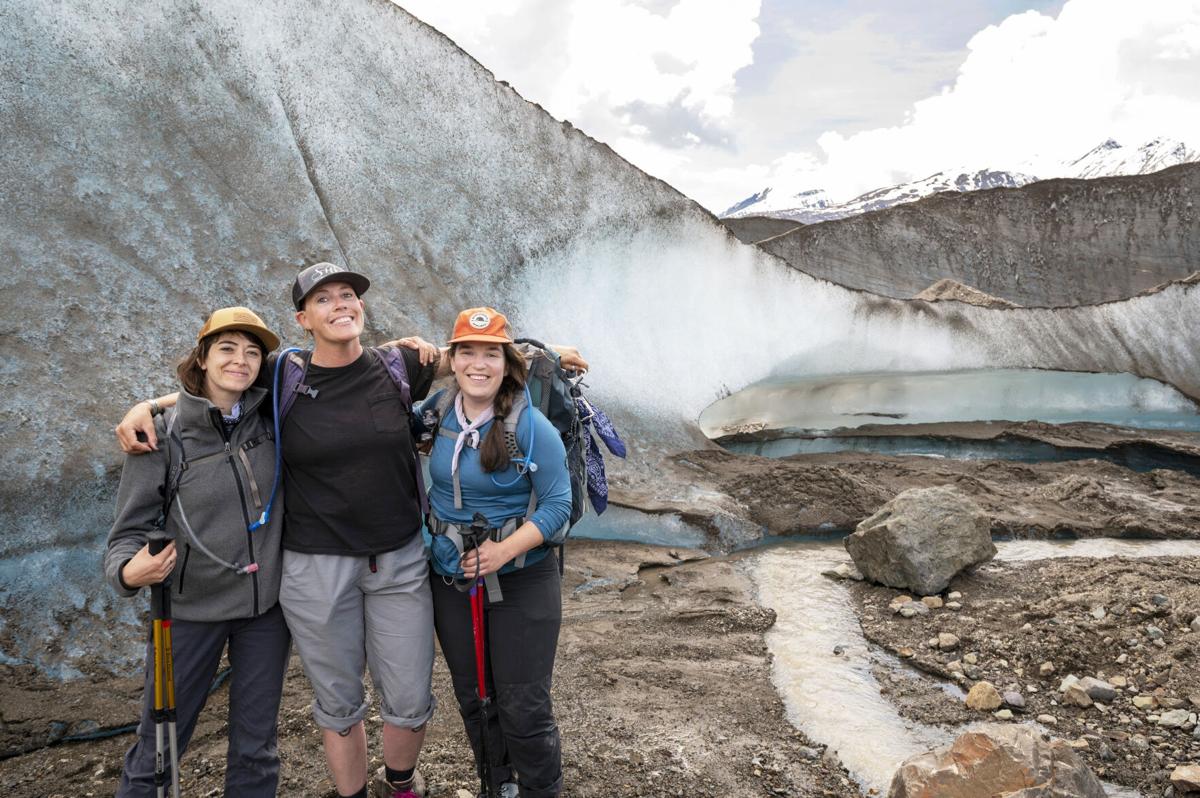 The artists of the Erratics Project on the Kennicott Glacier. Left to right, Tyler Rai, Nina Elder and Hannah Perrine Mode. 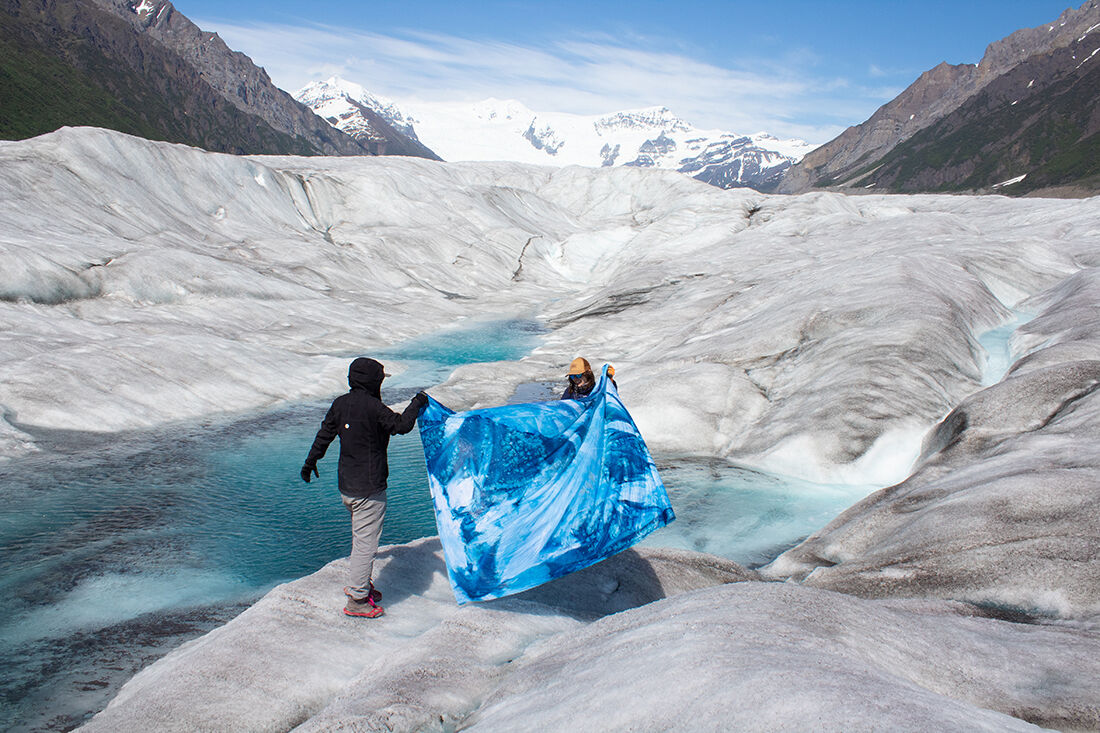 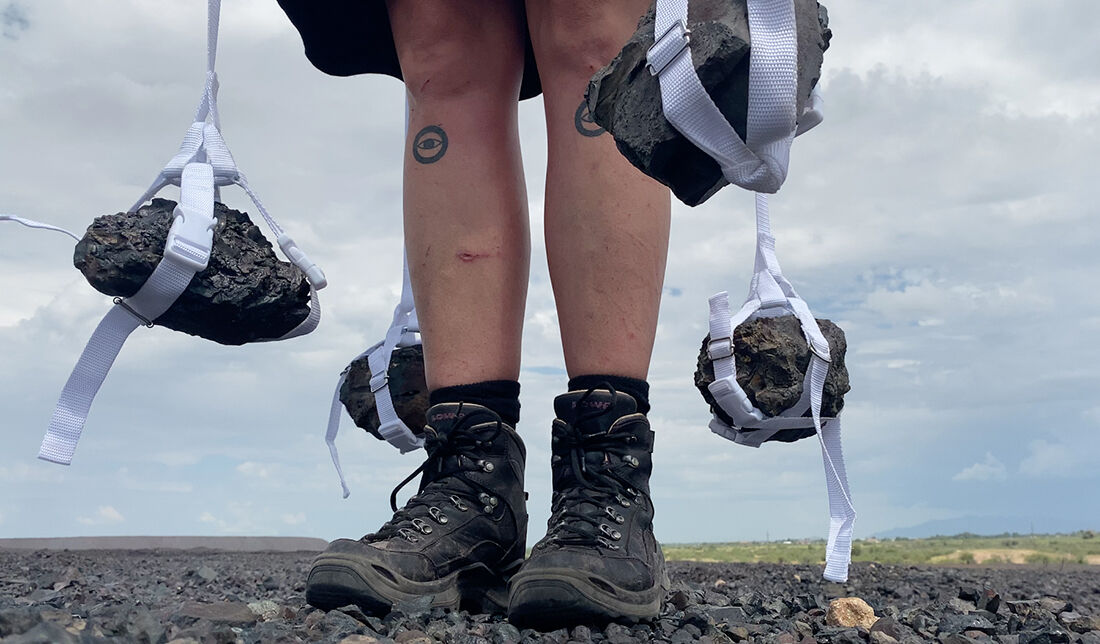 Artist Nina Elder carries rocks — toxic mining slag that was dumped at the U.S./Mexico border as a barrier — as part of an art project inspired in part by her time on the Kennicott Glacier in Alaska. 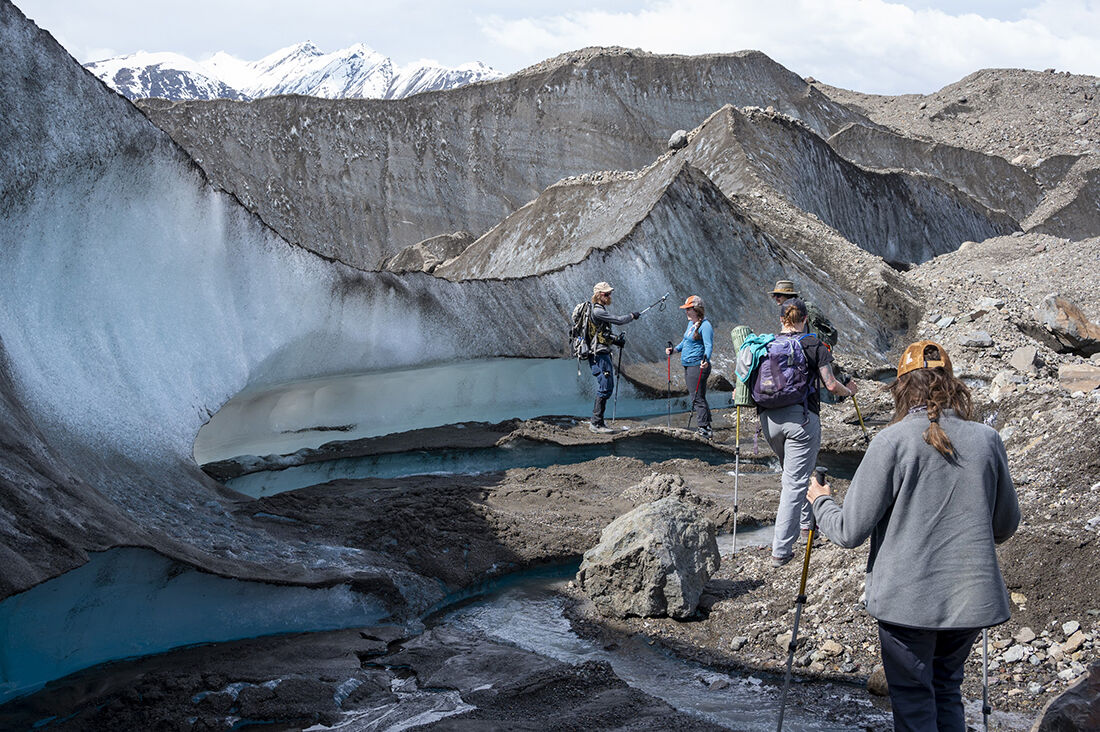 Eric Petersen explains to Hannah Perrine Mode and the rest of the group some of the processes they're observing on the Kennicott Glacier.

Eric Petersen gave a well-attended presentation in the Kennecott Recreation Hall outside McCarthy about the research he and his research team were doing.

The artists of the Erratics Project on the Kennicott Glacier. Left to right, Tyler Rai, Nina Elder and Hannah Perrine Mode.

Artist Nina Elder carries rocks — toxic mining slag that was dumped at the U.S./Mexico border as a barrier — as part of an art project inspired in part by her time on the Kennicott Glacier in Alaska.

Eric Petersen explains to Hannah Perrine Mode and the rest of the group some of the processes they're observing on the Kennicott Glacier.

A random meeting between a scientist and an artist in the remote and quirky village of McCarthy, Alaska, last year led to new ways to communicate with the public about rapid changes occurring on the Kennicott Glacier.

Glaciologist Eric Petersen from the University of Alaska Geophysical Institute met artist and arts administrator Nina Elder during his summer field work on the Kennicott in 2020. Petersen’s team planned to continue their research in summer 2021 and Elder reached out to Petersen last spring saying she would also be back in McCarthy. Since there was an overlap, they planned an art and science collaboration.

Elder is part of a three-person artist’s collective named Erratics. The other two members of the Erratics collective are dancer and movement artist Tyler Rai and photographer and visual artist Hannah Perrine Mode. The name Erratics is a riff on glacial erratics — glacially deposited rocks differing from the type of rock native to the area in which they rest. The group’s web page describes erratic as moving with inconsistency, to wander.

The web page introduction to the project states that “We carry with us pieces from science, visual art, performance, scholarship, traditional knowledge, feminism, and climate communication, like a glacier picks up boulders and pebbles.”

This summer was the first time the three artists were able to work on a project in McCarthy together. Rai lives in Rhode Island and this was her first time in Alaska. Mode is loosely based in California, but has been coming up to Alaska for the past five years in the summer to work with the Juneau Icefield Research Program on their leadership team and as an art instructor. She does a lot of the art and science communication curriculum with JIRP throughout the year. This summer was her first time in south-central Alaska and McCarthy. Elder divides her time between New Mexico and Alaska, and is involved in several endeavors across the country. Most recently she’s been working on projects with the Anchorage Museum.

Petersen said that as he and Elder discussed potential collaboration they started sharing ideas about different ways that they see and experience the landscape.

“As scientists we have our own language, but not everyone else understands it,” Petersen said. “Art is a different way to look at the research.”

Scientific teams are often based in McCarthy while conducting studies on the rapidly changing glaciers of the Wrangell-St. Elias National Park which surrounds the town.

“There’s this incredible community of artists that every summer hosts all the scientists and those lines get so blurred,” Elder said.

Although the Kennecott copper mines closed in 1938, according to the National Park Service substantial deposits of mill tailings and environmental contamination remain in some areas close to the mines.

Petersen first came to McCarthy in 2014 to do Mars analog site field studies while working on a doctorate in the geosciences at the University of Texas at Austin. Now a research associate at the Geophysical Institute specializing in debris-covered glaciers, he continues to investigate glaciers in the area.

“My research has to do with investigating surface changes on the debris-covered glaciers,” Petersen said. “There are two parts of what’s happening with the glacier that is affecting deglaciation and ice melt rate: melt reduction from rocky debris blanketing the ice, and melt enhancement from back-wasting — thawing or wearing away — of exposed ice cliffs.”

The three artists joined Petersen’s team of Cameron Markovsky, a summer intern with the UAF Arctic Research Experience for Undergraduates, Anna Thompson of the National Park Service, and Julian Dann, an interdisciplinary master’s student at UAF. The group spent eight days together camping next to the glacier. The artists spent part of their time observing the scientists and learning about the glacier and the experiments underway. They also made sketches, kept notes and discussed the implications of what they were learning, particularly in the context of climate change. The scientists conducted field studies and collected data on the glacier’s melt rate, changes in the debris layers over the ice, the rate of ice cliff backwasting, weather conditions and other parameters.

“We also think of ourselves as researchers,” Mode said. “We got to do more hands-on research about the glaciology of the area with Eric and his team.” They also learned about the history of the region, thanks to Elder’s long connections to McCarthy. Mode said they were operating “kind of in the middle of the trifecta of glaciology, community and art.”

“With field scientists you come into this thing where there’s this problem of access, where a lot of people can’t get out and do field research,” Elder said. She pointed out that many people don’t have funding to get out to remote field locations, or they don’t have the mobility to scramble over the sometimes challenging terrain.

“I think approaching it through a community and creative lens broadens some of that space out a little bit. That’s something we’re all really interested in doing — demystifying some of the science, making climate change something that we can feel in our hearts, and then being able to share that story.

“Even though I’ve lived in McCarthy, I often have no clue what my scientist friends are doing because it’s so inaccessible, or it’s so abstract, or it’s so devastating that it’s just too hard to wrap your head around,” Elder said.

Partly to respond to these kinds of perceptions, Petersen gave a presentation in the Kennecott Recreation Hall outside McCarthy about the research he and his team were doing.

“I was so inspired by Eric’s talk,” Elder said. “It was standing room only. I just have to say that in a town of 48 people, 500% of the population shows up for a science talk!”

Since their time on the Kennicott the artists have carried what they observed and learned in Alaska into their creative endeavors. Nina Elder made a video she says was largely influenced by the artists’ time on the ice.

“I was moving toxic mining slag that has been dumped as a barrier on the U.S./Mexico border by cradling it to my body. It was a consideration of the innocence of rocks and how humans often do not move beyond exploitation in our relationship with them.”

Tyler Rai, who is a movement-based performance artist, has a fluid sense of when her art is complete.

“It all sort of just keeps flowing,” Rai said. “The ice certainly influenced the work I made on Governors Island (in New York Harbor) this summer about tides and sea-level rise.

“It’s been a really interesting feat to try to integrate what I experienced in Alaska, like the hydrology and changing landscape of the ice, and trying to translate how it’s connected to the waters that I’m surrounded by on Governors Island. I’m really attracted to these huge phenomena — melting glaciers and rising waters.”

“We’re also going to be compiling a publication of our fieldwork and research in McCarthy as a method of output and connecting to others. We are in the process of sharing and compiling our audio recordings, videos, photographs, pieces of writing. I’m scanning some of my sketchbook entries and my notes from Eric’s glaciology lecture.

“It’ll be a mix of science and history, our own art, and our emotional processes and practices. We will be able to share that but it’s not ready yet,” said Mode.

“Cyanotypes are one of my primary [artistic] practices. I made a couple pieces when we were out there, then we decided to make one together. Then we cut up one, it’s a big fabric piece. Each of us now has a piece that we’re incorporating into our own practices in some way.”

“It was powerful,” Dann said. “The cyanotype embodied the movement of water and sun that created it, and those forces in turn also shape the glacier. I thought it was really cool to make the glacier an active participant in the art.”

After all, he said, in order to create the fabric cyanotype, the artists wrapped it around an erratic.