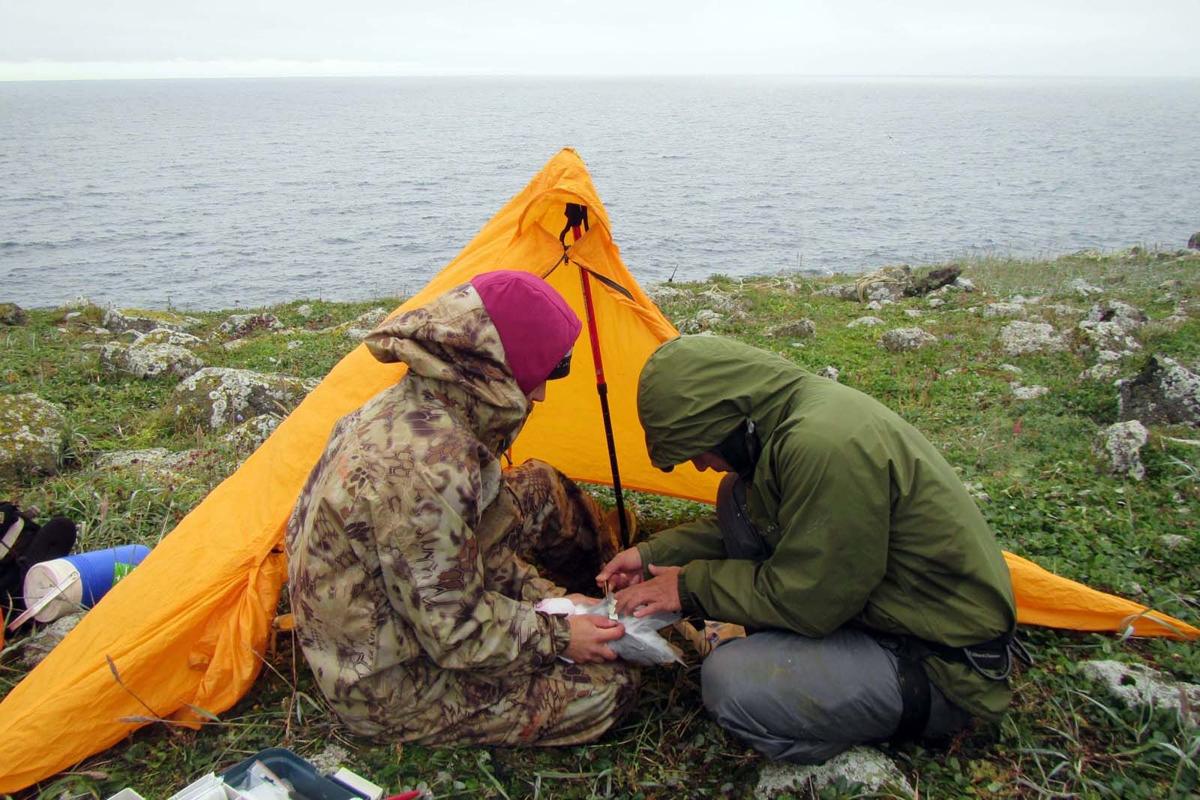 Akinori Takahashi, a seabird researcher and co-PI from Japan's National Institute of Polar Research, and Alexis Will attach a GPS tag to a black-legged kittiwake. The GPS tags track where birds forage during the summer and are able to record data only for a few days. 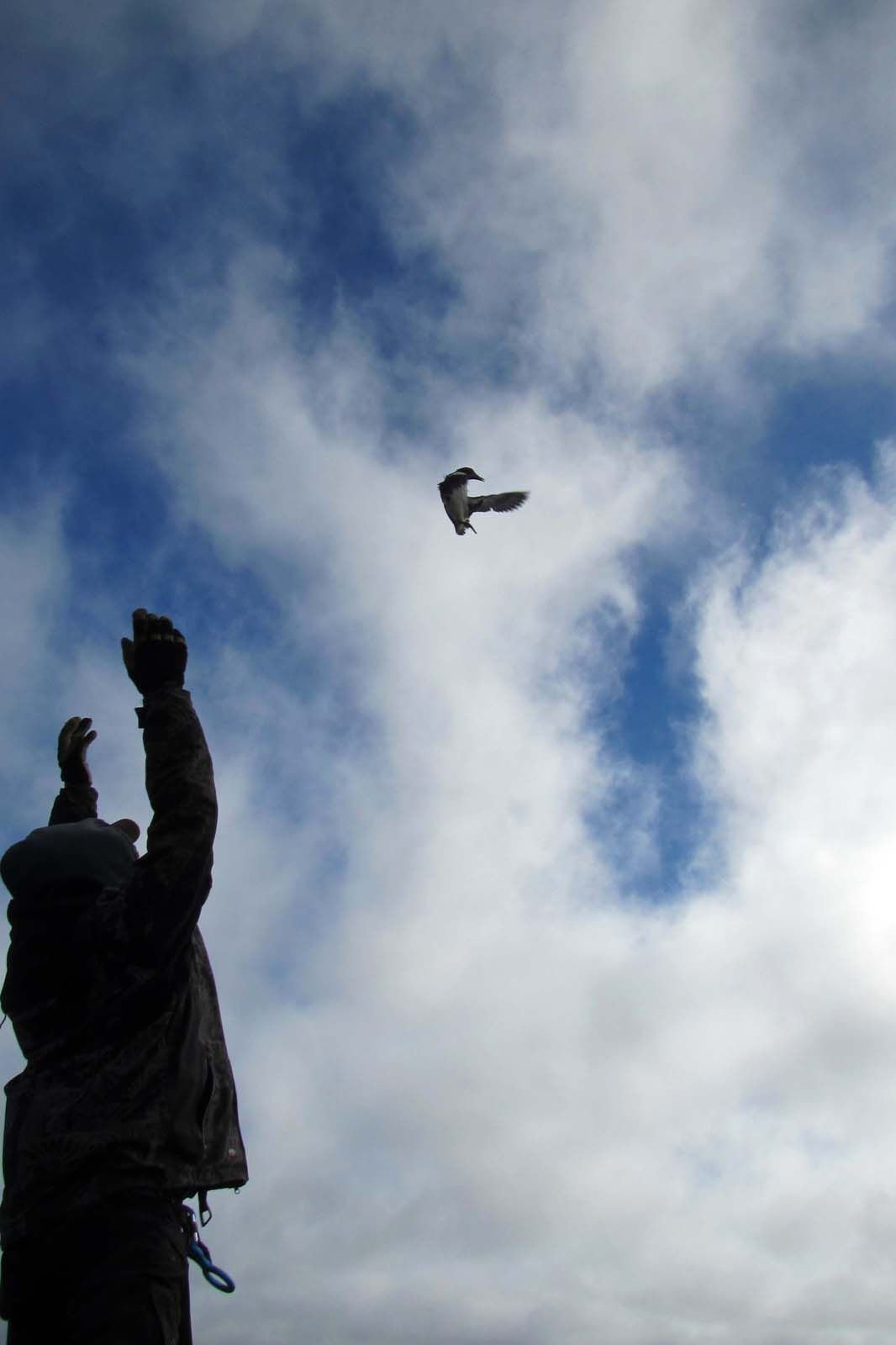 Michael Toolie of Savoonga releases a murre after sampling for blood and feathers and attaching a geolocator tag which will record information used to calculate the bird's movement during its winter migration. 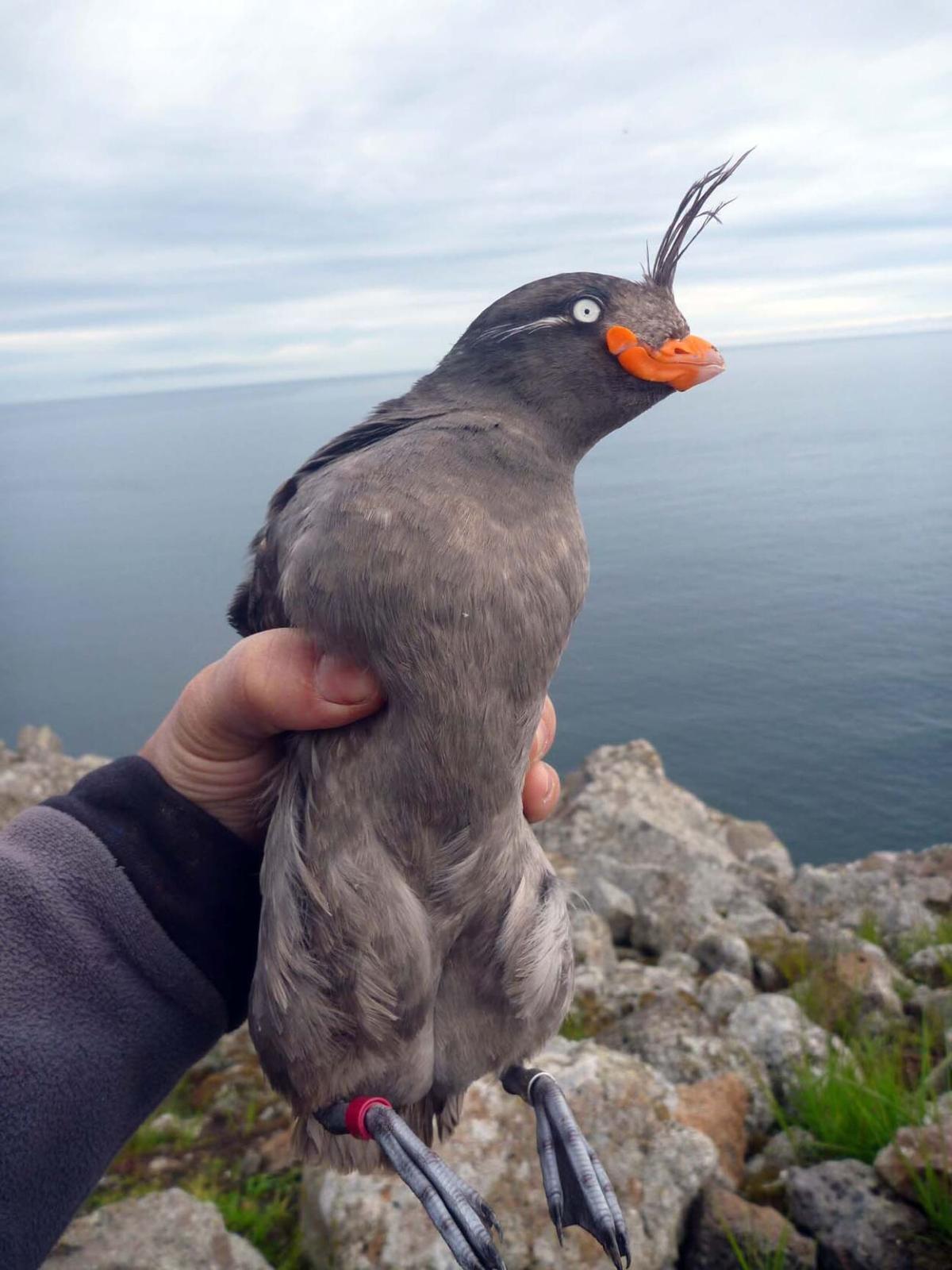 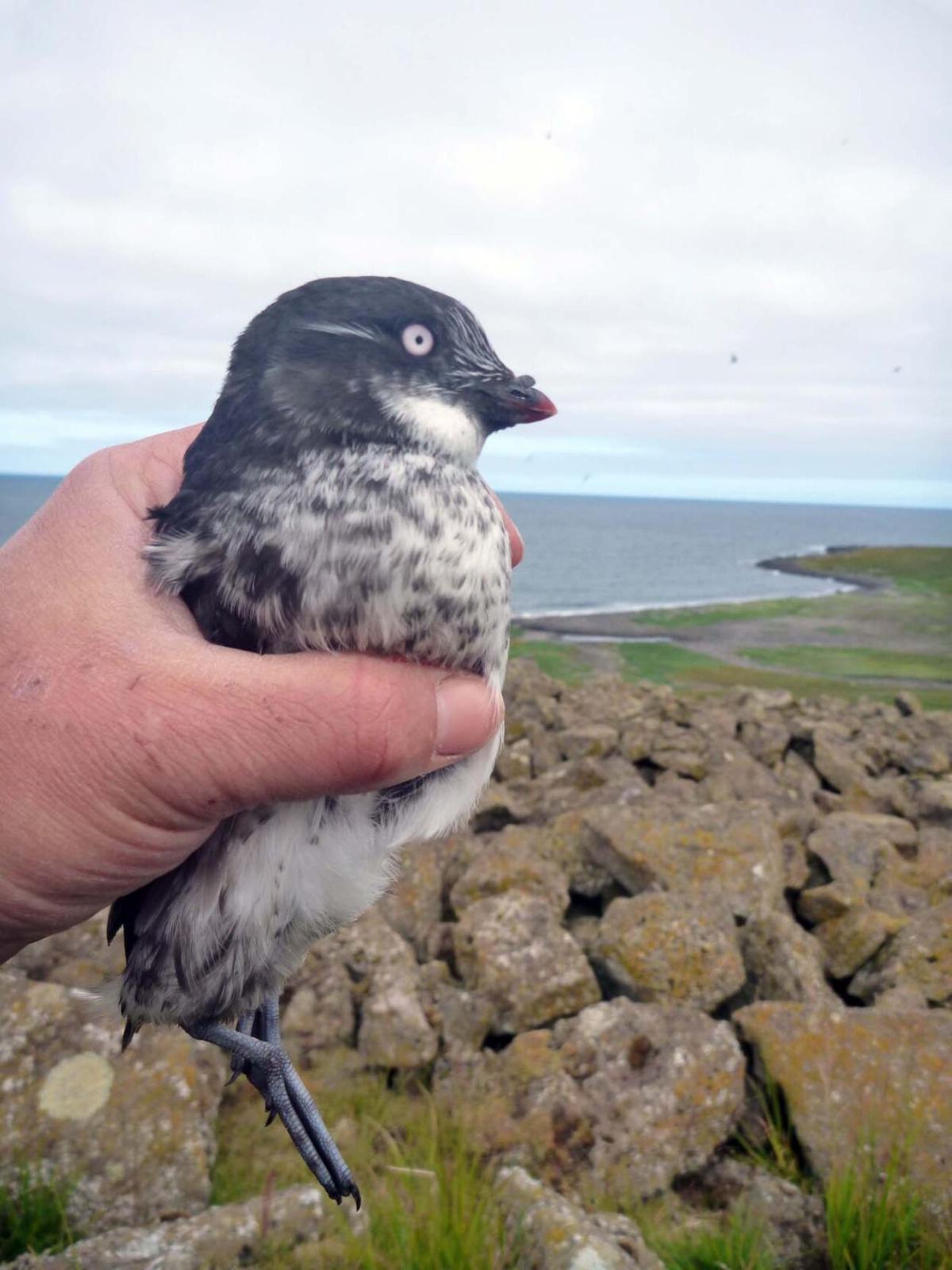 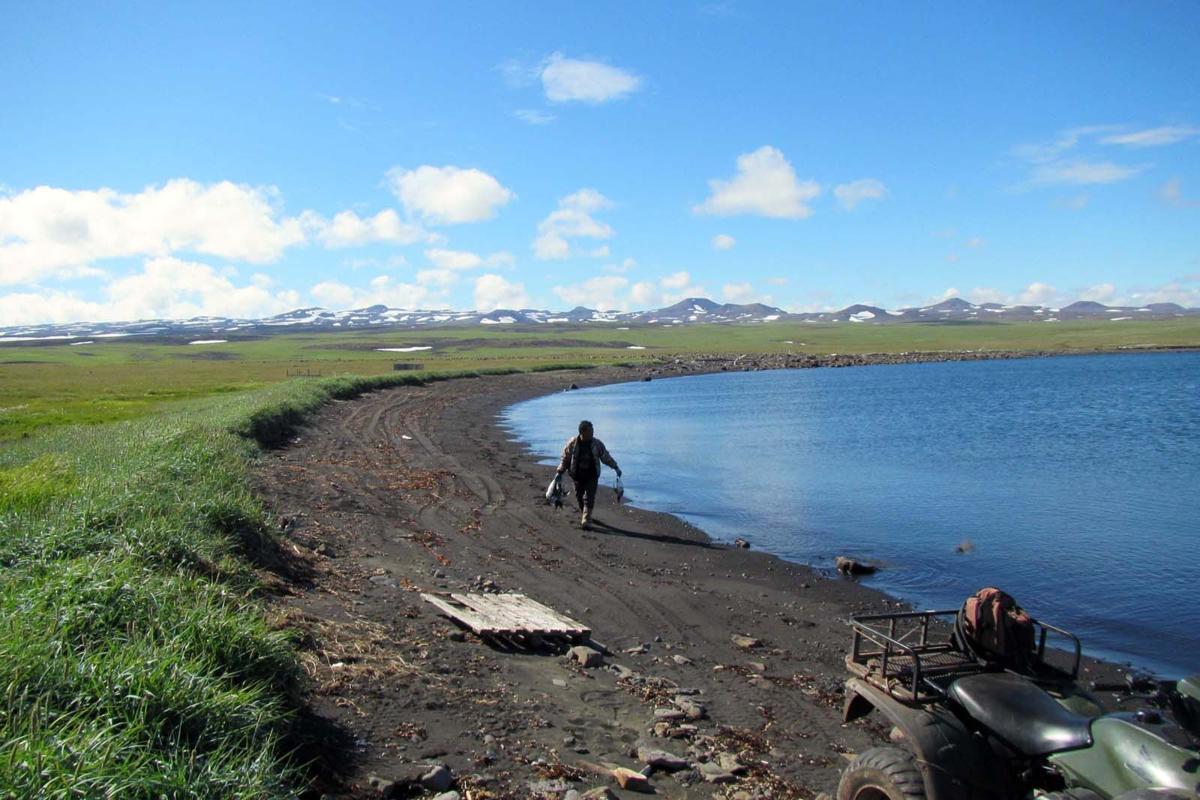 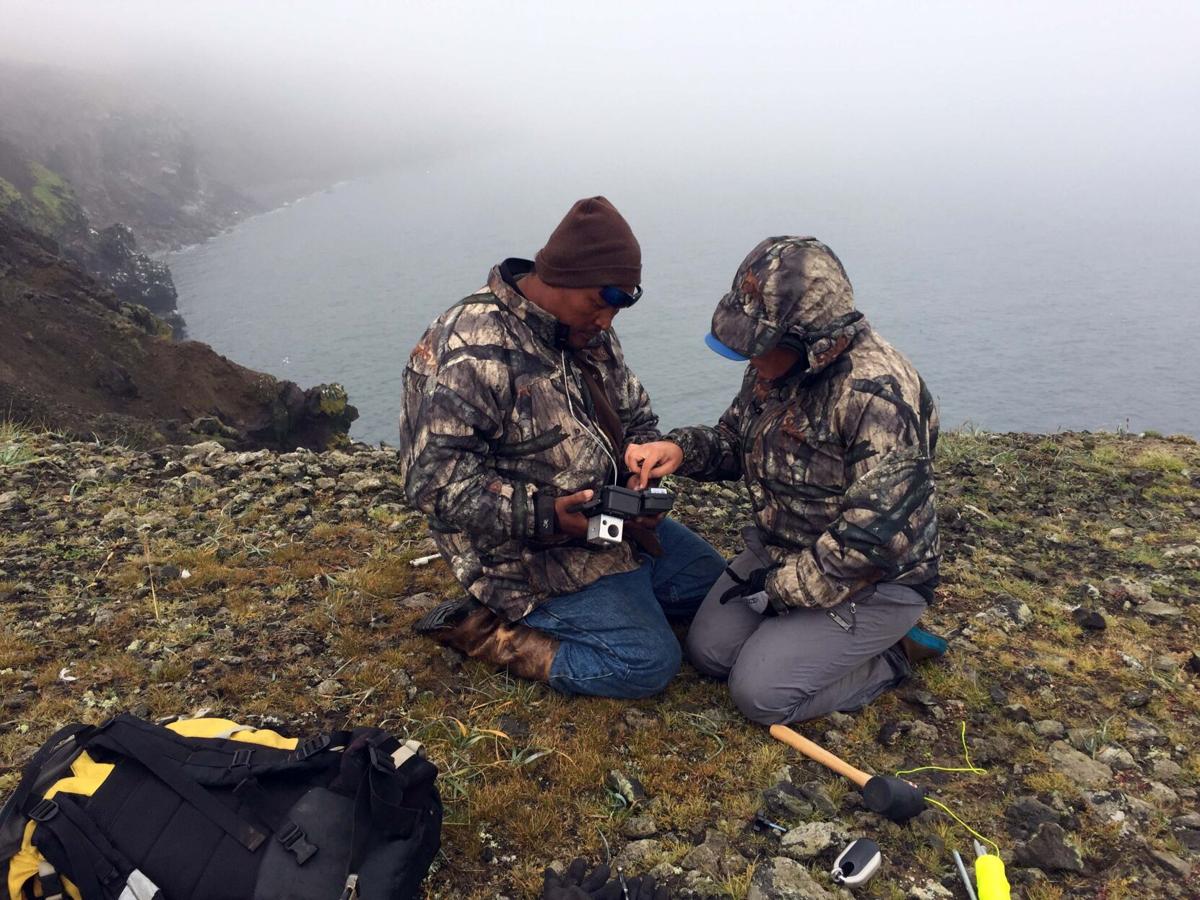 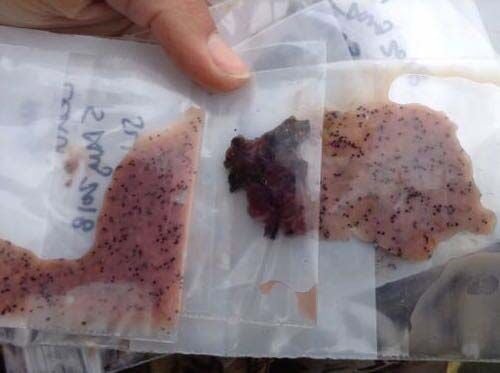 Regurgitations — bird vomit — collected from auklets returning to the colony to feed their chicks give a window into zooplankton conditions as seen through seabird eyes.

Akinori Takahashi, a seabird researcher and co-PI from Japan's National Institute of Polar Research, and Alexis Will attach a GPS tag to a black-legged kittiwake. The GPS tags track where birds forage during the summer and are able to record data only for a few days.

Michael Toolie of Savoonga releases a murre after sampling for blood and feathers and attaching a geolocator tag which will record information used to calculate the bird's movement during its winter migration.

Regurgitations — bird vomit — collected from auklets returning to the colony to feed their chicks give a window into zooplankton conditions as seen through seabird eyes.

Whether the sun is shining or the fog is covering the Bering Sea with a shroud, Punguk leaves his house at 9 a.m. and walks until night along the rugged cliffs of St. Lawrence Island.

Punguk Shoogukwruk studies seabirds: black-legged kittiwakes, thick-billed and common murres, as well as crested and least auklets. As an on-island researcher and tribal member, he helps University of Alaska Fairbanks researchers collect data— a common practice during the pandemic.

In 2020, Covid-19 travel restrictions made field trips to the Bering Sea impossible. To keep research going, coastal community and tribal partners provided information to the scientists.

“Last year my responsibilities grew a little bit because of the pandemic,” Shoogukwruk said. “I needed to get all the samples I could — from taking feather samples to oral samples ... I was collecting everything except for blood.”

Shoogukwruk counted kittiwakes nesting and brooding with chicks, went down cliffs to observe murre colonies and walked on boulders searching for auklet nests, sometimes crawling on his hands and knees to look into the crevices. He said that capturing the murres for sample collection was his favorite part.

“I had to be very stealthy to trick them,” he said. “But we know how to sneak on the birds. I learned that while they are nesting, they don’t want to leave their nests; they hold on to them long enough to capture them.”

What happens to seabirds on the Bering Sea

Shoogukwruk’s observations and data collection helped survey birds for avian influenza. Besides that, the work was a continuation of the multiple-year-long study on how seabirds are responding to the loss of sea ice in the Northern Bering Sea, explained a co-investigator of the research and UAF postdoctoral fellow, Alexis Will.

“All seabirds migrate out of the Arctic and then return in spring, and we were curious whether the loss of sea ice will open a new habitat for them so they could stay longer, or maybe it wouldn’t matter,” she said. “Of course they are also able to adapt and modify their behavior.”

The researchers concluded that sea ice loss affected different birds differently: it challenged kittiwakes and common murres who eat fish and auklets that rely on zooplankton, but didn’t affect thick-billed murres who forage on benthic fish. Since benthic organisms dominate the northern Bering Sea, the changes in sea ice have not led to reorganization of the ecosystem, according to the research abstract.

Counting the birds and chicks, as well as measuring stress hormones helped scientists measure nutritional stress, Will explained. Chicks leaving the nests early was another sign of starvation, Shoogukwruk added.

How researchers collaborate with tribal sentinels

Collaborating with Shoogukwruk to learn about his observations and coordinate sample collection “worked really well,” Will said, even though “the mail was incredibly slow.” At the end of each day researchers would check in, discuss the work that has been done, and plan for the next day.

“We’ve worked with him in the past, and he was already serving in the capacity of a guide,” Will said. “We already relied on his expertise in making decisions where to go and what work to do. We were trusting his observations on whether or not it was worth it to make another trip to a certain location based on what he had seen and how the birds were behaving.”

Shoogukwruk and his community rely on seabirds for meat and egg harvest, and observing the birds and collecting samples from them made sense to him — as did being out in nature.

“That’s what we do anyway,” he said. “We live a subsistence lifestyle, so it feels natural.”

Will explained that collaborating with communities to analyze seabird behavior is a logical solution: “They rely heavily on seabirds for food, they are interested in the topic, and they are knowledgeable in sea bird biology,” she said.

In 2020, there was a push encouraging scientists to collaborate with community and tribal partners to continue the research work, she added.

“The message was, ‘Please don’t come, but remember that you have resources here,’” he said.

Heather McFarland, the communications lead for the International Arctic Research Center, agreed that this was a consistent theme.

“Scientists collaborated extensively with local people and entities to make sure that monitoring continued through the pandemic,” she wrote in an email to the News-Miner.

The U.S. Fish and Wildlife Service was unable to conduct field research in several areas last year, and neither did other organizations across the state, including Ecosystem Conservation Office Aleut Community of St. Paul Island.

“Our department was able to collect and document observations from our Island Sentinels, our environmental professionals who are tribal members, subsistence hunters and traditional knowledge holders of seabirds, sea ducks and gulls in the Pribilofs,” wrote in an email Dr. Lauren Divine, the director of the office. “They kept a running log of how things were progressing during the summer season with regards to our seabird populations. (...) These were the best and only information we have about these species in the Pribs for 2020.”

Paul Melovidov and Aaron Lestenkof are Indigenous island sentinels for the Aleut Community who, among other things, gather data on seals, ducks and gulls, and how the seabirds’ behavior shifts. According to the Bering Science report, Sentinels notices how migrating birds are not returning back to the island and seabirds that usually leave for winter are sticking around a little longer.

With the environment changing so rapidly, Will said scientists can’t rely on four-year projects when researchers from outside travel on field trips once in a while. Instead, more consistent research should be done “by people who care the most about what’s happening.”