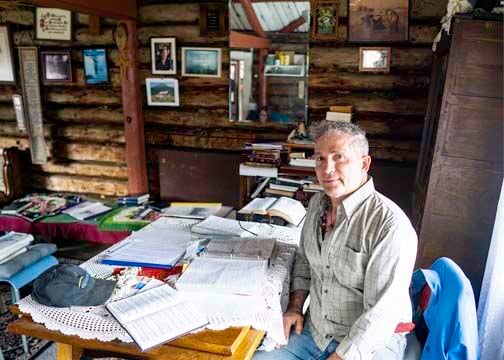 Jack Reakoff sits with a binder of his mother’s archived sermons at Kalhabuk Chapel following a Sunday service in Wiseman. 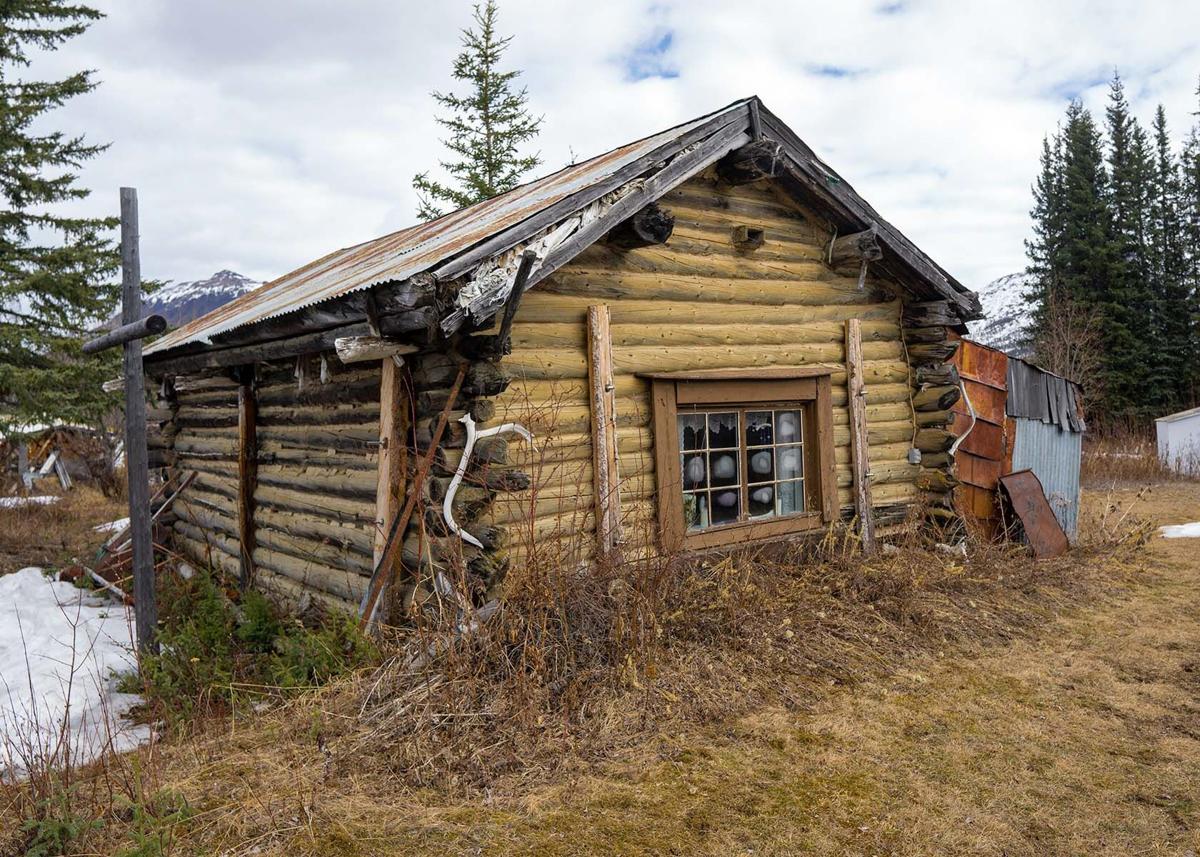 The Kalhabuk Chapel in Wiseman was built in 1915. 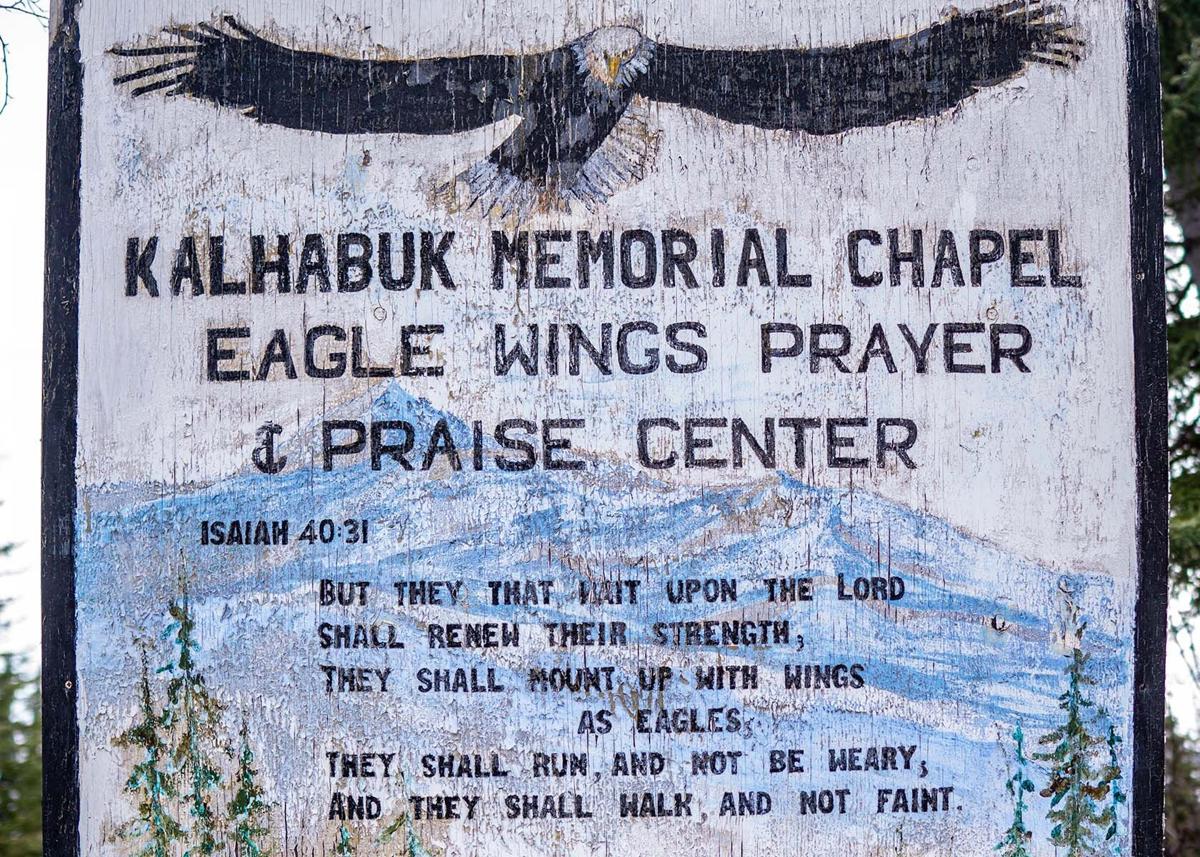 The Kalhabuk Chapel sign shows its age and history. 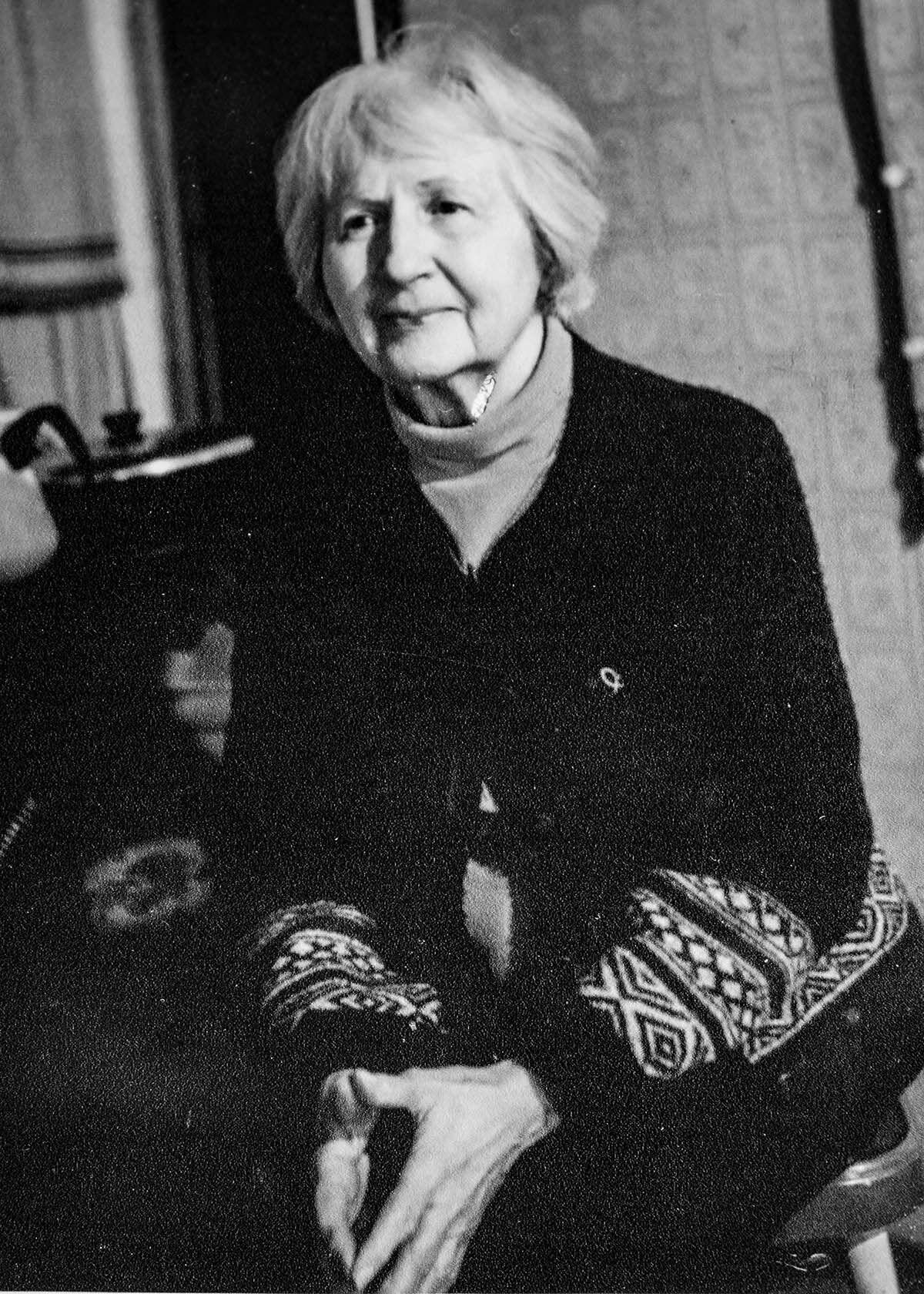 June Reakoff refurbished an old cabin in Wiseman that went on to be the community chapel. She started offering a weekly Bible message to the faithful in the community, and she continued that for nearly 20 years until she passed in 2014.

Jack Reakoff sits with a binder of his mother’s archived sermons at Kalhabuk Chapel following a Sunday service in Wiseman.

The Kalhabuk Chapel in Wiseman was built in 1915.

The Kalhabuk Chapel sign shows its age and history.

June Reakoff refurbished an old cabin in Wiseman that went on to be the community chapel. She started offering a weekly Bible message to the faithful in the community, and she continued that for nearly 20 years until she passed in 2014.

On the 414 mile of the Dalton Highway that runs from Livengood, across the Arctic Circle, over the Brooks Mountains and down the North Slope to the sea, there is only one house of Christian worship. The unpretentious Kalhabuk Chapel stands on the edge of the Gates of the Arctic National Park at the village of Wiseman.

The chapel has served the village as a meeting place across the generations. Currently, every Sunday, longtime resident Jack Reakoff reads a weekly message in the ancient 18-foot by 24-foot cabin that was built in 1915 by Inuit Chief Big Jim.

Several threads of Brooks Mountain history are woven into this cabin. It’s origin was captured by Robert Marshall, who left us with an excellent view of its warmth from the early days. Marshall was one of the first white explorers of the Brooks and a conservation advocate. He led the effort to establish the Gates of the Arctic Wildlife Preserve. In the 1930s he wrote the book, “Arctic Village: a Portrait of Wiseman.” He told outsiders about the habitat and people of the northern-most mountains.

To introduce his readers to the Inupati, he wrote the chapter, “An Evening at Big Jim’s.”

He told of the older women sitting on one side talking and working skins, and the men on the other side all conversing with jokes and stories. When Big Jim would bring out his drum and start playing the rhythms of traditional Inuit songs, and all would sing together. Mitchell wrote that Jim’s cabin became “The center: social, spiritual, and economic, of the Native population of Wiseman. I think the economic is the most important. For Big Jim, due to his raw energy and experience, has generally had more food and more worldly wealth than the other Natives. With the Eskimo custom of potlatching (dividing up whenever one has more than the others) Big Jim has sometimes been the chief support of the entire Eskimo community ... Jim is wise, kind and without favoritism, so it is quite natural that he should be the leader, and his large, clean cabin the communal center of the Eskimos in Wiseman.”

Reakoff said Big Jim was from the area near Selawik. Quakers in the area did not establish villages but sought out Inupiaq camps. Jim encountered Quaker missionaries around Kotzebue in trading areas. He converted to Christianity in Wiseman, and Marshall quoted him saying of his faith that he liked the “God business right away.”

He did not necessarily go around as a minister. He would facilitate missionaries like Louisa Pingle, who would lead Sunday School at his cabin, Reakoff said.

Big Jim did not pass away in Wiseman but moved to a lake northeast of the village to be able to fish and subsist easier in his old age. He passed the cabin on to his relatives, including niece Kalhabuk, also known as Florence Jonas, for whom the chapel is named. Marshall described her as a youthful mother of four and the most powerful woman, who could beat three out of four men, but she was the most placid of mortals and takes everything that comes with good humor.

Kalhabuk became known to the following generations as Grandma Jonas, and under her tenure the cabin remained the place for spiritual and cultural meetings.

The first two decades of her life were nomadic, following caribou and building igloos for shelter. She had not seen White people before she came to Wiseman. She nearly starved in four different winters when they couldn’t find caribou, and she told of cutting the hair off their clothes and eating it. Living off the land, hand to mouth, was a tough life. They came to Wiseman because White people had food.

“The Jonas family came to Wiseman in 1923 for trading for rifle shells, food, and school for their kids,” Reakoff said. “They would leave in the summer to go off in the hills 50 to 100 miles distance to live off the land and dry meat to bring back to Wiseman.”

At one point, Kalhabuk had a near-death experience and described it as “I had tea with the angels.”

When the Reakofffs came to Wiseman in 1964, Grandma Jonas and Jack’s mother, June, became close friends and remained so until Grandma Jonas passed in 1979. The Jonas’ Native allotment went to her granddaughter, Ruth Williams, who was born in Wiseman but moved to Fairbanks in 1942. The Williams family never stayed in the cabin. They rented it out for 15 years to various people until June bought it from her in 1994. June had it refurbished and its structural strength restored to be a community chapel. She started offering a weekly Bible message to the community, and she continued that for nearly 20-years until she passed in 2014.

Jack remembers her working and praying over the message all week, and then on Fridays selecting scriptures to go with it. She would have it polished and written in longhand for Sunday morning delivery.

“With her dying breath, mom was saying someone needs to do the chapel,” Jack said. “She wanted me to do it, but I am not a preacher per say. However, reading a ready made sermon is very doable for me.”

All of her messages are kept chronologically in binders. Since June’s passing, Jack has continued the Sunday chapel meetings where he reads a different one of June’s messages.

“They are all four pages long. Now and then I come to one that is three pages, and even less frequent one that is five pages,” he said.

Every Sunday at 11 a.m., the service opens with an exchange of community news and perhaps a little gossip. A few hymns are selected on the fly by parishioners. Jack reads a message from the archives, and believers have a spiritual meal that is as unique as Wiseman.

Freelance writer Gary Tomlin can be reached at gtomlin50@yahoo.com.