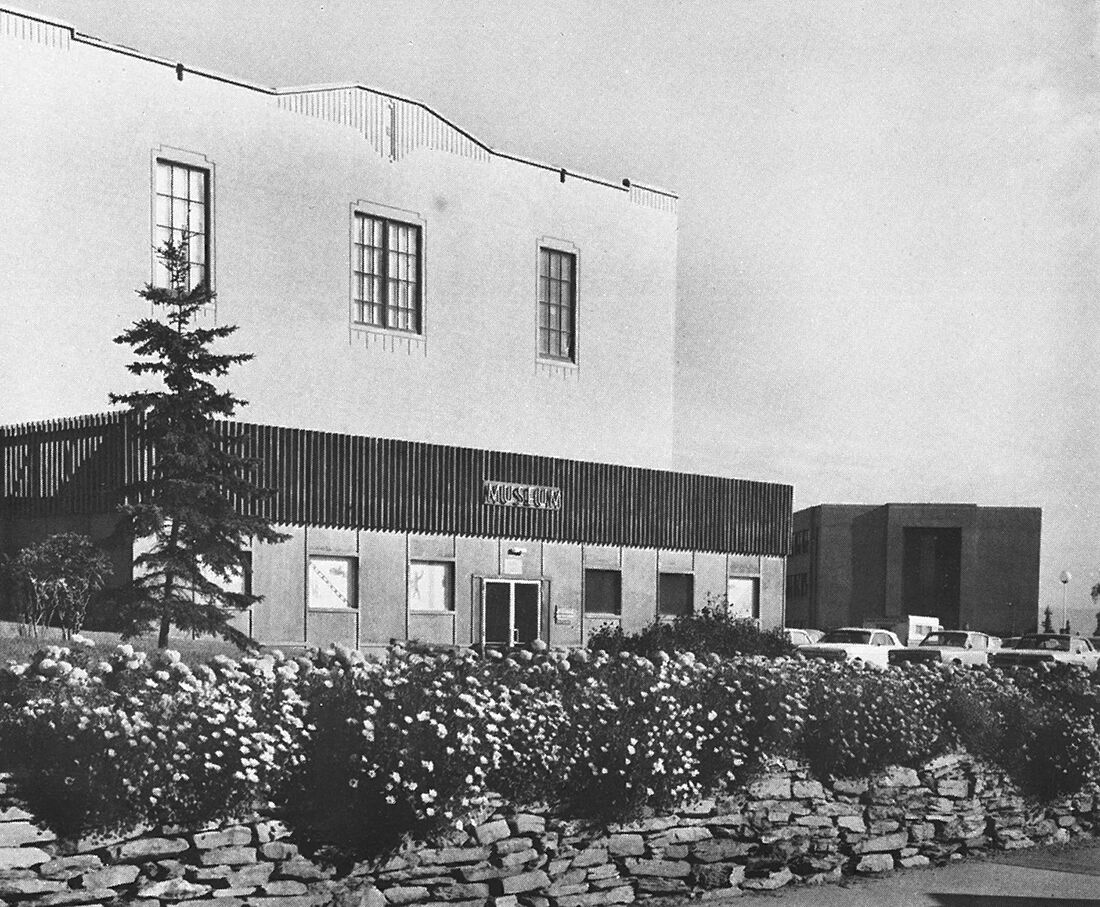 Between 1963 and 1980, the UA Museum was located in what is now known as Signers’ Hall on the UAF campus. 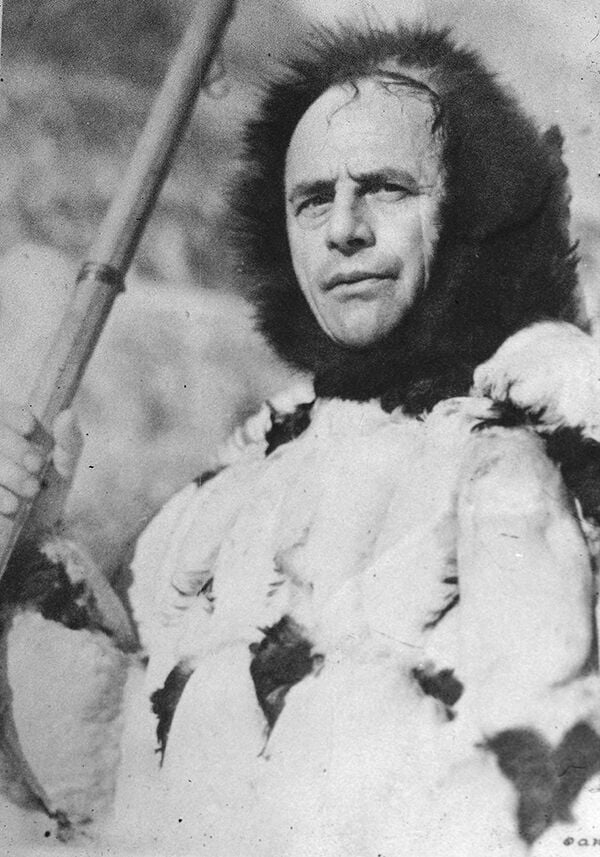 Otto Geist is dressed in a bird parka for the first Ice Carnival in 1934. 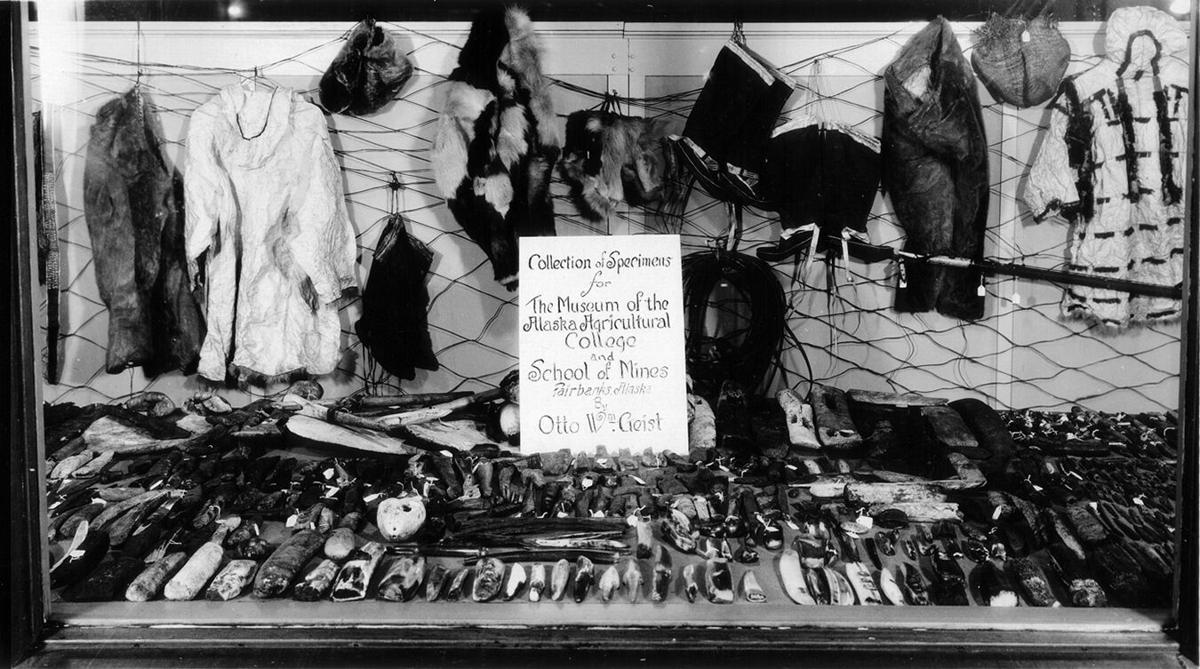 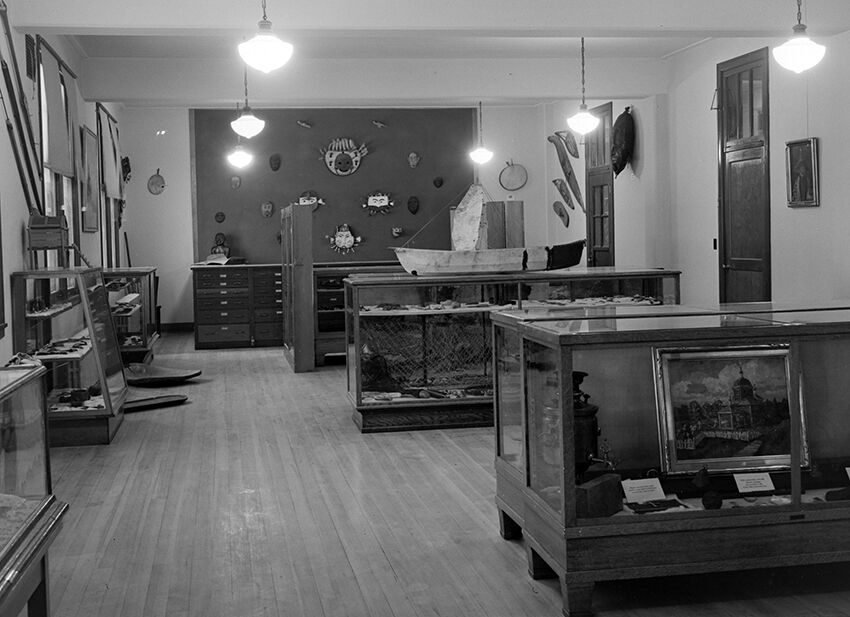 These display cases were in the cultural section of the UA Museum, located in the Eielson Memorial Building, in 1951. 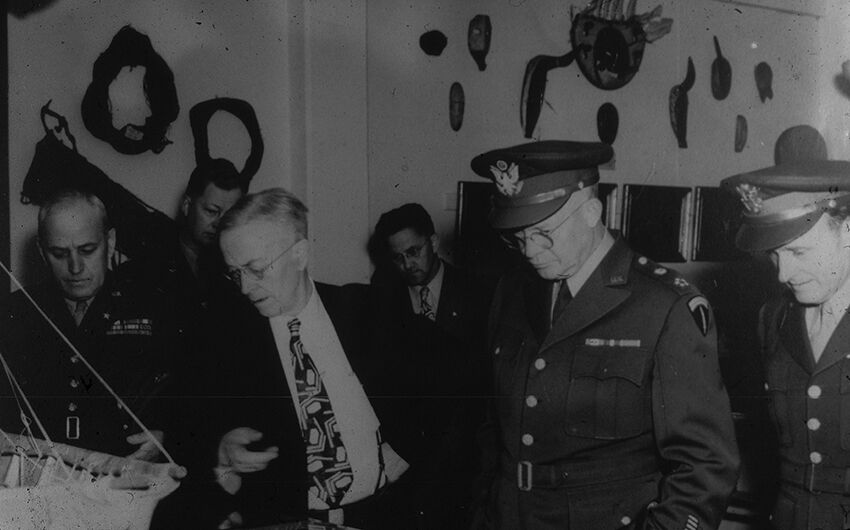 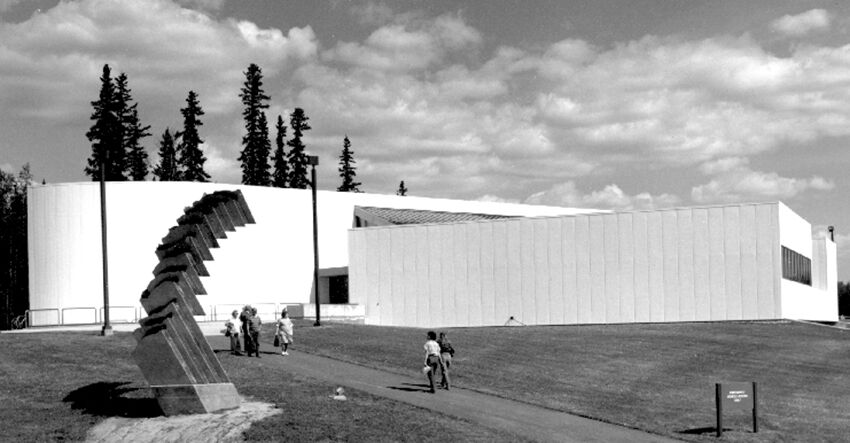 The newly-constructed Otto Geist Building as seen in 1980. UAMN Photo 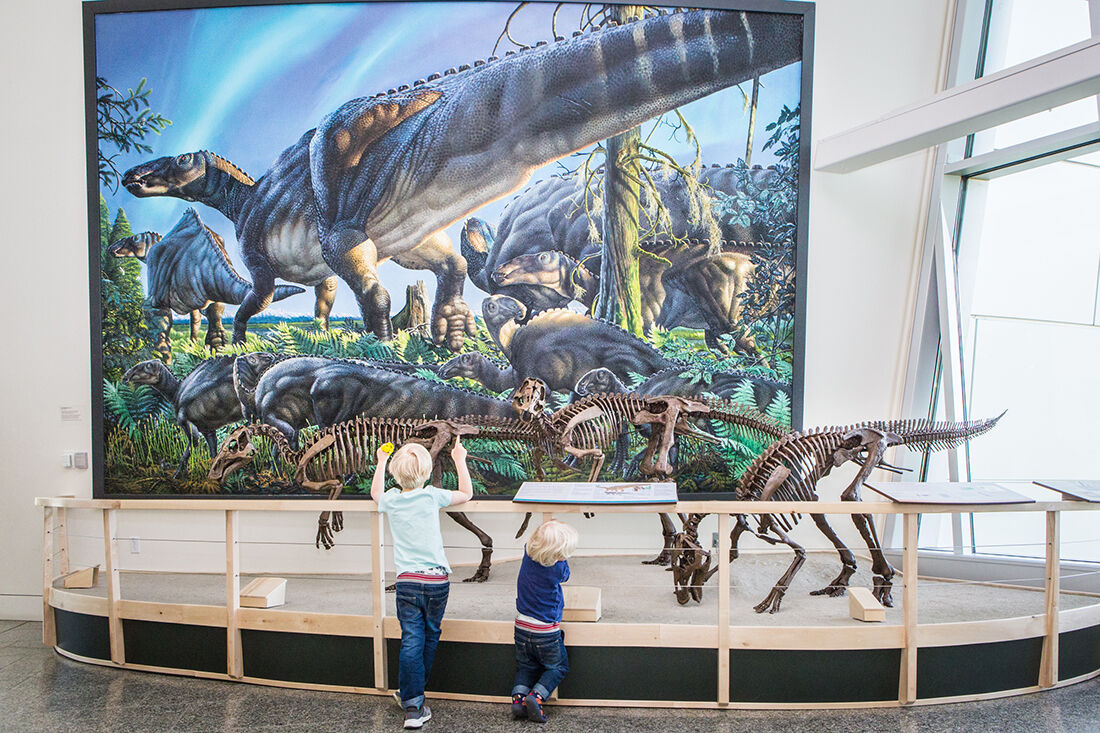 Two young museum visitors enjoy the duck-billed dinosaurs known as Ugrunaaluk kuukpikensis and the realistic painting of them by Anchorage artist James Havens.

Between 1963 and 1980, the UA Museum was located in what is now known as Signers’ Hall on the UAF campus.

Otto Geist is dressed in a bird parka for the first Ice Carnival in 1934.

These display cases were in the cultural section of the UA Museum, located in the Eielson Memorial Building, in 1951.

The newly-constructed Otto Geist Building as seen in 1980. UAMN Photo

Two young museum visitors enjoy the duck-billed dinosaurs known as Ugrunaaluk kuukpikensis and the realistic painting of them by Anchorage artist James Havens.

As a student of history, anthropology and museology, I find pure delight in uncovering and sharing hidden histories. As an interdisciplinary Ph.D. candidate based in UAF’s Arctic and Northern Studies program, I’m using my own 25 years of Alaska museum experience to better document the history of the UA Museum of the North (UAMN), and celebrate the dedicated staff and faculty who created our museum and fostered its growth over the past 95 years.

Longtime Fairbanksans may remember the museum from what is now Signers’ Hall, formerly the gymnasium of the Alaska Agricultural College and School of Mines (AACSM). But even that “old” (1963-1980 in Signers’ Hall) version of the museum had over 30 years of museum history behind it.

Our official history says the museum’s founding collections began with the 1926 Bering Strait expedition of Otto William Geist (1888-1963), a Bavarian-born naturalist who attended AACSM for a short course in gold mining. What often is forgotten is what inspired that trip. Some time before (some sources say as early as 1922) Clarence L. Andrews, a writer and employee of the U.S. Bureau of Education and Reindeer Service, donated a small collection of Alaska Native objects to the young college. President Charles Bunnell displayed those items in his office and shared them with many curious students.

During winter 1925, Geist spoke with Bunnell about his idea to mount a reconnaissance trip to the Bering Sea in the spring of 1926. He believed the island and coastal communities might hold the secrets to understanding the settlement of the North American continent. During that next summer, Geist traveled to St. Michael, Nome, and Savoonga, and other coastal communities in the Aleutian and Pribilof Islands, purchasing artifacts from local Alaska Native residents, visiting Indigenous villages and Russian settlements along the way. The results prompted President Bunnell to personally pay Geist $1,000 for a subsequent 1927 expedition. By 1929 Geist returned to College with what Dean Ernest Patty described as “thousands of ethnological, anthropological and geological specimens which he excavated and collected during his three years’ expedition to St. Lawrence Island.”

The museum collections generated a great deal of excitement on the still-growing campus. Students observed the cataloging work of museum researchers in various buildings, until in 1935 the University completed the first concrete, and thus fireproof, building on the campus in the Eielson Memorial Building. According to a 1935 article in the Nome Nugget, “the College now has in its museum the most extensive and complete collection of specimens of [Inuit] cultures and handicrafts, others modern and prehistoric, of any known to exist.” This year also brought the first official director of the museum, Dr. Froelich G. Rainey (1907-1992), who helped professionalize the museum and drive the development of what would become the UAF department of anthropology.

Over the decades, the Farthest North Collegian regularly featured stories of museum donations by local residents, scientific discoveries by paleontologists, biologists, and anthropologists, visits by political figures and prestigious scholars, and features by UA faculty who were interested in different elements of the museum collection. During World War II, the US Army took over much of the UA campus. As a result, in 1940 the museum moved from the first to the third floor of the Eielson building, under the direction of Louis Giddings, another archaeologist who, in 1947, became the first named curator at the museum. Ivar Skarland (1899-1965) took over as director in 1950, while also serving as professor of anthropology for another fifteen years.

In 1957, Ludwig J. Rowinski (1929-2013) began his career with the museum, rising to director in 1961. His tenure would be defined by his completion of the first purpose-built museum facility on the UAF campus in 1980 and the resulting reunion of the diverse biological, geological, cultural, and art collections that had previously been housed in buildings all across campus. Trained in wildlife management, he promoted an innovative approach for the Gallery of Alaska, which used a geographic arrangement intended to show the relationship between the far-ranging collections and subjects found in the museum. Designed at a time when museums tended to arrange galleries either by discipline or using a historical linear timeline, Rowinski successfully completed a vision that resulted in a gallery that continues to serve our community with a holistic and interdisciplinary approach, which our researchers and educators use to achieve our mission.

As we near our 100th anniversary (2026 officially), it is important to look back and appreciate the many iterations of our institution and the central role it has played over the life of our university campus. Whether it’s educating International visitors or hosting our local school children and college students, the UA Museum of the North is committed to the value of collections-based research that connects our contemporary residents with the natural, cultural, and art history of our past, present, and future. Globally, museums are undergoing a major re-examination and re-definition. With an eye on our past, the UAMN staff will continue to be engaged with collections-based globally-relevant research while staying grounded in our local stories.

Angela Linn is senior collections manager, ethnology and history at the University of Alaska Museum of the North. For more information about the museum’s collections, programs and events, visit www.uaf.edu/museum or call 474-7505.