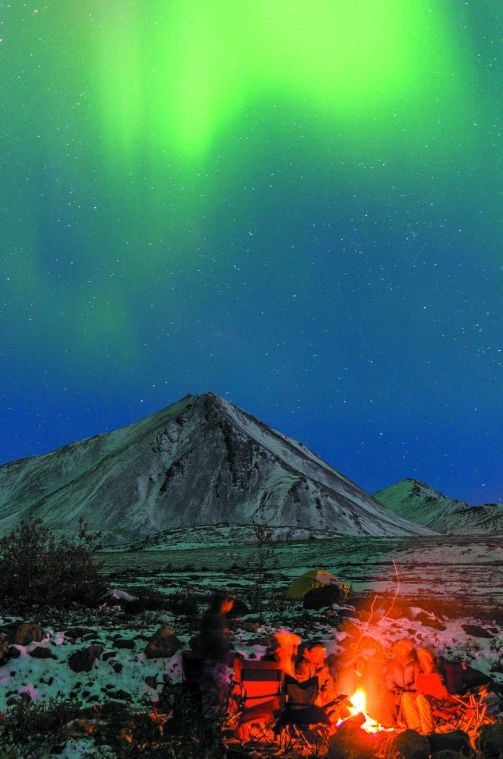 Good conversation keeps UAF geology and geophysics graduate students awake as they huddle around a campfire at Galbraith Lake Campground with the aurora dancing overhead. 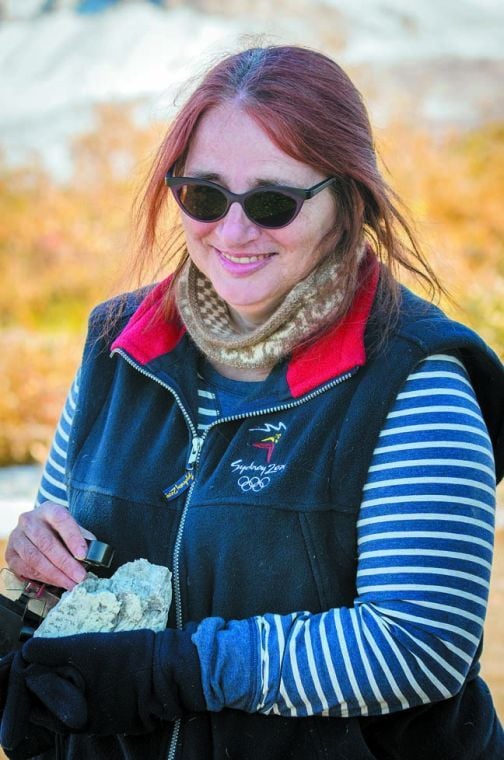 Mary Albanese feels at home as she hikes around the Galbraith Lake Campground and takes a closer look at a fossil. Her first trip up the Dalton Highway with a group of UAF geology students was in 1977. 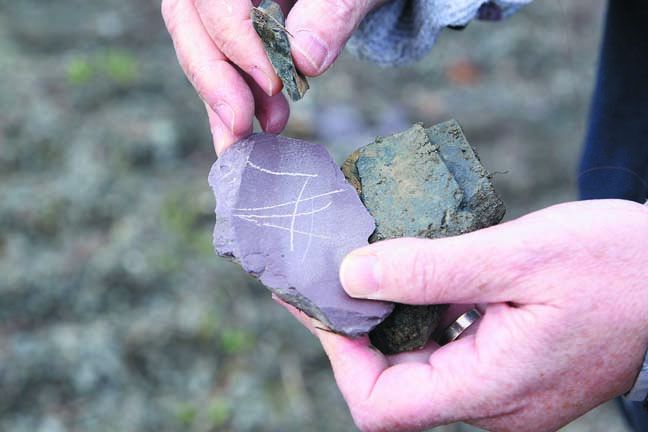 Mary Albanese holds a piece of slate, which is common along the Dalton Highway and is prominent at one of the geology group’s “geostops.” 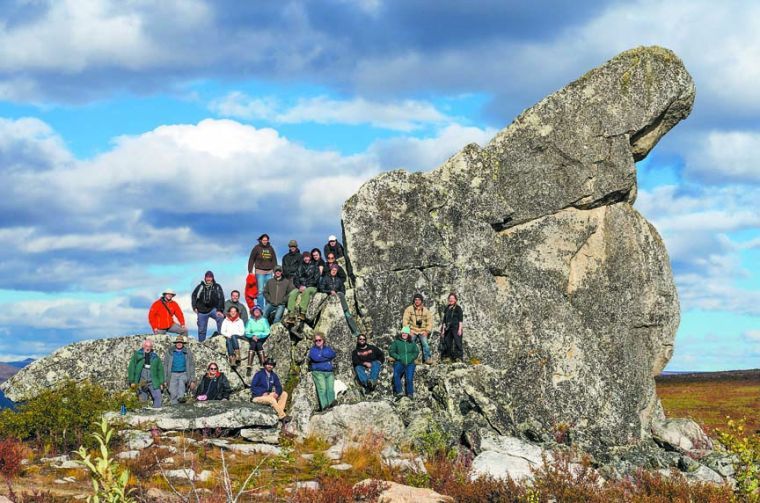 The University of Alaska Fairbanks geology and geophysics graduate students and professors pose for a group shot at Finger Mountain.

Good conversation keeps UAF geology and geophysics graduate students awake as they huddle around a campfire at Galbraith Lake Campground with the aurora dancing overhead.

Mary Albanese feels at home as she hikes around the Galbraith Lake Campground and takes a closer look at a fossil. Her first trip up the Dalton Highway with a group of UAF geology students was in 1977.

Mary Albanese holds a piece of slate, which is common along the Dalton Highway and is prominent at one of the geology group’s “geostops.”

The University of Alaska Fairbanks geology and geophysics graduate students and professors pose for a group shot at Finger Mountain.

More than 30 years ago, a young woman chose the James W. Dalton Highway. She would travel as many miles as there are days in the year from Fairbanks to where the rugged dirt road leads north into the Arctic tundra.

Mary Albanese was nervous, not because the trip was along a remote stretch of road in a state she barely knew. She worried because the trip marked a leap of faith without first knowing how far she could jump.

Although time has settled like dust on this dilemma, it became fresh once again as Albanese revisited the Dalton Highway this fall.

She joined the University of Alaska Fairbanks Department of Geology and Geophysics on its annual pilgrimage up north. Every year before fall classes start, the department’s professors and graduate students drive through the Brooks Range mountains.

Three nights of camping promise an introduction to Alaska’s geology and conversations that outlast the night.

Albanese went on one of the seminal trips in 1977 and said it was a life-changing event. It oriented her to a career at a time when not as many women went into science. She also met her future husband, Tom Albanese, on the trip.

Thirty-six years later, Mary Albanese received an invitation from a friend to ride down the bumpy, pot-holed memory lane. She said “yes” to Paul Layer, dean of UAF’s College of Natural Science and Mathematics.

As Albanese settled into one of four blue vans, she said, “I keep expecting to fall asleep in my tent tonight, only to wake up and find that the last 30 years of my life have been a dream.”

“What have I gotten myself into?”

Knox moved to Fairbanks from Indiana with her husband and two teenage daughters so that she could pursue a graduate degree in geology studying carbonate rocks. “My family is adventurous and wanted to move to Alaska. This was their decision, too.”

Like April, many of the 20 graduate students on the trip are from out of state or places like Russia, Switzerland and Bolivia. The trip up north is a taste of the seasonal clock that Alaska ticks around, and is a way for students to develop a safety net of friends.

“I feel like we have this instant community,” Knox said.

The trip was also a chance for students to acquaint themselves with a different kind of community — one of slate, shale and other rocks. As the students drove north, they would gather at different “geostops” and relate the colorful “Alaska Geologic Map” to the landscape in front of them. Splotches of color, some polka-dotted, some striped, denoted different types and volumes of rock units within a black outline of Alaska.

Thirty years ago, this map still had a lot of blank spots on it. While Albanese earned her graduate degree in geology, she slogged and hiked through the Alaska wilderness with a rock hammer in hand, chiseling away the white areas of the geologic map.

It was not a venture without challenges.

She wasn’t even sure if her career in geologic mapping would turn out. The UAF geology department had accidentally admitted Albanese into their graduate program after a paper snafu. Albanese had a bachelor’s in science, but not enough prerequisite courses for the graduate degree. A professor told Albanese she could stay, but she would have to complete a slew of undergraduate courses in addition to her graduate work.

Albanese also had to deal with being a woman in a field and at a time when women were still struggling to establish themselves as men’s professional equals in science.

“You couldn’t mess up as a woman,” Albanese said. “Mistakes would follow you wherever you went.”

Of course, it was hard for anything to follow Albanese through the tussocks, on the scree and over mountain ridges. So Albanese captured her experiences as an Alaskan geologist in an autobiographical book, “Midnight Sun, Arctic Moon.”

Her professional career blossomed in Alaska, but she eventually moved to England with her husband and shifted into creative writing.

She said the Dalton Highway trip made her realize why there’s no other place to study geology than in the Brooks Range. She also enjoyed listening to her companion’s future plans.

“One of the most exciting parts of this trip is imagining the careers ahead of these students,” she said.

A community of friends

“Mary, that’s the mountain,” said Dean Layer. Albanese looked with respect toward Mount Dillon. It was named after John Dillon who had been an instructor on Albanese’ first trip and used mini firecrackers to wake people up in the morning. A fun-loving UAF professor and geologist, he died in a plane crash, and a massive mountain of marble near the Dalton Highway was named in his honor.

Albanese said there had been many professors and people who had influenced her life in much the same way that trip leaders like Dean Layer and geophysics professor Doug Christensen are influencing these students.

The two have been leading the trip for about 20 years. While Albanese attended UAF before these professors took over the trips, she said the spirit of the trips remains the same.

Students make new friends, experience the immensity that is Alaska and even learn a surprising thing or two about the professors and each other.

As Albanese sat in a café with students eating hamburgers, the conversation meandered from dry cabins to “Could I have one of your tater tots?” to tattoos.

Someone asked Albanese if she sported a tattoo, and she smiled. After earning a doctorate degree in creative writing, she had the words “Dr. Mary” tattooed. As to where, she said, “Let’s just say, I’m resting on my laurels.”

Meghan Murphy is the public information officer/recruitment coordinator for the University of Alaska’s College of Natural Science and Mathematics.