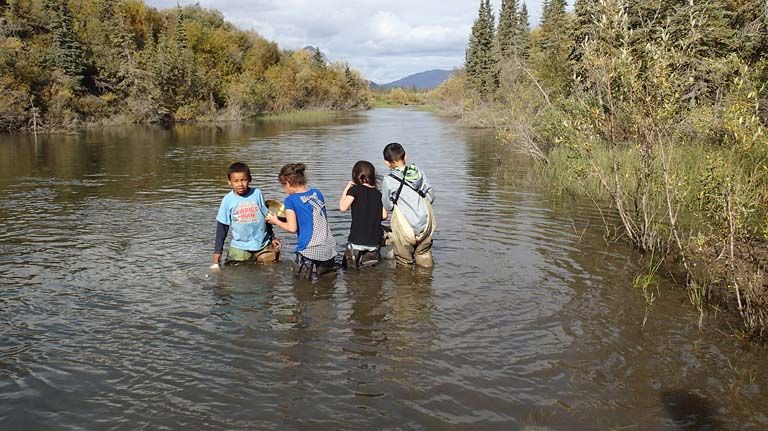 Elementary school students wade in the stream outside their school trying to catch water bugs and other life. 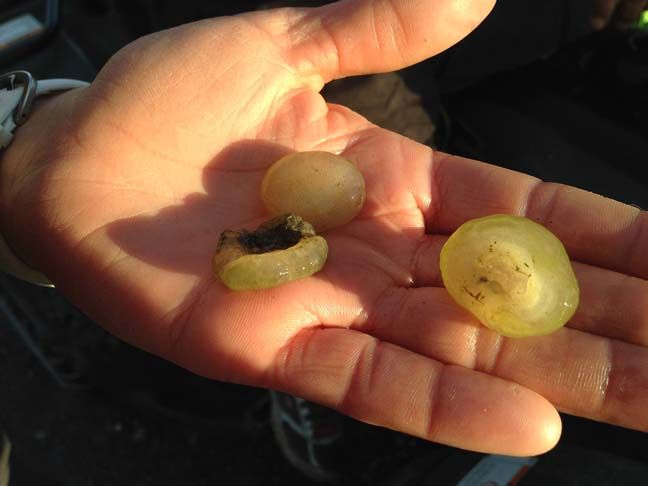 Clear jelly-like blobs pulled out of the stream by students could be freshwater sponges or egg masses. 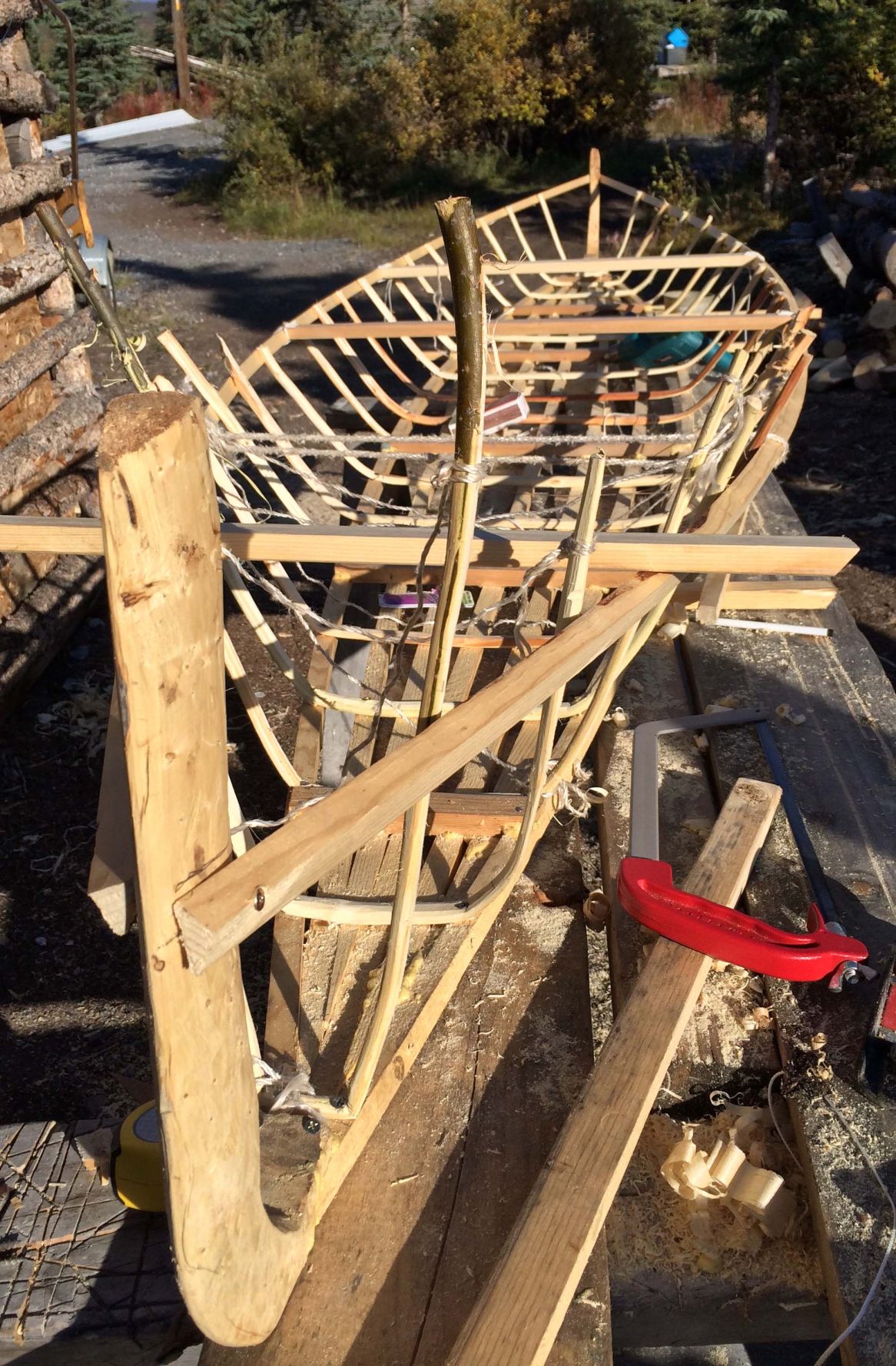 The Gwich’in Athabascan people of Arctic Village built small boats, or ”tr'ih tsal,” out of willow and spruce over many generations to fish and hunt on the river and lakes. 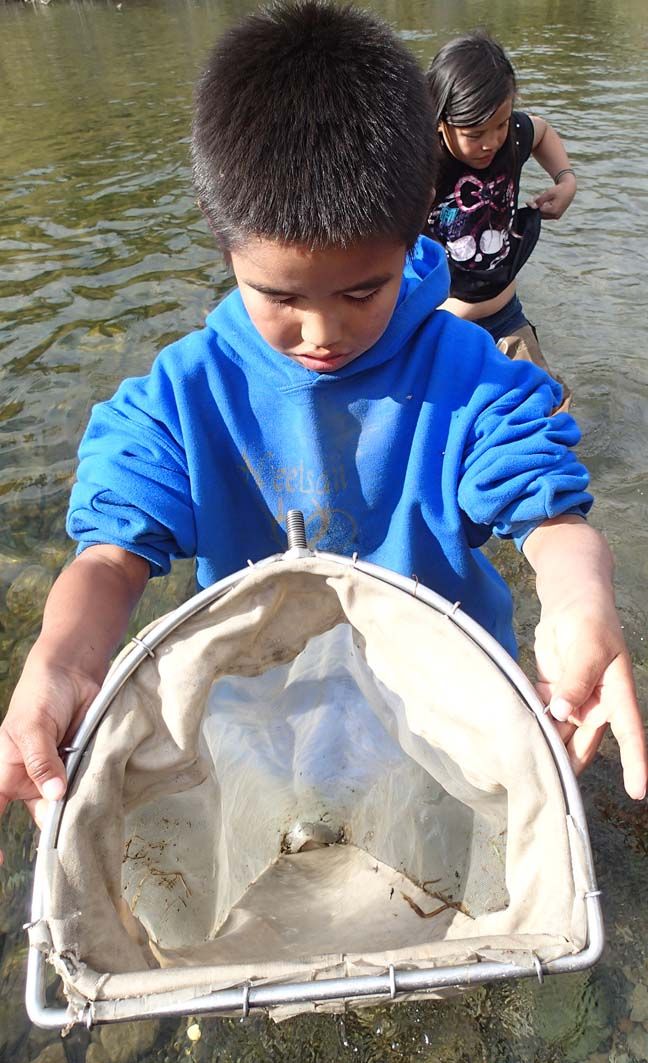 An Arctic Village elementary school student examines what he caught in his net. 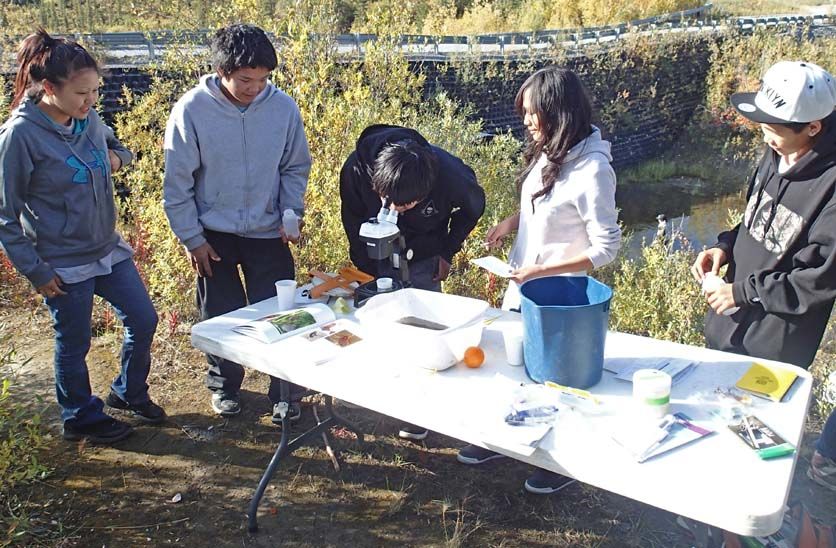 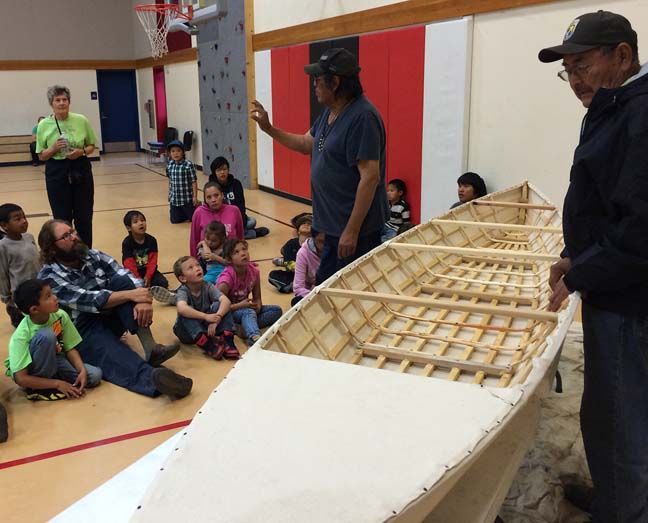 Elementary school students wade in the stream outside their school trying to catch water bugs and other life.

Clear jelly-like blobs pulled out of the stream by students could be freshwater sponges or egg masses.

The Gwich’in Athabascan people of Arctic Village built small boats, or ”tr'ih tsal,” out of willow and spruce over many generations to fish and hunt on the river and lakes.

An Arctic Village elementary school student examines what he caught in his net.

ARCTIC VILLAGE — The clear blobs being scooped out of the arctic water looked like a cross between a slug and a grape. Students from Arctic Village slogged through the stream outside their school decked out with waders, nets and sieves on a sunny August day.

“We were looking for water bugs. They hang out under the rocks. It was kind of slippery, but I’m surprised I did not get wet,” said sixth-grader Angel Gilbert.

The Gwich’in Athabascan village is located on the east fork of the Chandalar River, 300 miles north of Fairbanks, tucked between the soggy Yukon Flats and the craggy peaks of the Brooks Range. The tundra was streaked in the red and gold shades of fall.

Camp Goonzhii (meaning wisdom and knowledge in Gwich’in) has been held in Arctic Village by the U.S. Fish and Wildlife Service for 11 years. The three-day camp aims to expose students to both old and new forms of knowledge — stream ecology, orienteering, bird identification and watercolor painting as well as traditional subsistence and language skills. I was there with the Cold Climate Housing Research Center talking about energy efficiency.

“We just want to spark their interest in biology, in their Native cultural heritage, possibly in a career down the road,” said Joanne Bryant, community liaison for the Arctic National Wildlife Refuge office and organizer of the camp.

Bryant grew up in Arctic Village, which

is located inside the refuge.

“The missions are similar. We live off the land, and Fish and Wildlife takes care of the land and the animals.”

Elders also shared knowledge about hunting caribou, snaring rabbits and survival skills honed over thousands of years of living in the boreal forest — where winters are harsh and food can be scarce.

“The traditional way of life is very important to us. We have to hang on to our own culture, our own language, to eat our own food, the way we live — hunting, trapping, sewing, art,” said Trimble Gilbert, an elder in Arctic Village who also is a traditional chief in the Tanana Chiefs Conference region.

Gilbert showed students how to build a canvas canoe, or “tr’ih tsal,” to use for fishing and hunting muskrat and ducks.

He grew up in the 1940s living a nomadic lifestyle, trapping small animals and following the caribou seasonally. The ribs of the canoe were made of willow, which Gilbert bent with his knee and molded with a piece of string. Before screws were available, they used babiche (strips of caribou hide) to tie the frame together. The lightweight canoe could be easily carried between rivers and lakes.

“We used to paddle from here all the way to Ts’iivii T’it (hunting camp), before the motor or boat,” he said. “And then if people got caribou they put meat in there, and they paddled all the way down here.”

Students also learned how to make a fishing net, sizing the mesh according to the type of fish they’re trying to catch. The streams and lakes of the Chandalar are full of grayling and whitefish.

They measured the temperature and acidity of the stream and studied the water bugs under the microscope, the same techniques used by Fish and Wildlife scientists to measure climate change and other natural processes. Residents also shared changes they have seen over the decades, such as melting permafrost, more trees and different fish.

Science and traditional knowledge go hand in hand, said Allan Hayton with the Gwich’in Steering Committee, a co-sponsor of the camp.

“As science advances and discovers more things, it confirms a lot of the observations that our ancestors had about the natural world and how we’re a part of it,” said Hayton, who is also from Arctic Village.

Learning scientific principles can help students in their future careers as well as in everyday life, he said.

“It helps them be analytical, look at the big picture and where we fit in.”