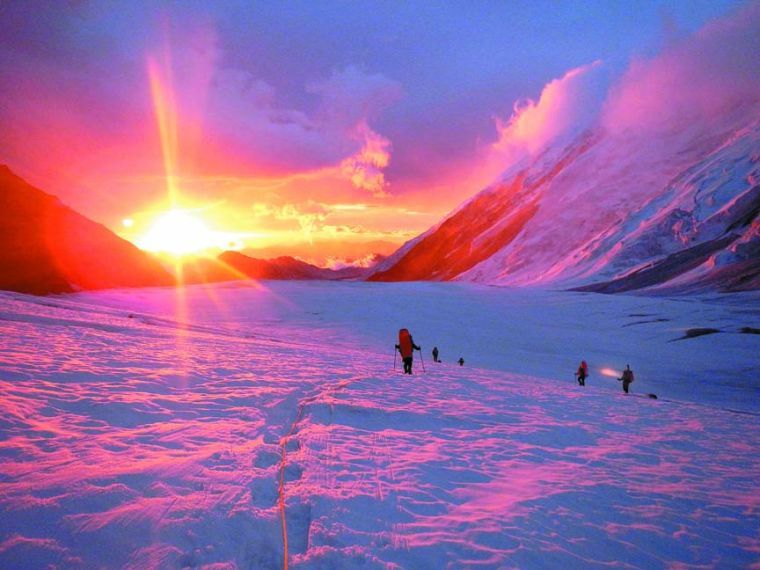 The team descends Denali at sunrise on the Hill of Cracks on the Muldrow Glacier. 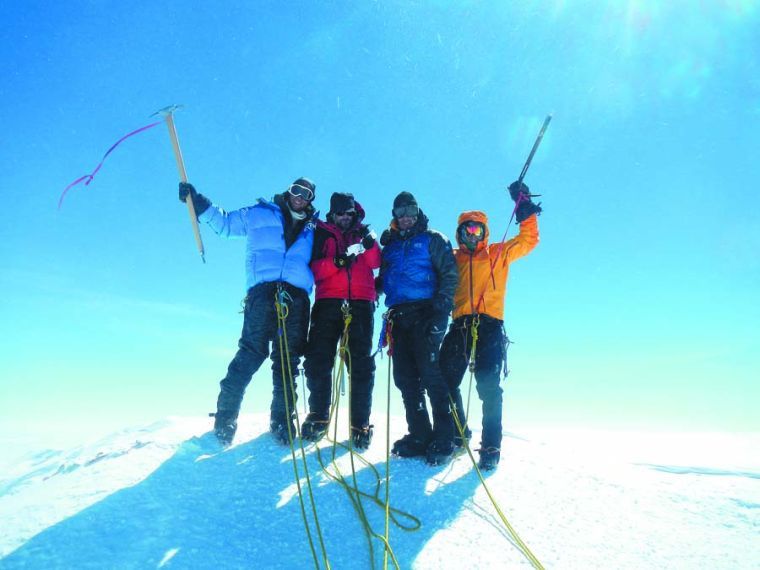 From left are Dana Wright, Ken Karstens, Sam Alexander and Dan Hopkins on the summit of Denali. 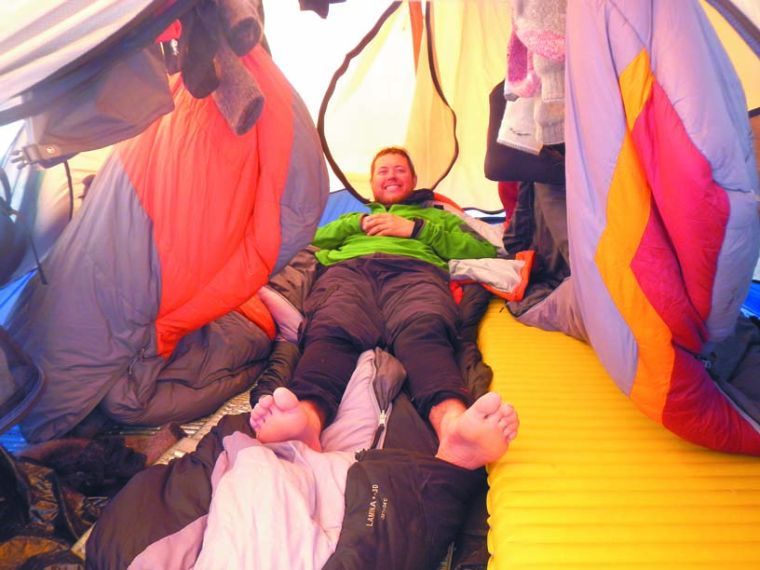 Ray Schuenemann is seen in his tent at the 17,000 foot camp. He had to stay behind because of altitude sickness while the rest of the team summited.

The team descends Denali at sunrise on the Hill of Cracks on the Muldrow Glacier.

From left are Dana Wright, Ken Karstens, Sam Alexander and Dan Hopkins on the summit of Denali.

Ray Schuenemann is seen in his tent at the 17,000 foot camp. He had to stay behind because of altitude sickness while the rest of the team summited.

FAIRBANKS — I had met the mountaineering team at the trailhead with sourdough biscuits, caribou stew, salmon strips, cucumber salad, cinnamon rolls and candy bars, to recreate my grandfather’s role of 100 years ago.

The nine-person team each looked 20 pounds lighter than when I saw them three weeks earlier. They were deeply tanned, skinny, grimy and tired after returning from the summit of Mount McKinley.

They were so happy to have the biscuits, and every time I looked up from my cooking, someone would be stuffing another one in their mouth.

“I think I’m yeast deprived,” one said through chunks of biscuit.

My grandfather was John Fredson, and long ago in nearly the same place, he greeted an equally worn and hungry group of climbers, four men who first successfully climbed Denali. The men I fed that day were their descendants.

We were giddy with victory for the achievement on that hot afternoon in June because we all recreated our ancestors’ roles. Sitting on heavy backpacks, Walter Harper’s great-grandnephew Dana Wright slurped a bowl of stew. Next to him, with a wide grin, was Dan Hopkins, who is Hudson Stuck’s great-grandnephew. Helping me cut the cucumbers is Ken Karstens, Harry Karstens’ great-grandson. His cousin Ray Schuenemann sips a cold beer next to him.

Quietly watching the revelry is Sam Alexander, who climbed to represent my grandfather and Esaias George, another young Alaska Native teen who was with the 1913 team.

The long way up

The 1913 team reached the pinnacle via the north side of the mountain, up the Muldrow Glacier and Karstens Ridge, a longer and tedious route rarely used today. The young men before me followed the same exhausting route to mark the 100th anniversary of the first successful ascent of Denali, with four guides from Alaska Mountaineering School.

I heard about the plans in October 2012 and started helping them the best I could.

I’m not fit enough to climb and my grandfather made it to 12,000 feet before he had to go back and take care of the basecamp and the sled dogs that had brought them to the mountain. There he waited alone for 31 days until the men walked into camp.

I loved the idea of the historical recreation. More exciting was the chance for the descendants to meet each other as the original 1913 team or their families were never all together again after they came down off the mountain.

The descendant group was just as enamored of the history as I was or more. They proudly reviewed their own family stories and sought to make the 2013 centennial climb as close to the original as possible.

I was dying to know all the details of their climb, but according to mountaineering culture, I should let the climbers tell their stories on their own terms. Instead of asking “Did you summit?” ask instead, “How was the climb?”

I also wanted to know if Wright had claimed the summit first as Harper did in 1913.

“Whoever is fit enough when we get there will be the first,” the group always told me. I thought it would be Ken Karstens, as he was the major force for organizing the climb, and a passionate historian of Denali and the surrounding park.

The view from the top

On the bus ride back to the Denali National Park and Preserve entrance from Wonder Lake, I tried not to ask a lot of questions to give them space to adjust to the greenery of the surroundings and just the act of riding in the bus instead of walking to their destinations.

On June 27, at 17,000 feet, the group was beyond tired but set about carving out snow walls for windbreaks and setting up tents. It had been 19 days since they began their climb and it was tougher than they imagined. They knew the weather was getting bad, bringing high winds, extreme cold and low visibility. They had as least five days to try to make the summit before they had to go back down because of dwindling food and fuel, but the weather forecast predicated things were only going to get worse over the next week.

On the morning of June 28, one of the guides used the satellite phone to check that day’s conditions. There was a small window of good weather. He gave the team a choice; take a much-needed rest day or go for the summit.

“We really wanted a rest day but we decided to go,” Karstens said.

Dan Hopkins and Sam Alexander roped up with a guide and started out first.

Karstens and Wright, with their two guides, followed behind.

Within 20 feet of the summit, Hopkins and Alexander stopped and waited for Karstens and Wright. The guides roped the four together: Wright, Karstens, Alexander and Hopkins, similar to the order of the first summit.

“It was Dana,” Ken said. “It was always going to be him. It was never going to be any other way.”

The group was too tired to fully take in the experience, Wright said. They took in the view, planted their flag and took photos, before heading back to the 17,000-foot camp. It took them three and a half days to climb down and walk back to Wonder Lake.

In a quiet moment, Ray Schuenemann sought me out.

“I have something to tell you,” he said. “I didn’t make it to the top.” Tears slid down his deeply tanned face.

When he got to the 17,000-foot camp, he could not stand up. The altitude had taken its toll on him. He was dizzy, his head throbbed and his stomach hurt. All he could do was sit and watch the team put the camp together.

“I felt awful because they had to do all the work,” he said, tears still streaming. He went to sleep and woke up feeling great. He took 20 steps to pee and the sickness hit him again.

“That’s as far as I was going,” he recounted. He stayed behind with guide Paige Bradley for 14 hours until his team returned.

“All I could think of was Johnnie,” he said, and how he waited for 31 days by himself at basecamp, wondering how his friends were doing without a word.

“I was the John Fredson of this trip,” he said.

Diana Campbell is a local writer and the first grandchild of John Fredson. She never met her famous ancestor and has depended on others to learn his legacy. She now passes the family history to her three daughters and two grandchildren.