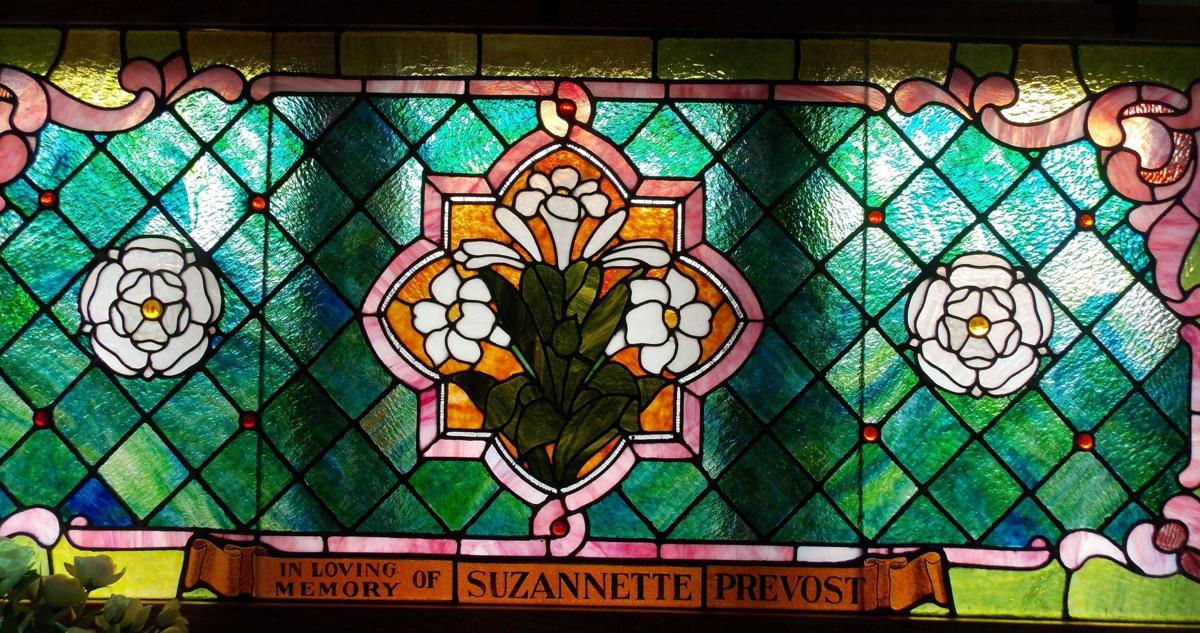 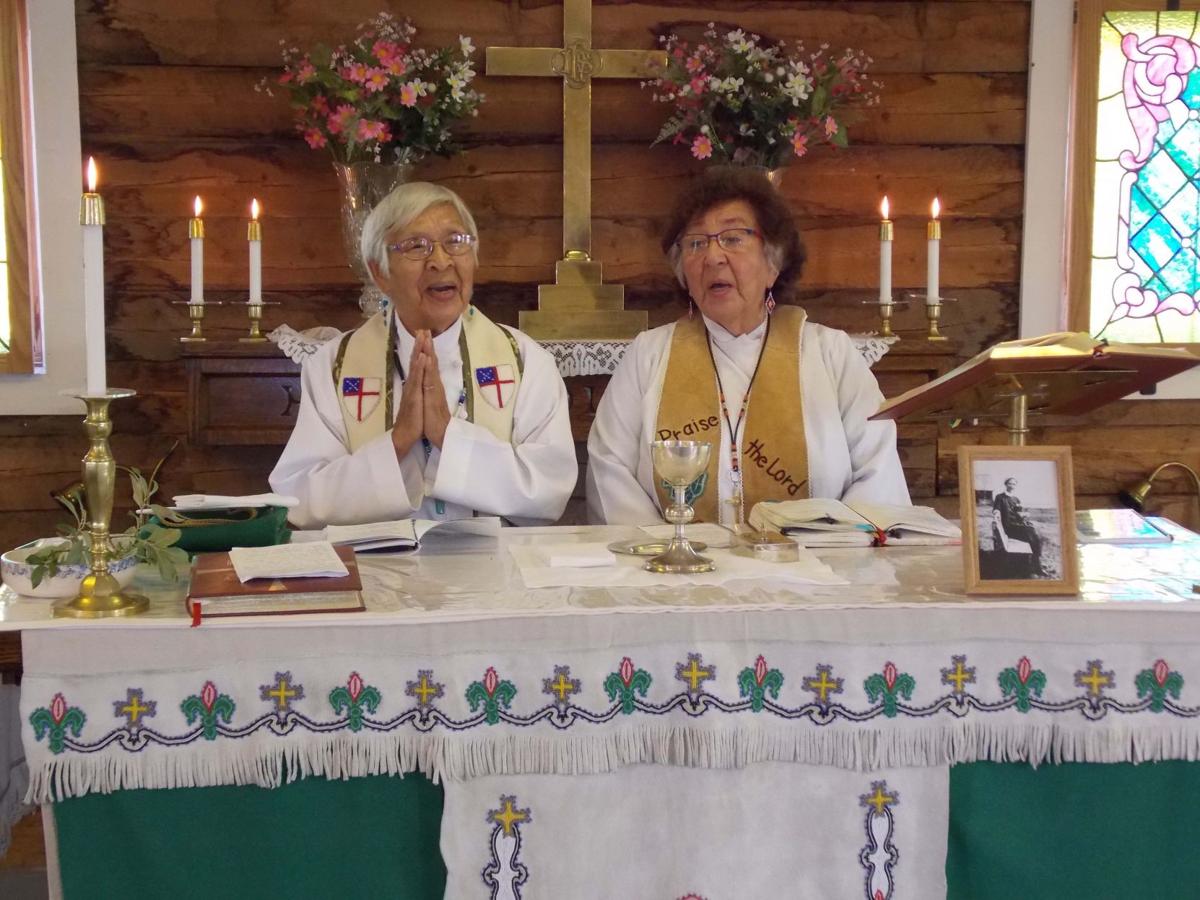 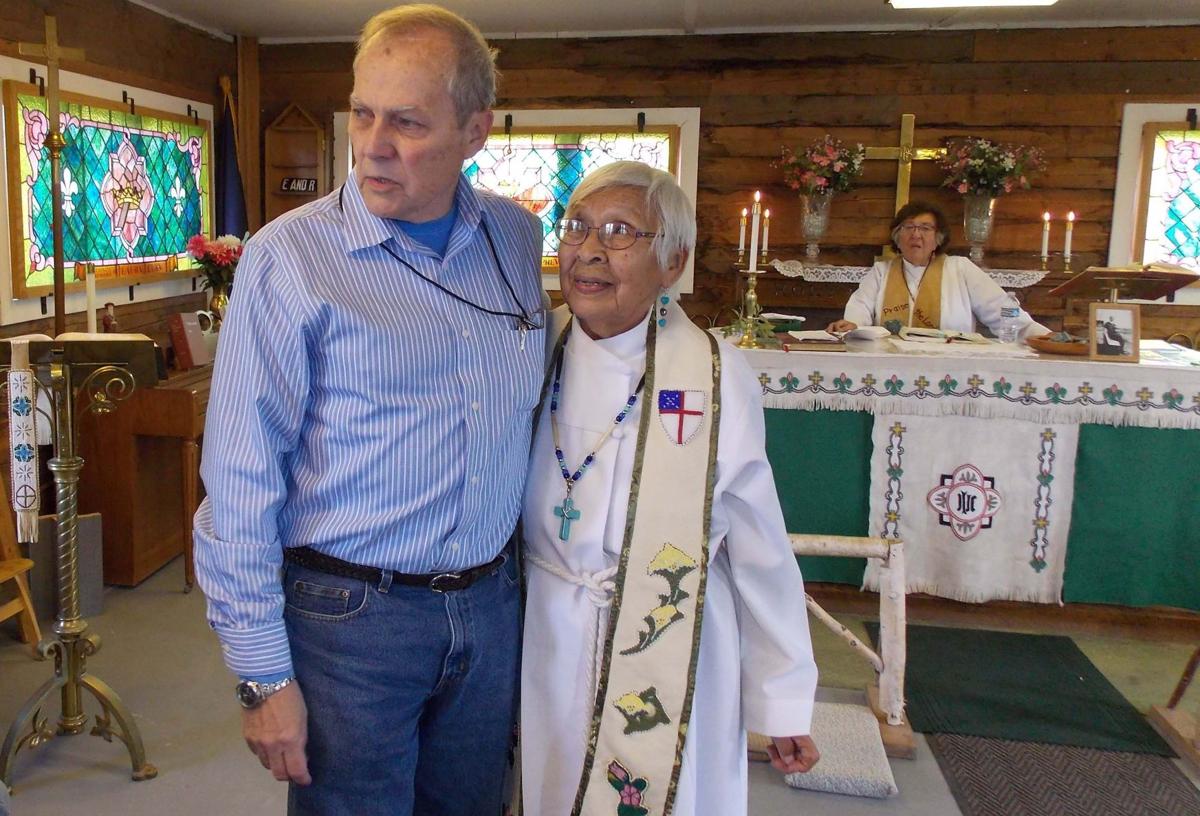 Retired Lutheran Indian Ministries pilot Dan Treakle made the trek to Tanana just in time for the dedication service. He played an integral role in the window restoration project. He is pictured with the Rev. Helen Peters. 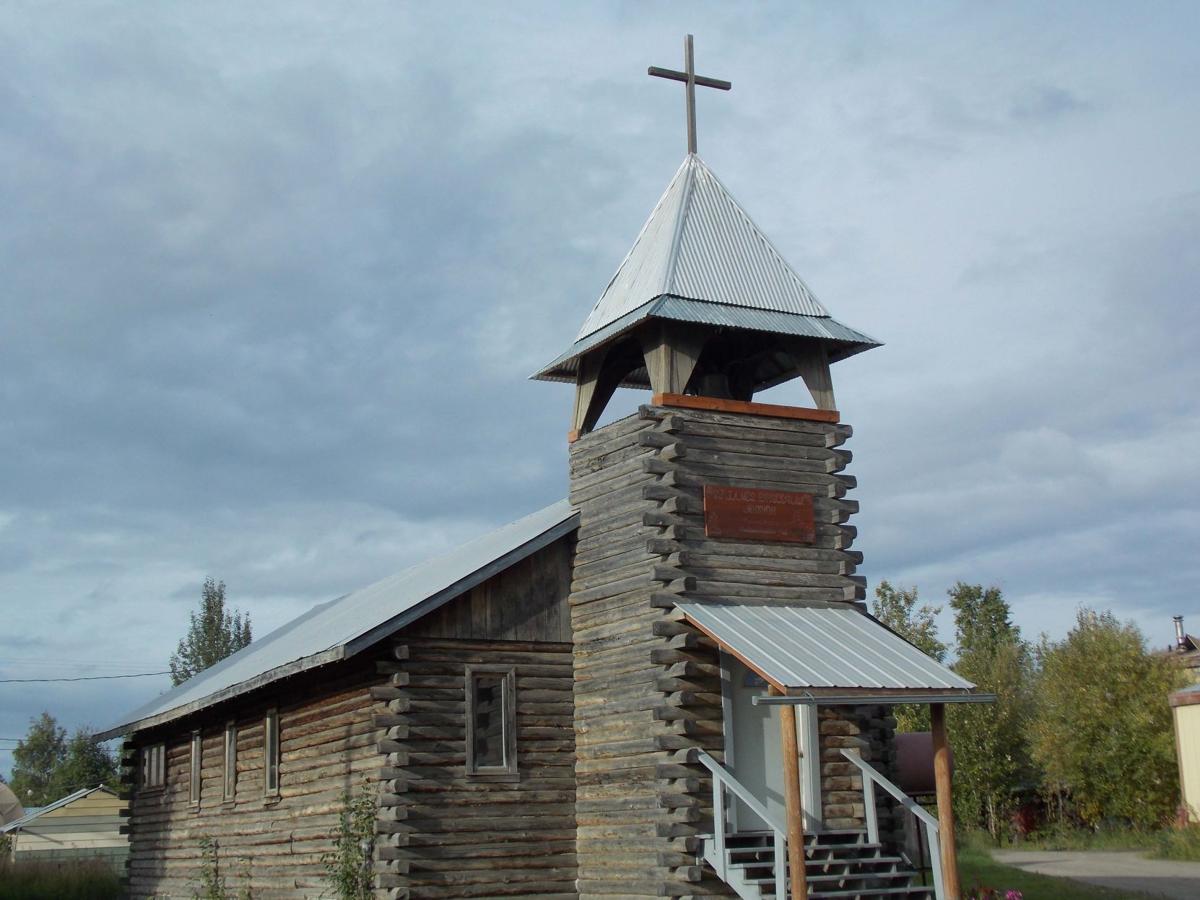 St. James Mission is perched on the banks of the Yukon River in the village of Tanana. It is an Episcopal Mission serving the community for decades. 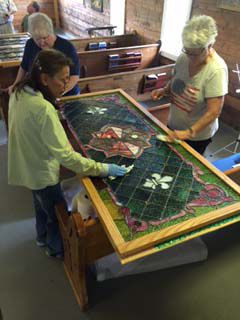 Volunteers from North Carolina prepare the windows to be installed. 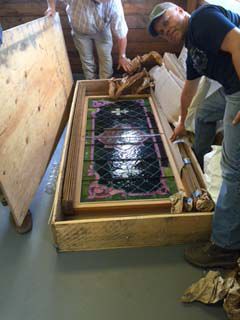 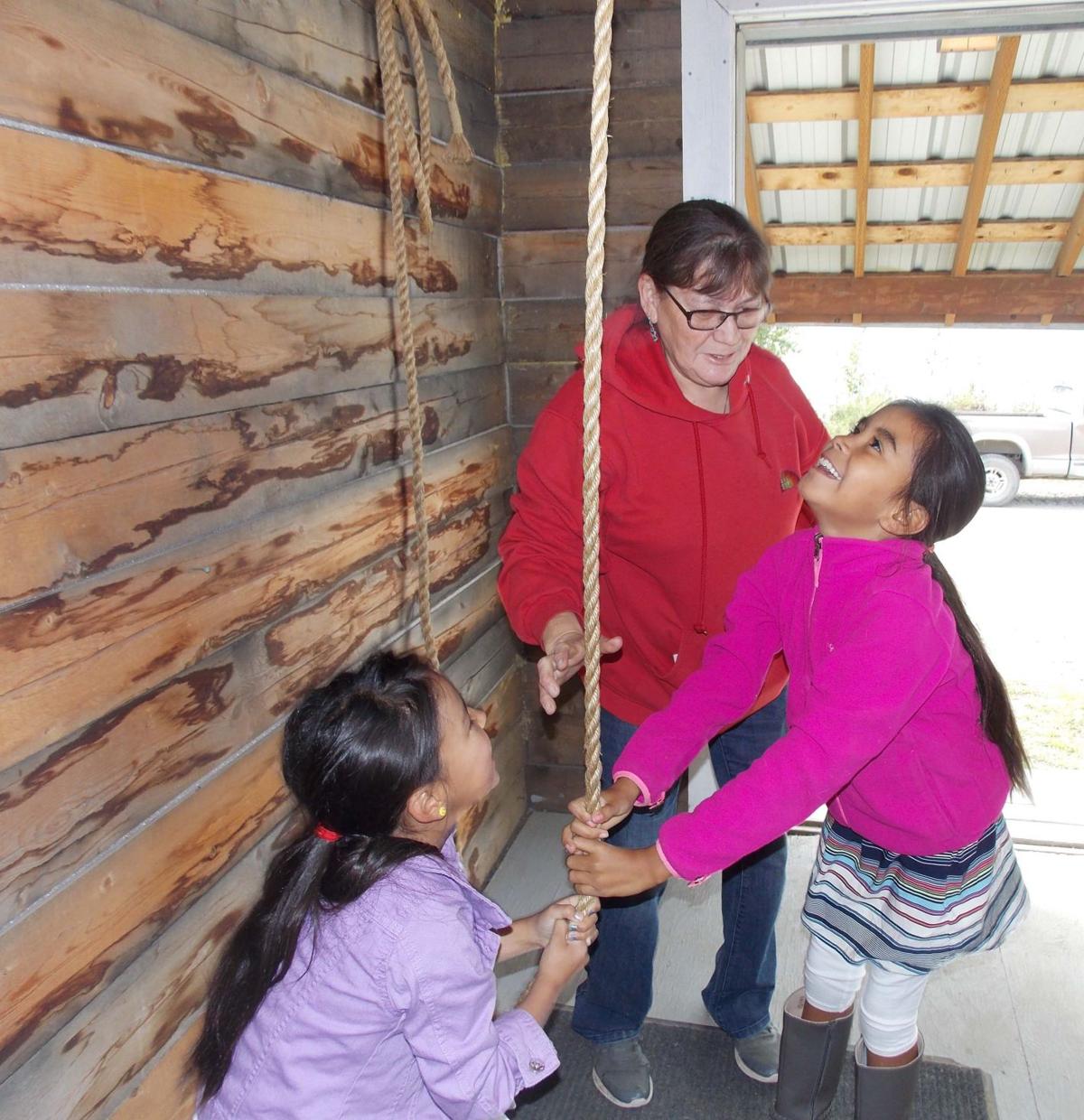 Kyliee Anderson, left, and Leanne Huntington ring the bell at St. James in Tanana on the day the stained glass windows were dedicated. Judy Gau watches the children.

Retired Lutheran Indian Ministries pilot Dan Treakle made the trek to Tanana just in time for the dedication service. He played an integral role in the window restoration project. He is pictured with the Rev. Helen Peters.

St. James Mission is perched on the banks of the Yukon River in the village of Tanana. It is an Episcopal Mission serving the community for decades.

Volunteers from North Carolina prepare the windows to be installed.

Kyliee Anderson, left, and Leanne Huntington ring the bell at St. James in Tanana on the day the stained glass windows were dedicated. Judy Gau watches the children.

TANANA, Alaska — The light shining through the four stained glass windows at St. James Episcopal Mission in Tanana affects the colorful panels the same as the light 113 years ago.

“If only these windows could talk,” said Katherine Zuray, a parishioner at the Episcopal church, following a dedication service Aug. 20 in the village at the confluence of the Yukon and Tanana rivers.

Originally created in Ohio for the Mission of Our Savior three miles upriver from the village of Tanana, the windows had been moved to Tanana and relocated twice. When the logs at St. James shifted, the windows started breaking.

Mary Starr, church treasurer, started gathering the broken pieces of glass from the church floor. “That was driving me nuts,” Starr said. “Because of the pressure of the logs shifting, the windows were being destroyed.” She consulted with the village priest, the late John Starr, and Lutheran pilot Dan Treakle and came up with a plan. After massive fundraising efforts, with all donations coming from private parties, the windows were sent to Fairbanks and restoration efforts began.

It was a long, tedious process for Debbie Mathews of Expressions in Glass. “It was hard,” Mathews said. “They were in bad shape.” The windows were crafted the old-fashioned way with lead, and not many people work in that medium any more. Mathews agreed to tackle the project and chipped away at it, working around her other demands.

Of the two methods of stained glass work (leaded channel and copper foil) lead is more time consuming and Mathews struggled with soldering the joints. “It was messy,” she said. Whenever she had cuts on her hands she had to wait for healing before she could go near the lead or it could have been deadly.

“It was an interesting project, a very big job but they turned out beautiful,” Mathews said.

Local carpenter Craig Robinson of Golden Heart Construction volunteered to build the window frames, and Wright’s Air Service helped get the fragile parcels back to Tanana. Once they arrived, Mary Starr called in a cadre of Outside volunteers to fly to Alaska and install them.

“I cried when the windows came back,” Starr said. “I couldn’t believe it; I thought I’d die before this got done. My faith was as small as a mustard seed, and this was huge. We weren’t able to save the old mission but we could save the windows. It means something to us; it’s part of the history of the church and Tanana.”

The volunteers from North Carolina who came to install the windows were not new to Tanana; they visited several times before not only to lead vacation Bible school for the village’s children but to make improvements to the church and next door mission house. They built a bell tower and entryway and restored the pews in the church and installed new floors at the mission house.

The North Carolinians went to the village in July to install the windows. It was a day of celebration for the villagers to have the historic windows back in place.

Each window is dedicated to the memory of a person who lived at the old mission. Suzannette Prevost and Laura Evan were children from the mission who died of disease. Jules Prevost was the priest, and Deaconess Bernice Sterne was a church leader and nurse.

A community potluck was held Aug. 18 and a dedication service Aug. 20 with the Rev. Helen Peters and Archdeacon Anna Frank leading the service.

“This is an awesome event,” Frank said. “I just love Tanana. Let’s gather our thoughts and memories of our great-grandparents who gathered at the old mission so many years ago,” Frank said. “They sang in the old language, and I’m sure they sounded like a symphony choir.”

During the service, Dan Treakle flew in to celebrate with the community. He was a long-time volunteer pilot with Lutheran and Indian Ministries and helped immensely with the project. “It looks wonderful,” he said. “It’s a really nice reconstruction project. It’s been a lot of years and a multiple community project.”

Elders who grew up at the mission, Flora Demoski and Helen Peters, told tales from the old days and then everyone trooped over to the mission house for hot tea and more stories.

“Praise the Lord, it’s done,” Mary Starr said as she glanced back at the windows.

Anna Frank summed up the experience by saying, “Our stories go on.”

Nancy Tarnai, a former News-Miner reporter, has been writing about Fairbanks and Interior Alaska since 1995. Her family has a home in the village of Tanana, where a part of her heart remains. She can be reached at njtarnai@gmail.com