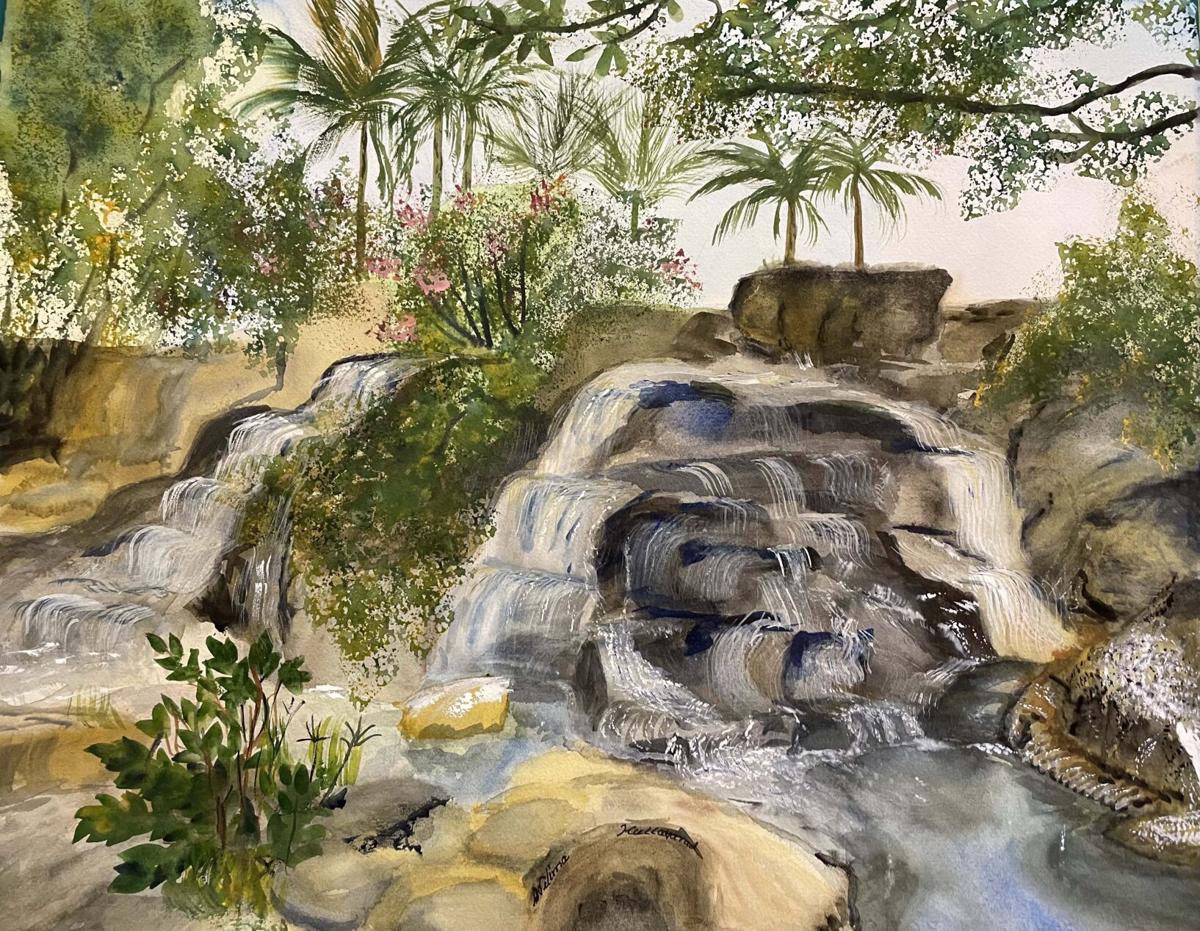 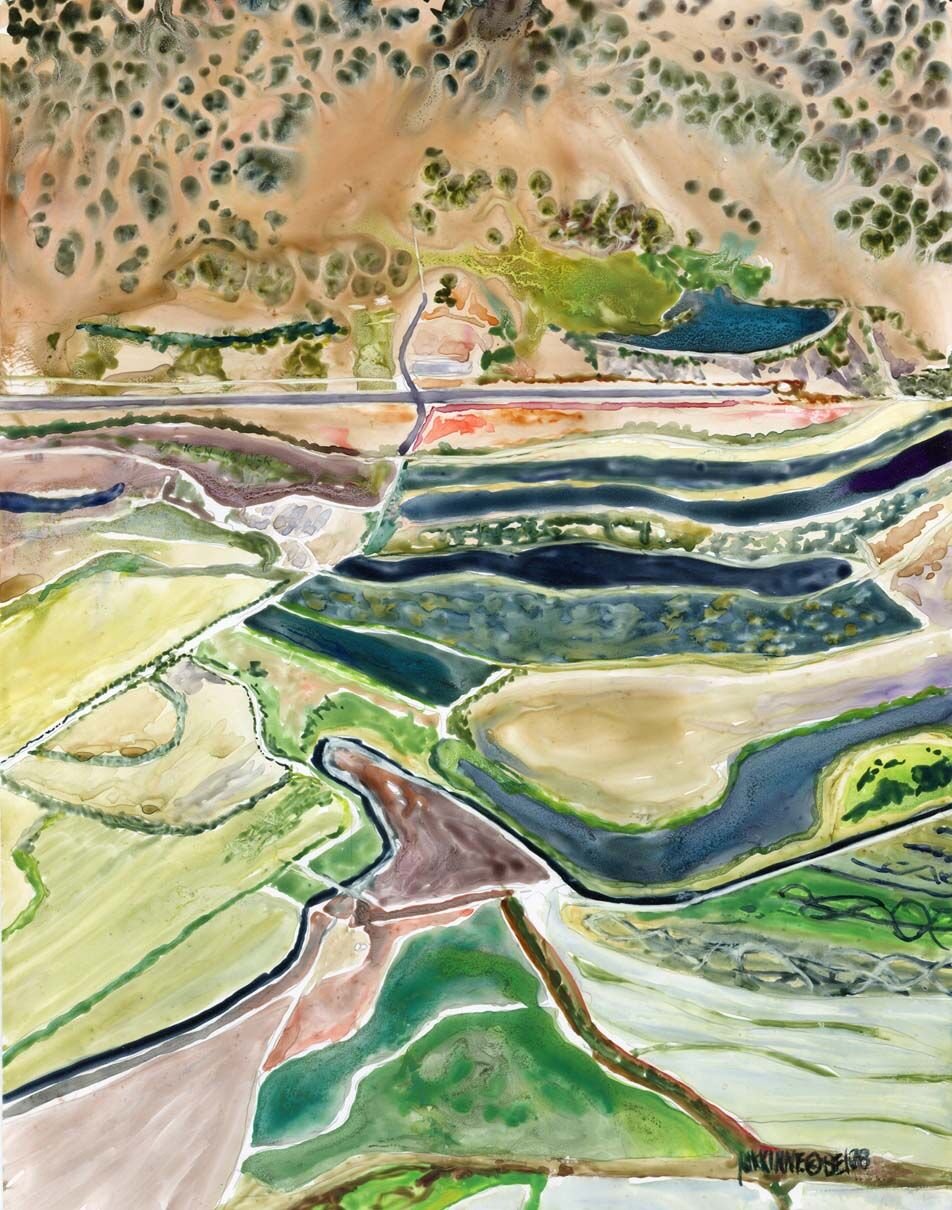 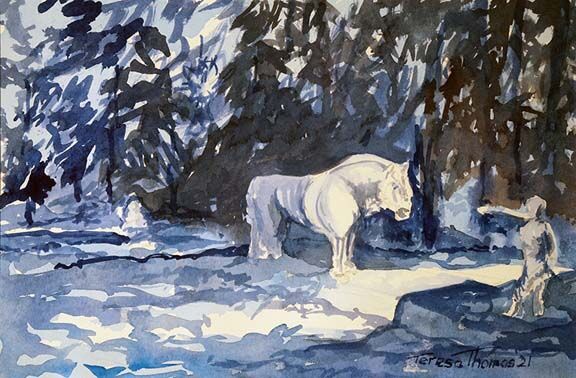 "A painting is like the equivalent of one word. A show is the equivalent of tying enough words together to make a paragraph. And a body of work is an essay,” Nikki Kinne said, crediting these words to nationally known artist Helen Klebesadel.

Then, applying this idea to the show she is part of at Well Street Art Company this month, alongside Dr. Nilima Hullavarad and Teresa Thomas, she expanded on the thought.

“You have three different paragraphs. And each of the three paragraphs, Teresa’s, Nilima’s and mine, are individuals interacting with that confinement of isolation and being locked up. And yet the world, the news coming in to us, is just explosive. And how do you bring light to it? How do you continue to invest in yourself? The place where you say, ‘This is a life goal and time is short.’”

For all three women, the show represents an emergence from the pandemic. The works on display are primarily watercolors, and many of the pieces depict nature and landscapes, a striving for enduring beauty that they sought during a time of enforced darkness.

“I strive to get the light,” Thomas said. “The atmospheric effects in Alaska are riveting.”

While the three came together for the show, their paths to Alaska and to art varied widely. Thomas is originally from England and came to Alaska in her 20s to mush. She spent 54 years in Fort Yukon and said that her identity is deeply tied to the Gwich’in ways she needed to adopt to live there successfully. Since relocating to Fairbanks, she has returned to art after decades of pursuing other interests. “This is, go forward or bust,” she said. “My identity is now artist.”

Kinne has long been a fixture in local arts circles. She came to Alaska from Washington state in the 1970s to work in a cannery, and like so many, never left. A former gallery owner and longtime participant in local events, she said, “I love those that actually step forward and say, ‘I’m an artist.’”

That’s exactly what Hullavarad did. Born and raised in Pune, India, work brought her and her husband to the United States and ultimately Alaska. She holds a doctorate in physics, but has painted since childhood. She said a series of accomplishments convinced her to pursue art professionally. Beginning with a magazine contest in India that she won as a child, she had always dabbled in painting. Since coming to Fairbanks, she’s had work displayed in a group show where it sold, as well as at the fair, where she won ribbons.

“These achievements kept encouraging me to paint more and more,” she said. “I started dreaming about having my own show.”

For Hullavarad, this is her first time being a featured artist, but she wanted to share the limelight. So months ago as she was planning for the exhibit, she asked her good friend Kinne to join her.

Kinne was initially hesitant, feeling she didn’t have much to display at the moment. But in the meantime, she had been experimenting with fabric art, which she’s pursued since she closed Gallery 49 in 2014. Her process involves first composing a watercolor painting of what she envisions, and then, using that as a guide, recreating the scene using fabrics. These mirrored images are among the works on display. Thomas, meanwhile, had been hoping to have a show and, when she learned months ago that there would be space to take part in this month’s exhibition, she jumped on the opportunity.

Although the show fell together as much through serendipity as planning, the three women’s works are complimentary to each other. Each in their own way had felt confined by the past year-and-a-half. Hullavarad was unable to return to India to visit family and friends, watching from afar as the pandemic ravaged the country of her birth. Kinne, a relentless global traveler accustomed to hopping on airplanes and jumping from one country to the next, was forced to remain in place. And Thomas was adjusting to her new home in Fairbanks, even as much of the town shut down to quell the spread of the virus. Meanwhile, news reports from across the country brought word of upheaval and deep divisions.

For all three, one way of coping was to direct their attention to the things we hold in common, and that’s the beauty of nature, our shared landscapes, old buildings that have long histories, and other bucolic scenes. Kinne said for her, it’s a way of finding personal peace and solace, and hopefully through art, building bridges across political divides that seem irreparably split.

During the peak of the pandemic, Kinne had taken part in Zoom meetings with other local artists. Often they would each sit silently in their own homes, quietly focused on their individual works, but connected virtually, maintaining personal connections even in isolation. “It built community,” Kinne said.

Hullavarad spent the time painting and pursuing her dream of her first show. Kinne helped her learn to prepare her works for display. “Thanks to Nikki for all her for all her training in matting and framing,” she said. “I learned something new, it’s been great.”

The two met Thomas when she applied for and was granted the remaining space in the gallery. Thomas had, on the advice of her PE instructor, been painting relentlessly during the pandemic as one means of remaining physically active. She said her return to art has her exploring styles and discovering new avenues for her work.

“We all need to keep exploring,” Kinne said of the work the three have engaged in. Their disparate personalities and backgrounds have come together in a show that addresses our shared present circumstances, finding unity through art. “You have the audacious, you have the ‘I need this to be on my life goals,’ and you have the reluctant. You have England and India and America,” Kinne concluded. “And we’re all Alaskan.”

Works by Nilima Hullavarad, Teresa Thomas, and Nikki Kinne are on display at Well Street Art Company throughout July, at 1304 Well St. Hours are noon to 6 p.m. Tuesdays through Saturdays.