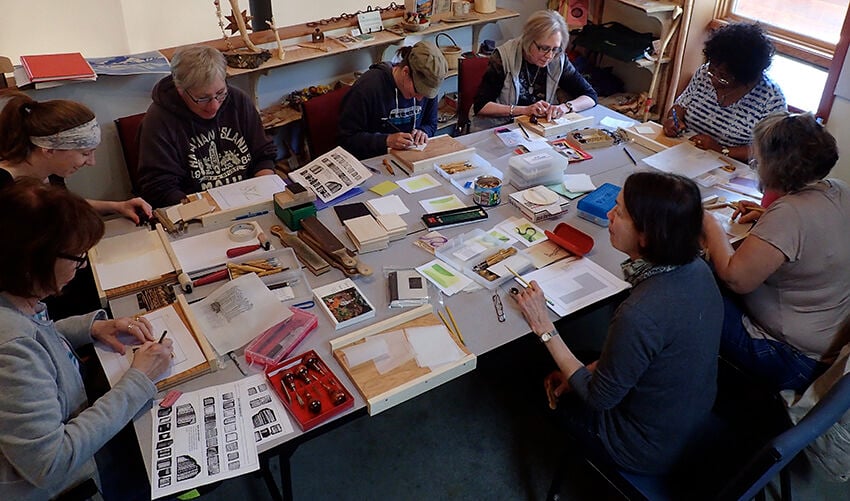 NBG members at work during the Imprints project. 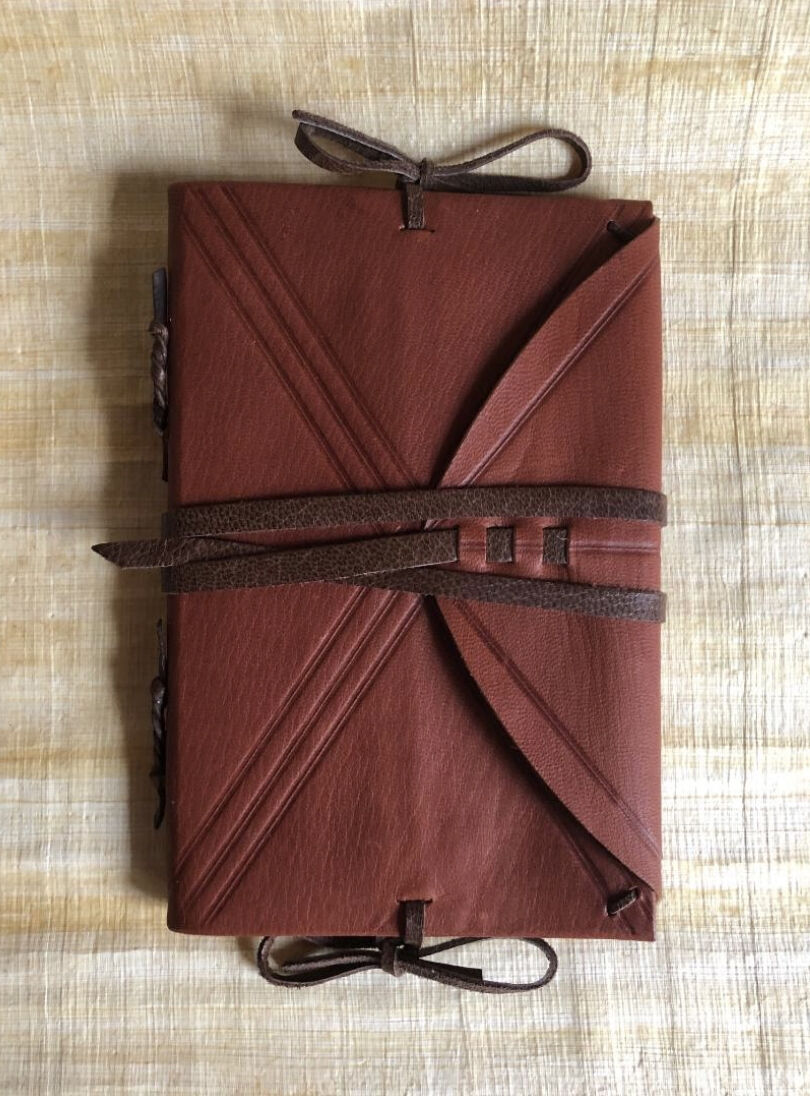 Nag Hammadi book made by NBG member, Ashley Thayer, based on an historic 3rd-4th century codex. She will teach an NBG workshop in January using authentic materials to replicate the traditional skills and materials originally used. 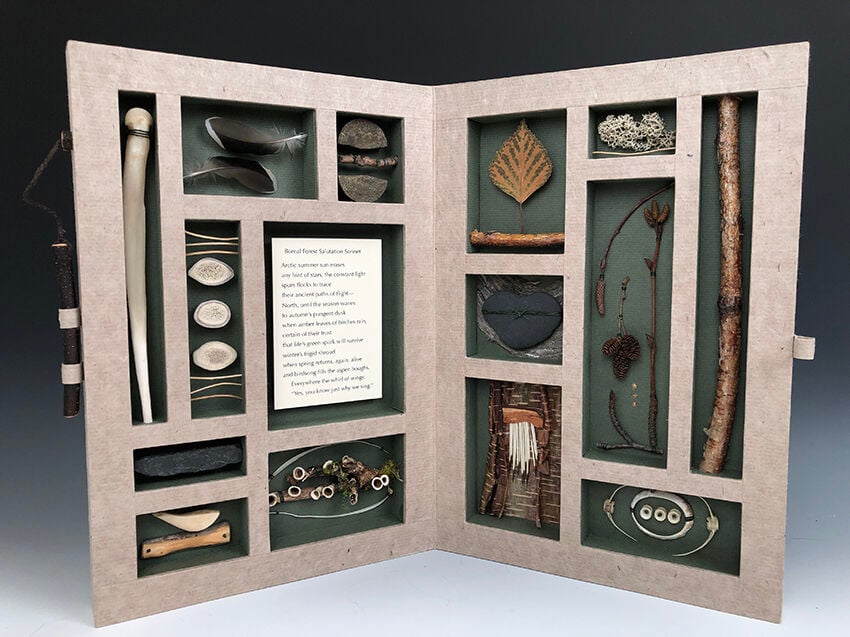 A sneak peek of what the Northwoods Book Art Guild is capable of. "Boreal Forest Salutation," box book by Susan Campbell.

NBG members at work during the Imprints project.

Nag Hammadi book made by NBG member, Ashley Thayer, based on an historic 3rd-4th century codex. She will teach an NBG workshop in January using authentic materials to replicate the traditional skills and materials originally used.

A sneak peek of what the Northwoods Book Art Guild is capable of. "Boreal Forest Salutation," box book by Susan Campbell.

"Long ago, the wealthy and the church owned books, not the common people. Now we take book ownership for granted,” Susan Campbell said. “But as bookmakers, we don’t take that for granted. We feel some part of this history, and that’s really exciting. To be creative and to bring that historical knowledge, to learn about it, and then to make new books based on traditions.”

Campbell is the current president of the Northwoods Book Arts Guild, which is celebrating its tenth anniversary in November. But she will be the first to emphasize that the organization is a group effort, something that was intended from that its earliest inception. It’s a spirit even found in the group’s name. “There was a conscious decision to call it a guild,” Campbell said. “Historically guilds were people who worked together. There was collaboration.”

This collaboration will be on display throughout the coming month at Bear Gallery in Pioneer Park. The Guild is putting on a group show called “Books As Art 3.” It’s the third local exhibition by members of the Guild, who create what are called artist books.

Artist books shouldn’t be confused with sketchbooks. Margo Klass, a longtime local artist and master bookmaker who was crucial to bringing the Guild into being, explained, “It’s a work of art that happens to be in book form. The hallmarks of an artist book are sequence, which could be text, images, or both; time, because it takes time to see it; visual elements; and structure.”

Klass is an art historian and medievalist who, early in her studies, encountered books that predate the invention of the printing press. She was enthralled by their beauty, and determined to learn how to make them, becoming a master bookmaker in the process.

The practice of employing historic processes to create modern volumes as works of art has been a growing movement around the world in recent decades. Countless bookmaking methods have been devised over many centuries, and people across the globe are reviving these techniques to hand craft beautiful books that can be aesthetically enjoyed for their appearance as well as their contents.

“People have been doing this for hundreds of years, so you feel this connection with bookmakers,” Campbell, a retired elementary school teacher, said. She took a course in bookmaking from Klass in the aughts, and was one of eleven people present at the 2011 meeting when the Guild was formed. From that seed, the group has grown to 70 members who develop new skills and then pass them onward as students in the Guild become teachers.

The Guild creates books in a wide range of styles. Campbell is particularly drawn to stab binding, a Japanese method which involves stabbing holes near the left edge of a book’s paper and cover, and then sewing them together using decorative stitching.

“What interests people in the Guild is to learn these old types of structures and bindings,” Campbell explained. For the most part, books are held together either with adhesive or nonadhesive binding, although the two methods are sometimes combined.

The Guild rents studio space in a building off Airport Way near University Avenue, where large tables offer members ample work space to let their creativity roam. They also have three historic printing presses, including a 1910 Golding Manufacturing Company Pearl Model 3. “One of our members found this outside an antique store in town being sold as a lawn ornament because it was so rusted and broken,” Campbell said.

The member purchased the press and donated it to the guild, where Bruce Campbell (no relation to Susan) painstakingly restored it to working condition. He’s also taught himself to create essential bookmaking tools, which he gives to the group.

The Guild has established Northwoods Press, which produces limited runs of numbered volumes of books by members. These might be printed, or they could be hand-lettered and painted, but they are all unique personal artistic expressions. Klass said that bookmaking is wide ranging, and needn’t necessarily include pages as readers generally think of them, noting that the form even extends itself to sculpture.

Three chapbooks have been printed on the Golding press, Campbell said. The Guild also published “Imprints” in 2019 as a fundraiser. Containing poems and artwork by Guild members, it was a two year project involving 33 people who invested over 1500 hours into producing 32 copies of the hand-made book encased in a clamshell box.

When the pandemic hit, the Guild used grant money to move classes online, and the response was very positive. “People that had never heard of us took it. So they were new to the Guild” Campbell said. The chance to meet others though Zoom classes while learning new skills helped people overcome the isolation of last year’s shutdowns.

In-person classes have since resumed, although class sizes are limited. Among the upcoming offerings will be a winter class on Nag Hammadi binding, the oldest known form of bookmaking, which originated in Egypt and predates Christianity. It’s how the Gnostic Gospels, discovered in 1945, were held together. Coptic binding, another early Christian era method, is also taught through the Guild. Students make books by incorporating new materials into these ancient art forms.

The Guild has partnered with many local organizations. They have offered classes through the Folk School since the beginning, and have display cases at Noel Wein and Rasmuson Libraries. They created new covers for limited editions of several University of Alaska Press poetry books, and they restore damaged rare books that are donated to the Literacy Council for sale through Forget-Me-Not Books.

With the show at Bear Gallery, resumed classes, a book by Klass in production, and more, the Northwoods Book Arts Guild is back up to speed and welcoming new members who are looking to learn enduring art forms. “As bookmakers,” Campbell concluded, “we are making meaning of our lives and representing that in handmade books.”