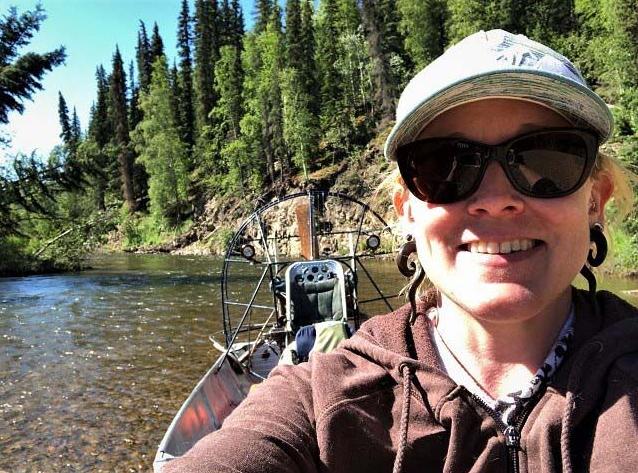 Metal artist Riva Sazama is seen here on the Chatanika River in 2020. 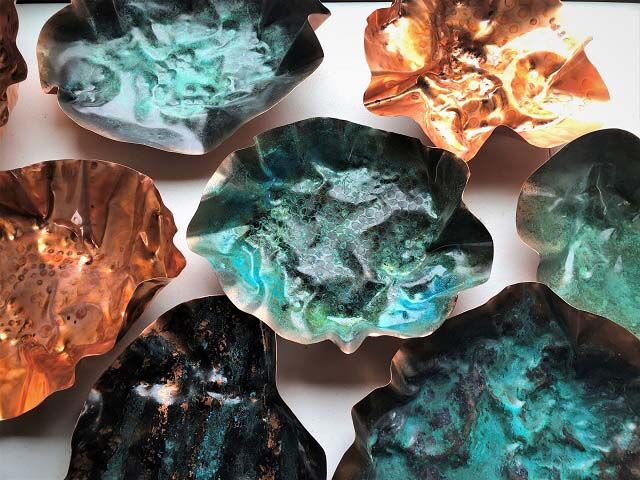 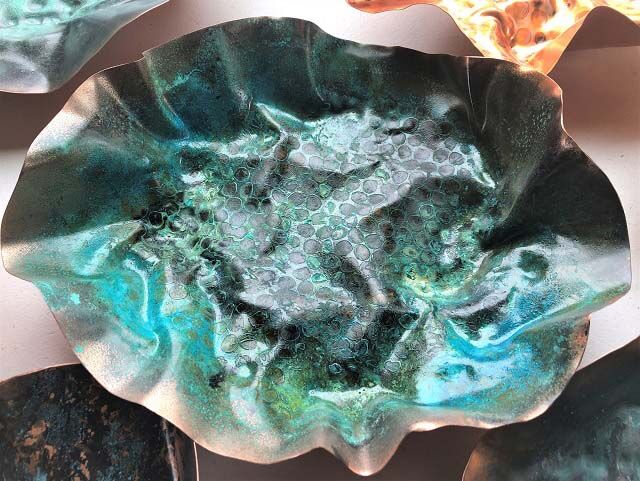 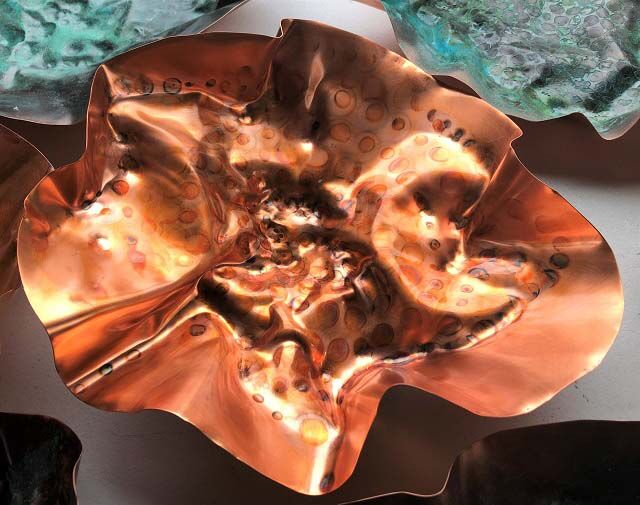 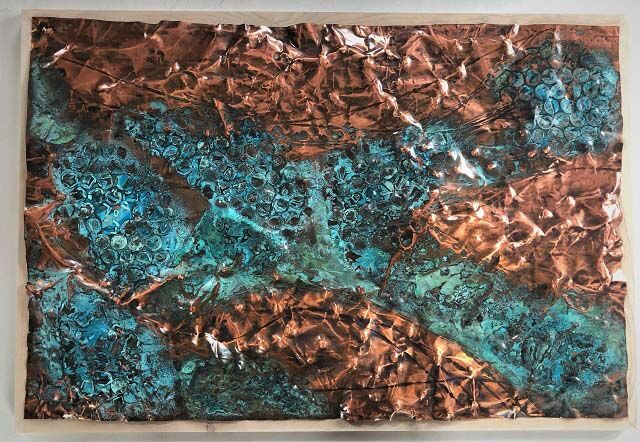 “middle of the river in a lawn chair" hammered copper, patina, lacquer, mounted on stained wood, 2021

Metal artist Riva Sazama is seen here on the Chatanika River in 2020.

“middle of the river in a lawn chair" hammered copper, patina, lacquer, mounted on stained wood, 2021

"When I started working with the metal, it was this perfect marriage of working both 2D and 3D at the same time,” Riva Sazama said about the media that has become the focus of her art carer. “You have the physicality of this metal, and how you work the surface made sense to me as an abstract painter. So I got very involved with patina work. And after eight years I feel like I’m still just beginning to understand it and scratch the surface of it.”

Sazama, whose work will be showing at the Bear Gallery in Pioneer Park throughout June, studied sculpture for her undergrad and graduate degrees. But, she said, “Once I started the copper work, it just kind of clicked and I’m still just going with that right now.”

Sazama followed a winding path to Fairbanks and her current pursuits. She grew up in Wisconsin where, she said, “I first started studying art. I fell in love with it through a community college. I did two years of all art there and it was wonderful and incredibly formative for me as an artist.”

While she enjoyed school, she felt confined by Wisconsin and started traveling. Drawn to the West, she settled in Oregon for a brief spell. But while trying to find the right art school, “I heard there was this amazing little liberal arts school called Johnson State College, in Johnson, Vermont. It was amazing. My undergrad was fantastic. I had amazing professors, and an amazing experience.”

Sazama earned a bachelor’s of fine arts in sculpture. At the time she was working in mixed media, hand-built construction, using “yarn, branches, wax, asphalt emulsion, pantyhose, it was all over the board.”

Then Sazama’s travels continued, spurred partly by her then-husband’s job, which kept him moving about the country. She began her master’s studies in Montana, but when her husband was transferred to Anchorage, the couple moved north in 2009.

Sazama quickly fell in love with Alaska, but wasn’t keen on Anchorage. “I wanted to live in the Interior and have the Alaskan experience,” she said. So she applied to the University of Alaska Fairbanks, where she continued her sculpture studies and graduated with a master’s in fine arts in 2012. “Pretty much right after I graduated with my MFA,” she said, “I got involved in this metal work.”

She also found herself on the move again. Her husband’s job kept the two of them hopscotching across the country. “Then I decided I’d had enough and wanted to come back up to Alaska. So that’s what I did in 2018.”

Upon her return, Sazama settled into a cabin near town and launched her business, Copper Works by Riva Sazama. In addition to fine art pieces, she expanded into utilitarian objects as a means of generating income.

“I found I really enjoy making wearable art,” Sazama said. “I do earrings, which are one of a kind, and I’ve had very good reception with those. Also small dishes.” She began distributing her work through gift shops and other stores around the state, and her business was off to a quick start. Then Covid struck and the stores she was selling to cut back on their buying. First Friday openings went away. Bazars and other events were canceled.

“That was incredibly heartbreaking, really,” she recalled.

To cope, Sazama focused on what was in front of her. “I still made myself work in the studio, even though I didn’t know if I would be showing or selling,” she said. “It was just something you do as an artist.”

She also got out into the lands she loves. “For me, it was specifically being on the river, in my boyfriend’s airboat, on the Chatanika. That was my playground, my solace, my happy place, my way to just be OK with things in the world. And have all this beauty just overwhelming.”

These two passions are fused in Sazama’s show, which includes multiple pieces depicting Alaska’s natural beauty on sheets of copper that have been hammered and then colored with patinas. Two of the major works show birch trees, while a piece she described as her personal favorite, “middle of the river in a lawn chair,” is an aerial view of Interior Alaska’s rugged terrain, with hills and valleys leading into waterways.

“Landscape does come in to a lot of things I do in one way or another,” she said. This can be seen in her platters as well. Though much smaller than the major pieces, their rippled bases convey scenes that Alaskans will quickly recognize as symbolic of home.

Sazama said she starts with rolls of copper, then manually manipulates it with tools and her hands. This is followed by cleaning and degreasing. Then she moves to patinas and coloration. “I use a bunch of different patinas. Most of them I get the chemicals and mix them up myself,” she explained. The next step is applying several layers of a metal lacquer to seal the piece so that the oxidation process is halted. Then comes framing and mounting.

Sazama described herself as an intuitive-based artist. She starts something without a predetermined objective, and begins working with the metal and letting the final product reveal itself. “Sometimes it’s easy, and sometimes a piece fights you and struggles,” she said. “Sometimes you’ve got to let it be what it wants to be.”

Sazama said during the height of the pandemic, she kept having conversations with other Alaskans about how Alaska itself compensates for other losses. She said the consensus from many was, “Yes, it’s challenging.” Then, pointing to the landscape, they would add words to the effect of, “But look at what we have.” So she titled of her show “A good place to be.”

After a year of lockdowns and confinement, Sazama’s show is a reminder that, compared to much of the world, Alaskans have been quite fortunate during this period. “It’s a celebration of the beauty of Alaska,” she concluded.

Riva Sazama can be found online at www.copperworks.space. Her show, “A good place to be,” will be on exhibit throughout June at the Bear Gallery, on the third floor of the Alaska Centennial Center for the Arts in Pioneer Park, 2300 Airport Way. Gallery hours are Monday through Friday, noon to 6 p.m.