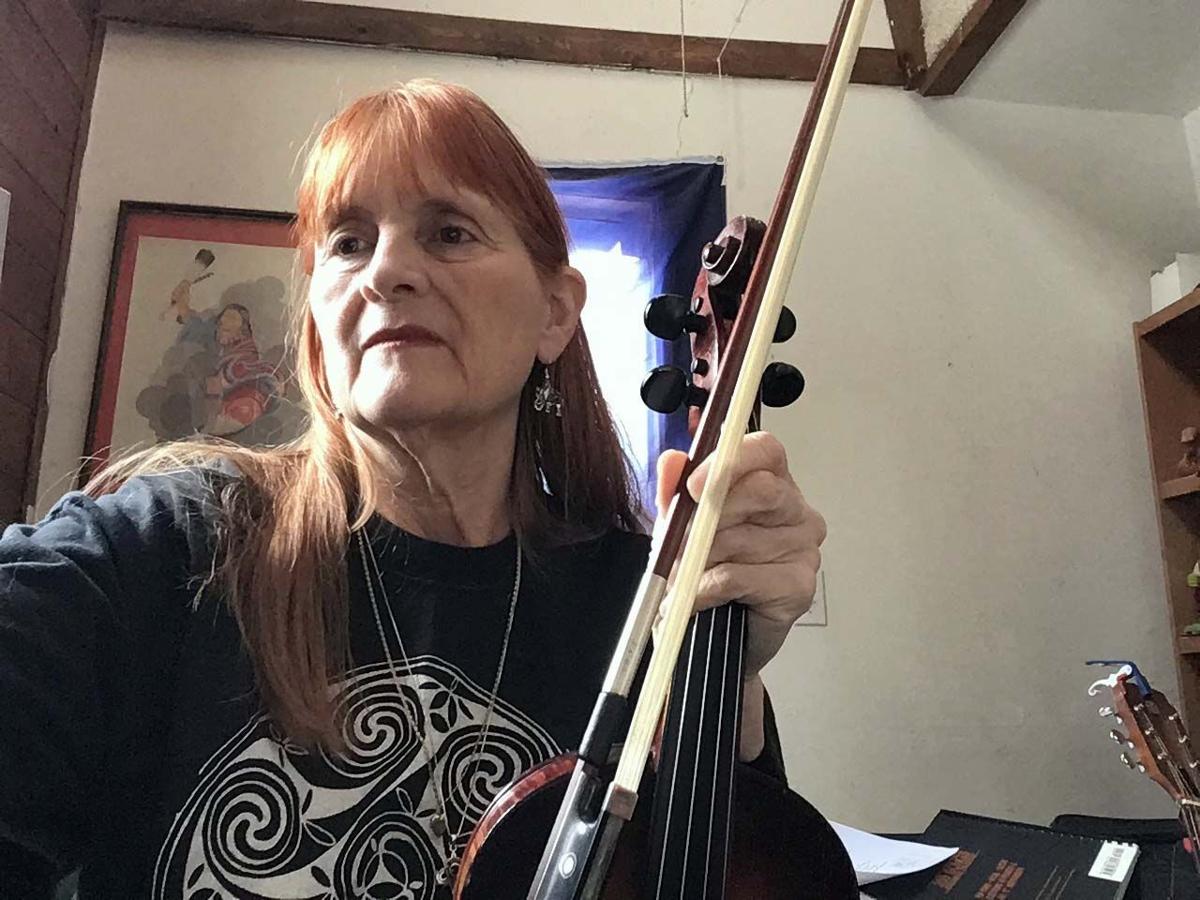 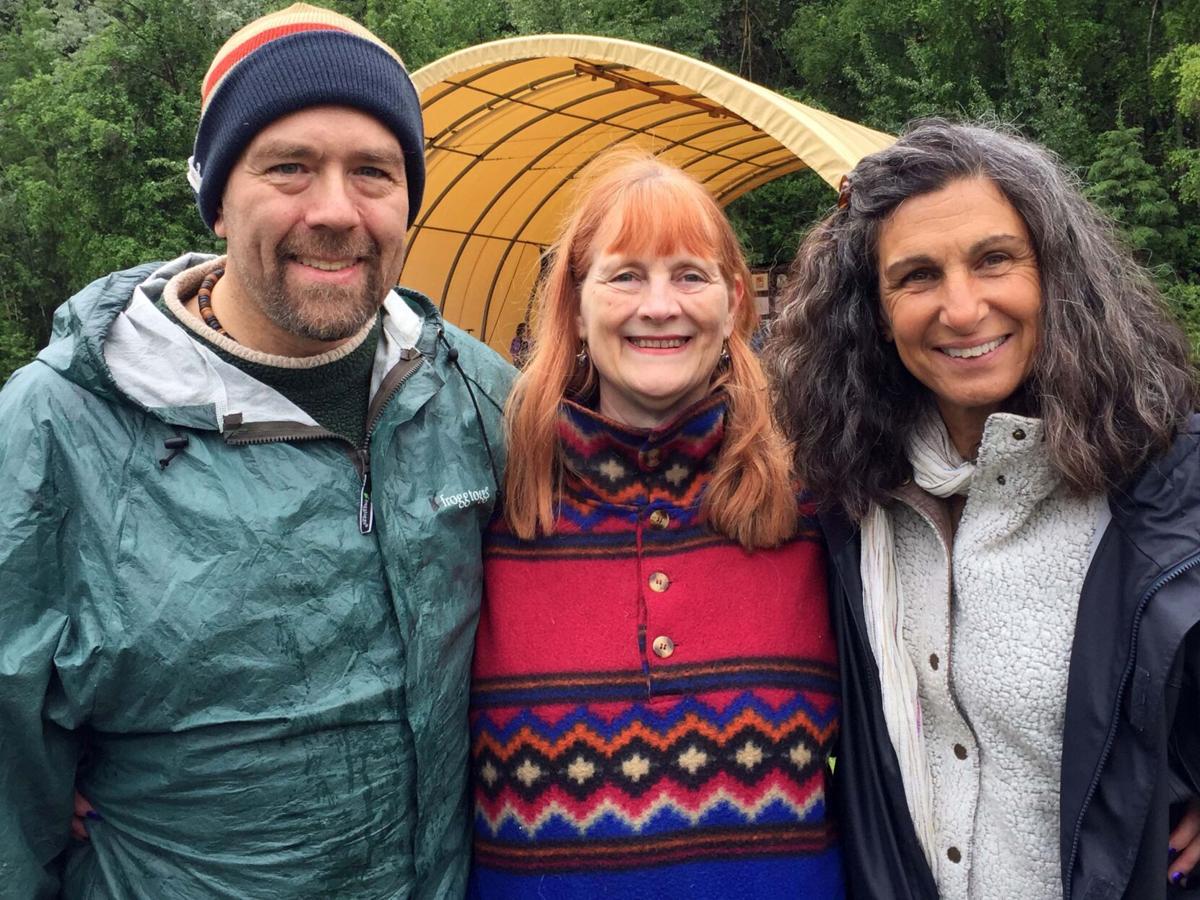 The Fairbanks band Ptarmigan consists of, from left, Eric Stevens on bass, Jean McDermott on ukulele and fiddle, and Mary Pagel on guitar.

The Fairbanks band Ptarmigan consists of, from left, Eric Stevens on bass, Jean McDermott on ukulele and fiddle, and Mary Pagel on guitar.

On Christmas Day in 2002, Jean McDermott was on a plane bound for Fairbanks, coming to visit a friend. It was her first trip to Alaska. Smoke began to fill the cabin of the brand new jet. Juneau was too stormy for an emergency landing. So the plane was diverted to Yakutat.

Once they had landed and the passengers had safely deplaned, the pilot, who noticed she had a violin case, asked McDermott to play music for the stressed out passengers. “There’s a bar right there at the airport,” she recalled, “and it’s full of giant Alaskan animals, stuffed, staring at you from all the walls. So I went and entertained people in this crazy bar, and that’s the first thing I did in Alaska.”

Three months later McDermott was on her way to Alaska again, this time driving. After a life of frequent moves, she had found the place to call home. The longtime local music teacher and performer has been here ever since.

McDermott spent her earliest days in Michigan and Omaha before her family moved to the East Bay region of California. Her parents were both musicians, and the family spent evenings playing and singing. After the lights went out, she said, “I remember laying under the bed listening to Gilbert & Sullivan 78s that my grandfather had given us. On a record player, in the dark, just enjoying the music.”

McDermott started learning violin at a young age and played in school orchestras. “If it wasn’t for public school music, I probably would not be a music teacher today.” she emphasized. Meanwhile, she learned singing in church. “The way we picked a church was, when we came to a new town, we would go to a church, and if the music was good, and the pastor or minister was moderate, then we would go. So I was exposed to several great choir teachers in church.”

As a teenager in the late 1960s she frequently went to San Francisco, where the music scene was vibrant. She began playing guitar and singing folk songs and more. “I’ve never been able to settle on one style,” she said.

As the 1970s set in, she kept expanding her musical palette while moving around California. By late in the decade she was in Oregon, where she played old-timey music and helped found the Eugene Folklore Society. She rubbed elbows with Bill Monroe, Ralph Stanley and Kate Wolf, but was simultaneously smitten by New Wave artists, especially Elvis Costello. She also loves the Ramones.

In the 80s she relocated to Albuquerque, where she gave fiddle lessons and kept learning new instruments, which she said is easier than one might think. “When you play music a lot, and you keep it in your head a lot, each skill builds on the next one. To play guitar and pick up ukulele is fairly simple. Because the fretted instrument rules are basically the same. You just need to learn new strumming styles and using your hands differently. But it’s not that different.”

It was needing a fresh start after getting divorced that initially brought McDermott, who has one son, to Alaska. Within a few weeks of her arrival, she was giving lessons at Music Mart while connecting with local musicians and playing around town.

McDermott was asked to provide remote music instruction to the school in Beaver, and later the Alaska Gateway School District in Tok as well. She would also provide distance classes to individual students when roads were bad. So she was easily able to adapt to online learning when the pandemic hit. She said the response has been very positive.

“People are really excited about it. I’m teaching people all over Alaska at this point. People need stuff to do and they really enjoy being able to visit with somebody, not to mention learn something new. It takes people away from their other stuff. It’s a nice brain break.”

Performance opportunities haven’t been so easily shifted to new venues. McDermott is part of a trio called Ptarmigan that has performed around town for several years. She plays ukulele and fiddle alongside Mary Pagel on guitar and bassist Eric Stevens. “Our motto is We Ain’t Chicken,” she said, referencing the Alaskan town of Chicken, which was, according to legend, named that because the residents couldn’t agree on how to spell ptarmigan.

“We figure at our age we can play whatever we want to,” she said, describing the trio’s eclectic repertoire. “We play ‘Mother’s Little Helper’ and ‘Paint it Black’ with ukulele, guitar and electric bass.” But, she added, “It’s been over a year and a half that we haven’t been able to play because of Covid.” She’s hoping live music events will begin to return this summer.

Asked to describe her teaching style, McDermott said she works to attune herself with each student individually, taking cues from their interests. “My emphasis is teaching people the way they learn the best.” Her description of her teaching philosophy seems to reflect her approach to life. “You don’t push the river. You go with the flow and be effective in the way that that person can be effective.

From her home in the hills outside of town, McDermott remembered a high school assignment she was given. She was told to write an autobiography and she still has what she wrote. “What I wrote was, ‘Someday I want to live in the woods and play the fiddle.’ And I reread that about three years ago and went ‘Oh my God! I did it!”

Jean McDermott offers music instruction for anyone ages 5 and older. She can be found online at inktrails.blogs.com/tartan_tundra_music. She is currently accepting students for summer lessons.