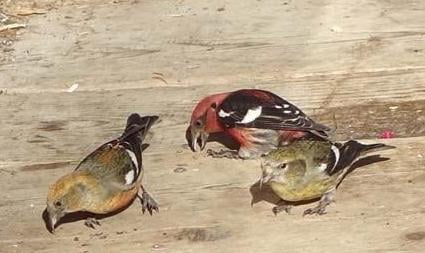 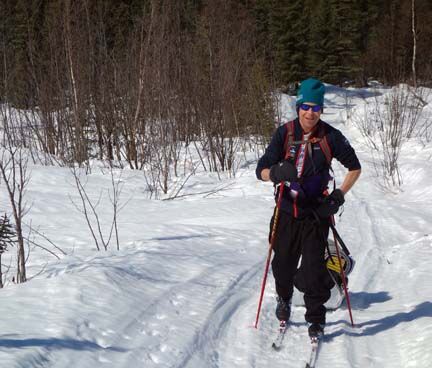 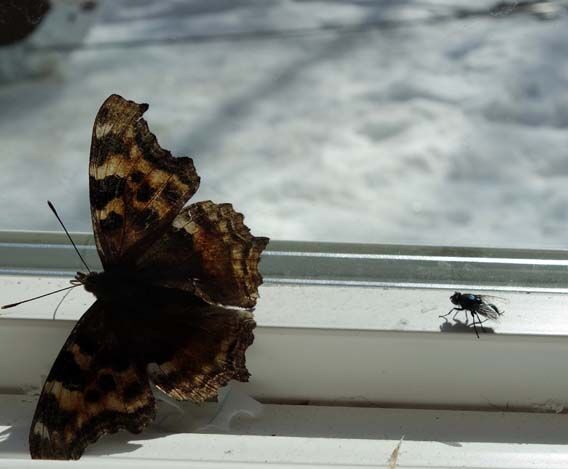 A Compton tortoiseshell butterfly and a housefly just released from dormancy by warm spring air.

Wolf tracks line a winter trail not far from Fairbanks. 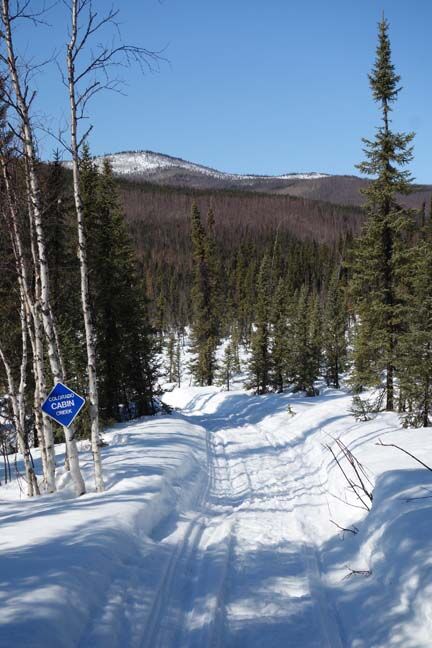 A valley in which the state of Alaska offers a rental cabin.

A Compton tortoiseshell butterfly and a housefly just released from dormancy by warm spring air.

Wolf tracks line a winter trail not far from Fairbanks.

A valley in which the state of Alaska offers a rental cabin.

On the final cabin trip of the spring, as my friend Andy and I skied along a packed ribbon of snow, the wolf tracks were a surprise.

“Looks like more than one,” Andy said, noting a stream of paw prints — each as large as our hands — pressed into the warming snow.

Seeing those tracks less than one mile from the road made me think of a recent study, one in which scientists concluded that just 3% of Earth’s surface is “faunally intact.”

Due to the disappearance of a few species like the Steller’s sea cow, Alaska did not make the cut of places with fully intact ecosystems. However, the authors of the study in the journal Frontiers in Forests and Global Change wrote that Alaska was one of the few places with wild patches somewhat close to what they might be without humanity. Alaska earned the honor along with parts of eastern Russia, northern Canada, the Amazon Basin, the Sahara Desert and the Congo Basin.

My dog Cora sniffed at a blue-white crater just off the trail where the wolf pack peeled off. We didn’t see any more tracks, but Andy and I knew we were sharing that quiet, snow-filled valley.

The wolves were then probably panting in the shade of spruce trees, as the April sunshine — all 15-plus hours of it — bore down on a ripening snowpack. Andy and I noticed that, for the first time in a long time, the air didn’t hurt.

I pulled off gloves and exposed my hands to the air. With my left index finger, I rubbed a cap of dead skin at the tip of my thumb. I had fiddled with a cookstove in subzero weather less than two weeks ago. The frostnip was like wearing a thimble.

Since then, a high-pressure system had shoved that bitter air out of the frosted swamps. After enduring a remarkable streak of days and nights that were colder than 40 degrees Fahrenheit since last October, we experienced a 90-degree temperature swing in the last week. The warm breeze brushing our skin made it unfathomable that the main water line at my house had frozen a week before.

The 55-degree day slowed our movement by increasing the suction between our ski bases and the trail, but Andy and I savored the warmth. The winter of 2020-2021 had been the first in many years that neither of us had pulled off our down jackets at the airport and walked onto an airplane pointed south.

We had earned this relaxed time on the trail. It felt something like the old days, when Andy would pull out his Alaska Atlas and Gazetteer and see a dotted line on the map, like the one from Tanana to Allakaket. Then came the phone calls to villagers, and the purchase of a few seats on a propeller-driven plane, our skis and packs stuffed into the wing compartments.

Our chassis might have a bit too much mileage for those trips, but we try to get out together now on a cabin trip during the easy-livin’ time of late spring.

And we had hit it — a period of nights with below-freezing temperatures that preserve the hard-packed snow, and warmish days during which you can linger without penalty.

The change was both predictable and unsettling; our Covid inertia of the past year was bumping up against the sudden transition from a hard, black-and-white world to a buzzing, squishy, musky one.

When we reached the rented cabin, six miles from the road, the air inside was stale and cold. We propped open the door with a chair to let the warm in, an act that would have been absurd a week before.

The back of winter had broken. This was confirmed by a butterfly — a Compton tortoiseshell — that had folded in dormancy on a cold morning last fall. It had remained not quite alive or dead until the extreme warmth of the sun baked the south side of the log cabin where it had clung. Released, the butterfly fluttered, erratic, in the wind.

On the porch of the cabin, we enjoyed our favorite camping innovation of the last few decades — single-serving instant coffees in neat packets. Around us, though we couldn’t see it happening, the stems of trees swelled like bratwurst with the sudden availability of free water.

As we sipped our coffees, we noticed other wild creatures.

White-winged crossbills, whose yellow-snow attraction I wrote about a few weeks ago, flapped down to the porch. There, even with us close by, they probed their twisted beaks into cracks between the boards. If we squinted, we could see their tongues dart into the seams. There must have been some salty treasure within the cabin sweepings.

Those crossbills had spent all winter with us here in Interior Alaska. Billions of other tiny beating hearts were then heading toward us, within the feathered bodies of songbirds. Kinglets and juncos and warblers who wintered in the tropics would soon fill those woods. But we did not detect any newcomers just yet.

The migrants’ pantry door, though, was swinging open. A few moths and gnats were on the wing, within congregations that hovered in the sunshine between spruce. We noted no mosquitoes, maybe because the early-emerging “snow mosquitoes” survive the winter on the ground, which was still beneath a foot of wet snow.

Their whining absence was more than fine with us. We cradled our mugs and talked of trips past. We chatted about the hikes yet to come on the distant ridges: miles that would tick away slower than the ones before, appreciated more than ever.