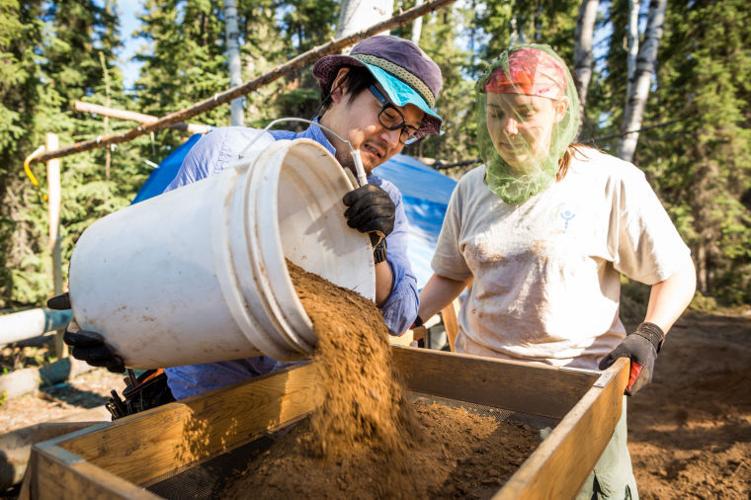 Yu Hirasawa, a doctoral student at Keio University in Tokyo, sifts through dirt at the Swan Point archaeological site on June 7 with Haley Huff, a student from the University of Alaska Anchorage. 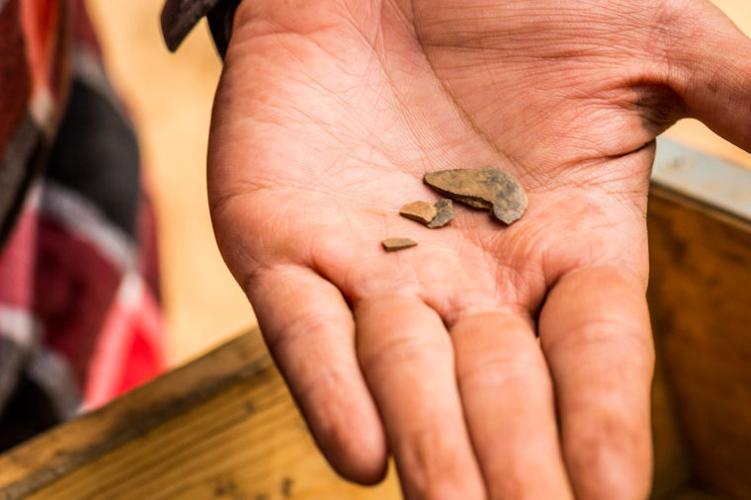 Microblade fragments at Swan Point, one of the earliest human settlements ever discovered in Alaska. It contains evidence of humans hunting Mammoths.

Yu Hirasawa, a doctoral student at Keio University in Tokyo, sifts through dirt at the Swan Point archaeological site on June 7 with Haley Huff, a student from the University of Alaska Anchorage.

Microblade fragments at Swan Point, one of the earliest human settlements ever discovered in Alaska. It contains evidence of humans hunting Mammoths.

FAIRBANKS, Alaska - On a small hill surrounded by boggy muskeg in the Tanana River Valley, prehistoric skin scrapers made of schist, polished slate tools and glass beads were uncovered in the last week.

Based on the design of the tools and the way the animals were butchered, it appears to be an Athabascan campsite from the turn of the 20th century.

“These are very typical Athabascan tools. But you usually think of polished stone tools with the Eskimo area, not in the Interior, so it’s very interesting,” says Chuck Holmes, the archaeologist who first discovered the site several decades ago.

He’s leading a team of 10 graduate students and volunteers at the excavation through June.

Swan Point is just north of Delta Junction. You can see the Alaska Range to the south, the Yukon-Tanana Uplands to the north, and Donnelly Dome just across the valley.

Fourteen thousand years ago, long before the boreal forest of today, the views were even better.

“It was an open grassland and mammoths, horse and bison were roaming around. You would have almost a 360-degree vantage to see game coming and going. So this is a really good spot.”

That’s why many different cultures made the site their home over millennia.

“It’s the oldest, well-documented age we have for any humans in Alaska,” Holmes says. “It’s older than the oldest established culture in the Lower 48, known as the Clovis culture.”

He discovered the site in 1993 while working for the Office of History and Archaeology, part of the Alaska Department of Natural Resources. It was the first link between the Dyuktai culture of Siberia and Alaska.

“In that period the sea level was lower and there was a land bridge, Beringia, connecting Alaska with Siberia. Alaska was actually more a part of Siberia than the Lower 48,” Holmes says.

That’s because the Canadian ice shield—which existed until around 13,000 years ago—blocked the migration of animals and people between Alaska and the Lower 48.

How did they make the connection between the two groups?

“Think of a single-edge razor blade, long and narrow and sharp as heck on both edges,” Holmes says.

About an inch long, they were made of rocks like chert, obsidian and basalt and could be used to make precise cuts like an X-Acto knife.

These blades were inset into a projectile point made of ivory, bone or antler, similar to sticking razor blades into slots on a flat pencil. They were constructed as long darts and flung from an atlatal, which extended the throwing arm of the hunter like a lacrosse stick.

“It would make a very wicked deadly weapon.”

Yet it matches no culture in the Lower 48, suggesting the Dyuktai technology never made it down south. Where the oldest cultures in the Lower 48 came from is still hotly debated.

“The site is almost like an ivory workshop, where people are taking the ivory tusks and breaking them up and utilizing them.”

While many ivory tools had been found in Alaska, there was no evidence that people hunted mammoths — for example, bones with an arrow tip sticking out. So some archaeologists thought that humans had simply scavenged ivory from cutbanks thousands of years later. Radiocarbon dating of ivory and teeth from Swan Point showed otherwise.

“It became perfectly clear that people and mammoths were coexisting. The people were killing the animals using this microblade stone tool technology.”

Now they are digging their way toward the past, uncovering different cultures as they move down through the soil sediments. This summer, the group is also investigating 800-year-old hearths discovered last season that contain stone tools as well as burned, white bone fragments.

“We suspect this was a method of rendering the grease out of them, by boiling them in water and skimming off the grease.”

Swan Point is not only the oldest record of humans in Alaska — it’s also very intact.

“A lot of sites are disturbed by construction. This site was totally undisturbed. It was found in a test pit by archaeologists.”

Holmes will begin a comprehensive report on Swan Point after this season.

This column is provided as a public service by the Geophysical Institute, University of Alaska Fairbanks, in cooperation with the UAF research community. Molly Rettig is a science writer at the institute.