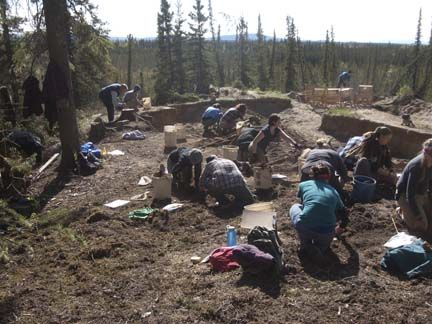 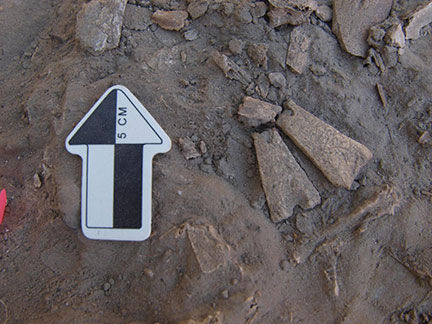 FAIRBANKS - At the edge of a spruce forest in Interior Alaska, archaeologists have unearthed bone pendants that might be the first examples of artwork in northern North America.

During the last two summers, teams led by the University of Alaska Fairbanks’ Ben Potter have expanded the breadth of the Mead Site, a white spruce bench that overlooks Shaw Creek Flats north of Delta Junction. Within the boundaries of the Mead Site, researchers have found what they believe are tent outlines. Inside the oval of what was probably a hide-covered structure 12,300 years ago, a student working with a trowel found a tiny bone pendant with delicate crosshatching on the edge.

“It made my heart stop when I saw it,” Potter said at a lecture recently at the UA Museum of the North in Fairbanks.

Made of bone, the pendants resemble zipper pulls. A second pair found at the site look like tiny fish tails. At the tapered end of each are broken remainders of a round opening, like the eye of a needle.

When Potter first sees an item emerge from tan river silt, his first thought is function. How did the piece help keep ice-age people alive?

“Were these toggles or buttons for clothing?” he asked.

But the closer he looked, the more he thought the pieces of bone were different.

“We think it might be a pendant, an ornament, maybe worn near the face,” Potter said.

“Art serves as a way to fix social boundaries,” Potter said. “‘This is our group, not yours.’ These could be a way to communicate. They could be the first evidence we have for social boundary maintenance (in high-latitude North America).”

Potter also wonders if the pendants are signs of women at the Mead site. The ice-age sites scattered throughout Interior Alaska are often hilltops or cliffsides used by hunters, presumably men.

At Mead and the nearby Upward Sun River site (where a team of Potter, UAF’s Josh Reuther and others have found the remains of three ice-age infant/child burials) the archaeologists have expanded their digging to broader area. That has rewarded them with the discovery of several tent areas that hint ancient people used both as base camp. Within the boundaries of those residences they have found no weapon fragments common to hunting and weapon-maintenance sites.

Within a Mead living area, they have found worked bone fragments, the size and shape of which suggest they were possibly on their way to becoming pendants. They have also found a brown bear jawbone with its pointy canine removed. Potter said he can picture someone wearing a necklace of bear teeth.

“You can imagine the association with strength and hunting skill,” he said.

The discovery of possible objects of art at the Mead site is a new clue in the detective story of ice-age Alaska, more of which is revealed with analysis of each summer’s dig.

Interior Alaska is a good place to find artifacts because of strong glacial winds that for thousands of years covered people’s campsites with loess, fine dust that flows out of glaciers. Loess has sealed off bone and other material that would rot if exposed to acid-rich boreal forest soils. The flour-like dirt has created nice layers that show scientists the people have used the same spots again and again.

From what’s left at the Interior sites, Potter and others think this area of ice-age Alaska was colder and windier than today with more poplars, grasses and sedges. Ice-age Interior Alaska also featured more game animals than are present in today’s boreal forest.

“We find exactly the same prey then as now, plus bison and wapiti (elk),” Potter said.

He and his colleagues are also finding bird bones, fish bones, including those of salmon, at the Interior sites. He thinks the ice-age Alaskans with artistic tendencies were “highly mobile foragers successfully adapting to a very marginal environment.”