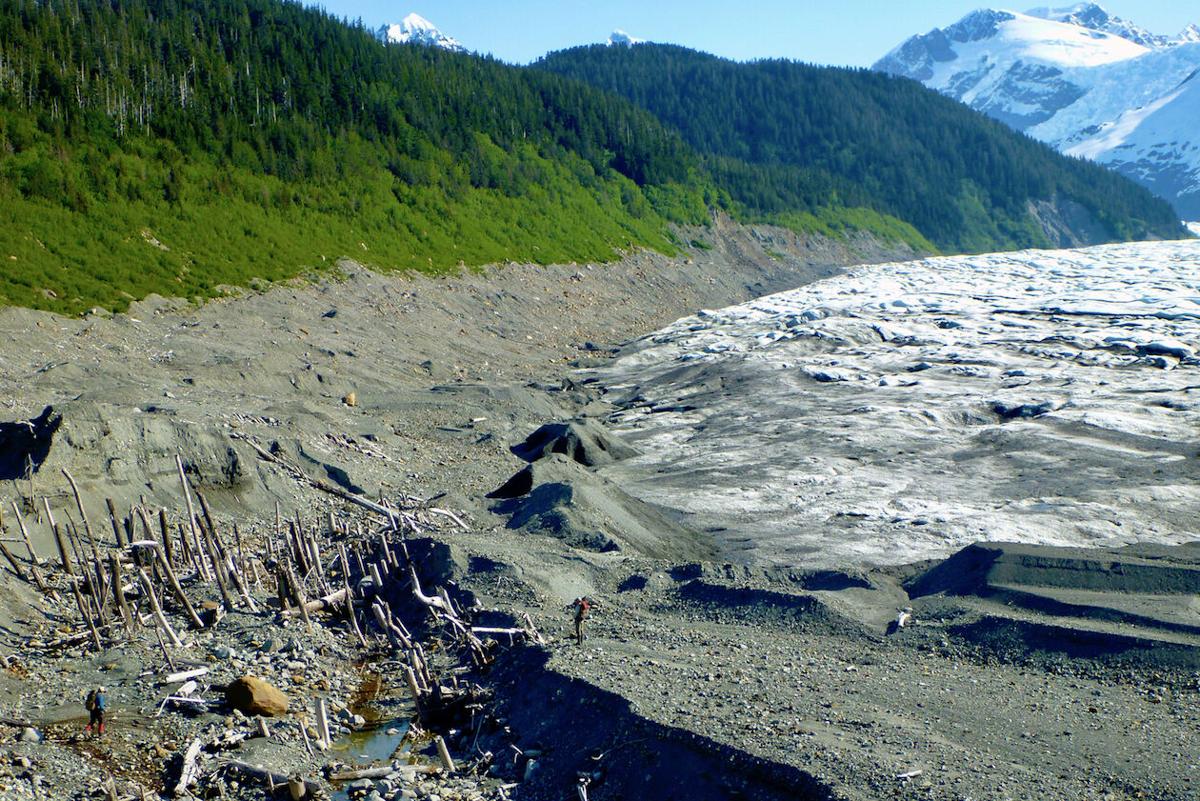 A “ghost forest” exposed as La Perouse Glacier in Southeast Alaska retreated. In the past, the glacier ran over the rainforest trees. Two people are also in the photo. Photo by Ben Gaglioti 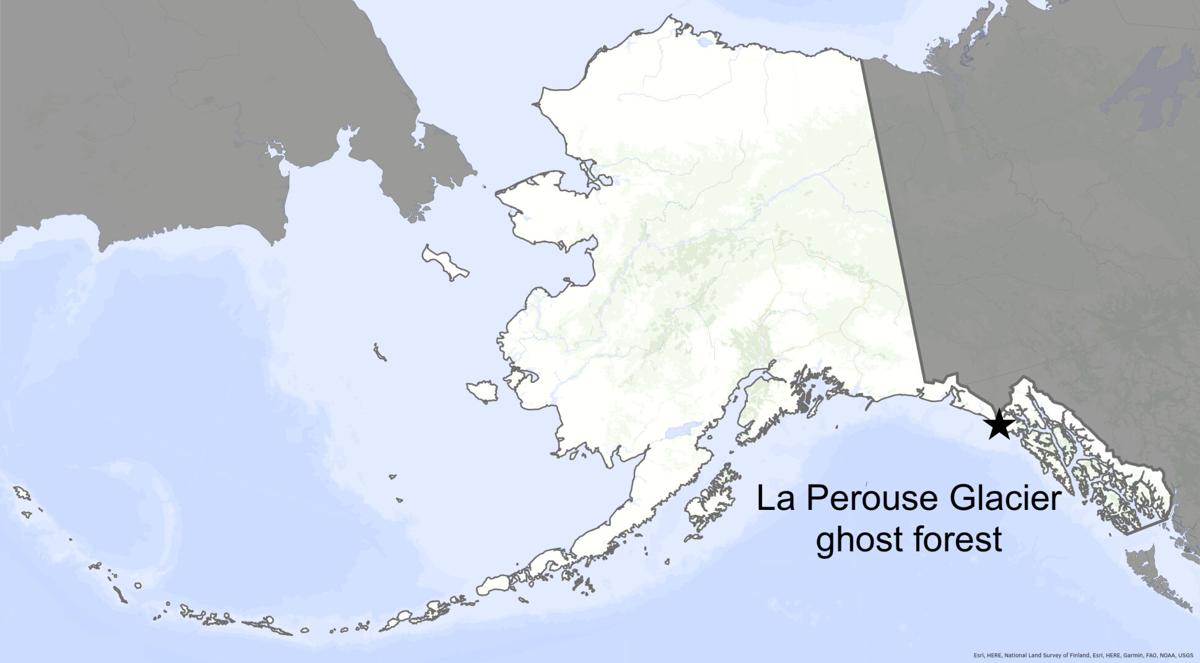 A “ghost forest” exposed as La Perouse Glacier in Southeast Alaska retreated. In the past, the glacier ran over the rainforest trees. Two people are also in the photo. Photo by Ben Gaglioti

Soon, I will fly from Fairbanks to Yakutat, a wild corner of Alaska located at the elbow where Southeast connects with the rest of the state.

From there, I will climb into a smaller plane with scientist Ben Gaglioti. The pilot will land on a beach. From there, Gaglioti and I will hike to a “ghost forest” exposed at the terminus of La Perouse Glacier. This is the first time I’ve helped on a field expedition in some time. I am excited to see this wild country.

For background on some of the things I will be reporting on, here is a portion of a column I wrote about Gaglioti’s work last February:

As a few scientists hiked a path between the ice towers of a Southeast Alaska glacier and crashing ocean waves in 2016, they topped a ridge and saw massive tree trunks poking from gravel ahead. The dead, sheared-off rainforest stems pointed toward the ocean like skeletal fingers.

In this “ghost forest,” not visible to fisherman or others passing by on ships, the researchers had stumbled on something they just had to study.

Ben Gaglioti ponders the ecology of ancient landscapes at the University of Alaska Fairbanks Water and Environmental Research Center. He is leading a study on the ghost forest near the tongue of La Perouse Glacier, which flows from the St. Elias Mountains almost all the way to the Gulf of Alaska.

On that trip when he and his fellow researchers first saw the gray trunks of huge trees clipped off 20 feet above the ground, Gaglioti guessed their fate: La Perouse Glacier had run them over, after first shoring up the stems with gravel from its own outwash. The glacier had since shrunk backward, revealing the stumps.

Gaglioti and his colleagues — including UAF’s Dan Mann and Greg Wiles of the College of Wooster in Ohio — used tree corers to learn when the trees died, which told them about when the glacier advanced. They matched the growth rings with living rainforest trees that were nearby, but out of the glacier’s path.

They found that La Perouse Glacier bulldozed the trees some time between 1850 to 1866, around when the Civil War was happening and Abraham Lincoln was president.

By coring other living trees in the area, including western hemlock, Sitka spruce, Alaska yellow cedar and mountain hemlock, the scientists found that the ghost forest had established itself in the path of La Perouse Glacier by about the year 1206. That was many centuries before the glacier rumbled forward to consume them.

Why did the glacier overrun the trees?

About the time La Perouse Glacier was advancing, most of the world was experiencing cooler temperatures. Researchers call the period — from about 1250 to about 1900 — the Little Ice Age. Global temperatures then averaged several degrees cooler than previous centuries.

Scientists aren’t certain what caused the Little Ice Age, but these are possible reasons: lower radiation reaching Earth from the sun, aerosols from multiple volcanic eruptions that deflected the sun’s rays, changes in ocean circulation, variations in Earth’s orbit and tilt, and lower human population (and less agriculture, leading to the growth of more carbon-absorbing trees) due to the Black Death and other diseases.

While the ghosting of the forest during the Little Ice Age is interesting on its own, Gaglioti and his co-workers hope to use the site to find out more about how living things respond to changes. For example, trees in the living rainforest near the front of the glacier show different sensitivities to the times when glacier ice was quite near, acting like a freezer door left open.

They have found that mountain hemlocks did not react much to the much cooler temperatures brought about by the advancing glacier. Alaska yellow cedar and western hemlock were more sensitive to the cold breath of the glacier and the extended warmth left behind when it retreated.

In June and early July 2021, Gaglioti will download data from temperature sensors he placed in 2016 around the glacier and forest to get a better idea of hot and cool spots. He also wants to search for living trees that might be 2,000 years old.

If he finds such a Methuselah, Gaglioti wants to match its ring pattern with giants of the ghost forest, and other bleached trunks just now emerging from the ice of the glacier. From those, he might learn about ancient advances and retreats of La Perouse Glacier as it responded to the whims of past climates.

A few people emailed me last week after the column on the exotic tree plantation at UAF.

Trish Wurtz of UAF’s Institute of Arctic Biology, summed up a concern: “Mountain ash is not the only tree not native to Alaska that has naturalized,” she said. “What Anchorage-ites call ‘Mayday tree’ or ‘European bird cherry’ and Fairbanksans call ‘chokecherry, has naturalized and is now a serious invasive problem. The takeover of streamside sites by (this tree) in Anchorage is so bad that it is no longer legal for nurseries and garden centers to sell this species in the municipality.”

Since the late 1970s, the University of Alaska Fairbanks’ Geophysical Institute has provided this column free in cooperation with the UAF research community. This year is the institute’s 75th anniversary. Ned Rozell ned.rozell@alaska.edu is a science writer for the Geophysical Institute.