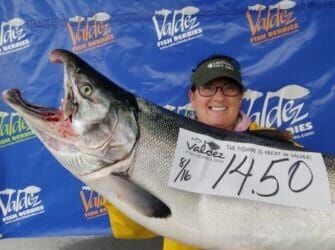 (Above) Penny Skuza of North Dakota reeled in the largest silver salmon in Valdez this year. Sukza’s 14.50 pound fish earned her $10,000 and the title of Valdez Silver Derby champion. 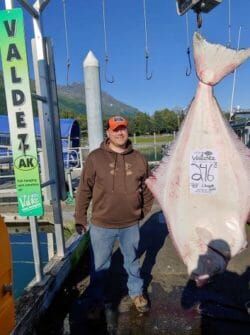 Steve Peichel of Minnesota won this year’s Valdez Halibut Derby with the 246.8 pound fish he caught on July 31st.

(Above) Penny Skuza of North Dakota reeled in the largest silver salmon in Valdez this year. Sukza’s 14.50 pound fish earned her $10,000 and the title of Valdez Silver Derby champion.

Steve Peichel of Minnesota won this year’s Valdez Halibut Derby with the 246.8 pound fish he caught on July 31st.

With thousands of dollars and thousands of pounds of fish on the line, the Valdez Fish Derbies wrapped up on Sunday, September 5th. Last weekend concluded another summer of competitive fishing, as hopeful anglers tried to take home the prize for the largest halibut and silver salmon caught out of Valdez in 2021.

The winner of the Valdez Halibut Derby was Steve Peichel of Frazee, Minnesota with a 246.8 pound fish. Peichel won by a significant margin, as his fish was over 30 pounds heavier than the second largest fish, a 214.8 pounder caught by Maren Russman of Lino Lakes, Minnesota. Rounding out the top three was Valdez local Terrence McCabe with a 202 pound halibut.

Peichel caught the winning halibut on July 31st, and managed to stay atop the leaderboard for over a month. His fish was also large in comparison to last year; the largest halibut of 2020 was a 224.0 pound fish caught by Fairbanks local Mickia Cenker. The record, which was set in 2017, remains safe. Thus far, no one has caught a larger halibut than the 374 pounder Frieda Wiley of Valdez reeled in four years ago.

While the margin of victory was great in the halibut derby, the top three finishers of the Silver Salmon Derby were separated by only about a quarter of a pound. Penny Skuza of Riverdale, North Dakota caught the largest silver of 2021. Skuza reeled in a 14.50 pound salmon. In second place was Pravat Phumiin of Valdez with a 14.20 pound fish. Third place went to Ron Schulz of Grape Vine, Texas, with a 14.10 pound silver. In 2020, the biggest silver was 14.88 pounds caught by Alisa Mac Innes of Tampa, Florida. Skuza caught her fish on August 16th.

The largest silver caught out of Valdez in derby history was 22.14 pounds. This occurred in two consecutive years (2008 and 2009), with those years’ winners being Valdez residents Derek Werder and Chuck Gard.

Along with the pride of having caught the largest halibut or silver out of Valdez all year, winners of the halibut and salmon derbies receive $10,000 each. Second place for both receives $3,000 and third place gets $1,500.