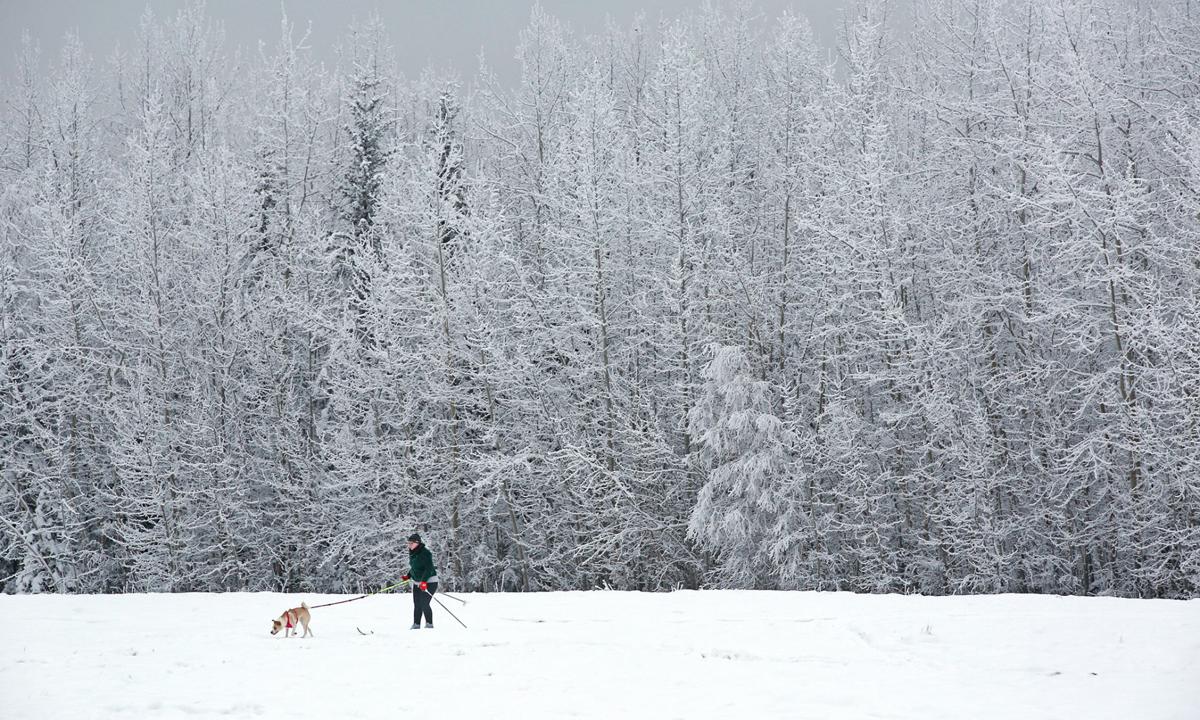 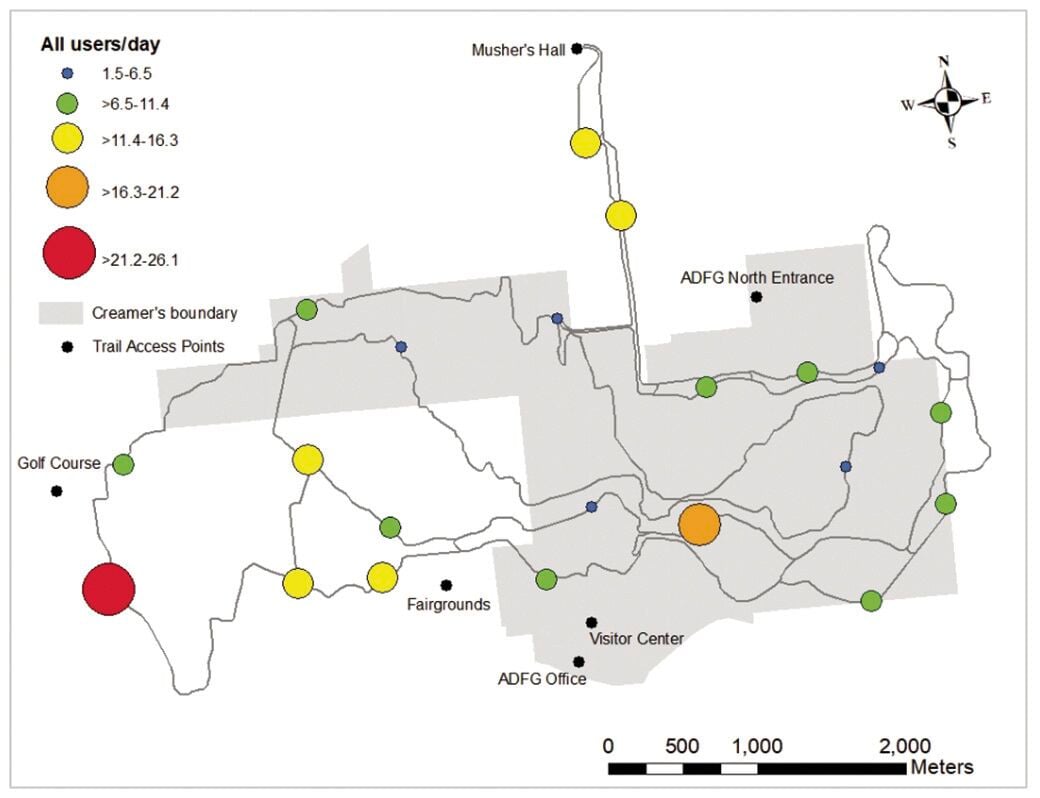 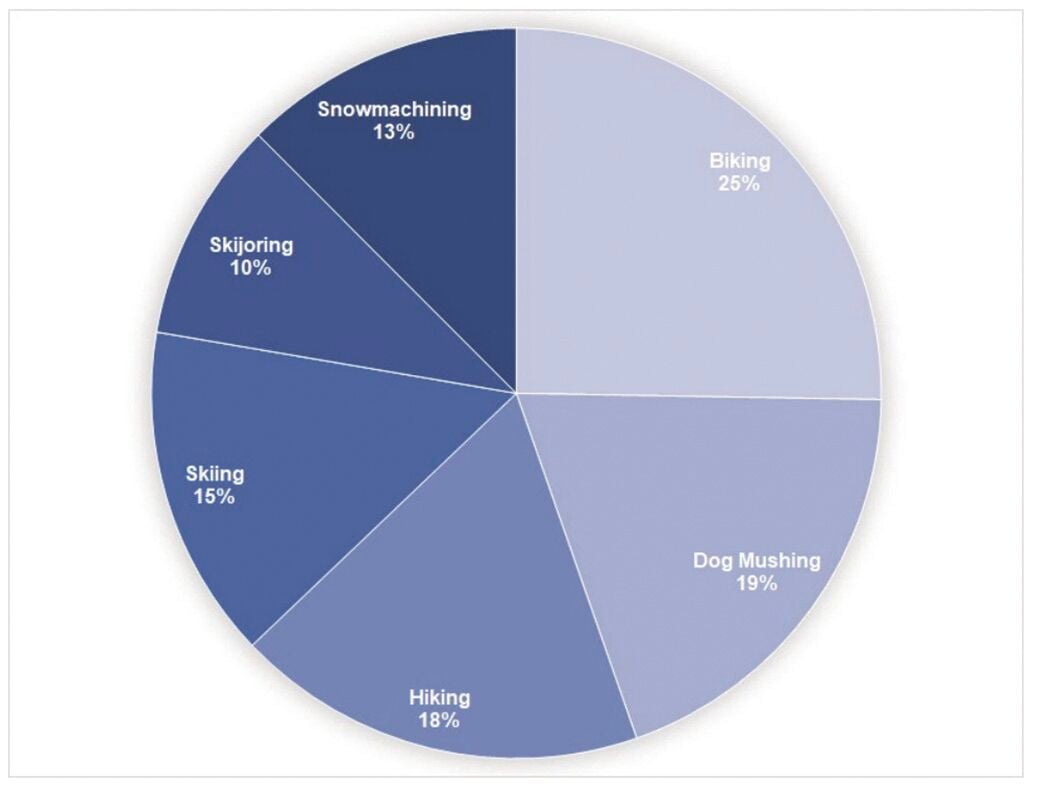 It’s a beautiful late-winter day in Fairbanks and you’re looking to get a little exercise and fresh air on your lunch break. One obvious place to go is Creamer’s Field Migratory Waterfowl Refuge, a 2,330-acre oasis of near-wilderness in the middle of Alaska’s second largest city.

It’s been a busy morning of Zooming, social distancing and dealing with the other frustrations of the COVID-19 pandemic, so you’d rather not run into too many people. Fortunately, a recent 133-day study that mapped the most popular user groups on the refuge’s winter trails can also help you find the best routes for solitude. It didn’t map the frequency and location of moose, so you’re on your own there.

The trails are popular in the winter with walkers, skiers, skijorers, mushers, snowmachiners and bikers.

The study, which took place over 133 days between November 2019 and April 2020, looked at who uses the trails the most, focusing on “safety, noise, and the disruption of groomed trails by different user groups.” It also aimed to identify the times and areas where overlap between user groups occurs in an effort to reduce future conflicts. Technically, that information will be used in future discussions about the management of the refuge.

It was conducted by Shelby McCahon, Todd Brinkman, with the Department of Biology and Wildlife at the University of Alaska Fairbanks, and Ryan Klimstra, a biologist with the Alaska Department of Fish and Game in Fairbanks.

They set up 22 camouflaged, motion-triggered cameras (one was stolen, so information from 21 cameras was used in the final tally) throughout the refuge’s trail system. The cameras were set 10 feet above the ground and aimed down the trail system, eventually covering about 90% of it. Steps were taken to avoid individual identification of trail users in order to protect people’s privacy.

The most frequent users, accounting for a quarter of the total, were bike riders, with dog mushers second, followed by hikers, skiers, snowmachiners and skijorers. Temperatures during the survey ranged from 36 above to 40 degrees below zero. Most of the trail users were active just above or below zero, although some were still out in the winter’s deepest cold.

The entire trail system at one time or another saw uses by bikers, mushers, hikers, skiers, skijorers and snowmachiners. Most of the mushers were seen on the northern and eastern parts of the trail, with access via the Mushers Hall and Jeff Studdert Racegrounds.

Most of the biking is concentrated on the southwest portions of the trail, with access from the Fairbanks Golf Course, Tanana Valley Fairgrounds and other informal access points.

The busiest times are weekends between noon and 3 p.m. March is the busiest month. Monday and Friday were the quietest days.

Hikers were spread out around the trails, with multiple access points everywhere but the eastern sections.

The takeaway? Chances are you’ll run into someone on some mode of winter transportation on the trails at Creamers, but the farther away from the points of entrance, the more solitude you’ll likely have. Take an extra hour for lunch. No one will miss you on the 1 p.m. Zoom meeting anyway.