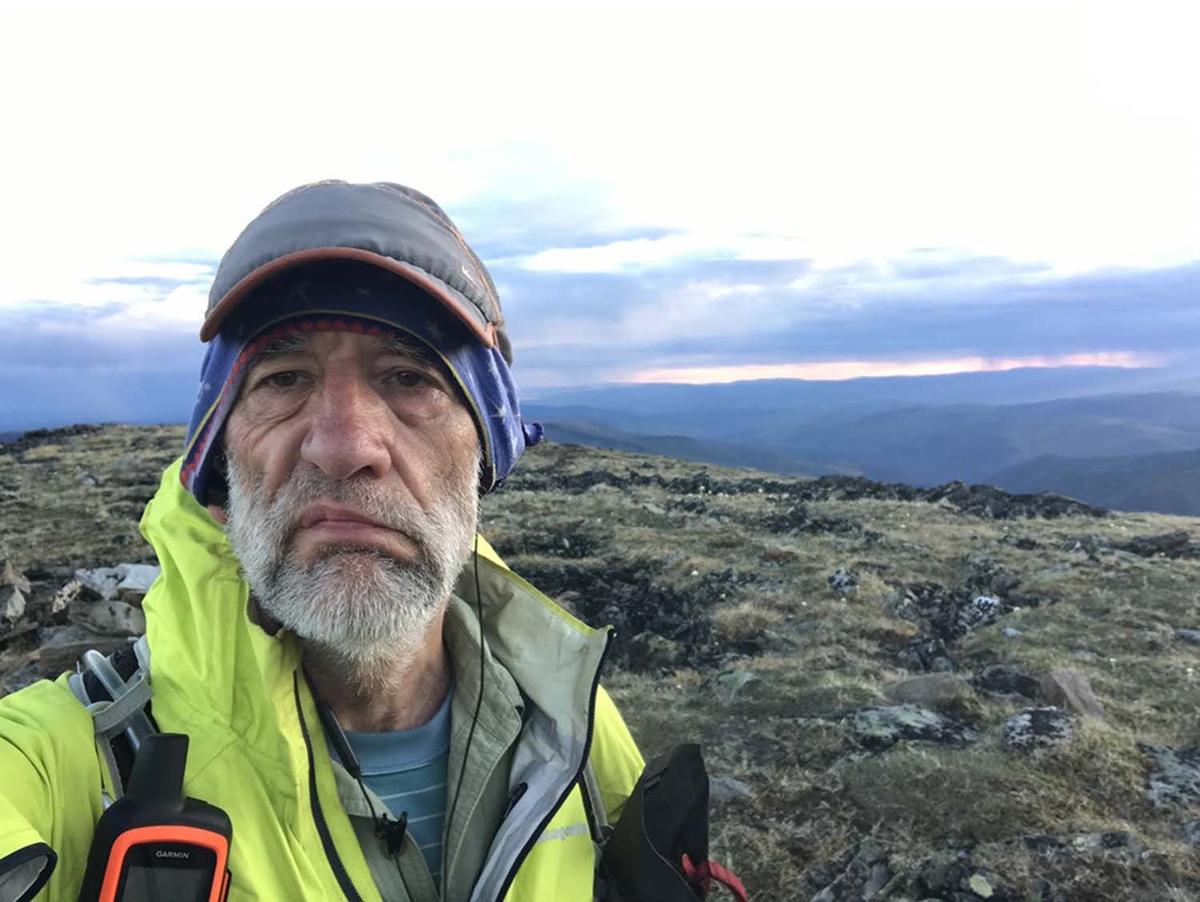 On my second summit of Chena Dome. 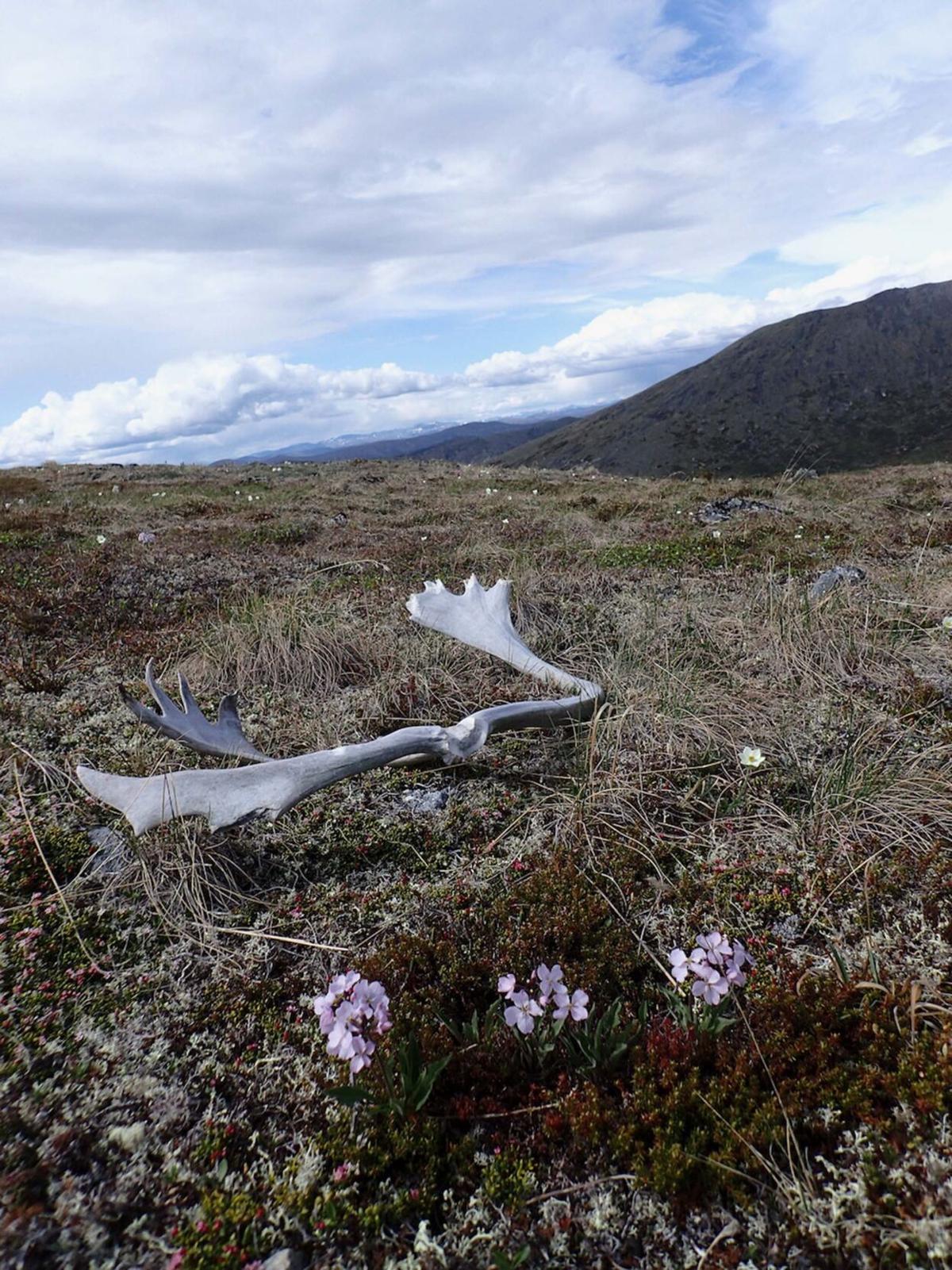 Caribou antlers and flowers on the Far Mountain route. 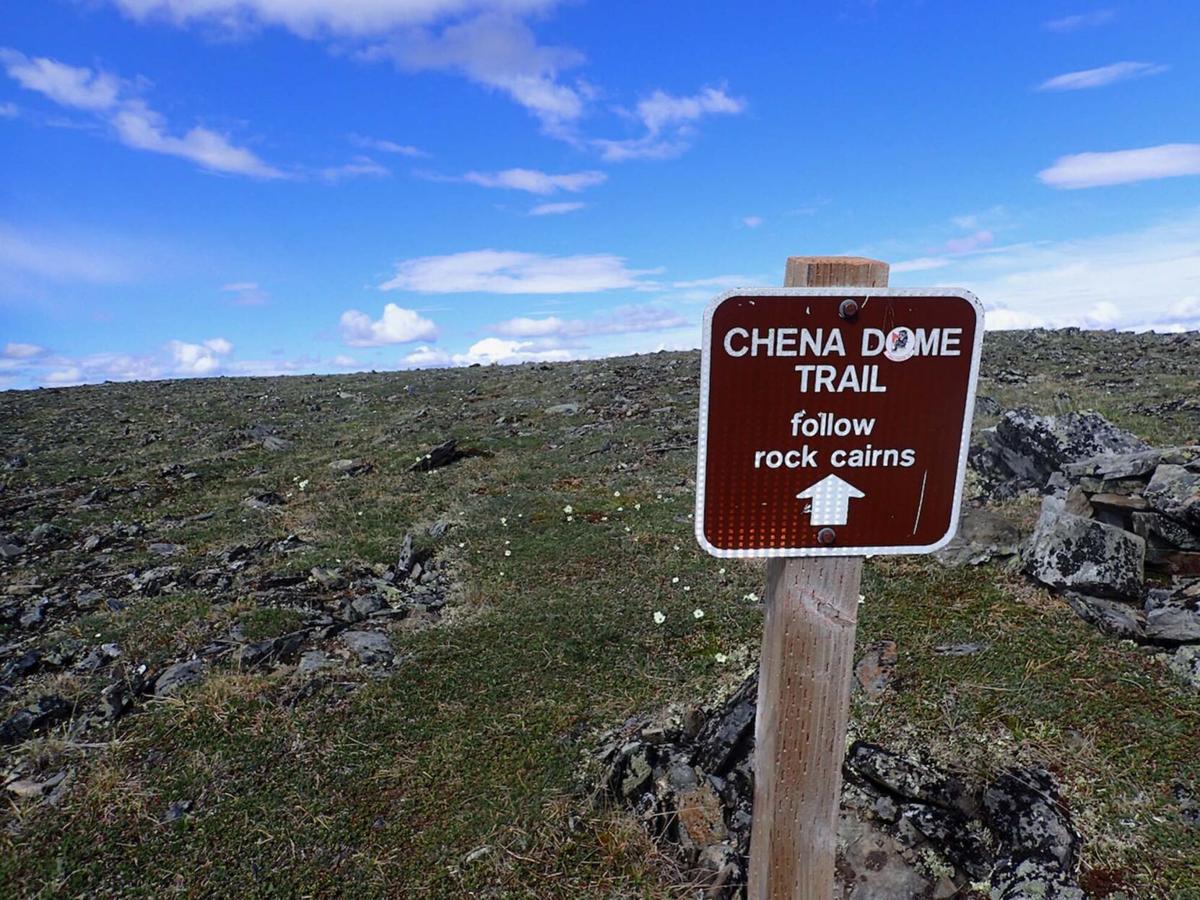 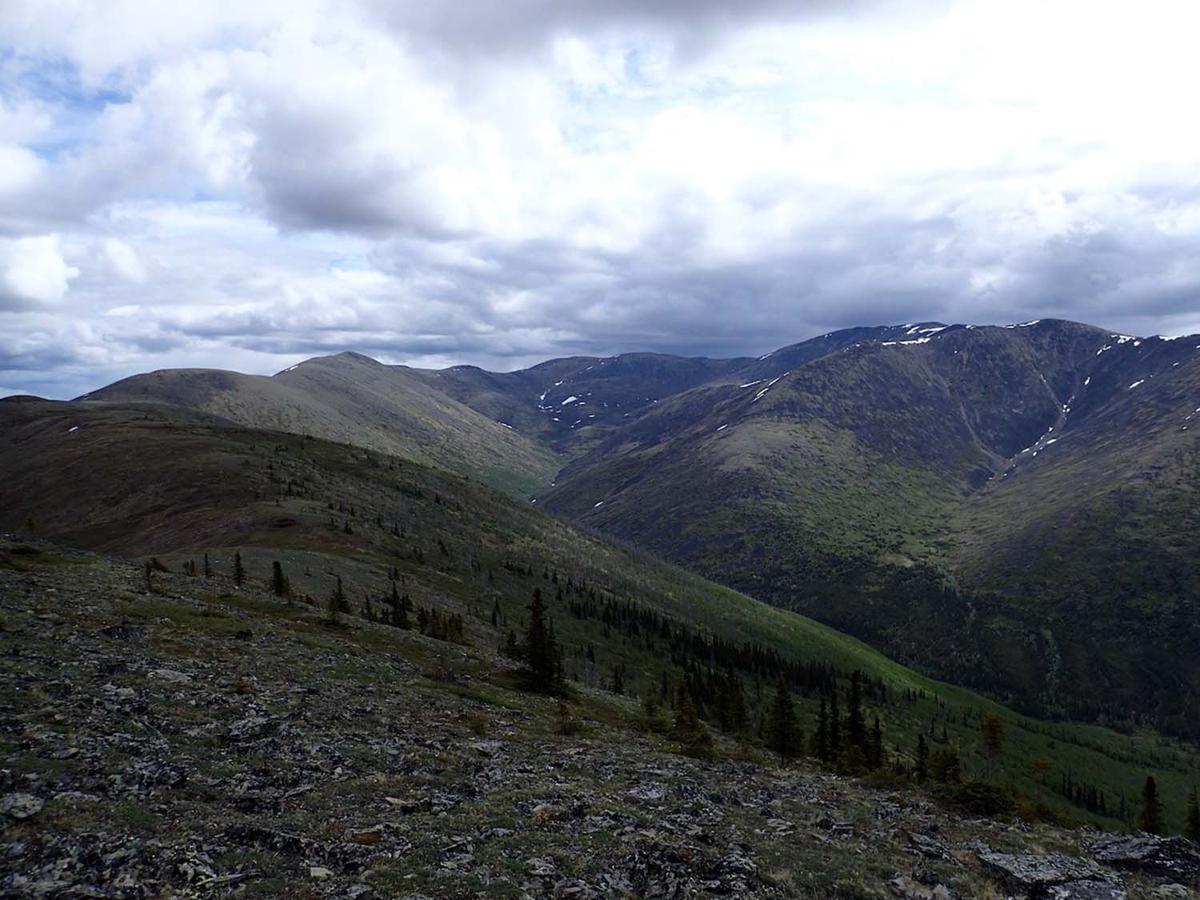 The view ahead of the Far Mountain route. 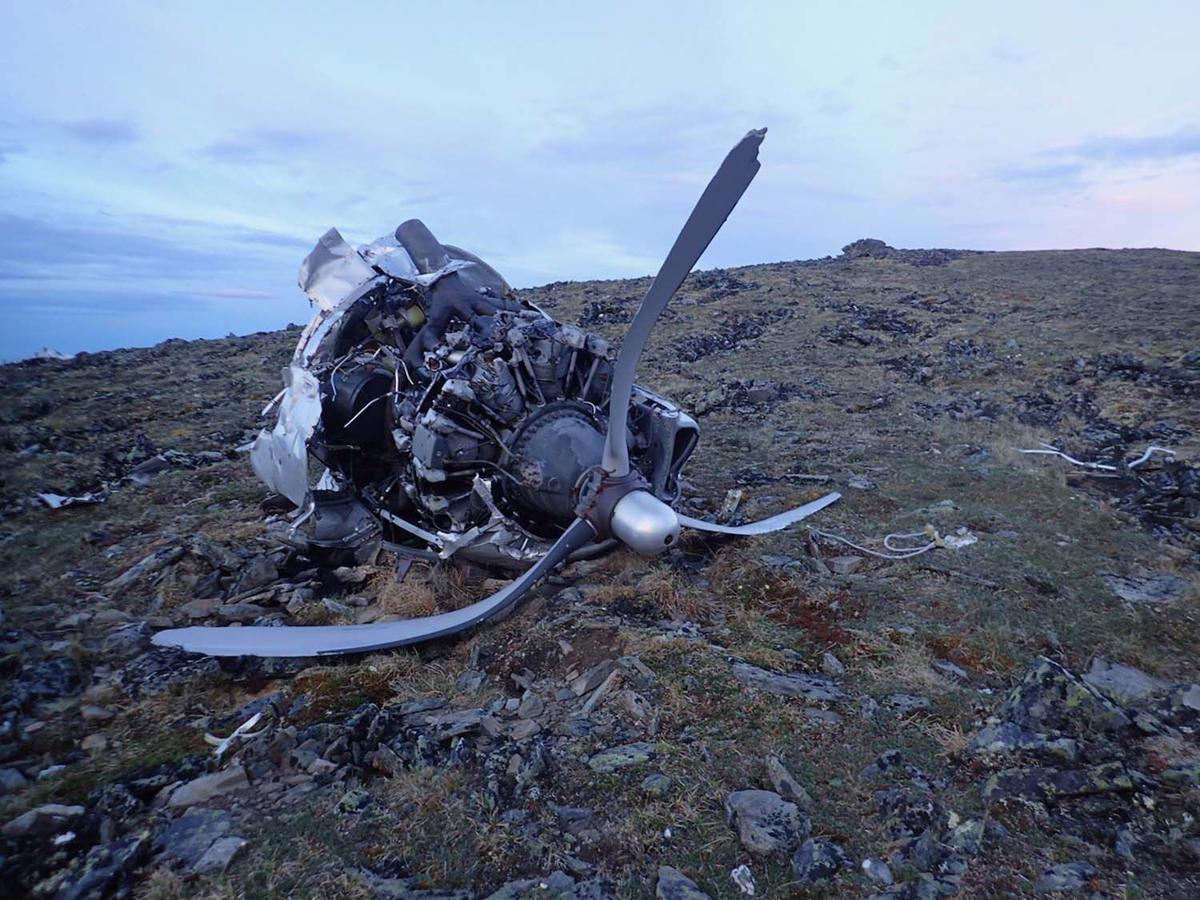 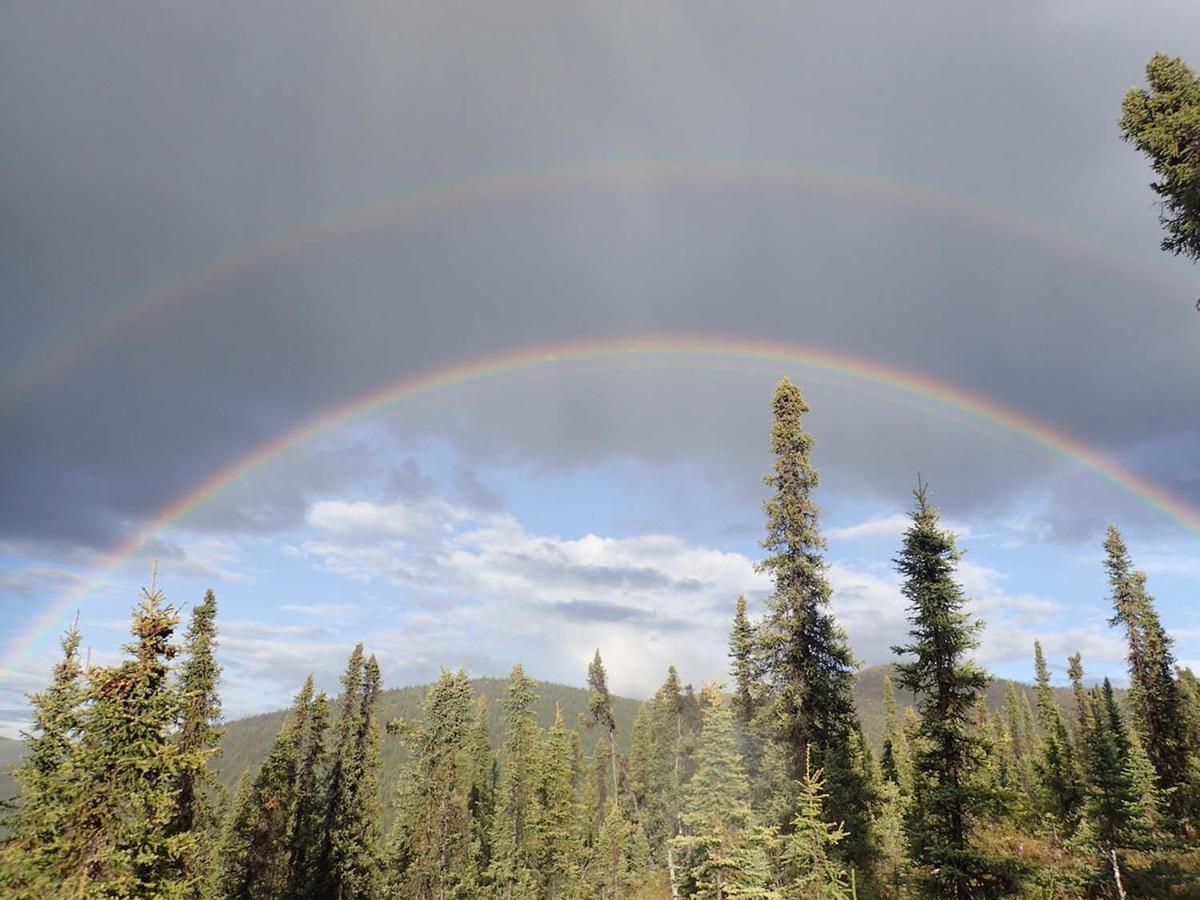 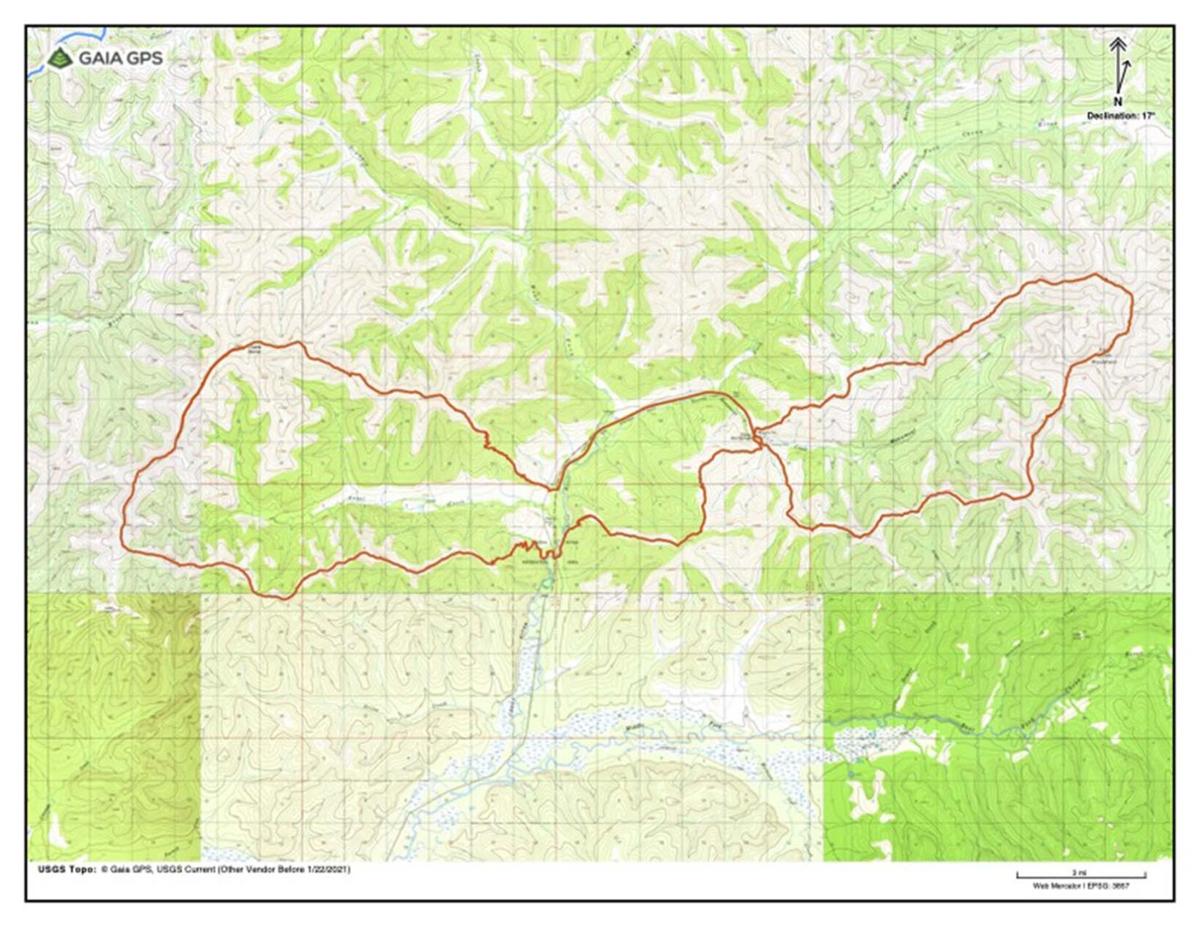 On my second summit of Chena Dome.

Caribou antlers and flowers on the Far Mountain route.

The view ahead of the Far Mountain route.

That was my mantra. I cheerfully repeated it early in my 80-mile hike. I said it with determination as the miles and hours wore on. I spit it out as a curse when I accidentally backtracked 2.5 miles after 36 hours of hiking.

By then another phrase started dominating my thoughts: ‘Stupid optimism!’

I got this ‘really good bad idea’ years ago while participating in local trail-based ultra-endurance events, such as the White Mountains 100, Chena River to Ridge and Drew’s Angel Creek 50. The last two, held mostly in the Chena River State Recreation Area, were probably where this idea started.

While looking at maps — I’m a trail geek — I noticed that a person could make a huge loop of three trails in and adjacent to the rec area with only a bit of road to connect them: Far Mountain, Angel Rocks to Chena Hot Springs (ARCHS) and Chena Dome, with just six miles of Chena Hot Springs Road. It’s a mostly wilderness route with fairly easy logistics due to a couple of resupply/bail-out points.

The idea is elegant. Well, elegant to addled trail geeks. It’s also a tough route. The trails are often rocky and steep. Both Far Mountain and Chena Dome are just alpine routes for much of the way, requiring route-finding skills (though Chena Dome does have helpful cairns). I tossed the idea out to a few people hoping someone would take it on so I could hear about the adventure.

Unfortunately, no one took me up on the idea. So, I forgot about it. At least, I tried to. Like an annoying itch, I couldn’t get rid of it. Even after I had decided to quit ultra-running events, too hard on body, too much training required. But there was no way I was going to run that stupid route.

Then, earlier this year, I found myself casually throwing out the idea of hiking it to friend Ned Rozell, another trails and ultra-endurance geek. I waited for him to laugh at me. He thought for about 1.5 seconds. “Sure,” he said.

Uh. Was I serious? I hadn’t been doing any training. But Ned’s response made that itch even more annoying. But my time was limited. Ned and I had a couple of emails, but our schedules didn’t sync. I had only one three-day weekend available: June 11-13.

Oh my God, I started making plans. Won’t somebody talk me out of this? I was afraid to mention it to some people. I know some crazies who might want to go along, further cementing the idea. Optimism — ‘stupid optimism’ — had me thinking I might be able to pull this off, but it was still a ‘really good bad idea.’ Really good for someone else to do. Bad for me.

I hoped for outside intervention. Surely, my wife, Corrine, would tell me I shouldn’t try since I hadn’t done any training. Nope. “Great!” she said. “Go for it!” (To be fair, my wife had just attempted a 350-mile gravel bike race in Kansas. She’s a little addled, too.) Miserable weather? Nope. The forecast — cool temps and scattered showers — was just about perfect.

Suddenly, I was making a food and gear list and then I was shopping and then I was waking early Friday and then I was at Chena Hot Springs starting up the Far Mountain Trail. My ‘stupid optimism’ kept reminding me of a few things: First, I could bail out at a couple of points, second, I’m just hiking and third, I can rest whenever I get tired.

I’m not a very thorough planner, especially doing solo trips. I blame that on my ‘stupid optimism.’ If things don’t go quite as planned, I’m confident I’ll figure it out. Fortunately, I also have a heightened sense of responsibility. I bring lots of supplies, gear and navigation aids so that I’m prepared if things go wrong.

I had been on all the trails at least twice before. My rough guess was that this hike would be about 65 miles and would take 20-30 hours. The reality? The route is 75 miles and took me 49.5 hours. (To be fair, I did hike an extra 5 miles when I accidentally backtracked, but even without that mistake my estimates were way off.) I traveled slower than I figured I would, and I didn’t account for resting. I blame it on ‘stupid optimism.’

The actual hike was pretty uneventful. I started telling myself that after finishing Far Mountain and ARCHS. I hadn’t gotten lost. No bears or mad mama moose. I got spritzed on a couple of times, but I didn’t even consider donning my rain jacket. The biggest “event” was when, after finishing Far Mountain, I grabbed a microwave burger and burrito, along with a Coke, at Chena Hot Springs Resort while charging my electronics. I had two electronic navigation devices as well as map and compass.

Things were still going smoothly even after starting Chena Dome Trail — after hiking for about 24 hours — but I did get sleepy, so I pulled out my emergency bivvy bag and took an hour nap.

I started struggling when I approached the Drew Harrington Trail Shelter on the Chena Dome Trail. I struggled even more when I realized I had misjudged where the shelter was by a few miles. (‘Stupid optimism.’) When I finally got to the shelter, I rested and napped another 20 minutes. Overall, the hike had been tiring but uneventful. I noted that several times.

Apparently, my sleep-deprived brain thought things had been too uneventful. That same brain got me turned around atop Chena Dome, the high point of the trail. I mistakenly remembered that the trail bypassed the very top of the dome with a short dogleg to the summit. I summited, happy, then backtracked to the last cairn and surveyed everything before me. I looked at where I had been and where I needed to go and started following the cairns. All was good.

After about a half-mile I passed mile marker “11.”

“That’s wrong,” I thought as I passed it. “That should read 10. The trail crews screwed up.”

(I was following the trail backward from the direction normally taken.)

I kept trudging along until I passed the next one marked “12.” I got annoyed.

“Did they mark new mileages from the summit? No, that’s wrong I haven’t gone that far from the summit. Did they just re-use old markers? That’s bad. That’s going to get hikers all screwed up!”

I’ve read about this phenomenon before. People are convinced they are right, so they shape reality to fit their version of the truth. It happens in all sorts of situations, including out on the trail. It’s even happened to me a couple of times before on hikes, but I’ve always been able to correct myself quickly. This time I kept going. Nothing I saw along the way rang any bells of recognition. I’ll blame sleep deprivation.

The next mile marker said “13.” And I noticed I hadn’t seen the old plane wreck, which is at about mile 8.5. I finally turned around and looked back. There was Chena Dome, looking exactly the same as it had a couple of hours before.

I said something I’m not going to repeat here. I said it loudly. Really loudly.

Then things got stranger. I didn’t want to turn back. I wanted to keep going the way I had been. I had momentum. Fortunately, I wasn’t that sleep deprived. I did the math. The trail is 29 miles long. I was at Mile 13. I could continue the way I had originally come for 16 miles or turn around and go 13 miles. And the 13 miles would be much, much easier terrain. (Or so I remembered. Ha! ‘Stupid optimism.’)

The fact that I wouldn’t complete my goal by continuing back the way I had come barely registered. I guess I was so tired I just didn’t care that much. It’s a good thing I didn’t have a bail-out point nearby.

With some effort I turned myself around and headed back toward Chena Dome, recrossing my path for another hour or so. At first, I was angry. So angry that I actually found energy and sped up. Eventually, my sense of humor rose up and I had to laugh at myself.

I summited Chena Dome for the second time and saw that the trail continues across the top and down the other side. I followed the cairns carefully, paying close attention to the trail markers. I was delighted when the next one read “10.”

I passed the old plane wreck, tired but in a good mood. I remembered that everything past that stayed high. No more steep saddles to hike down and then back up. Stupid optimistic memory. That part of the trail has a couple of deep, steep saddles and some other ups and downs.

Eventually, I started fading again and took one more 40-minute bivvy nap. Finally, I got to where the trail headed down off the ridges. The downhill steps were still painful, but I was relieved I would not be dealing with any more saddles. When the trail became less steep, I knew I was almost done. But that part of the trail goes on for much farther than I had remembered. Stupid optimistic memory.

I finally made the trailhead. Just before I got there I glanced down the Winter Trail, which parallels a portion of Chena Hot Springs Road. I had thought earlier about trying to navigate that boggy route to make my route more “trail pure.” Ha! Forget it. Besides I would have had to cross the West Fork of the Chena River. Nope.

I stopped briefly at the trailhead to tend to my feet. Only a few blisters, but oh so sore. Then I headed out for six miles of road walking. There are few things I hate more than walking on pavement. I convinced myself to alternate walking and running every five minutes. You wouldn’t have recognized it as running, but at least I was using some different muscles.

I was tempted to hitch, but only six cars were headed for the resort when I was on the road, and four of those came by when I was within 1.5 miles of the end. No way I was going to quit that close to closing the loop.

I’m glad I did it, though I’m still a bit mystified why I even tried. Maybe I felt a need to test myself. But I never would have attempted it had I known how long it was really going to take me. I guess it’s good to have some ‘stupid optimism’ if you want to undertake a ‘really good bad idea.’

Eric Troyer is a local writer and trails advocate. He publishes the Interior Trails Newsletter, a free monthly newsletter about trails in interior Alaska. To get on his distribution list send him an email at fbxtrail@gmail.com. He and his wife, Corrine Leistikow, also keep a blog of their adventures. See the blog here: https://notquiteoverthehillcorrineanderic.blogspot.com/. A copy of this story first appeared in the blog.