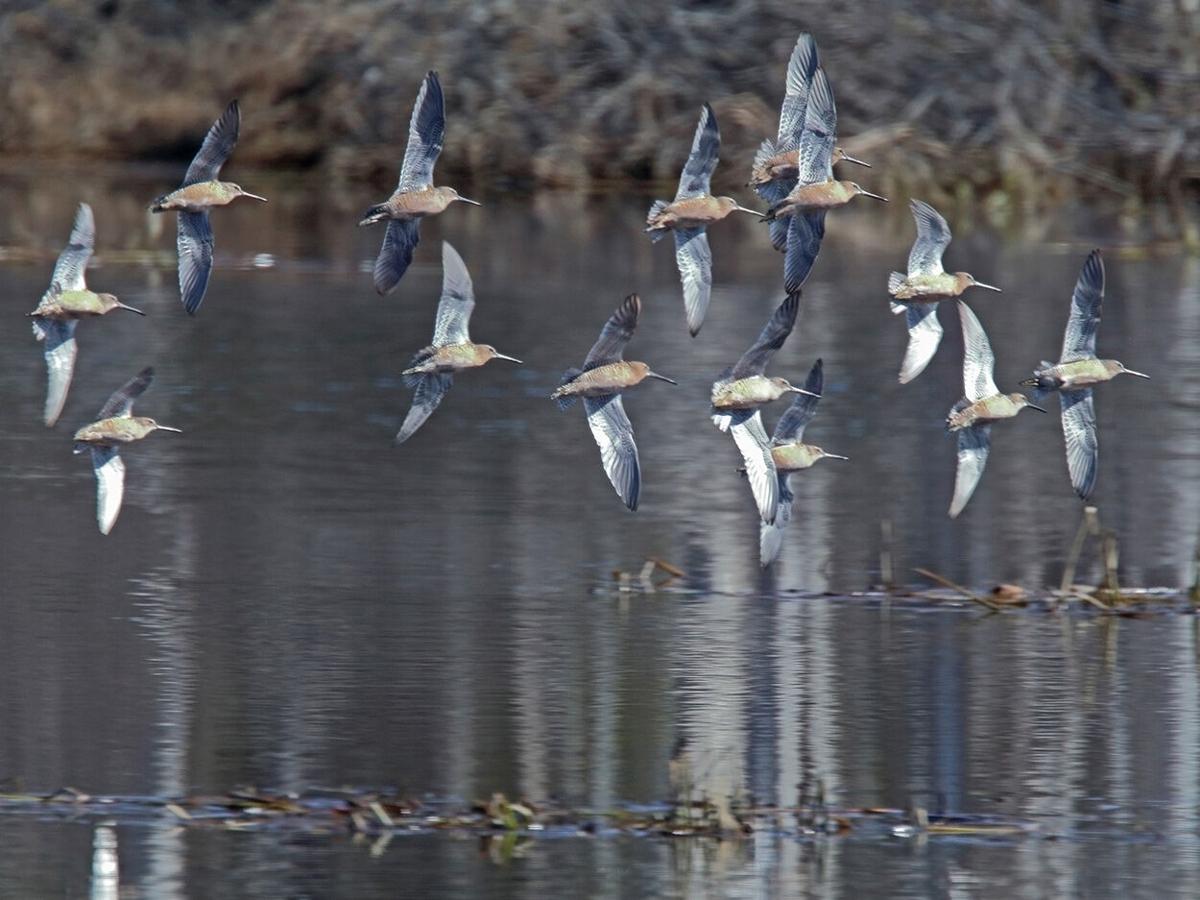 A flock of Long-billed Dowitchers skims the shoreline showing off their very long bill, chunky body and rich color. 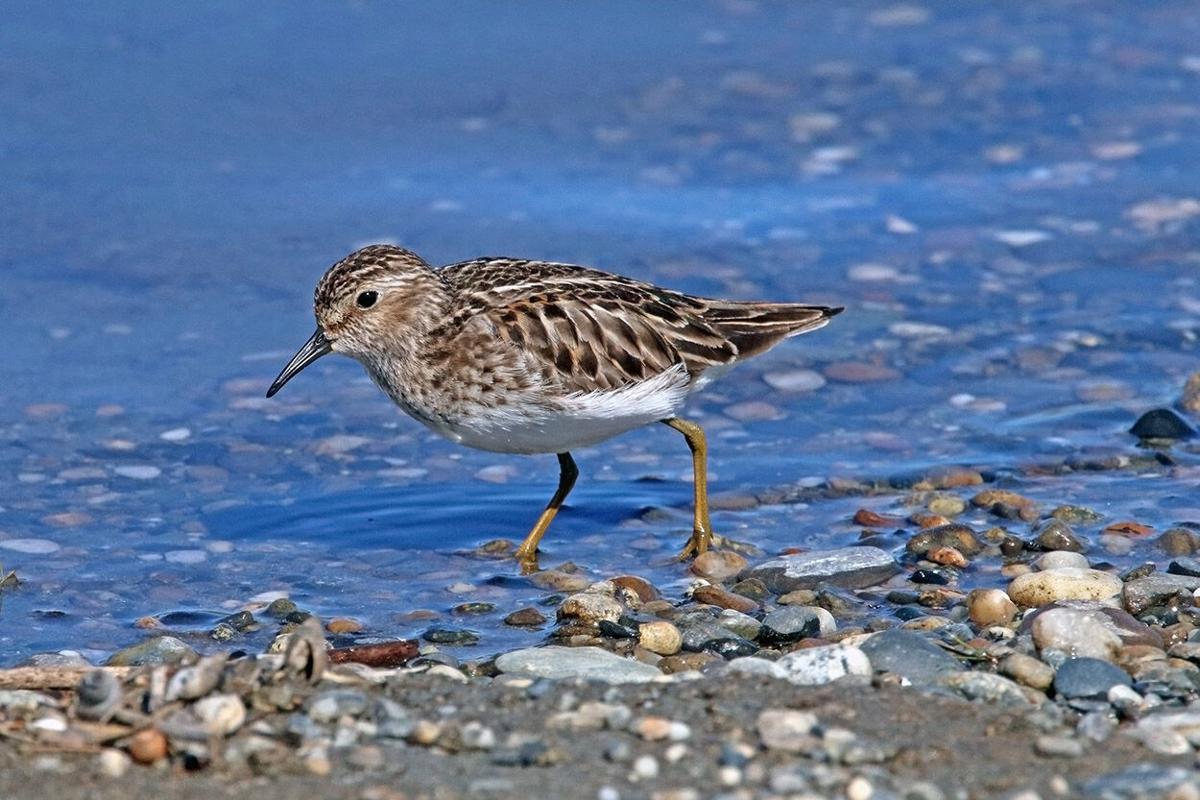 Least Sandpiper is one of the smallest sandpipers affectionately known as peeps. It is about 6 inches long, Look for yellowish legs if the light is good. 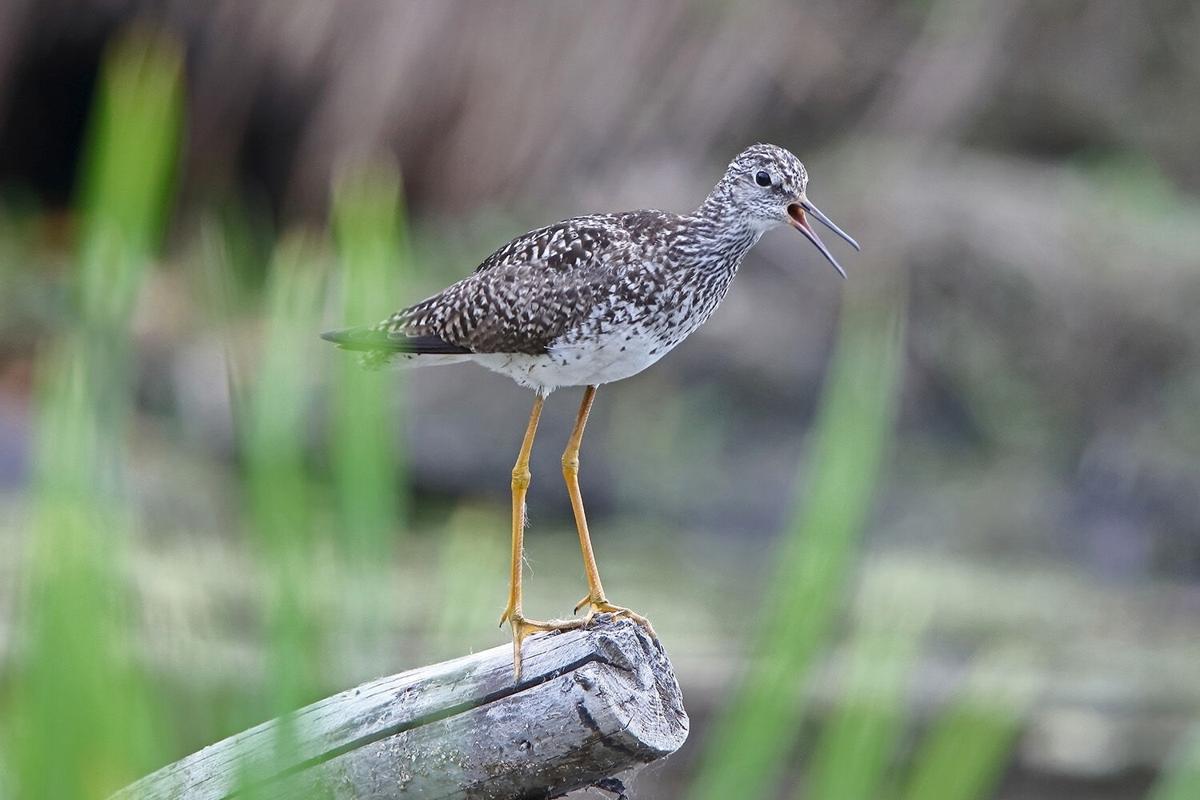 Common and conspicuous, a Lesser Yellowlegs sounds off while displaying its definitive yellow legs 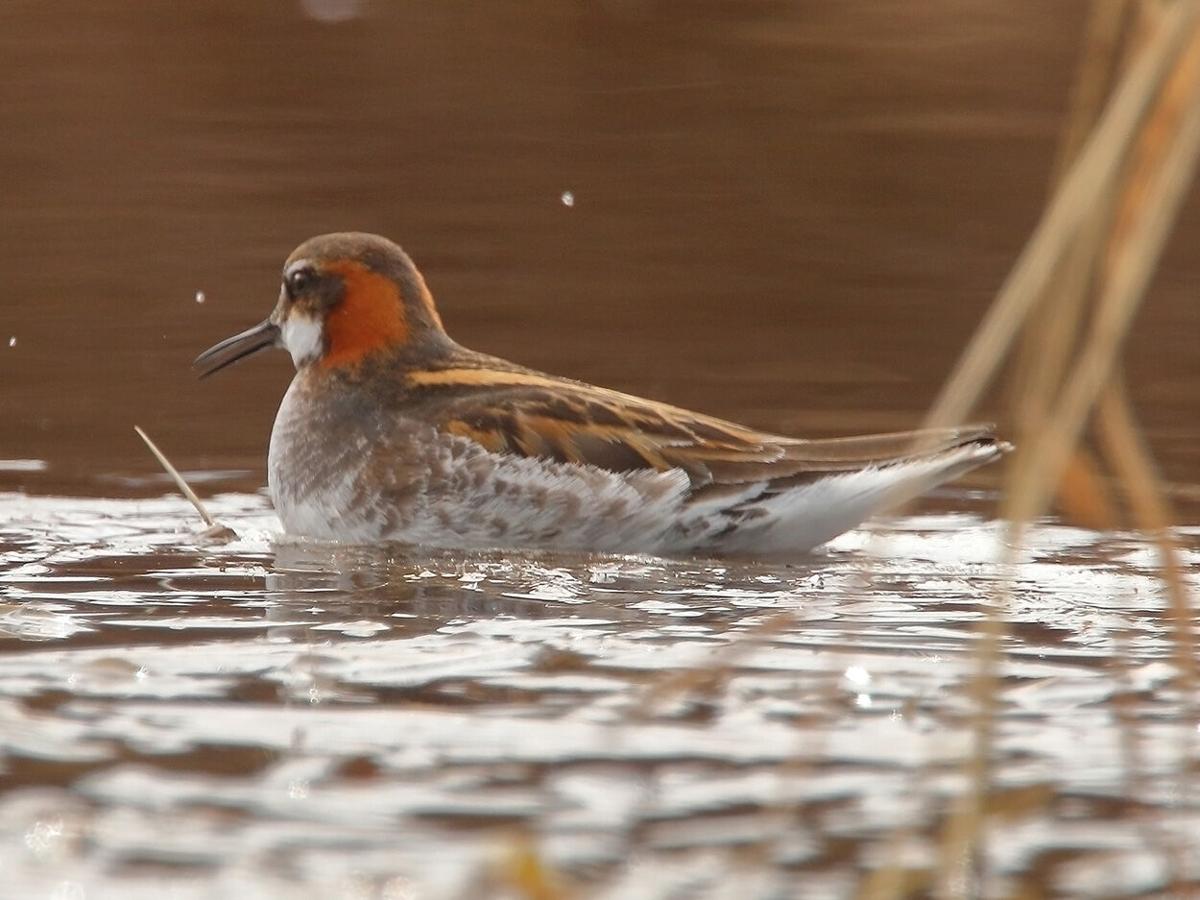 A Red-necked Phalarope spins on the water's surface to stir up its favorite food.

A flock of Long-billed Dowitchers skims the shoreline showing off their very long bill, chunky body and rich color.

Least Sandpiper is one of the smallest sandpipers affectionately known as peeps. It is about 6 inches long, Look for yellowish legs if the light is good.

Common and conspicuous, a Lesser Yellowlegs sounds off while displaying its definitive yellow legs

A Red-necked Phalarope spins on the water's surface to stir up its favorite food.

Shorebirds – sandpipers, plovers, and related species – are a prominent part of the assemblage of Alaska birds. About 30 species are seen with varying degrees of regularity in Fairbanks. As a group, they are renowned for their prodigious long-distance migrations – Bar-tailed Godwits, for example, make a nonstop 11,000-mile trans-Pacific journey in fall from western Alaska to Australasia. Many of the shorebirds arriving in Fairbanks in May are nearing the end of a migration from South America, so forgive them if they seem mostly interested in eating. A few of those individuals of about half a dozen species will remain in the local area to nest, the others stopping only briefly in their hurry to return to breeding areas at higher elevations or further north.

The local breeders provide delightful entertainment in the form of courtship and nesting behaviors. Males of many species undertake elaborate courtship displays in flight. Wilson’s Snipe circle high overhead (often difficult to see), making an owl-like “winnowing” sound actually produced by the vibration of their tail feathers. Our commonest local breeding shorebird, the Lesser Yellowlegs, is a loud and conspicuous resident of muskeg wetlands; males make long undulating flights accompanied by an almost continual “pill-a-wee” call before gliding to a stop with wings out-stretched. The small Semipalmated Plover (solid brown above with a black chest band) makes a strange stiff-winged “bat-flight” to a soundtrack of nonstop yelps.

Shorebirds have a reputation for being somewhat confusing to identify but sorting them out by size, plumage, leg color, and bill shape is a fun challenge for mid-May when they are at their peak of migration in Fairbanks. Starting by learning the most common species is helpful. In the medium-size category, Lesser Yellowlegs are the standard – they are slender and colored pale gray above, white below, and with long bright-yellow legs. Yellowlegs give off a hyperactive vibe, bobbing and weaving as they forage in, or adjacent to, water. The medium-sized Long- billed Dowitcher, in contrast, is stocky and richly colored – rufous below, and patterned in black, rufous, and white above. Dowitchers are most often seen in small migrating flocks, hunched over shallow water with their heads moving up and down as they probe the mud, their long bills visible only when they stand erect. The plumage patterns of shorebirds in flight are often distinctive, so watch carefully when they fly. For instance, the Yellowlegs has a bright white rump and tail, while the Dowitcher has a white diamond shaped patch that extends from the rump up into the middle of the back. Dowitchers most closely resemble a snipe in body and bill form, but lack head stripes and unlike a snipe will never be seen perched on a phone pole or dead tree. In the same size range but totally distinctive in plumage pattern are the closely related American Golden-plover and Black-bellied plovers – they are similar in body form, bill shape (short and blunt) and both have black underparts but as the saying goes, “one is silver and the other is gold,” so there is little likelihood of confusing them.

Moving down in size, the Pectoral Sandpiper is one of the commonest migrant shorebirds in Fairbanks. They are usually seen in flocks, anywhere from five to 50 or more individuals in a group. Pectorals are a warm brown above, with yellow-orange legs, and a streaked buffy chest that contrasts sharply with their white belly. They may be found in a variety of habitats, including pond edges and flooded fields. Similar in basic pattern, but smaller in size are the group of sandpipers known as the “peeps.” The most numerous of these are the Semipalmated (gray-brown above, black legs, light chest streaks) and less numerous Least Sandpiper (smaller, rich brown above, yellowish legs, and a needle-like bill). Fortunately, these similar species may often be found in mixed flocks or close together, so you can compare field marks. Once you become familiar with these two and the Pectoral Sandpiper you might want to challenge yourself to find the rarer peeps, such as Baird’s and White-rumped sandpipers. A telescope is useful for getting good looks, but often if you sit quietly and wait, a foraging flock may approach you unafraid.

The “large” category is represented primarily by the Whimbrel (plain brown plumage but spectacularly long down-curved bill), and the Hudsonian Godwit, which looks a bit like a dowitcher on steroids with an upswept bicolored (pink and black) bill and contrasting white rump and black tail. Neither are common in Fairbanks, but occur annually in small numbers.

Although generally associated with water, shorebirds use a variety of habitats. Red-necked Phalaropes are the most aquatic, almost always seen swimming and spinning as they forage for insects near the water surface. Solitary Sandpipers, Lesser Yellowlegs, and Wilson’s Snipe are found near water in forested areas. Semipalmated Plovers and Spotted Sandpipers are partial to riverine gravel bars or other barren areas. Many species may be found on muddy pond edges or shallow water, but Golden-plovers are often seen on drier fields. Fields are also the place to look for the less common Upland Sandpiper, Whimbrel, and Buff-breasted Sandpiper. Tanana Lakes (and other ponded areas near the river), the Chena River River flood control spillway, University of Alaska agricultural fields, Creamer’s Field, and the Goldstream Peat Ponds are all good places to find shorebirds in spring, but any muddy roadside ditch or flooded area could attract the attention of a migrant flock. Many of these species only show up in town for a few days of the year, so catch them while you can!