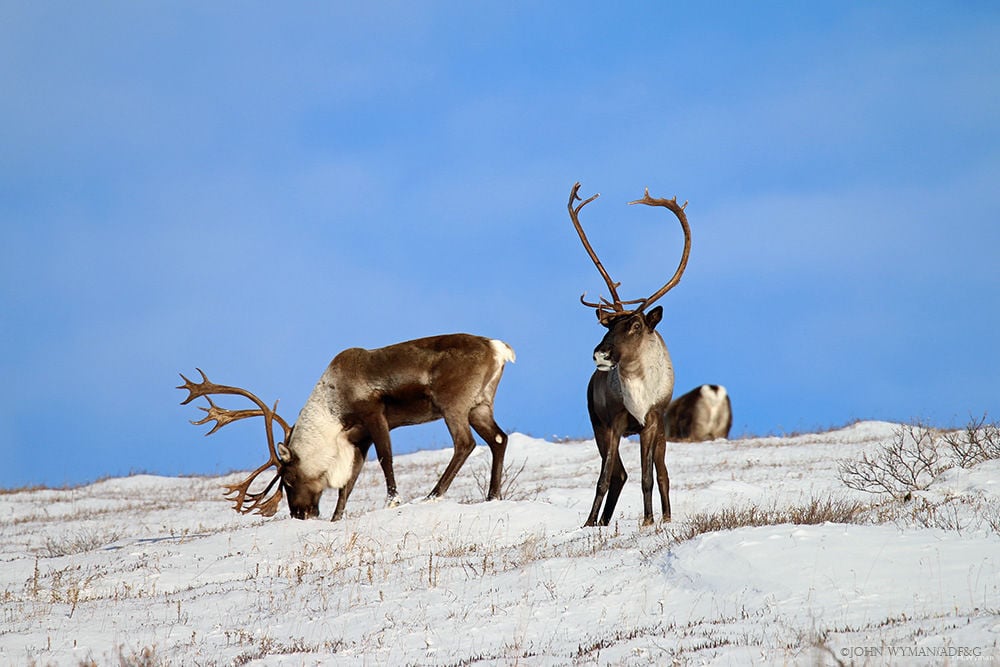 In this 2016 Alaska Department of Fish and Game photo, caribou bulls are seen on a ridge close to the Steese Highway. 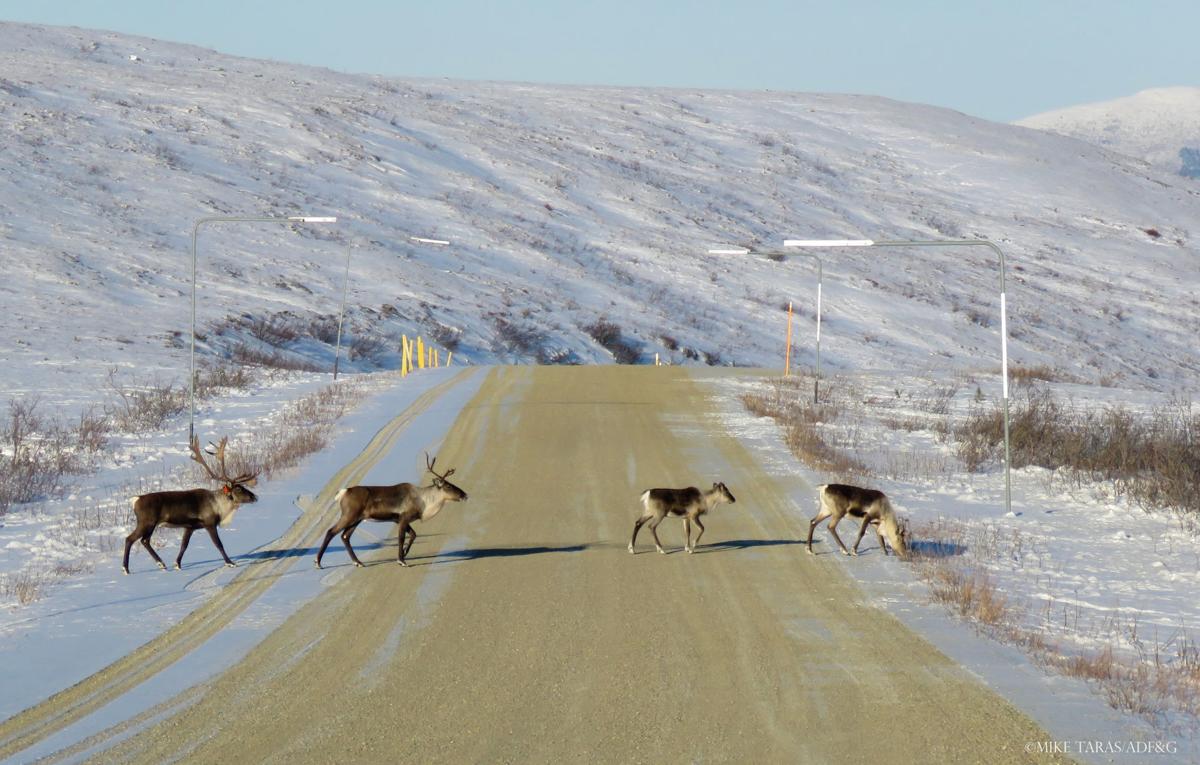 In this 2016 Alaska Department of Fish and Game photo, caribou — including a bull collared for research purposes — cross the Steese Highway

In this 2016 Alaska Department of Fish and Game photo, caribou bulls are seen on a ridge close to the Steese Highway.

In this 2016 Alaska Department of Fish and Game photo, caribou — including a bull collared for research purposes — cross the Steese Highway

FAIRBANKS — The Alaska Department of Fish and Game wants more time to determine whether its largest wolf control project is working.

Since 2005, state employees and private residents aboard airplanes or helicopters have killed more than 650 wolves on state lands east of Fairbanks with the goal of boosting the Fortymile Caribou Herd. It’s part of a state mandate codified in the 1994 Intensive Management Law to increase caribou and moose populations people rely on for food.

Not enough evidence exists to show 14 years of wolf control has helped the Fortymile Herd, said Darren Bruning, who helps manage the Fortymile Herd as regional supervisor for the Alaska Department of Fish and Game’s Divison of Wildlife Conservation.

The department plans to halt wolf control after one more season and see how the caribou respond to a least two years of uncontrolled predation, Bruning said. The temporary halt is part of the state’s wolf control study and is not a concession to wolf control opponents who say the program is ineffective or the Fortymile Herd can’t get much bigger than its current population of about 50,000 animals.

“Wolf control is not being suspended because of a biological trigger or any new research findings,” Bruning said in an email this week. “Suspension of wolf control is just part of our adaptive management process to evaluate management actions and assess if they are contributing to meeting management goals.”

Named for the Fortymile River north of Tok, the herd is an especially important herd for Interior hunters. Its migration route between the Taylor and Steese highways puts it within range of hunters who lack airplanes or riverboats. Its calving grounds are in the Tanana Hills in the upper Fortymile and Tanana river drainages.

Like other caribou herds, the Fortymile has a history of dramatic booms and busts. In the early 1920s, the herd was considered the largest caribou herd in the state, estimated at more than 568,000 animals, although population estimates from that long ago aren’t considered nearly as precise as today’s numbers. The population dropped dramatically between the mid-1960s and 1973, when it was estimated at an all-time low — not much more than one one-hundredth of its 1920s peak. At its nadir, the herd stood at between 5,700 and 8,600 animals.

The good news for caribou hunters is the herd has grown nearly every year for the past 50 years and now exceeds 50,000 animals. Hunters who faced heavy restrictions when the herd struggled have been able to harvest at least 1,000 caribou every year since 2011.

Whether predator control deserves credit for the growth of the Fortymile Herd and other caribou and moose populations is one of the most contentious debates in Alaska wildlife management.

Bruning sees the issue of the Fortymile wolf control as separate from the larger issue of predator control in general. In other parts of Alaska, studies show wolf control projects in Alaska definitely have increased prey populations, he said. But in the case of the Fortymile Herd, biologists need more data. In particular, biologists need more information on the weight of caribou calves and information about how they die, he said.

“The pre-control information is becoming more and more distant in the past,” Bruning said. “By suspending operations, we can do evaluations during a time of no control.”

Public-funded shooting of wolves and bears by airplane to support moose and caribou populations dates back to 1948 in Alaska. Programs have come and gone with various state administrations. Older policies including using poisons and bounty systems to control predator numbers. The current predator control program for the Fortymile Herd began in 2005 and is the largest of four active wolf control programs. The other three are in remote parts of the western Interior and Southwest Alaska.

The Fortymile predator control area is about twice the size of New Jersey and covers most of the herd’s range within Alaska. Notably absent from the area is Yukon-Charley National Preserve, where federal land managers don’t allow wolf control.

The Fortymile wolf control program began with private residents who received special permits to shoot wolves from planes. In 2009, the program was expanded to include state Fish and Game employees. Land-based hunters and trappers with conventional hunting and trapping licenses supplement the work of the aerial gunners, and as a group, often kill more wolves than the flying hunters.

In 2012, the department began attempting “high intensity” wolf removal, which has a goal of killing 75 percent of wolves in an area. The program has never reached this goal. Most years, the combination of hunters, trappers and aerial gunners kill fewer than 50 percent of the wolves in the Fortymile Herd wolf control area. Wolves travel long distances and can quickly recolonize areas after wolf control. The estimated wolf population in fall 2004 was 380 wolves. The estimated wolf population in fall 2015 — the most recent year data was available — was 408 wolves. A recent goal of the wolf control program is to focus wolf removal specifically on the areas where caribou calves live when they are youngest and most vulnerable.

Since high-intensity wolf control began for the Fortymile Herd, the state has spent an average of $385,000 per year on the program. That money previously came from the Alaska Legislature’s general fund. But starting this year, hunters are paying for state wolf and bear control directly through an intensive management surcharge added to the cost of a hunting license. If 2017 hunting license sales are similar to 2016, the surcharge will raise $1.7 million for the state this year alone.

Rick Steiner, one of the most vocal critics of Alaska’s wolf control program in general, has attacked Alaska’s wolf hunts on many fronts over the years, recently describing it as “unscientific, unnecessary, ineffective, costly, unethical, inhumane and controversial” in a petition asking Alaska Gov. Bill Walker to cut back on predator control.

Steiner is a former University of Alaska Fairbanks marine conservation professor who is an environmental consultant in Anchorage. He doubts Alaska’s Department of Fish and Game will abandon wolf control when the current intensive management plan expires because of political pressure from predator control supporters.

Steiner has asked Alaska’s congressional delegation to fund a National Research Council review of Alaska’s predator control similar to one conducted 20 years ago during then-Gov. Tony Knowles’ administration. That report’s findings included several conclusions that remain relevant today. Among other findings, it concluded wolf control is only effective when wolf populations are seriously reduced over a large area for at least four years. It also concluded past wolf control studies didn’t collect enough data.

Steiner said it’s important for a new National Academy of Sciences review to be independent.

“We don’t trust the Department of Fish and Game to do that,” he said in a phone interview this week.

The authors studied the herd’s numbers between 1990 and 2014. They found herd growth rates were fastest in the late 1990s when no wolf control program existed.

The biologists stated wolf control has been useful for other caribou populations but it isn’t responsible for the growth of the Fortymile Herd, possibly because the state hasn’t killed enough wolves and possibly because the Fortymile Herd is larger and less predictable in its migration than herds such as the Delta Herd and Aishihik Herd, where wolf control was effective.

The paper also had a warning that the Fortymile Herd may not have enough food to continue growing beyond its current population. The herd isn’t too large yet, but exhibited “cautionary signals to an eventual decline,” such as declining weights of calves measured in October and early seasonal movement to lower elevations, the authors concluded. The paper recommends continued monitoring of the herd for evidence that caribou are becoming malnourished from overgrazing their territory.

Report co-author Jeff Gross, a state biologist in Tok, said in an interview last week that birth weight data collected since the Wildlife Management paper was written indicate the herd has gotten healthier in the past few years.

Future of the Fortymile Herd

Predator control is a high-profile issue tied to politics as well as biology. Decision-making power over the policy comes from gubernatorial appointees: Alaska’s seven-member Board of Game and the state Fish and Game commissioner.

Then-Gov. Tony Knowles favored nonlethal predator control during his tenure from 1994 to 2002. During that time, biologists sterilized wolves in the Fortymile Herd area instead of killing them. The current lethal wolf control program started during the administration of Frank Murkowski and has continued under the Sarah Palin, Sean Parnell and Walker administrations. The state’s policy occasionally gets national attention and led to statewide tourism boycotts led by animal rights advocates in the early 1990s and 2000s.

The current Fortymile control plan expires in June 2020. After that, Alaska’s Department of Fish and Game will make a recommendation to the Board of Game on whether to continue the program.