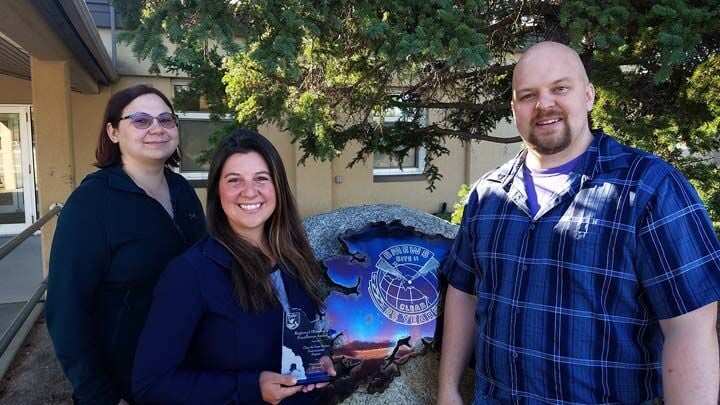 Environmental coordinators Jennifer Chambers and Lydia Maharg and environmental manager Jim Ward show off the award from the U.S Fish and Wildlife Service. 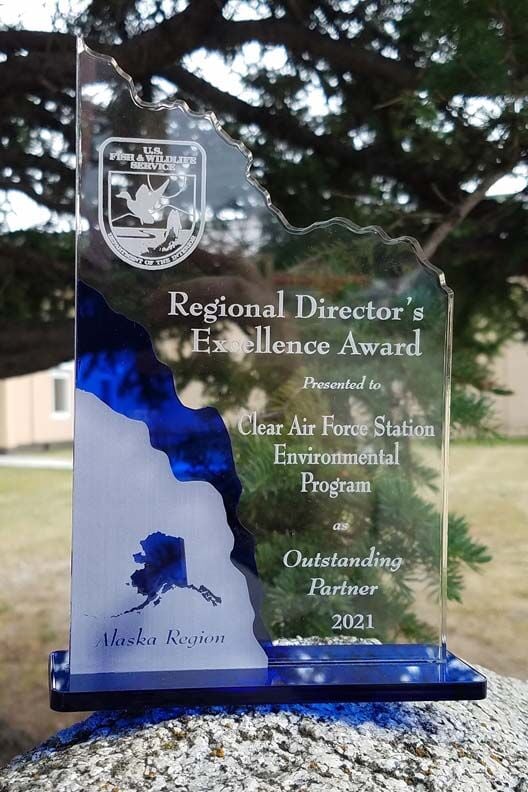 The environmental program at Clear Space Force Station received this outstanding partnership award from the U.S. Fish and Wildlife Service. 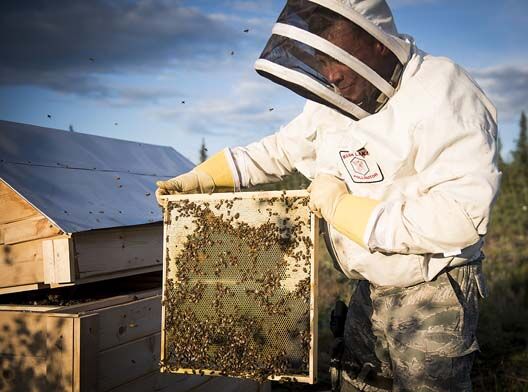 James Campbell of the 213th Space Warning Squadron at Clear works on the active beekeeping program.

Environmental coordinators Jennifer Chambers and Lydia Maharg and environmental manager Jim Ward show off the award from the U.S Fish and Wildlife Service.

The environmental program at Clear Space Force Station received this outstanding partnership award from the U.S. Fish and Wildlife Service.

James Campbell of the 213th Space Warning Squadron at Clear works on the active beekeeping program.

Clear Space Force Station’s mission is to keep America safe. In addition, it actively supports conservation and sustainable management of the station’s land and protects its natural resources.

The U.S Fish and Wildlife Service recently recognized those efforts by bestowing its 2021 Outstanding Partner award on Clear’s Environmental Program.

“I’m thrilled to be a part of this recognition,” said Jim Ward, environmental manager. “Every day I see the entire installation invested in treating our natural resources with respect. An award like this shows that our work is making a difference and it really motivates the entire organization to keep up the good work.”

It might be a surprise to many to learn of ongoing conservation efforts at the military installation, located about 80 miles south of Fairbanks, just off the Parks Highway.

The primary purpose of the recently renamed Clear Space Force Station, is to provide surveillance and to track intercontinental ballistic missiles (ICBMs) and submarine-launched ballistic missiles. It is operated by the 213th Space Warning Squadron.

The station is spread over an area of 11,438 acres, of which about 350 acres are developed.

According to the award nomination, the station “is a fine example of how a smaller, more remote station can successfully participate in contributing to the conservation mission that military installations make across the nation.”

Some of the conservation efforts include:

• Planning for a wash station to minimize invasive species getting on the base. Vehicles entering the base will be washed to remove any hitchhiking invasive seeds. This is believed to be only the second wash facility in the state.

• Finding permanent solutions to prevent the nuisance and health/safety hazards of swallows nesting on buildings.

• Working to eliminate a long-standing practice of a local sportsman’s club distributing grain on base for waterfowl hunting.

These programs not only preserve the habitat and the wildlife that depends upon it, but also benefits people by providing environmentally-based recreational activities.

By creating defensible space in a highly-flammable black spruce forest, Clear’s wildfire management program increased biodiversity with the onset of new growth habitat, which will support hunting and wildlife viewing on base.

“Clear Air Force Station has consistently shown themselves to be a dedicated conservation partner with the service,” the nomination said.

“We value this partnership and look forward to working together into the future.”

Clear also partnered with the Alaska Department of Fish and Game on a grouse population survey and supported a fish stocking program on base between 1981-1994 and 2003 to 2008.

“We have a great team here and continue to work closely with all state, native and federal agencies,” said Linden Beckham, mission support officer.

“When I took over the Environmental Services team at Clear Space Force Station, I was thrilled to see how much support we got from the U.S. Fish and Wildlife Service,” Ward said. “It seemed pretty intuitive to keep working with them and to keep borrowing their expertise whenever possible.

“Likewise, the Air Force and space force are committed to science-based preservation and sustainable management of our natural resources. It’s a real privilege to bring these organizations together to make great things happen.”