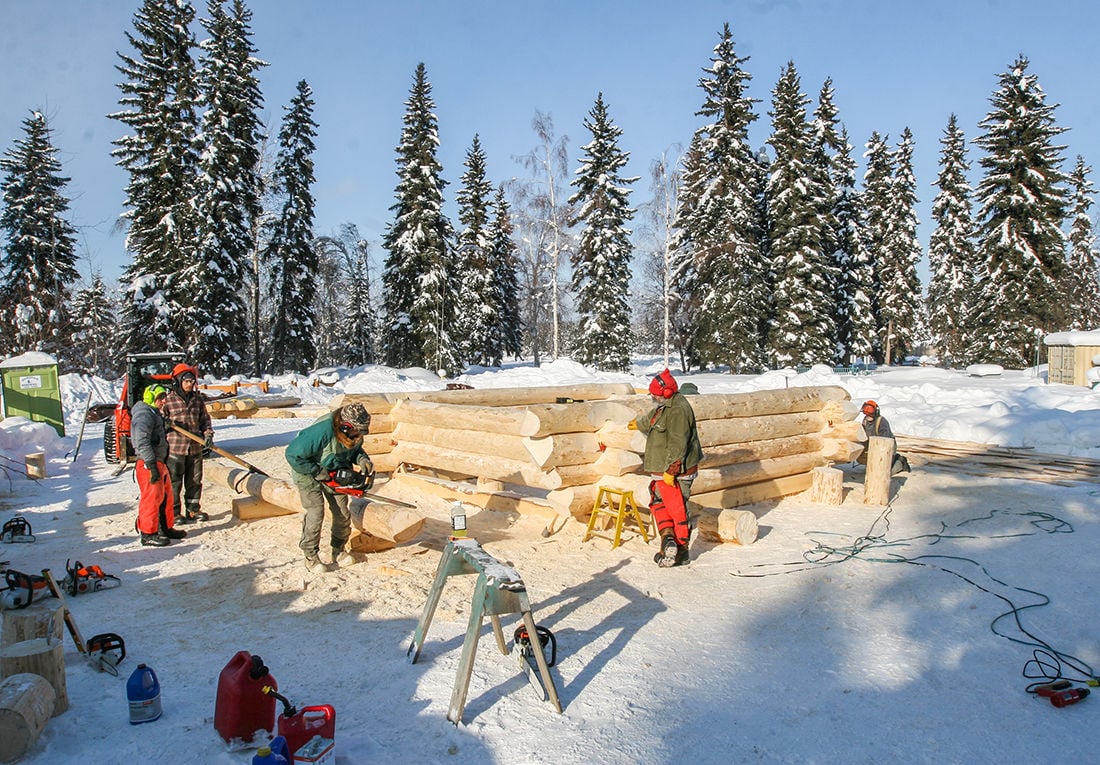 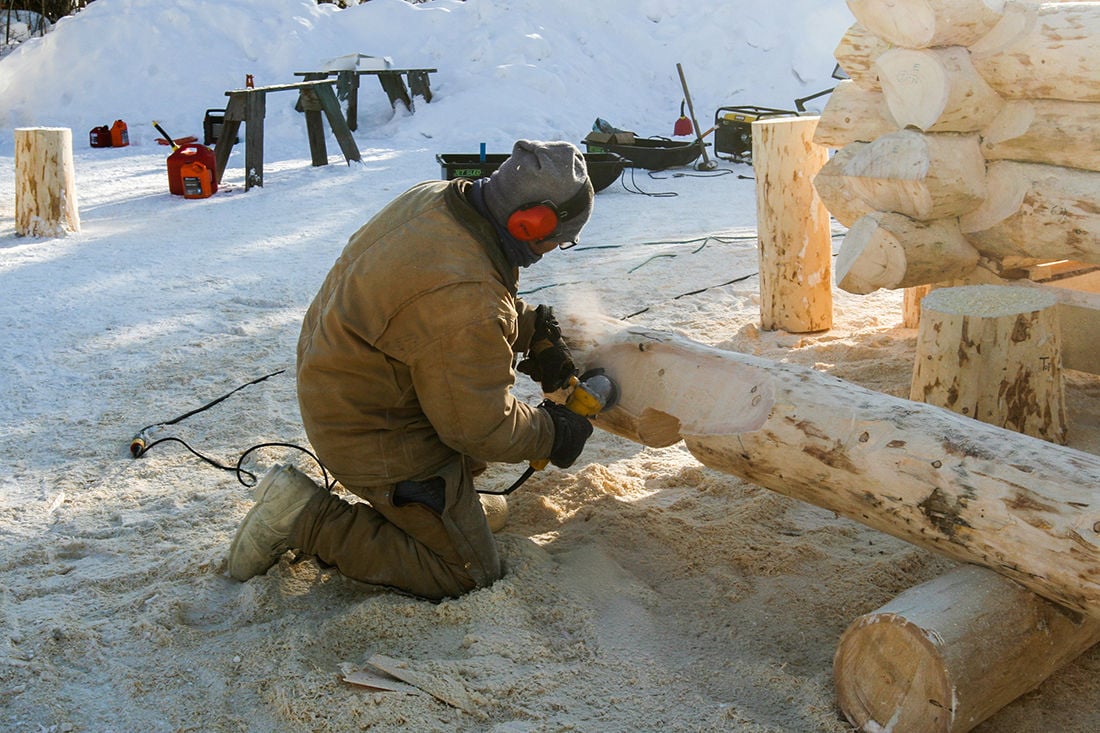 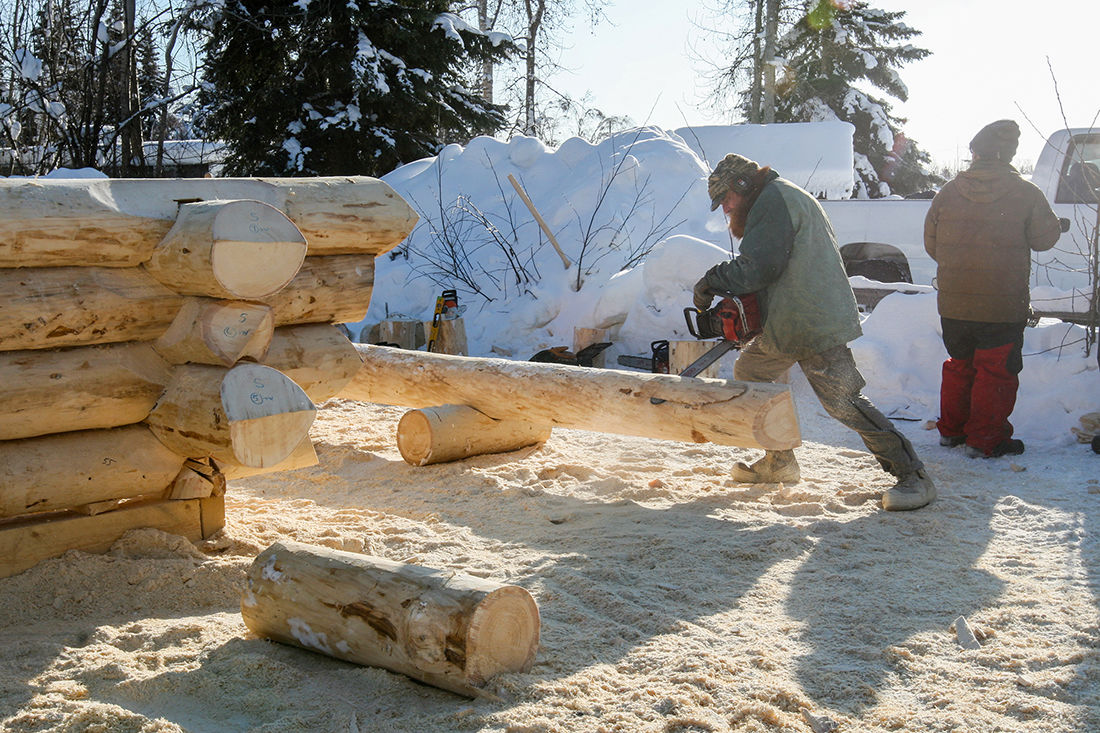 On Wednesday, a class of 10 people were putting the finishing touches on the parts of a cabin that will be erected for public use at Nugget Creek in the coming weeks. The group has spent the past two weeks building the components of the cabin from scratch as part of a 14-day program hosted by the Folk School in partnership with the state Department of Natural Resources’ Northern Region Parks Division.

Sandy Jamieson, a log building preservation specialist and seasoned builder, was one of the instructors on the course. His tutelage over the fortnight appears to have been effective: on Wednesday, he watched as the students took the reins fitting together logs that will support the roof.

“I’ve done several places out in the bush. It’s always better to preassemble things,” said Jamieson, who designed the cabin. “Once everything is assembled and has been fitted together, then we take it apart. In this case, they’re going out on the trail system.”

Jamieson was understating with the word “several”; he’s designed and built over 60 cabins and log homes over his career.

“I made most of my career doing this — combined with satirical artwork about Alaska and Alaska politics. I’ve also guided big game hunters in the spring and fall for 45 years,” he said.

While there are various tools and techniques involved in log cabin construction, you’d be forgiven for thinking that all that’s needed is a chainsaw. Throughout the project, the sound of a chainsaw buzzing was ubiquitous.

“You won’t get very far without a chainsaw,” Jamieson said. “All of this can and has been done with hand tools, over the centuries. It’s just the same basic idea.”

While the whole group are outdoors enthusiasts. He said that each attendee should have the ability to walk away from the class and go build their own log structures. Among them is Jessica Austin, who works as a programmer for Axiom Data Science.

“I would call myself an outdoorsy person,” she said. “Isn’t everyone in Alaska?”

While Austin enjoys outdoors pursuits and has some construction experience, she said the experience of building a log cabin was completely new to her.

“I’ve learned a ton about how to run a chainsaw and do really precise cuts — you know, not just felling a tree where it doesn’t really matter where you put your chainsaw,” Austin said. “This technique, all of it depends on being precise in some places and in other places it doesn’t matter.”

A log structure, she explained, presents a different challenge compared to building with processed wood.

“When you’re building with lumber, everything is dry, everything is the dimension it’s going to be at the end of the day, so you just cut it to length and put it in there,” Austin said. “But this is all about: everything’s going to shrink and sort of change shape and settle. So you want it all to settle nicely, so it doesn’t end up with one corner way off. That’s easy in theory, but learning the techniques and getting it down has been really fun.”

Like many of the participants, Austin has a plan for the new skills she’s acquired.

“I plan on building a sauna, this fall,” she said “So it’ll be much smaller, but the same technique. So I’ve been asking the instructors when I have questions. And in my head I have an idea of how I’ll do it for sure. And I would feel confident trying it out.”

The new cabin will be transported out to a hill in the Chena River State Recreation Area overlooking the South Fork of the Chena River near Nugget Creek. It will be erected near the end of the recently renovated Mastodon Creek Trail.

The cabin-building class is now over, but there are plenty of other classes on offer from the Folk School through the rest of the year. Austin, who sits on the board of the Folk School, encouraged people to go to the nonprofit organization’s website for more information.

“If you’ve never heard of the Folk School, check it out,” she said. “This is one of the bigger scale things we’ve done, but we do everything all the way down to learning how to whittle your first spoon.”

The Folk School seeks to enrich lives and build community by passing on skills and knowledge in classes that are hands-on, family-friendly, noncompetitive, affordable and connect people with the places they live. For more information, visit folk.school.