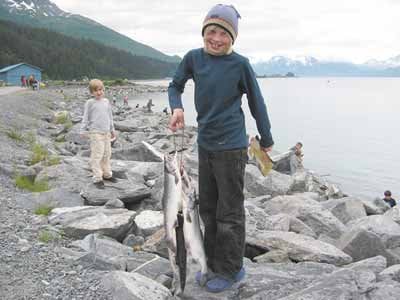 Logan Mowry, 11, holds a stringer of freshly caught pink salmon on the rocks at Allison Point in Valdez as his cousin, 7-year-old Liam Steffen, looks on. / Tim Mowry photo 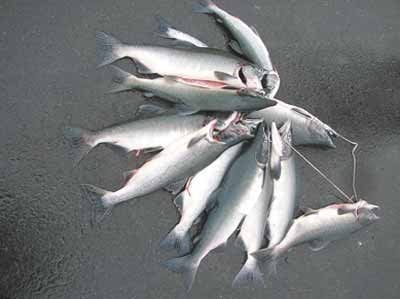 Logan Mowry, 11, holds a stringer of freshly caught pink salmon on the rocks at Allison Point in Valdez as his cousin, 7-year-old Liam Steffen, looks on. / Tim Mowry photo

FAIRBANKS — There was no mirror to confirm the panicked look on my face, but I could feel it.

After rigging five fishing poles and handing them to an assorted mixture of children and adults, I had taken a moment to catch my breath before climbing down the wall of rocks at Allison Point to see how they were doing.

“Has anybody caught one yet?” I asked my wife, Kristan, who was supervising our group of anglers.

“Everybody has caught one!” she exclaimed, as she prepared to help her 15-year-old niece, Chloe, land her second fish in 20 minutes.

I was stunned. It had only been about five minutes since I handed out the last of our five rods.

“How many have you kept?” I asked, worry creeping into my voice.

That’s when reality — and panic — set in.

“Don’t keep any more fish,” I ordered, loud enough for everyone to hear. “We need to start letting them go now.”

We already had five fish. At the rate we were going, we’d have 50 fish in a matter of an hour or two. While my original plan was to go down to Valdez and load up on pink salmon at Allison Point, now I wasn’t so sure.

The prospect of dealing with that many pink salmon suddenly seemed overwhelming. What would I do with them all?

After all, I still have jars of Copper River red salmon sitting on my shelf from last year, and I’m planning to make another trip to Chitina to go dip netting for reds next month.

Not only that, it was only Saturday. We still had a day of fishing left. Judging from the way things were going, we’d be able to catch all the fish we wanted on Sunday.

For years, I have been told Allison Point is place to go pink salmon fishing.

Located about five miles north of Valdez just past the Alyeska Pipeline Terminal, there are so many pinks at Allison Point at this time of year you can literally catch a fish on every cast, according to the stories I’ve heard. Fish are so thick you can walk across the water on their backs. Allison Point is the perfect place to go if you want to get your kids hooked on fishing, I was told.

Since Kristan had booked a halibut charter on Sunday for herself, her mother and her sister, both of whom are visiting from Chicago, I figured a trip to Allison Point would be a great way to kill time — and a few fish — while they were out halibut fishing, especially since there were four children ranging in age from 7 to 15 in our group of nine, none of whom had ever caught a salmon.

We arrived at Allison Point on Saturday afternoon, and the scene was much like it had been described. There were fishermen of all ages lining the rocky shore, forming a gauntlet below the Solomon Gulch Hatchery, the destination of the returning salmon.

The Valdez Fisheries Development Association releases around 230 million pink salmon fry from the hatchery each year and the annual return of adult fish is about 10 million, according to hatchery manager Dave Cobb. With a projected return of 15 million, this year’s run is larger than normal, he said.

Most of the fish — more than 12 million as of Wednesday — are scooped up by commercial seiners in Prince William Sound. The hatchery catches another 1.8 million to cover production costs and provide enough eggs for next year’s crop of fry.

Sport fishermen, meanwhile, harvest around 350,000 to 400,000 pinks per year, the majority of which are caught at Allison Point.

The fish average about 3 1/2 pounds but can be twice that size, evidenced by the winning fish in the Valdez Kids Pink Salmon Derby on Saturday that weighed in at 7.78 pounds.

All you need is a medium- to lightweight fishing rod, some swivels and a few brightly colored Pixee lures — dark green seem to be the lure of choice during the two days we were fishing — and you’re in business. You don’t even have to worry about hooking fish in the mouth, either, since snagging is legal at Allison Point. It’s a good thing, too, because there are so many fish in the water you can’t help but snag them. During the course of two days, we probably snagged more fish than we actually hooked in the mouth.

Indeed, Allison Point was everything it was cracked up to be.

Everyone of in our group caught fish. Logan landed his first Alaska salmon, a big, humped-up male, as did his cousins, Chloe, 15; Abby, 12; and Liam, 7.

Even I caught some fish, which as anyone who reads this column knows is a rare event. It was the first salmon I have caught on a rod and reel in years, having resorted to dip netting at Chitina for the past several years to bring our annual supply of salmon home. It felt good to feel the fight a salmon again, even if it was a pink.

But it was Moise Nagnonhou, a 35-year-old cook from West Africa who came to Alaska with my sister-in-law’s family, who probably enjoyed our two days at Allison Point the most. Coming to Alaska was a dream come true for Nagnonhou and he was determined to catch as many salmon as possible to bring home to Chicago with him.

When I tried to tell him we shouldn’t keep any fish with any kind of hump on their back because it was a sign they were getting ready to spawn and the meat wouldn’t be as good, he would have nothing of it. When I I released a fish that I thought was a little past its prime, Nagnonhou scolded me.

“Why you do this to me?” he said. “This is the only time I come to Alaska; I need as many Alaska salmon as I can get.”

He came to the right place. The bag limit for pinks at Allison Point is six fish a day.

Over the course of two days, we kept 23 fish, 12 of which Nagnonhou caught. After cooking three fish in camp, Nagnonhou came home with 20 fish to take back to Chicago.

As he lugged a full stringer of pinks up the rocks in the rain on Sunday, the gleaming white smile that spread across his face said it all.

“This is the best day of my life,” he said in his African accent. “I have Alaska salmon.”

There is much more to Allison Point than just fishing, though.

Standing on the rocky shore, you look out at snow-covered mountains and lush, green hillsides with waterfalls pouring out of them.

A half-dozen sea otters frolicked in the water in front of us, rolling on their backs and diving beneath the water. At one point on Sunday, an otter popped up and stared at us from about 10 feet away.

The distinctive whistling of bald eagles and constant screeching of seagulls filled the air, as did the birds themselves. There were so many bald eagles taking off and landing that I felt like I was at LaGuardia Airport in New York City.

Just watching other people, especially kids, catching fish and wrestling them onto the slippery rocks is an entertaining way to spend the day.

To be sure, fishing for pink salmon at Allison Point is a total Alaska experience, even if you don’t keep any of the fish you catch.