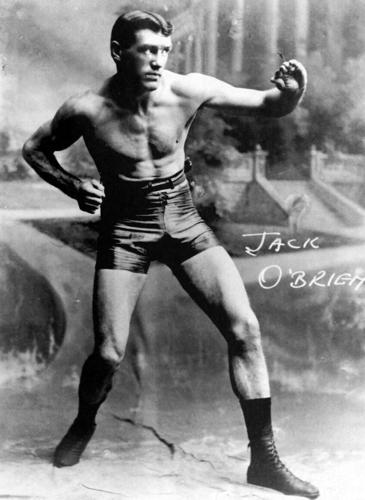 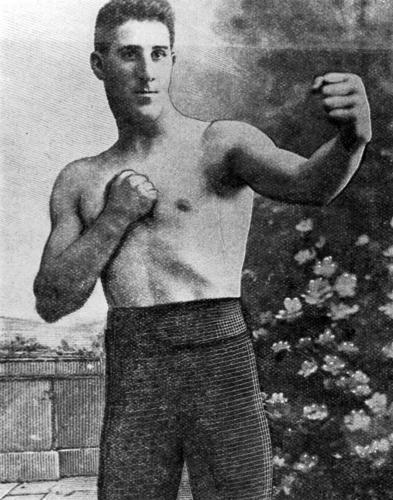 1905 was a big year in Fairbanks and prizefighting was a popular entertainment in a land of men with nothing to do and money to burn on entertainment. Today we have two letters written by two world famous boxers who came North to fight and cash in. These letters give two very different and interesting points of view with vivid descriptions of prizefighting and their thoughts on the 2-year-old city of Fairbanks as it was in the late summer of 1905.

He Knocks and Gets Knocked

Nick Burley does not like Fairbanks. In the Dawson News is printed a letter from him in which he knocks this place as hard as a man of his caliber knows how to knock.

Burley left here owing everyone in town. He tore up his wife’s clothes, and, it is claimed, robbed her of some of her jewels and then skipped out, beating all the men who had trusted him. The chief of police tried to locate him, but he left under an assumed name and sneaked away so quietly that he was beyond reach when heard from.

The following is from the Dawson World:

“In a letter to his friend, Michael Popich, of Dawson, Nick Burley writes from Fairbanks under date of July 23, explaining how he happened to be beaten by Bates in the first round. He writes:

“I was going to write you as soon as I got here, but as this place is a dead one, I did not know what to do. I am writing this letter in bed.

“I fought Billy Bates on July 3. I hit him with my left hand, and when I swung my right, I broke my ankle in two places. I dropped to the floor and could not get up. I have been laid up ever since and will be in bed for ten days yet. People here wanted to bet five to one on me, but no one would bet on Bates.

My God, keep your friends away from here. I am going to Nome as soon as my leg gets well enough to travel. Bates is going to Seattle next week, so they say, to challenge Jim Jeffries.”

HE LIKES THE NORTH

Jack Eilbeck has received the following letters from Jack O’Brien:

Dear Jack: Well, my boy, Bates surprised me and gave me a good contest. I held him cheap, just as Burley did in their last bout, and came near paying the penalty. I am the winner, however, so if he gives me another chance, I will try him out properly. He is a big strong chap and in time may develop into a good man in his class. I will box him any old rules if he will agree to another contest, so you may hear of our next contest over the wires ere you receive this.

I am enjoying the climate here with good health, and altogether my trip to the Yukon territory and Alaska has been one of the most pleasant imaginable. Thanks to your efforts combined with others in making it such.

Expenses are running hiigh and I think a very short time will suffice in this camp. Bates and I had a good house considering the amount of prosperity that is going on in the camp. We divided $1,600 at 60 and 40 per cent. Bates has backing for $1,000 and I may accept the proposition and wager the above amount with his backer. Labor Day may find us battling for supremacy in our scientific manner. Bates is much improved and will not surprise me in retaining the Alaska championship for a long time.

He may try for honors and make good on the Outside.

A letter written by O’Brien at an earlier date says:

Dear Jack: Well, here I am in the great new camp, and although it does not impress one favorably at first glance, it grows on one, and the people in trying their utmost to make you feel comfortable cannot do otherwise than fill on with longings to remain in their midst.

I arrived here Friday, the 18th, consuming the full week in my travels from Dawson.

I am matched with Billy Bates ten rounds Monday, August 28. Bates weighs 200 pounds, and I decided that a week of training was not sufficient for twenty rounds, hence the ten rounds. He is a fine specimen of a man and if he can use the padded mitts at all he should develop and become the champion of his class.

The weather has been enjoyable since my arrival and if the roads keep as they now are, I will have a good week of training in the great North country. The country is certainly improving, and although all the merchants are complaining they all are doing a fair business. I am now seated in the Riverside hotel, which has fully fifty rooms. It is just being finished and surely that is a good sign for a town that is but two years old. Many homes are being built that surprises one on seeing them, as they are truly magnificent for this country. I was on hand last Saturday evening to see the pack train arrive from the creeks. There were about then mules heavily laden with the colors that the country yields. It was divided twixt the three banks, and it is then prepared as quickly as possible for the outgoing boats. The boats seem to arrive slowly, and no mail has arrived for me as yet.

I am thinking of leaving here about September 2nd and will stop at Nome. Then to Seattle and will visit the fair at Portland. Then to Los Angeles to meet Burns or Sullivan in October. Will mostly be in ‘Frisco during the winter and Palace hotel will find me. I shall be happy to have all my friends whom I had the pleasure of meeting in Dawson call on me whilst in ‘Frisco, particularly yourself.

Have met many folks who were formerly Dawsonites, and they all declare that there never will be another camp like Dawson of 1898, and I have heard it so many times that I can almost vouch for it myself, not to say anything of the good treatment I was given in 1905.

Fairbanks supports but one paper, but it is using me royally; and I wish to thank the boys interested in both papers in Dawson for the many nice accounts and bits of space devoted to my profession whilst I was in their midst.

There was a free-for-all fight at Fairbanks, Alaska, the other day when Referee Tozier announced “Philadelphia” Jack O’Brien a winner over Billy Bates of Fairbanks. Bates apparently had the best of the bout for the first seven rounds. Several times he sent O’Brien to the mat for the count during that period. Once in the second round after going down twice, the sounding of the gong was all that saved O’Brien from a beating right there.

Again, in the sixth Bates sent a stiff one to the heart and O’Brien, gasping, toppled over for the count once more. O’Brien, however, rallied during the next three rounds and had the best of the mill from the seventh to the end. The crowd thought the local man ought to have been given the decision, and when Bates started for Tozier, after the decision was announced, all joined in, and only by hard work and much clubbing could the police stop the row.

Note: Burley and O’Brien left Fairbanks and never returned, however, they both went on to later fight in some big matchups on the West Coast. Referee LeRoy Tozier was an early day lawyer and founder of Men’s Igloo No. 4 here in Fairbanks.

This bare-knuckled History Nugget has been proudly brought to you by the Fairbanks Igloos of the Pioneers of Alaska. Contact Joan Skilbred at skilbred@gci.net.