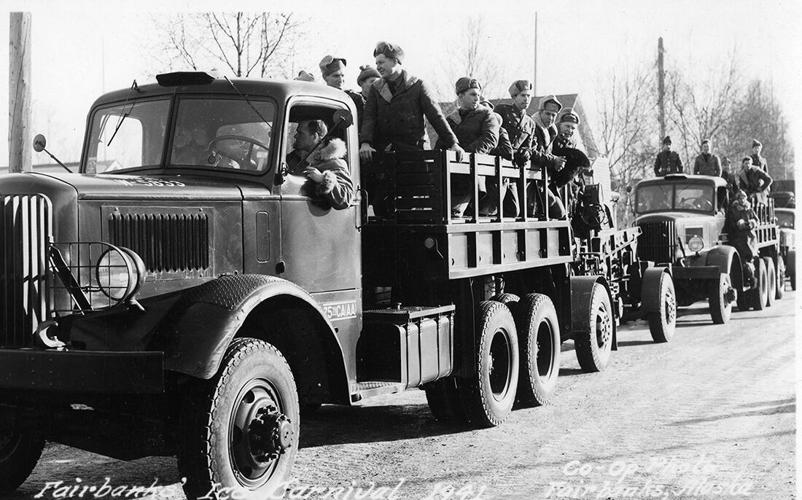 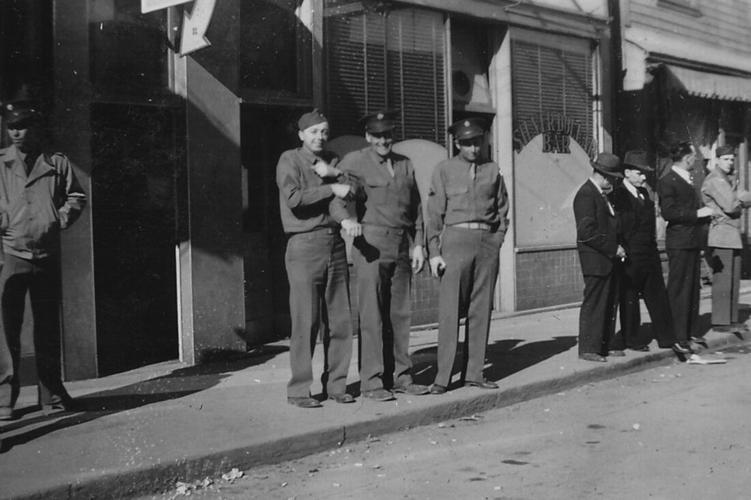 The headline from the Aug. 1, 1951, edition of the Fairbanks Daily News Miner.

The headline from the Aug. 1, 1951, edition of the Fairbanks Daily News Miner.

In the 1950s when Eielson Air Force Base was built, it was hugely beneficial to the Fairbanks economy. During those early days of the base, personnel were paid in cash, which had to be brought down the Richardson Highway from the First National Bank in Fairbanks. As you can imagine this was quite a security spectacle.

Heavy Guard Over Cash Is Reported

A huge payroll for Eielson Air Force Base, believed to amount to hundreds of thousands of dollars, was transported to the base under heavy guard this week after reports were heard that an attempt might be made to hold up the guard and steal the money, the News-Miner learned today.

Military officials did not reveal how large the payroll shipment of cash amounted to, but it is known that the total base payroll amounts to a million and a half dollars monthly.

When military guards and vehicles arrived at the Bank of Fairbanks to pick up the cash, elaborate plans were made to block any attempt to seize the money.

The huge sum of money was placed in a truck, under very heavy Army guard and at the city limits, highway patrol vehicles met the caravan heading back to Eielson Air Force base.

As the truck carrying the cash moved along the highway, radio equipped patrol cars proceeded ahead and behind the convoy. The head car reported by radio whenever an automobile was sighted on the highway or parked beside the road. Soldiers with automatic rifles stood guard on the trucks with the money, and on vehicles around it.

However, the precautions were not needed, as no attempt was made to seize the money on the 26-mile trip to Eielson.

Army and Air Force officials today were mum on the subject and did not state where or when they had been informed of a plot to steal the huge payroll. However, the precautions to protect the money sent to the base Monday were the most elaborate ever known here.

While exact amount of the cash involved in the transfer was not known, estimates place it between $500,000 and a million and a half dollars.

Like to Pick Up a Million? Here’s How NOT to Do It!

When it comes to moving payroll cash from local banks to nearby military bases, the Air Force just doesn’t take chances.

Today, a shipment of cash, that may have totaled more than a million dollars, left the First National Bank under heavy guard. And “heavy” guard is exactly the word for it.

While the military personnel went inside to get the money, the guard force was deployed around the intersection of Cushman and Second.

There was a big half-track truck, mounting three fifty caliber machine guns. Each gun was fully loaded with a belt of gleaming brass cartridges, and they weren’t blanks!

A rifleman stood on each of the four corners of the intersection. In front of the bank door, two more guards stood, each heavily armed.

A small truck and a sedan, loaded with military personnel waited outside the door, and each man in each vehicle was armed to the teeth. The men who went in after the money were packing pistols.

The reason for the precautions was not immediately clear. Perhaps it’s the upsurge in crime in the area, or maybe the Air Force is just cautious.

But there’s no doubt that any man who made a move to snatch one of those satchels of money would have been loaded with so much lead it would have taken the whole Fourth Infantry division to lift him into an ambulance.

Of course, not everyone was happy about the military presence in Fairbanks, so in 1955 the Air Force did a special payout to demonstrate how much Fairbanks was dependent on spending by Air Force personnel.

The Air Force at Ladd Field, last payday, handed out a half-million dollars in brand new ten-dollar bills. These bills were fresh from the mint, and quite distinctive.

Purpose of this special payroll was to demonstrate to local merchants how the military dollar helps this city.

Local business houses found a good many of the new tens in their cash registers.

Of course, most people realize that the military payroll is lifeblood to Fairbanks. But the Air Force experiment with new ten-dollar bills served to convince doubters.

By now you are probably thinking checks are better than cash. This is Fairbanks, so be careful what you wish for:

Two young employees of a local club have been arrested and charged with imprisoning two of their customers.

It seems that these two customers walked in the club and talked to the ladies into cashing checks for them. Later, the girls became suspicious of the checks, so they lured the two men into a back room, then locked the door. Their plan appeared to be to keep the men locked up until the bank opened the following day, and the checks could be investigated. Unfortunately, one man smashed a window, escaped, and summoned police.

At any rate, those tow gals certainly take their check cashing seriously. If they lock a man up overnight on the suspicion that his check was not good, what would they do if one bounced? Probably shoot the offender on sight.

We certainly hope no other local firms adopt these new business tactics. Every time a check bounced, someone would be found floating in the river, or hanging from a long rope. That’s too hard on the customers.

Note: It is amazing to think about what it would be like to see those armed payroll transport convoys performing their duties once a month in downtown Fairbanks. There are probably some folks around town that remember seeing and or cursing at them. This bulletproof History Nugget has been proudly brought to you by the Fairbanks Igloos of the Pioneers of Alaska, who would like to remind you that more History Nuggets can be seen on our website pioneersofalaskafairbanks.org.