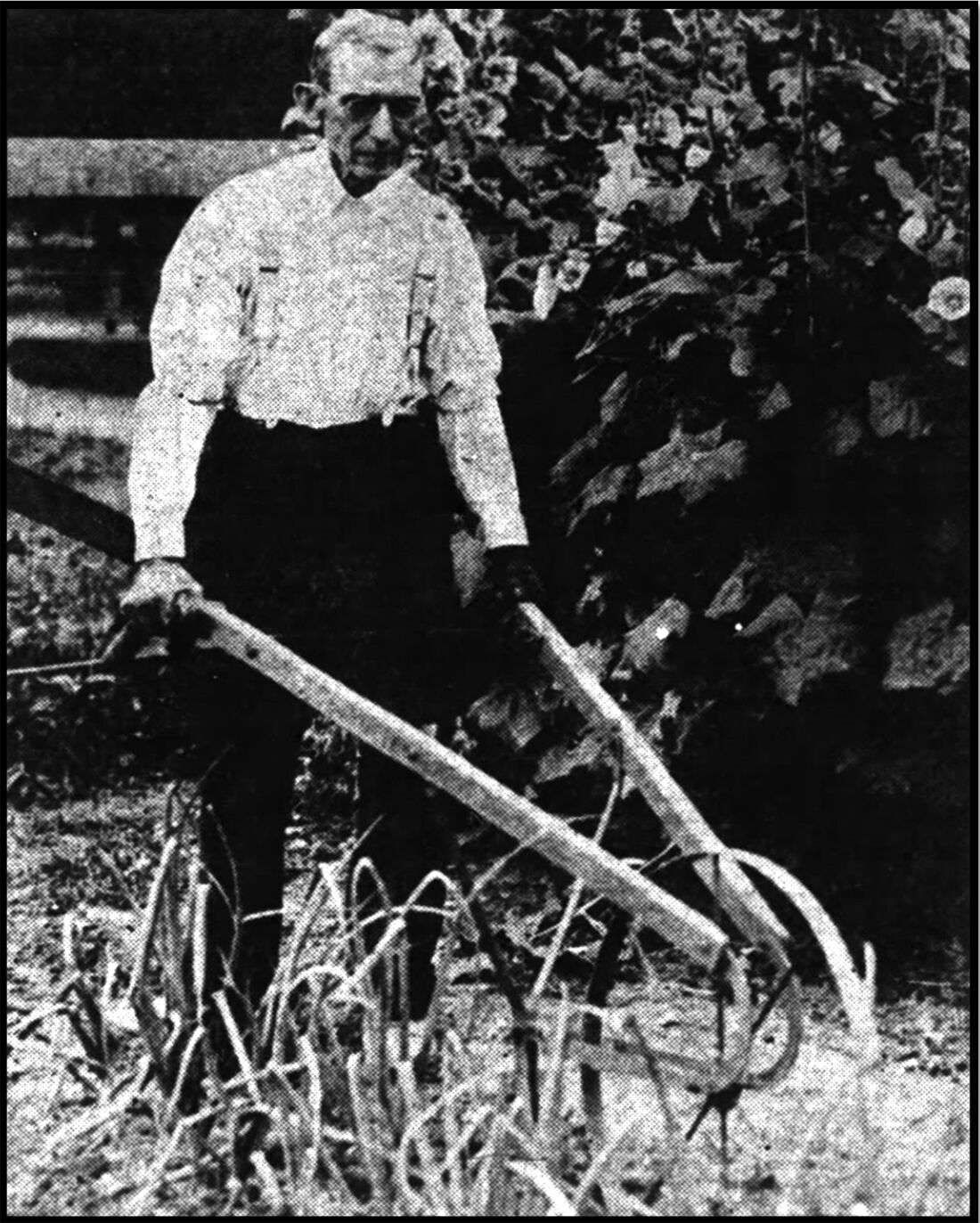 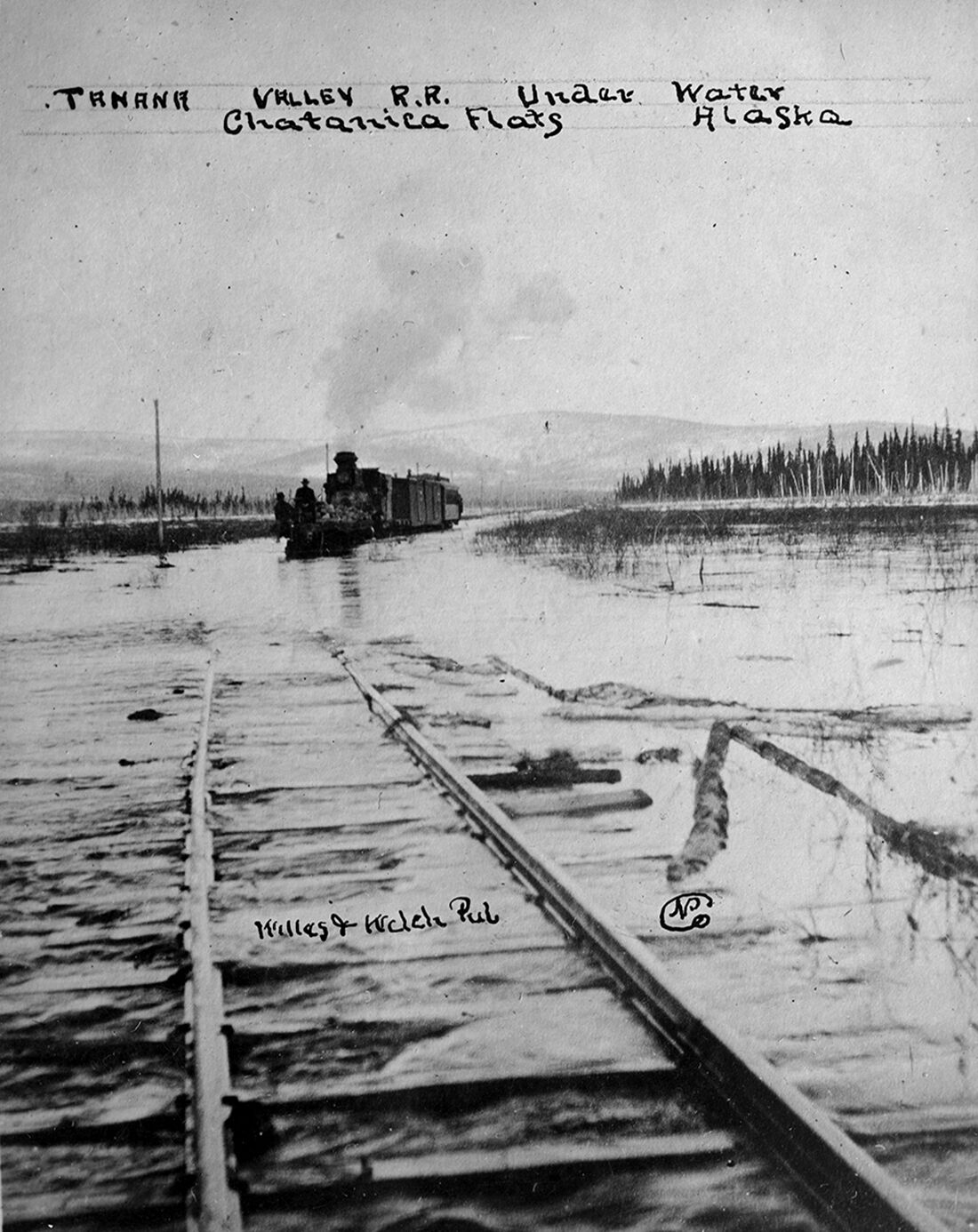 The following article is a partial transcription of an interview of John Joslin that was done in 1935. The part about his pessimism regarding the project of the Matanuska Colonists has been left out of this transcription.

…..A member of a family long prominent in civic and farming affairs in the west end of Davidson County, Mr. Joslin came back to Bellevue to make his home in October, 1933. With the exception of several visits, he had been in the west since 1894, when he went out to Idaho as a mining engineer and to recover his health. A brother, the late Falcon Joslin, had gone before him to the west and had settled in Seattle where he practiced law. Then in 1894 a man by the name of Carmack struck “pay” gold up in the Yukon Valley and like thousands of other young men, who had felt the lure of the yellow metal, the two brothers joined the rush.

Travelling by boat from Seattle and then by packtrain and on foot, as was necessary in those days, the brothers went to Dawson, where one of the first stampedes had occurred. Surveyor and lawyer, they made a good business team in the new country, where fortunes were being made and lost overnight. Despite the more restrictive mining laws of Canada the brothers amassed capital and engaged in gold mining ventures of all sorts.

“Falcon acquired something of fame as a lawyer, politician and financier in the territory, but I reckon I got out and wrestled with the raw country more in my time,” says Mr. Joslin, as he recalls the physical hardships of those years—travelling un-blazed trails on foot with a heavy grub pack or making seventy-five-mile trips over icy, foaming rivers in light boats which shot the rapids.

Always looking for a big strike of gold, in 1903 Mr. Joslin went down to the Forty-Mile River to Fairbanks, a new gold camp on the Tanana River, which is a tributary of the Yukon River. The gold stampede of 1902 at Fairbanks had brought 5,000 people rushing into the new little settlement. Overnight, Fairbanks became a bright spot just under the Arctic Circle. Men, impatient with their claims in other parts of the Yukon, had stampeded these with the will o’wisp dream of striking pay dirt here. In a letter to his brother back in Dawson, Mr. Joslin outlined the prospects at Fairbanks. In two weeks’ time he visited nearly every prospect hole for miles around the camp, from his mining experience he decided there was a pay-lode there, though it had not been found. The lay of the land was right for gold. But his advice to his brother, Falcon, was to come, not to dig gold but to build a railroad.

And that’s just what the two brothers from Davidson County did. They built the Tanana Valley Railway, thirty miles of it, from Fairbanks out to the gold camps as far as Chatanika. With capital from Seattle and London, where Falcon Joslin went for financial aid, the two brothers built their railroad, which more than ten years later was to become an important link in the government-owned 440 miles of rail form Fairbanks to Seward.

Mr. Joslin’s prophecy to his brother on the future of Fairbanks was sound, for the town grew to a population of 10,000 for a time, though today it is a mere 3,000 and for a number of years after the rush, gold poured out of the camp in huge sums. The biggest years were 1907, 1908, 1909 and 1910. The banner year was 1909 when ten million dollars’ worth of gold was shipped out of Fairbanks.

Asked how he knew there was a “pay” streak near Fairbanks, Mr. Joslin will tell one of the basic principles of the way gold lies in the earth. Always along the streams of Alaska, where the glaciers of centuries ago deposited their silt in the valleys, there is some gold. The gravel in which the gold is located is covered by muck which may be two feet deep or two hundred; two feet from the stream or two thousand feet from it.

“You know gold is an elusive metal. Honestly, one can pour it from one sack to another and lose some of it, the scales will show. The prospectors of thirty years ago lost a lot. Our mining was a wasteful business and today the big dredges are cleaning up over all that territory where we have been before. They are getting it too, scooping the gravel out in great bucketsful, then washing it clean of muck with hydraulic pumps. Those companies will keep getting gold, and at a profit, where hundreds of miners have worked before. The dredges didn’t come in through until individual mining no longer paid.”

Mr. Joslin surveyed the route for the Tanana Valley Railway and assisted his brother in managing the line which had one train a day, thirty miles to Chatanika. The railroad paid well at first, during the summer months of 1906 showing a profit of $36,00 a month. But the competition of teams, hauling supplies into the gold camps and delivering from customer to customer, instead of only from station to station, and later the competition of the automobiles on Alaska’s developing highways crippled the railroad business. Strangely on that railroad under the Joslin management no one was ever killed by a train and the company was never sued for damages. In 1917 the brothers sold their railroad to the government.

From 1917 to 1933, when he came back to Tennessee, Mr. Joslin was employed as an engineer by the Alaskan Road Commission, which had been set up in 1906 with three United States Army men at is head. The years he had spent prospecting, travelling the lonely wild upper reaches of the Yukon River and the Tanana Valley were the practical experience which the government needed from Mr. Joslin. One of the bitg jobs he did was locating the Valdez trail of 150 miles, travelling with five or six pack animals, a small crew of workmen and enduring hardships of the trail, when the thermometer showed fifty or sixty degrees below zero. Today this trail is a graveled highway, which can be traveled many months of the year.

“The old saying in Fairbanks is that its seventy-two degrees below zero when a bottle of Perry Davis’ Pain-Killer, and old-time patent remedy, freezes. And one morning in Fairbanks I saw one frozen nearly solid.”

Heading a surveying party entailed a knowledge much wider in scope than the fundamentals of engineering which Mr. Joslin had learned as a student at the University of Tennessee. For instance, if one travels with horses, using the frozen bed of a stream for his road, he must know the proper kind of shoeing and corking for his horses’ feet. He must know how much fodder to take along for every day for the animals. He has to know about good food, easily carried for his men too. Beans are cooked with meat in advance of a hard trek and then taken outdoors and stirred until they freeze separately and are like dried ones again. Then out on the trial a handful form the sack can be melted out in a pan. They could not be handled so well if frozen in a solid mass. Often Mr. Joslin had to plan grub for fifty or seventy-five men in advance, but in those days sugar, flour, salt, beans and bacon were enough, for moose provided plenty of meat. The Norwegians in Alaska have taught Americans the fine food value of codfish, too, Mr. Joslin says.

Today Fairbanks, which Mr. Joslin called home so many years, is a town of 3,000. Everything from imposing frame and stone houses to log cabins make its streets resemble those of any new town. There is an electric power plant, which in wood-burning days used twenty-four cords of wood a day to keep the townspeople supplied with light during the six months of winter, when its only daytime for five hours. There are gardens at most of the homes, and necessities and luxuries from the States are not as high as they once were.

But as Mr. Joslin Remembers the town when there were only three women there, later when saloons, gambling houses and palaces of joy lined every street. For the men who went to the Yukon country for gold spent it freely and lived recklessly while they had it. There were all sorts of people in the camps, men and women impatient to make money, easy-going when they had it, staking their all on a big strike tomorrow. There were virtuous women and “sporting” women, “who flock wherever men have money,” and among the latter, Mr. Joslin says, one was apt to find as fine characters as among any other class of people in the world. They lived in a man’s world and bravely adapted themselves to what life had to offer, he says.

Alaska introduced Mr. Joslin to the people of many races—Russians, of the second generation who had intermarried with Indians, because “the Russians seem to have no class consciousness as we do, something we got from the English”; Norwegians, who because of their training in their homeland make good farmers and fishermen; French-Canadians, who can handle boats in a swift glacial stream as no other people in the world; men from every part of the world.

Mr. Joslin’s wife, now dead, was one of the first three women to reach Fairbanks in 1903. She was a Seattle school teacher, who had tired of the humdrum life and small pay of the schoolroom. She resolved to seek her fortune in the gold country and so she went to Dawson by boat and from there went by horseback down the Forty-Mile River on a 500-mile journey to reach Fairbanks. The newcomers went in parties, and one rarely traveled the frozen rivers in the winter without meeting up with others, Mr. Joslin said.

“On the way to Fairbanks, my wife picked up a cat and you know that cat became the grandmother of all the cats in the camp. Investing her savings in one mining adventure and then another, my wife bought a lodging house and by grub-staking prospectors she had a share of their profits when the men made a strike.”

But all that was long ago— his wife is dead, his brother, Falcon, who built a railroad with money from London is dead, too—and Fairbanks is far, far away to the last of the Joslin brothers, who quietly works his garden out near Bellevue, where a century ago his ancestors were pioneering in Tennessee. —End

Note: John Joslin and his brother Falcon were both members of Men’s Igloo No. 4 of the Pioneers of Alaska. John’s wife Harriet was a member of Fairbanks Women’s Igloo No. 3, along with being the 2nd Great Aunt of George and Clutch Lounsbury. She also owned and operated the early-day Columbia Hotel, that was located on the Eastern end of downtown Fairbanks.

This Pioneer History Nugget has been proudly brought to you by the Fairbanks Igloos of the Pioneers of Alaska, who would like to remind you that additional History Nuggets are also available on our website pioneersofalaskafairbanks.org.