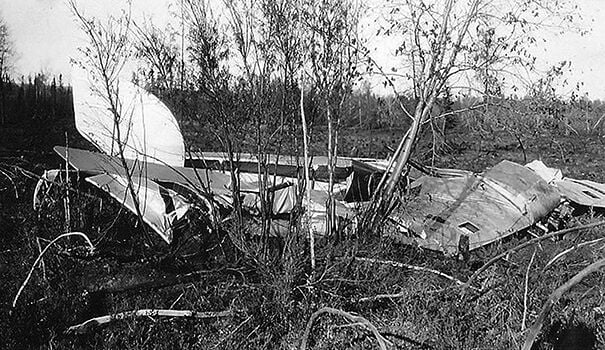 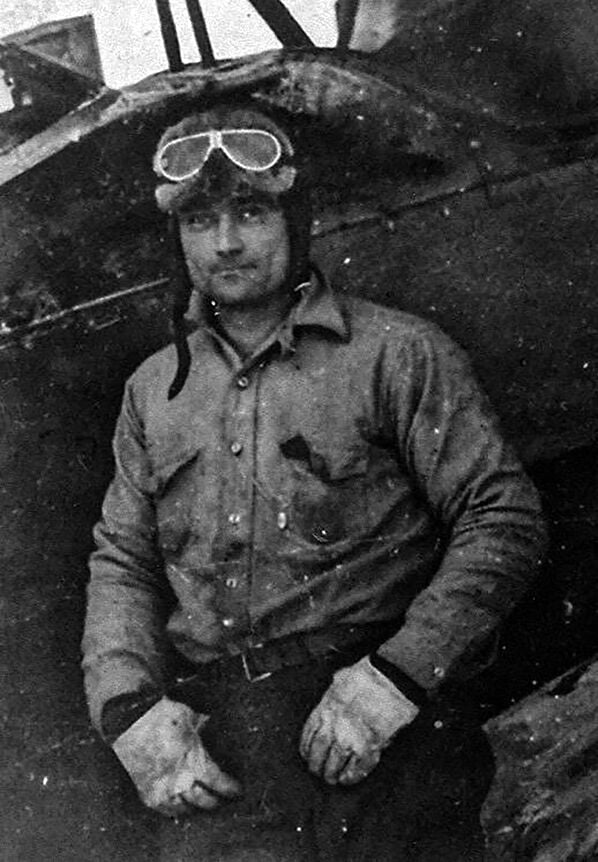 Ever since the first airplane took to the skies in Fairbanks, aviation has been an important part of life here in the Tanana Valley. Today’s History Nugget is about the first fatal plane crash in the Interior. Harold Gillam Sr., and Marcel Leroy Danforth flying together crashed two planes within a few weeks of each other in the late summer of 1928. The second crash took Danforth’s life, and Fairbanks aviators gave him an aerial tribute when his body left Fairbanks on the train for burial in Tacoma, his hometown.

Two men escaped injury yesterday afternoon when the airplane in which they were riding came down in an emergency landing field at the head of Engineer creek. The plane is said to have sustained considerable damage.

The men were M. L. Danforth, pilot, and C. H. Gillam, who was in the plane as a passenger. In landing near A. A. Everman’s residence on of the wings hit a small tree and the plane was turned into a patch of timber. The landing gear was torn off, the lower wing punched full of holes by the undergrowth, half of the upper wing crumpled up and the fuselage sprung.

Danforth and Gillam had started out for Brooks with a load of freight, but an overheated motor caused them to land on a bar in the Chatanika river. After making what repairs they could, they decided to return to Fairbanks. From the time of the take-off, however, trouble was had with the fuel system. Pressure to the gasoline tank could not be maintained and it was necessary to use a hand pump. Even then the motor would run steadily for only a few seconds at a time. Realizing that he might be force down at any time, Danforth went up to 5,000 feet in order that he might have a better chance to pick a field.

It looked for a time as if it would be possible to reach the home field but suddenly the motor “conked” and Danforth set the plane in as flat a glide as possible. He finally picked the partially cleared field near Everman’s as the best place in which to land. Seeing at the last moment that the speed was too great for the machine to be stalled into the field Danforth warned Gillam to brace himself for the crash and landed.

A few seconds later both men were out of the plane and surveying the damage. They were not even scratched.

Danforth is a veteran pilot with several years’ experience. He completed a course in flying at the naval training station at Pensacola recently. His skillful handling of the plane yesterday is said to have averted a much more serious accident.

The wrecked ship is being brought to town this afternoon. With the exception of the lower wing, all damage can be repaired locally, it was said. The plane is a Swallow of biplane design and is owned by the Fairbanks Airplane corporation. Piloted by Joe Crosson, it was the first airplane to make a commercial flight to Point barrow. Crosson flew to barrow in the spring of 1927 with the correspondent for the Wilkins expedition, going over the Brooks Range on the Northbound trip and returning by way of Kotzebue.

M. L. Danforth and C. H. Gillam narrowly escaped death today when the Jenny biplane which they had taken aloft only a few minutes previously fell one thousand feet or more and crashed.

Just how seriously Danforth was hurt could not be learned until and examination had been made at the hospital. Dr. J. A. Sutherland, who treated the flyer at the scene of the wreck, said he suffered some injury to his back. He was also cut about the face and bruised. Gillam was less seriously injured. Although cut badly about the face and his left ankle was sprained, or broken, he was able to walk from the wreck to a nearby road.

The plane apparently hit the earth at 12:36 pm, as the watch in the pilot’s cockpit stopped at that time. The accident was witnessed by several persons on Weeks field. They saw the biplane take-off, circle over the Fairbanks Airplane corporation field and then head west. It had attained an altitude of 1,000 feet or more when the motor was shut off and the two flyers could be heard talking. Then the plane suddenly went into a tailspin and plunged toward the earth. It disappeared behind a clump of trees some distance from the field.

In his room at the hospital this afternoon Gillam said he was flying the plane and Danforth was acting as instructor. Gillam had just made a turn and Danforth was instructing him as to the proper method of turning when the plane stalled and began to spin. Danforth took hold of the controls but could not level the ship off.

That the flyers lived, is almost undoubtedly due to the fact their craft hit the ground in a quartering direction rather than head on.

Only a few minutes after the accident Pilot Ed Young and Chief Mechanic Earl Borland of the Bennett-Rodebaugh Airplane company took-off in an effort to spot the wreck. It took them some little time to find it and they circled the spot to give Alonzo Cope, Eugene Schrieber and another man who had started by foot, and idea of the location of the wreck.

The plane, a tangled mass of canvas and wood, was found only a few hundred yards below Leah bar, which is about a mile and a half below town. Gillam was already out of his cockpit and was supporting Danforth’s head. The latter was quickly extricated from his position. He was not pinned in.

More help arrived soon and on arrival of Dr. Sutherland strychnine was administered. Danforth was conscious from the time the first three men arrived. He was cheerful despite the fact that he was suffering considerable pain. He asked constantly for water, which was secured as quickly as possible. He complained of numbness in his limbs and pain in his neck and several times expressed a desire that he could “go to sleep and forget all about it.” He asked how Gillam was and the latter’s first query in the hospital was directed toward the condition of his comrade.

As soon as the stretcher was brought to the scene of the wreck Danforth was carried to the road and taken by automobile to the hospital, where a more detailed examination was to be made. General unfamiliarity with the country caused considerable delay and it was not until nearly 3 o’clock that the injured man was in St. Joseph’s.

Danforth is a trained pilot, having received training at the naval station at Pensacola, Florida, as well as having done considerable commercial flying, the plane was owned by Gillam, who had organized a flying school and retained Danforth as pilot.

Except the motor, it is improbable that any part of the plane will be salvaged. The wings are buckled, the fuselage twisted and splintered, and the tail surfaces broken. The motor is partly imbedded in the soft ground. The wreck lies in a comparatively clear space.

At 4:40 this afternoon it was learned that Danforth was suffering from shock and was in a semi-conscious condition. On account of the shock, he was not disturbed more than was necessary. Stitches were taken in a long scalp wound. The attending physician stated that the flyer had had a severe hemorrhage, either from an internal injury or from the scalp wound. His pulse was very weak, which, it was said, was to be expected after the shock and hemorrhage.

It was necessary to take several stitches in the cuts on Gillam’s face.

At 12:05 o’clock this afternoon M. L. Danforth died at St. Joseph’s hospital from injuries received Monday when the airplane in which he was riding plunged to earth in a tailspin from an altitude of over a thousand feet.

The end was painless. Danforth was taken to the hospital at 3 o’clock yesterday afternoon and about an hour later he lost consciousness, never to regain it.

Almost up to the very moment of his death there was hope that the youth and strong constitution of the flyer would pull him through but the terrific impact between airplane and earth had so wracked his body that life slowly ebbed away.

By this morning Danforth had partly recovered from the shock of the accident but internal injuries were manifested by hemorrhages, and it was these, coupled with head injuries, that caused his death.

Conscious from shortly after the time of the crash until he was in the hospital, Danforth had a clear idea of what was going on about him, but he sank into the coma without realizing that his hurts were so grievous that he would never awaken again.

The flyer was from Tacoma. His father, Marshal C. Danforth, is an officer of Joseph Warren Lodge No. 235, Free and Accepted Masons. A telegram was received from him this morning asking that everything possible be done for his son.

Danforth came to Fairbanks for the first time this summer. Before coming to Alaska, he had flown in California and Florida. On arrival here he became pilot for C. H. Gillam, who had organized a flying school.

Gillam who was with Danforth on the fatal ride, was hurt worse than was first supposed. In addition to a sprained ankle and general shock, his back was hurt and bones in his left hand broken. However, his condition is not serious, and he will probably be able to leave the hospital within a few days.

Danforth’s death marks the first fatal aviation accident in Interior Alaska, where hundreds of thousands of miles have been flown in the last few years. Palmer Hutchinson, correspondent with the Wilkins Arctic expedition, was killed here by a plan’s propellor, but never before has there been a fatal accident which occurred as a result of mishap in actual flight.

Hail and farewell were bid to M. L. Danforth today by his comrades of the skies, who dropped wreaths on the train which was to bear his body toward its last resting place, and who accompanied the train a short distance out of Fairbanks.

In formation, three airplanes piloted by Ed Young, Noel Wien and A. A. Bennett rose into the air a short time before the train was to leave. They circled the depot several times and then, one by one, coming down until they were only a few feet above the train, roared past in a last salute of farewell. Taking up formation once again the planes pivoted and returned to drop wreaths.

Note: The airborne farewell tribute that was given as the train left Fairbanks was repeated over the train that left Fairbanks with the bodies of Ben Eielson and Earl Borland in 1930, and yet again when the train left carrying the body of Ralph Wien later in that same year. In both of those subsequent mournful tributes, Harold Gillam was at the stick to give this special farewell honor to the bodies of his fellow aviators on their last journey out of Alaska. This Pioneer History Nugget has been proudly brought to you by Fairbanks Men’s Igloo No. 4 and Women’s Igloo No. 8 of the Pioneers of Alaska, who wish to remind you that History Nuggets are posted every Monday to their website at pioneersofalaskafairbanks.org.