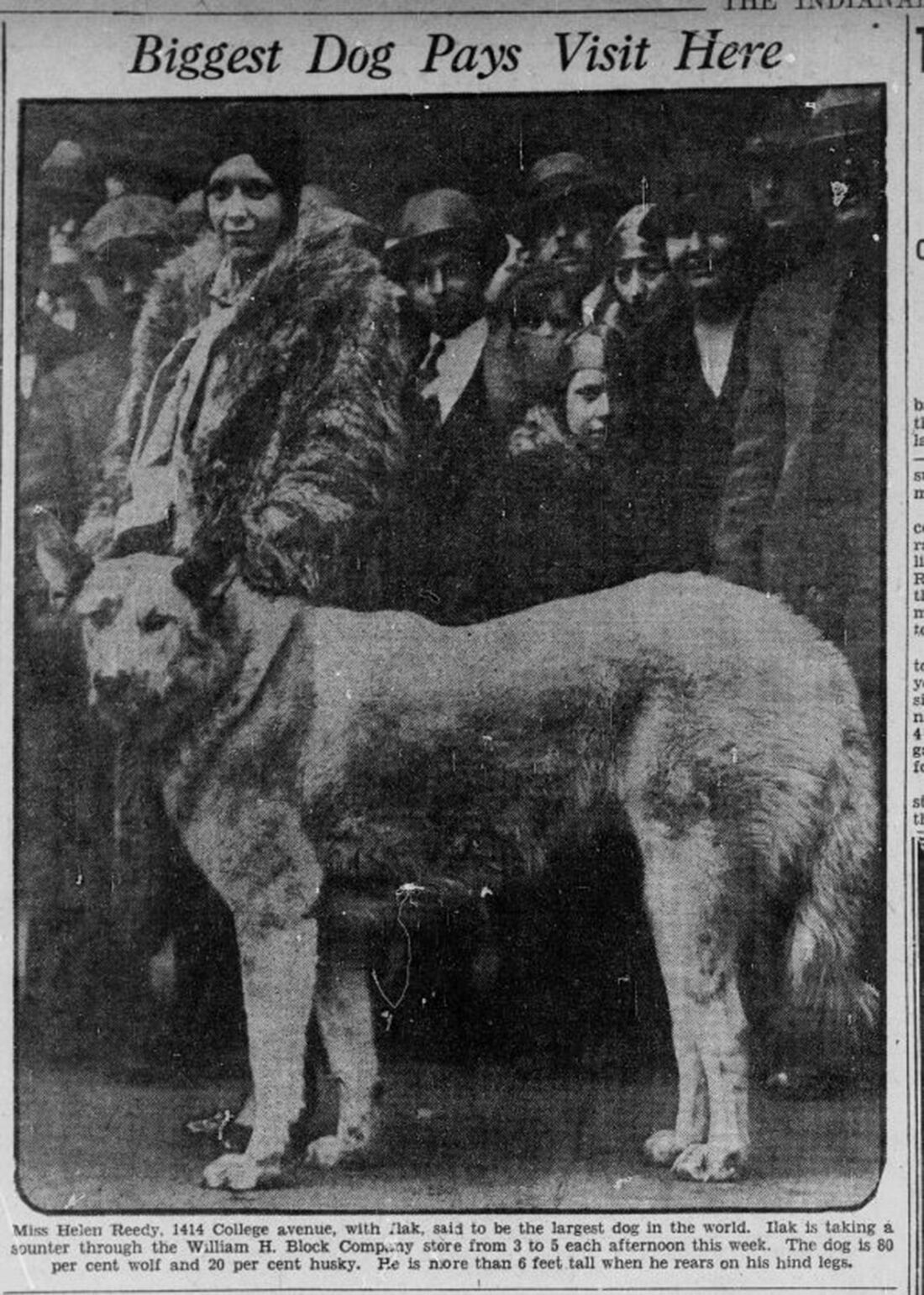 Photo of Ilak from the Indianapolis Times published on January 14, 1929.

Empress Theatre advertisement published in the August 8, 1929 edition of the Fairbanks Daily News-Miner.

Photo of Ilak from the Indianapolis Times published on January 14, 1929.

Empress Theatre advertisement published in the August 8, 1929 edition of the Fairbanks Daily News-Miner.

The 1920’s were noteworthy for the Hollywood film industry and Fairbanks had a dog that became a famous movie star and was even part of Charlie Chaplin’s “The Goldrush” film premiere celebration:

FAIRBANKS DOG A HIT IN HOLLYWOOD

“Ilak,” the big white Greenland huskie purchased by a movie director from Theodore Van Bibber of Fairbanks, was one of the prime attractions at the premiere showing of Chaplin’s new comedy “The Gold Rush,” at Sid Grauman’s Egyptian Theater at Hollywood during the past season.

On a raised platform surrounded by a railing, in the patio or famous open-air lobby of the Egyptian theater, while the thermometer registered 100 in the shade, Ilak sat on a cake of ice beside a ballyhoo man or speiler, who sweltered in the make-up of an Alaskan sourdough, with fur cap, parka, mukluks and mittens, and entertained the crowd with lurid stories of his imaginary experiences in Alaska, and of the marvelous exploits of the dog. They were continuously surrounded by a large crowd which eagerly swallowed the spieler’s hokum as gospel truth, and serious tourists from the East, in over-sized horn rim spectacles, clicked their cameras and jotted down notes in their little books. Ilak also appeared as one of the characters in the prologue of the show and climbed the Chilkoot Pass with a pack on his back. He draws down $50 per week when working in Hollywood, and his owner has several times refused $1,000 for him.

“A Naturalist in Alaska”

“….We had seven dogs — four which were the nucleus of the team my brother had been using, and three more that we secured from Van Bibber, a rangy old-time miner, hunter, trapper, and dog man, who kept his dogs on the banks of the Chena River. The tall, raw-boned Van Bibber had such a big, deep voice that, when he thundered the names of his dogs—Irish, Dawson, or Hooch— the names were never forgotten; they still ring in my ears. One of the dogs, a huge, yellowish animal, with some strange outside blood in his veins, with mule-like ears, the runt of the litter when born, weighed 140 pounds. This was to be his first full winter of work, for he was just past puppyhood. We wondered if he might not be too clumsy, but we soon learned that his gait was a tireless pace. His later career was unusual. He was used as a hero dog in a Norman Dawn movie because of his appearance; then he showed up posing on a Charlie Chaplin “Gold Rush” float in California. Still later he was used as an exhibit in an eastern chain of department stores, and a caption under a picture of him in a New York newspaper said he weighed 190 pounds, which he probably did. When he joined the movies, his name was changed from Irish to Ilak. But I am sure that his happiest days were his hardest, those spent leading one or our two teams into the Brooks Range. “

Daily crowds throng the forecourt of Grauman’s Egyptian Theater to admire Ilak, the great Arctic white wolfhound, who by his gentle and affectionate disposition belies the fact that he is three-quarters wolf. Ilak weighs 195 pounds and is more than six feet long. He is the idol of the children.

Famous dogs of the screen, Rin Tin Tin, Peter the Great, Cameo Queen and the others, had attended a party given in honor of the birthday of Ilak, the great wolfhound in Chaplin’s “The Gold Rush.”

In August of 1929 Charlie Chaplin’s masterpiece, “The Gold Rush,” premiered here in Fairbanks. It was interesting to see how it was promoted locally to Fairbanks’s residents who flocked to see it at the Empress Theatre downtown:

He’s here…our old friend Charlie …he of the funny feet, cane, and derby…he’s back with us again…and this time he’s funnier than ever.

Chaplin …in “The Gold Rush.”

Chaplin as a poor lonely prospector…and then Chaplin as a multi-millionaire. And speaking of millions…three weeks ago, Charlie turned down and offer of ONE MILLION DOLLARS A YEAR…this contract called for the making of three pictures within the year…but Charlie said “No.” His argument was that he wanted to make nothing but super-specials in one year. As Charlie told them…”I’ve got about all the money I need, and I’m not going to turn out a bunch of pictures that are merely …just another picture… each one has to be as close to being perfect as is possible for time and money to make them… and you can’t make ‘em in a hurry. Three super-specials in one year are out of the question…it simply can’t be done.”

There you are folks…how would you like the opportunity of turning down a cold million dollars for one year’s work????

A million I s a lot of money…even if you haven’t got it… but don’t be downhearted….remember that there are many wealthy men who are in the same class as you and I … a man may have $400,000 but nevertheless he’s still working on his first million…but he hasn’t anything on us… for we also are working on our first million.

But getting back to the “Gold Rush”…don’t go out and buy up fifty dollars’ worth of books on mining…why see the show tonight and for fifty cents you’ll learn more about the game than you’ll ever find in any book.

Why roam around the hills for days and days…seeking the elusive metal…watch Charlie do his stuff…climb up the side of a mountain…trip…slide down …don’t stop until you hit bottom…and then look around and find a mountain of solid gold!!!!!!

That’s the way to do it.

And mining methods….well…you’d better let Charlie show you that, too.

And dancehall etiquette…that’s something that we should all know. For one of these days there’s going to be another big strike somewhere… and everybody’ll be there… and there’ll be dance halls in the new camp, of course. And won’t it be terrible if you don’t know dance-hall etiquette? Look at all the free drinks you might miss…

Let Charlie teach you the technique of Bumming them…it’s quite an art… and how to make love. That’s it … how to make Love…there’s where he shines…five minutes with him is like a flock of Cleopatra’s weekends.

Charlie has a sidekick in this picture…Mack Swain…Charlie and Mack used to make pictures together way back in old Keystone comedy days…that’s when Chaplin first made America laff. Those were the good old pie-throwing days …when a comedy wasn’t any good unless each and every player was drenched in custard.

Things are different today, however. It isn’t a case of slapstick anymore. Now it’s a matter of burlesquing a legitimate plot…which is quite a difficult task. It’s much easier to make an audience cry than it is to make them laff.

And if a star can take you thru 10,000 feet of film and keep you laughing through the entire picture…he’s an artist… and that’s what Chaplin does tonight. There are ten reels to “The Gold Rush”… and it’s just one continual roar of laughter.

It’s one long picture…so come early and see it all.

Admission will be fifty cents for the adults and two bits for the kiddies.

Lines to remember…”If you don’t believe that ignorance is bliss…just compare some folks’ courtship with their married life.”

“There is no temptation strong enough to assail the Heart that Truly Loves.”

Flapper Sue Says…”The next shade in dress fabrics probably will be known as Lipstick Red.”

He will keep you laffing from the time he makes his first appearance up to the final clinch.

If you missed the big Klondike Ruch of the Olden Days….here’s your opportunity to get firsthand information as to what did NOT happen there. Here are a few of the highlights of the picture:

Chaplin dressed in California clothes….out in 50 below weather, battling a raging storm.

Chaplin falling in love with a dance hall girl.

Chaplin doing and “Oceana Roll”….with the help of two forks and a couple of buns, he does one of the cleverest bits ever screened.

Chaplin and his partner hunting their lost “Mountain of Gold.”

A storm carrying their cabin to the edge of a mountain….with half of it resting over the edge.

And then Chaplin as a multi-millionaire.

These are just half a dozen of the big laff scenes…and there are many others.

Chaplin tires his hand at a bit of drama….but how can anyone keep a serious face watching Charlie....

We start the program off with a Fox News….so come early and see it all.

Tomorrow is Saturday….that means Matinee at 2:30. Send the kiddies….come yourself. We feature candy, community singing and a splendid picture show.

Note: It is interesting that Fairbanks had a famous dog that was associated with the famous movie about the crazy event that brought everyone to Alaska and the Yukon in the first place. Of course, it took almost four years for Chaplin’s movie to make its way up to Fairbanks, and it was shown at all the theaters that were owned by Capt. Austin E. Lathrop in Cordova, Valdez, Anchorage, and Fairbanks. If you have never seen “The Gold Rush” by Charles Chaplin, you are really missing something special. This star-quality History Nugget has been proudly brought to you by Men’s Igloo No. 4 and Women’s Igloo No. 8 of the Pioneers of Alaska who would like to remind you that more History Nuggets are available on our website at pioneersofalaskafairbanks.org.