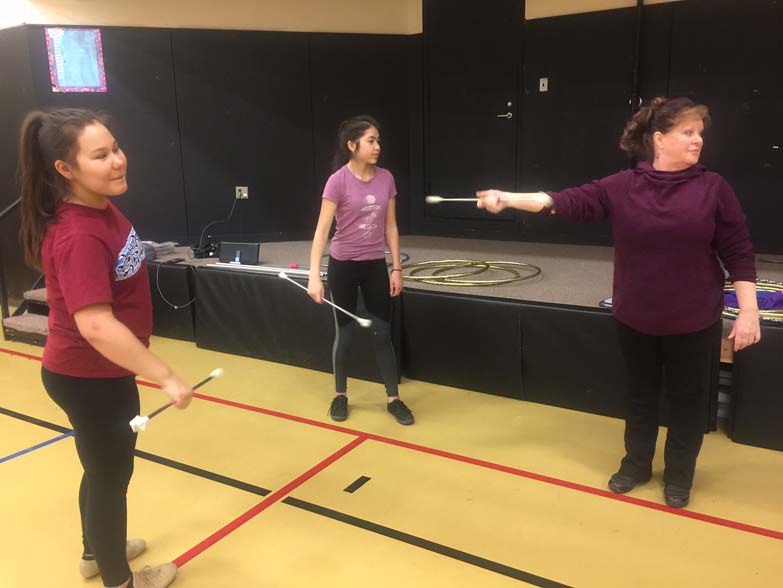 There was lots of time for personal instruction. 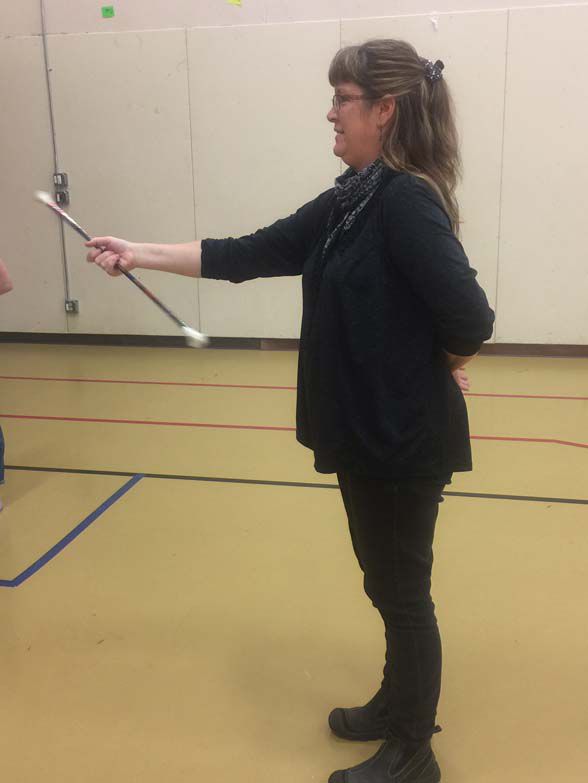 There was lots of time for personal instruction.

CANTWELL, Alaska — When Melinda Haley was in fourth grade, she watched someone at her elementary school twirl a baton at a local talent show. She stood in the middle of a big crowd of students, craning her neck to get a better view. It was so hard to see.

“Occasionally, her baton went up in the air and she caught it,” Haley recalled. At that moment, she discovered her passion.

The little girl went shopping for a baton of her own and found one that even lit up.

“I fancied myself a baton twirler from that moment on,” she said.

Haley lives in Cantwell now and spent an afternoon sharing her talent with adults and children who probably never thought about baton twirling before. She shared her own early baton twirling history, remembering when she enrolled in classes, then practiced in her mother’s sewing room, every night for a week, preparing for her first class.

That hard work paid off as she eventually competed in a national competition as a student — twice.

“I also competed in individual events,” she said. “I was a fairly inexperienced twirler, so I did really good at marching.”

When she turned 18, she stopped twirling and started coaching beginners in both Anchorage and Wasilla for a couple years. Then she moved to other communities.

“Fast forward five years, and here I am,” she said. “I’m feeling really lucky because we live in a community that is super interested in their kids and in creating events and activities for their kids.”

Baton twirling, she said, is a skill anybody can learn.

“It’s taught in such a way. It’s really simple, and then you keep building on it,” she said. “You learn more and more skills and are able to put more things together. In a beginner class, you may teach someone the basic twirl, turn that into a figure eight and then into a flourish.”

Chris Basile of Healy showed up for the free workshops and picked up where she left off decades ago, impressing everyone with her baton twirling ability. But other students there tried it for the very first time.

In addition to Haley, other expert twirlers were there to provide personal instruction. Several members of the Alaskanette Baton Corps drove up from Anchorage to share their talent with the group. That nonprofit provides weekly lessons and opportunities for dedicated twirlers to compete.

And it’s not just batons. The three twirlers who demonstrated their talents also performed with both fans and hula hoops.

Anyone interested in private lessons, in the Denali Borough, can arrange classes with Haley by calling 349-5222 or emailing alaskanettes@gmail.com. For more information, see www.AlaskaBaton.com.

Reach columnist/community editor Kris Capps at kcapps@newsminer.com. Call her at the office 459-7546. Follow her on Twitter at twitter.com/FDNMKris.