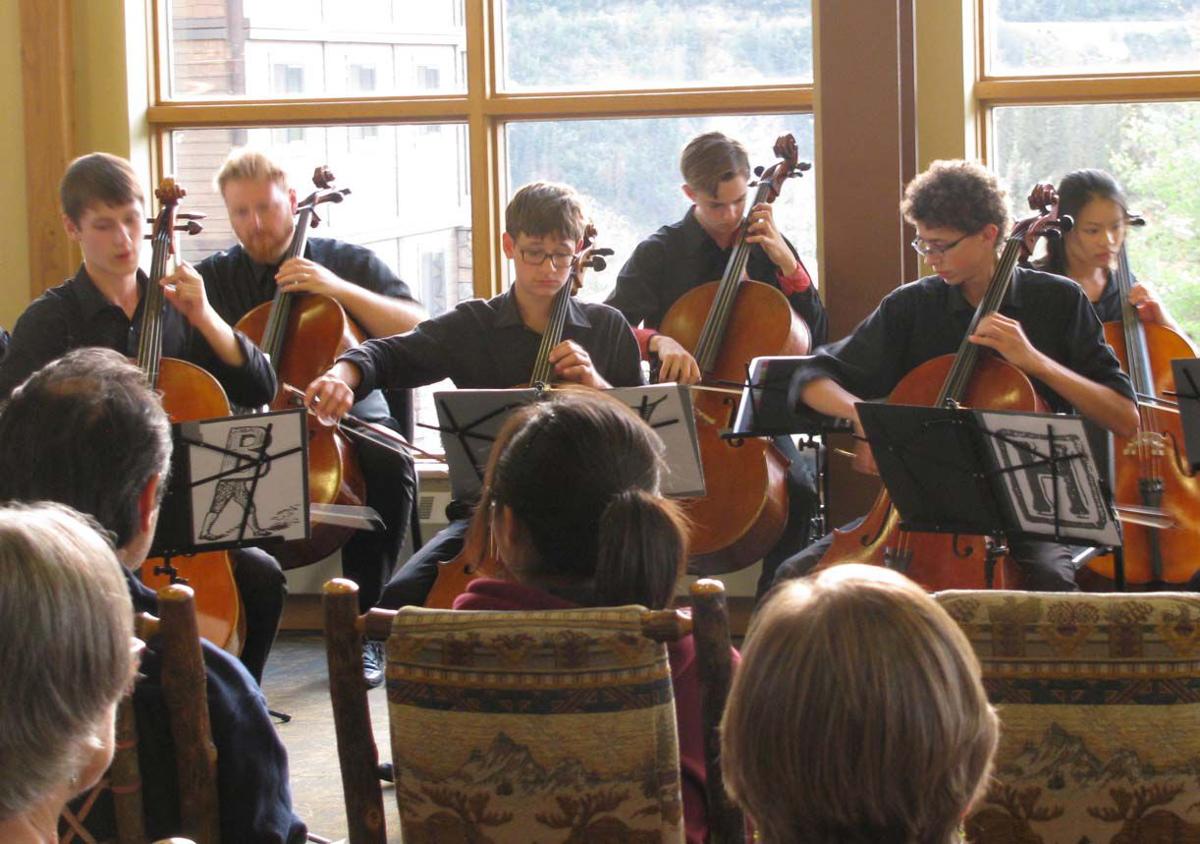 Cellists perform at their concert at Denali Princess Wilderness Lodge. 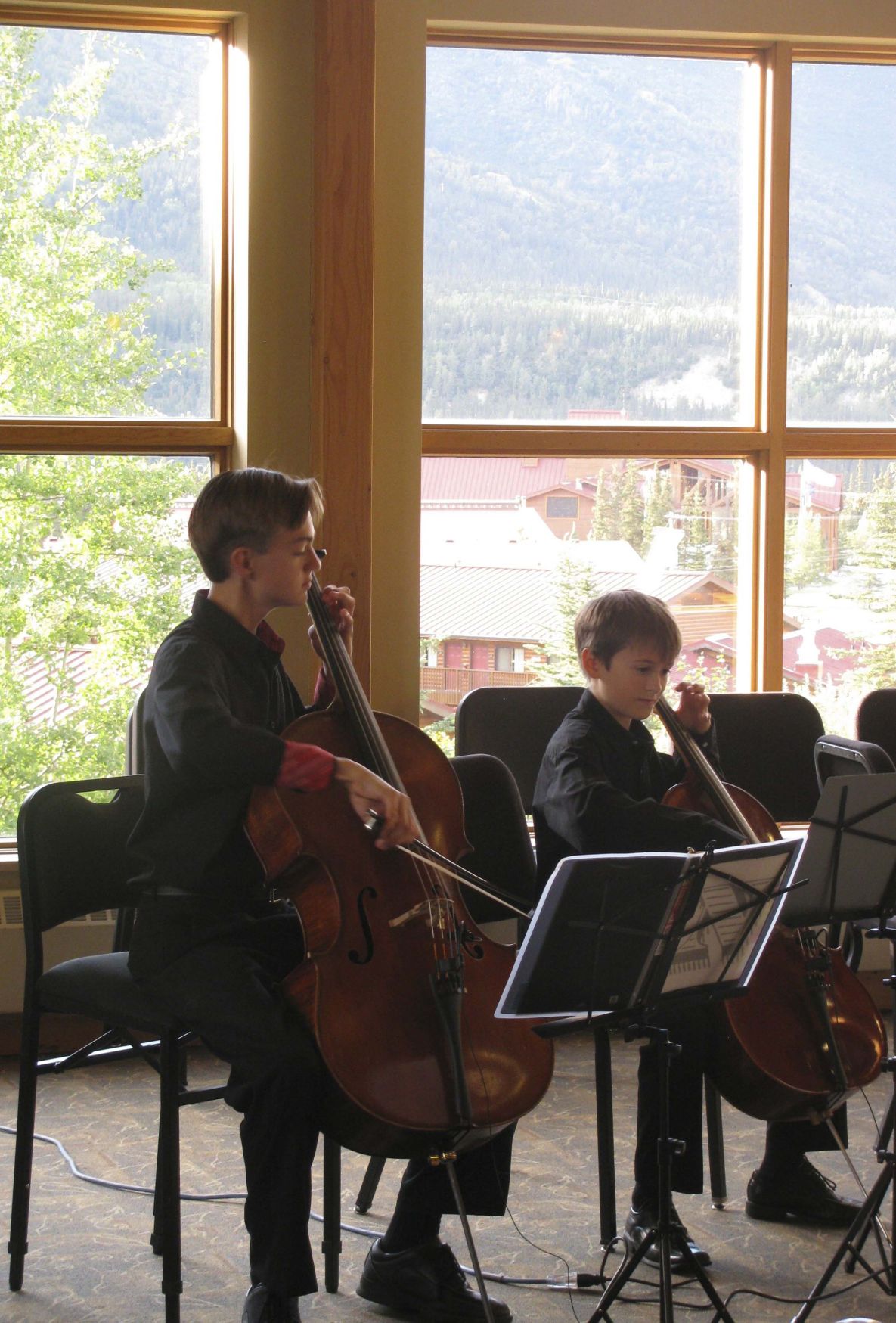 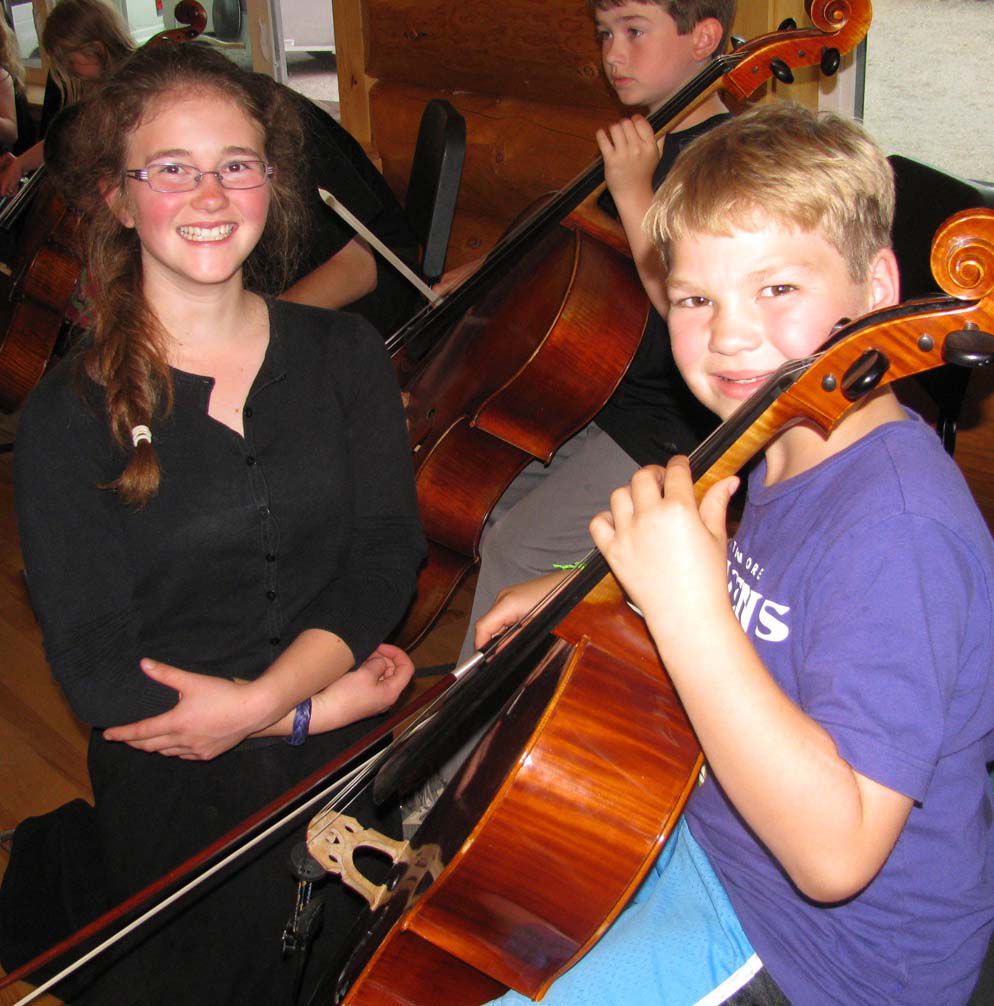 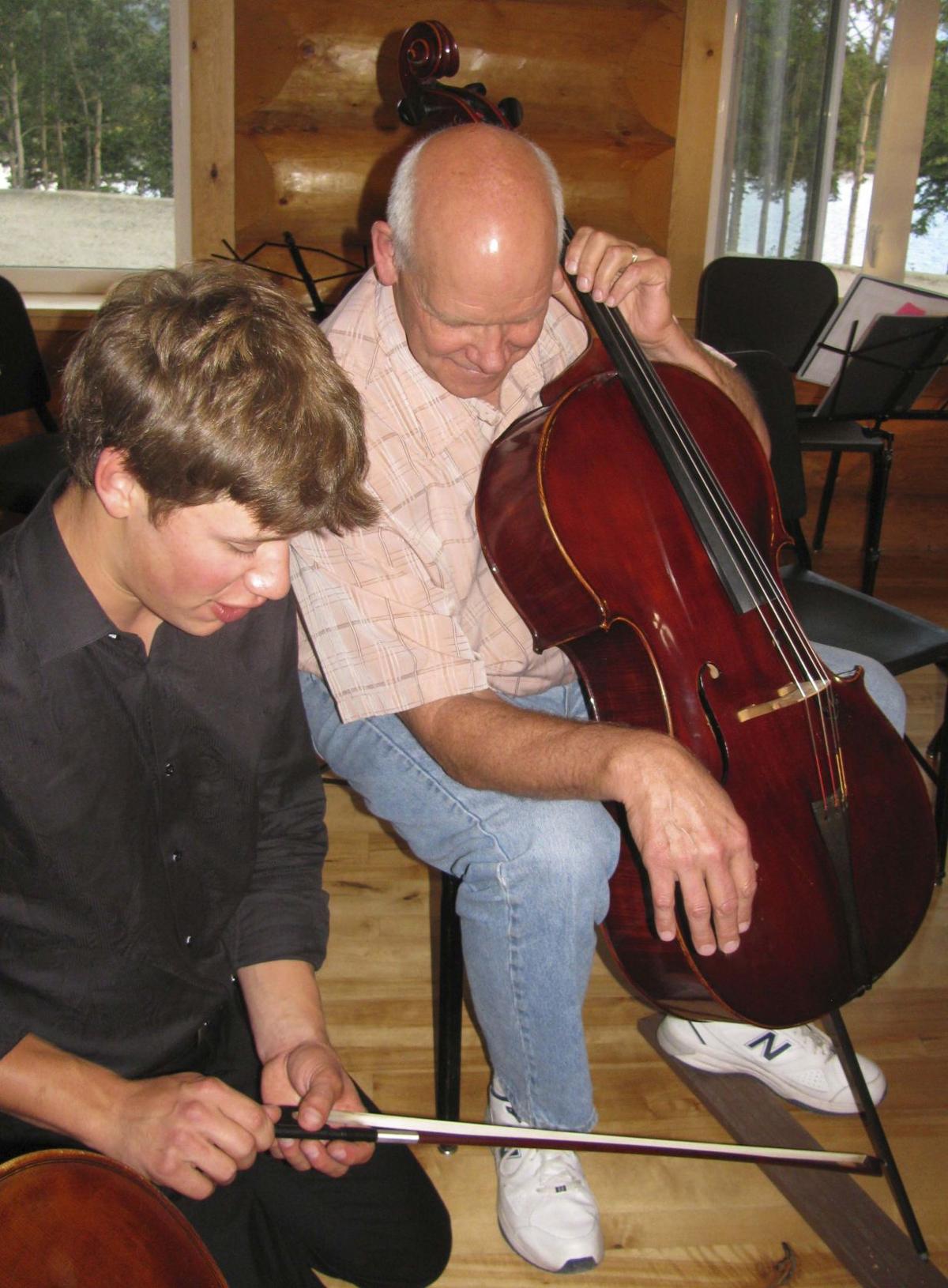 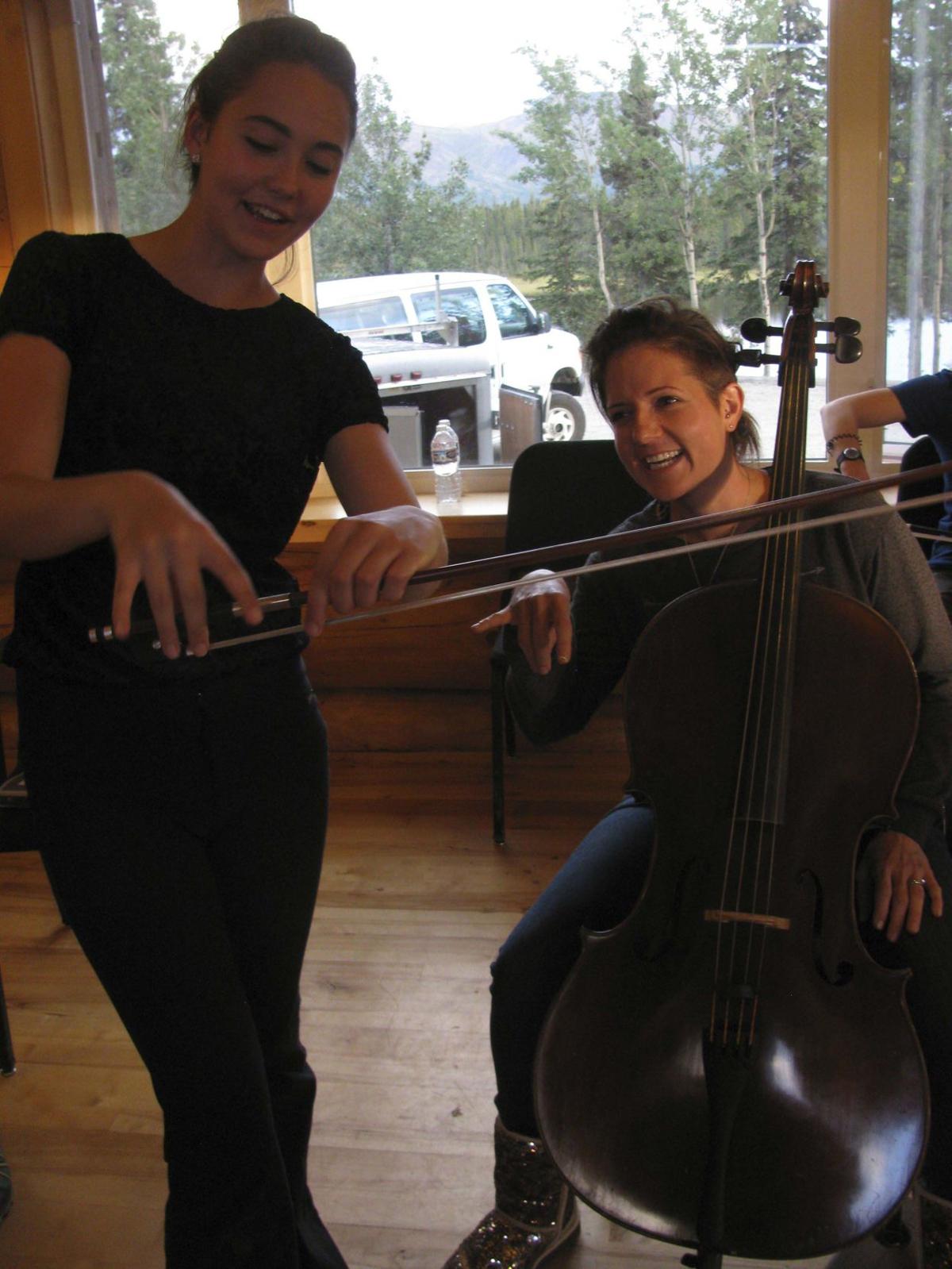 Hannah Barkey of Nenana is ready to learn from expert cellist Noelle Roberts.

Cellists perform at their concert at Denali Princess Wilderness Lodge.

Hannah Barkey of Nenana is ready to learn from expert cellist Noelle Roberts.

FAIRBANKS — I never thought much about cellos, until I encountered young musicians with the Alaska Cello Intensive. Now I have a serious case of cello envy.

Fairbanksans were lucky enough to have multiple opportunities to see and hear these young musicians in concert throughout Fairbanks this past week. The group also performed in the Denali area.

The Alaska Cello Intensive is a three-part series of workshops that provide focused cello instruction and ensemble work for college-bound and elementary students. It differs from other music intensives in that at the end of day, the cellos get put away and musicians experience everything outdoors that Interior Alaska has to offer in the summer. This is the program’s fourth year.

“For me, it started as an educational opportunity,” said Rebecca Levey, a cello mom and organizer of the camp. “What it has turned into is community building. I didn’t realize how important community is to education.”

Fairbanks is the perfect place for a music camp, she said. Studying music is a rigorous indoor activity. In music camps her sons have attended outside of Alaska, the study ends for the day and students remain indoors.

“This camp is also rigorous,” she said. “But we put our instruments away at 5:30 p.m. We go blueberry picking, kayaking, hiking. We even had a blueberry pie-eating contest.”

The group picked blueberries on Murphy Dome, enjoyed an outdoors hot dog roast, made blueberry pies, then “tied our hands behind our backs and ate them with our faces.”

These special bonding experiences, she said, bring more to the music that the students study.

“In music, you actually have to have something to say,” Levey said. “You can play the notes, but if there is no soul behind it, it’s not music right? An audience can tell the difference between a child playing notes and playing music.”

That was certainly the case at the concerts I attended last week. In the Denali area, audiences look forward to these cellists every year. Nobody knows the musicians personally, but because they play with such passion and make it look so fun, we feel like we know them. More than one audience member quietly commented to the person next to them, “Oh my, he has grown so much since last year.”

The cellists can usually count on standing-room only audiences in Denali, and both concerts received standing ovations at Tonglen Lake Lodge and Denali Princess Wilderness Lodge.

The Alaska Cello Intensive partners with the University of Alaska Fairbanks.

“It’s the perfect partnership,” Levey said. “A lot of kids don’t go on to college because it’s foreign to them. These kids are all familiar with the college campus and being on college campus. It’s just another part of being in the program.”

The sense of community also comes from the variety of ages that take the program.

The cello choir this year included 19 students, ranging in age from 7 years old to 18 years old. Teachers also played in the choir as did former students who are now mentors. Six faculty members teach the young cellists. The program remains the same at its core, but it evolves every year with leadership and mentoring roles changing as young musicians get older.

Cellist Karl Knapp, formerly of Fairbanks, is one of the instructors.

“It’s just a constant joy,” he said. “I look forward to it every summer, every year I’m here. As much energy as I can provide, they turn it right back on me. They challenge me to be better. It’s a wonderful thing to see in students.”

Other faculty this year include Mary Walters of Seattle; Alice Ann O’Neill of Cincinnati; Peter Howard of St. Paul; Bryan Hall of UAF; and Jim Spontak and Jamila Hiashwe, both of Fairbanks.

The camp also includes a sibling violin program, so that families with other young musicians can participate as well.

But it is really all the parents who help make it happen, Levey said.

“They see the value of music, they’re just willing to do whatever it takes,” she said. “They’re Alaskans. They know if it’s going to happen, they have to do it themselves. I couldn’t do it without the parents.”

At the end of the Tonglen Lake Lodge concert, cellists invited audience members to try playing the cello themselves. This is always a very popular invitation.

One little girl from Cantwell is already planning her musical career. She just started taking piano and guitar lessons but told her mother, “Once I reach Level 6, we can totally go to Fairbanks.” This was her third year watching these young musicians play.

I also discovered that I’m not the only one with cello envy. Professional musician Caitlin Warbelow, a world-class fiddle player, told me I wasn’t alone.

“We all have cello envy,” she said.