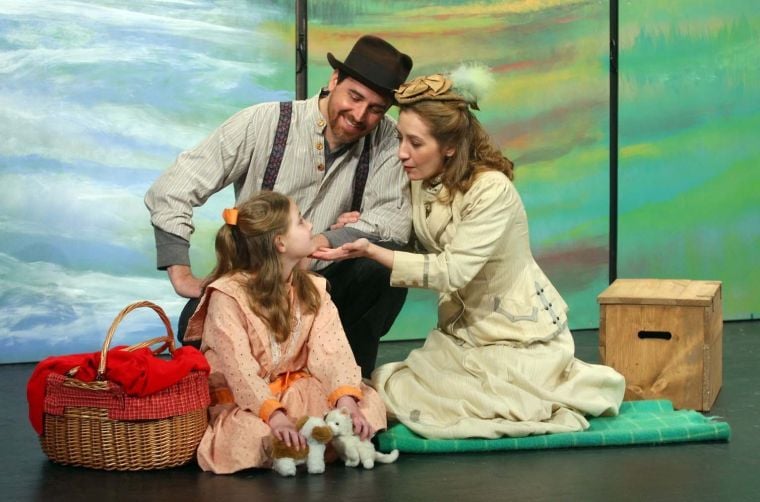 The Turner family — John, Abigal and their daughter Hope, played by Patrick Miller, Jamie-Rose Guarrine and Sydney Edwards — are shown in a scene from the homegrown opera called "The Color of Gold" at the Pioneer Park Theater. 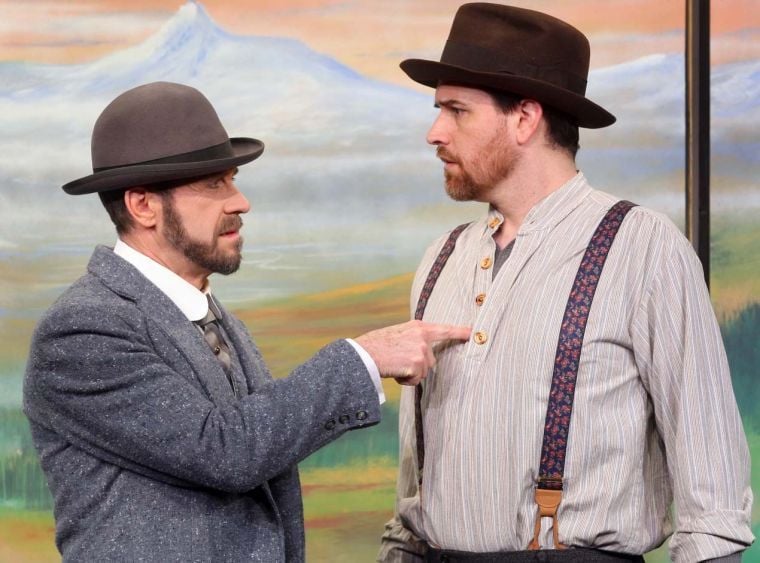 Shady saloon owner Ellson Babcock, left, played by Sylvain Demers, confronts John Turner, played by Patrick Miller, in a scene at the Pioneer Park Theatre from the premiere of the homegrown opera "The Color of Gold." 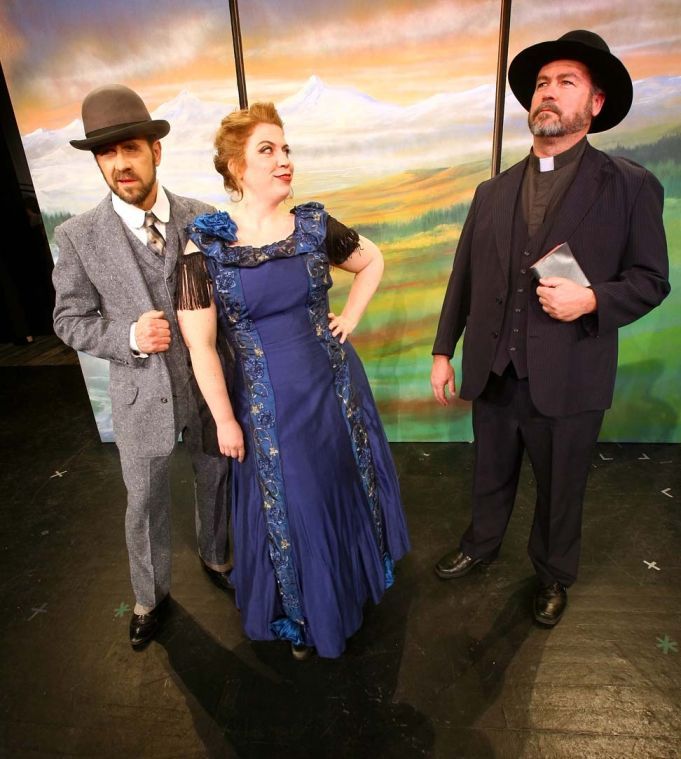 Preacher Finias Lynch, played by David Miller, faces off with saloon owners Ellson Babcock and Belinda, played by Sylvain Demers and MaryCatherine Moroney, in a scene from the premiere of "The Color of Gold" at the Pioneer Park Theater.

The Turner family — John, Abigal and their daughter Hope, played by Patrick Miller, Jamie-Rose Guarrine and Sydney Edwards — are shown in a scene from the homegrown opera called "The Color of Gold" at the Pioneer Park Theater.

Shady saloon owner Ellson Babcock, left, played by Sylvain Demers, confronts John Turner, played by Patrick Miller, in a scene at the Pioneer Park Theatre from the premiere of the homegrown opera "The Color of Gold."

Preacher Finias Lynch, played by David Miller, faces off with saloon owners Ellson Babcock and Belinda, played by Sylvain Demers and MaryCatherine Moroney, in a scene from the premiere of "The Color of Gold" at the Pioneer Park Theater.

FAIRBANKS — The rich history of Interior Alaska’s gold rush past is now set in song in an opera making its world premiere in Fairbanks.

“The Color of Gold,” composed by Emerson Eads and written by Cassandra Tilly, tells the story of the frantic blitz of miners who converged on the Interior in search of the precious metal, resulting in the founding of Fairbanks and its growth from boomtown to thriving city. The production is produced by Opera Fairbanks in conjunction with the 2014 Arctic Winter Games cultural events and debuts tonight in the Pioneer Park Theatre in the Alaska Centennial Center for the Arts.

The opera tells the story of John Turner and his family, who come North in hopes of striking it rich. What they are greeted with are the beginnings of an era filled with fellow miners and saloon girls, businessmen and scoundrels, and hopes and dreams set amid the crushing realities of pioneer life in Alaska.

“It’s been really rewarding to do this,” said Tilly, who wrote the libretto, or text portion, of the opera. “It’s filled a personal goal for me in that I’ve gotten to bring an idea to life on stage. It’s been a fascinating process. I think it’s great to have an opera based on and inspired by Fairbanks.”

For that inspiration, Tilly drew upon her love of history and nonfiction books chronicling Alaska’s gold rush past. Many of the characters are loosely based on real life pioneers, including the famed E.T. Barnette, Felix Pedro, Soapy Smith and Klondike Kate. Others are creations of Tilly’s imagination, such as the characters of Abigail and Belinda — two pioneer women dealing with vastly different circumstances.

“The big trigger was looking at my daughter, who was about 6 then when I started writing this, and I started thinking about options open to women in a gold rush town,” Tilly said. “If you didn’t have a husband, there wasn’t much open to you.”

An opera is born

Tilly, who is a founding member of Opera Fairbanks, had been considering writing an opera based on the city’s past. About two years ago, she approached the board of directors of Opera Fairbanks and pitched her idea. They gave her the go ahead, and she started the process of putting her ideas down on paper at nights and on weekends when she wasn’t involved with her career as an attorney with the Fairbanks North Star Borough.

“I was finishing up graduate recital work and was in ‘Carmen’ last year, so I worked like crazy until the beginning of November getting a finished version I could show,” Eads said. “The whole time I was in collaboration with Cassie. I started in August, by the end of November I was editing and by December had a full vocal score and orchestral score and we started rehearsals in February. The combined effect was kind of colossal.”

To help visualize his efforts, Eads started watching the television series “Deadwood,” which tells the story of the fictional city of Deadwood, S.D., and how it grew from a railroad camp to a pioneer town. “That gave me the kind of character sketch of the types of people that Cassie may have been writing about. Anytime I had questions, I called Cassie. She was huge wealth of information.”

Musically, Eads spared nothing on the performers, opting for big orchestral pieces requiring big performances. “I figured, basically, I was going to be writing in a style of what I consider the whole gold rush effort to be — the westward dream of moving North. I’m honestly overwhelmed by the opportunity to do this with the fabulous musicians who are putting so much into it. It’s a phenomenal honor.”

With Eads and Tilly in collaboration on the music and libretto, the next step was finding the right director. For that, Eads reached out to Cindy Oxberry of New York, who he knew through their experiences together during the Fairbanks Summer Arts Festival.

Oxberry told Eads he had to convince Opera Fairbanks to let her do it, and when she got the phone call offering the job, she took it.

“Emerson and I have a great relationship, and I had gotten to know him through Festival,” Oxberry said. “He wanted me to come, and I did it for him. And I’m a big history nerd. It was easy for me to get into the history of Fairbanks and do research. I love reading about all of this. When you go in the history books and you can actually read about all these people who your draw as your sources of inspiration, I say yippee.”

Oxberry has a vast background in the world of theater and opera as actor, performer and now director, and she drew on that in assembling a team to recreate the city’s pioneer look on stage. She researched archival records of Fairbanks’ past and created gold rush-era signs and set designs that recreate the vintage look of an early mining community. Even real pioneers of Fairbanks will be involved in the production as part of the set includes images and photos from gold rush days that will be projected onto the stage.

“This is a historical opera about here,” she said. “Who gets to do that? Not many directors get to do that. You’re the first person to put your stamp and image on it and I get to put that on stage, and that’s very exciting.

“I absolutely love what I do,” Oxberry said. “I’m lucky to be able to say that I earn my living doing what I love.”

What: “The Color of Gold”

Where: Pioneer Park Theater in the Centennial Center for the Arts

FYI: The cast boasts more than 50 actors backed up by a 30-piece orchestra.