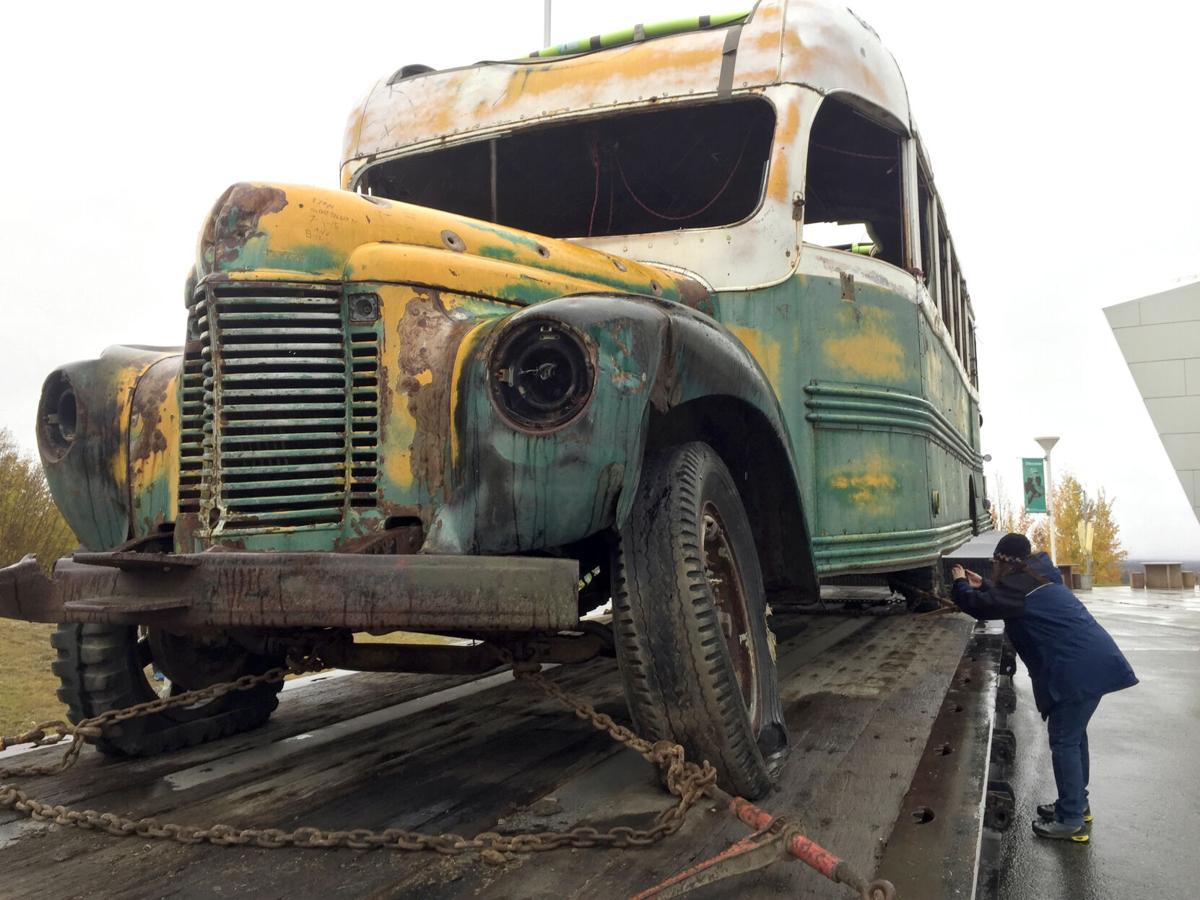 Senior Museum Collections Manager Angela Linn gets her first close-up look at Bus 142. She is responsible for preservation and upcoming display of The Bus. 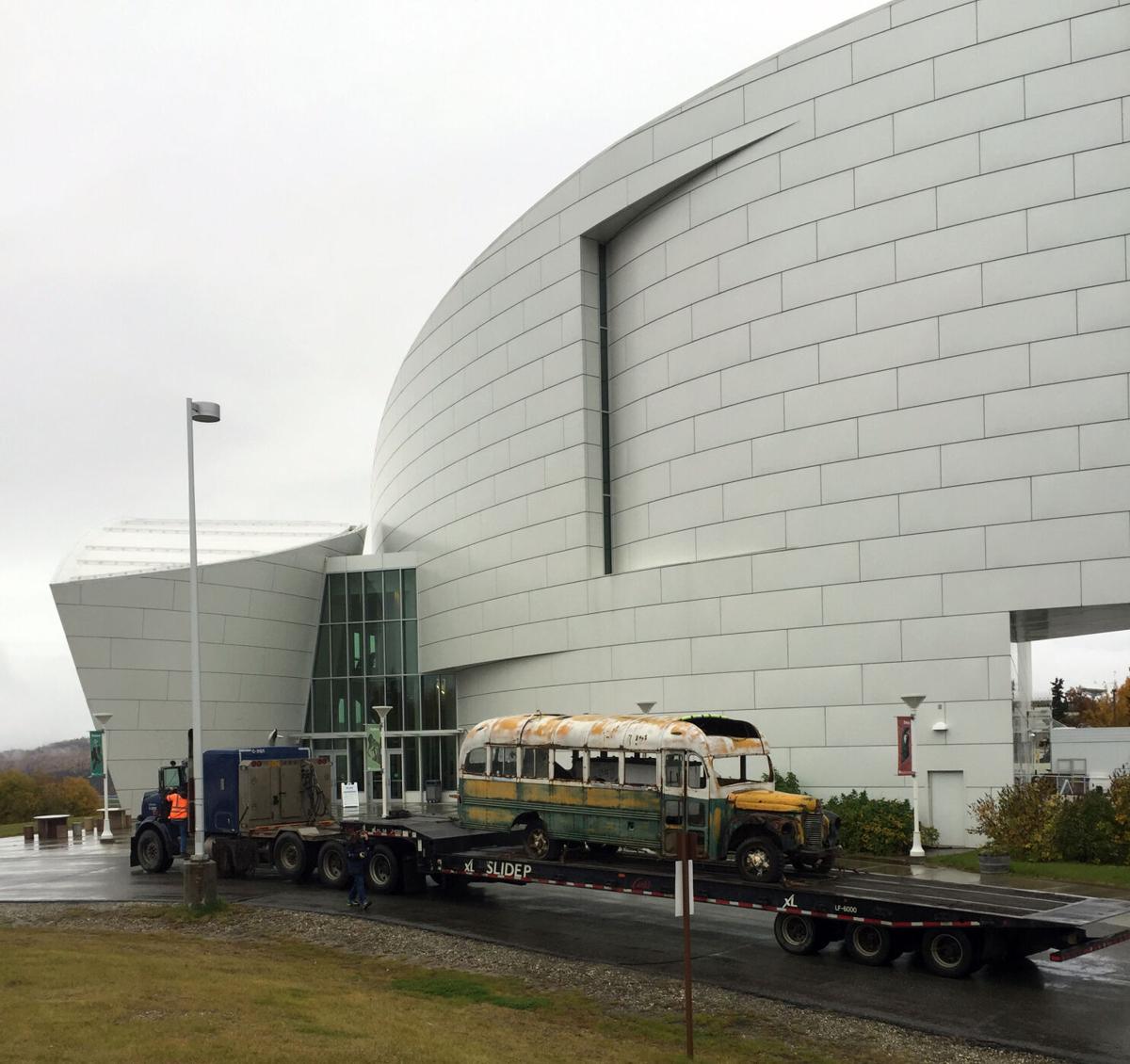 The Into The Wild Bus 142 is back home in Fairbanks at the University of Alaska Museum of the North. 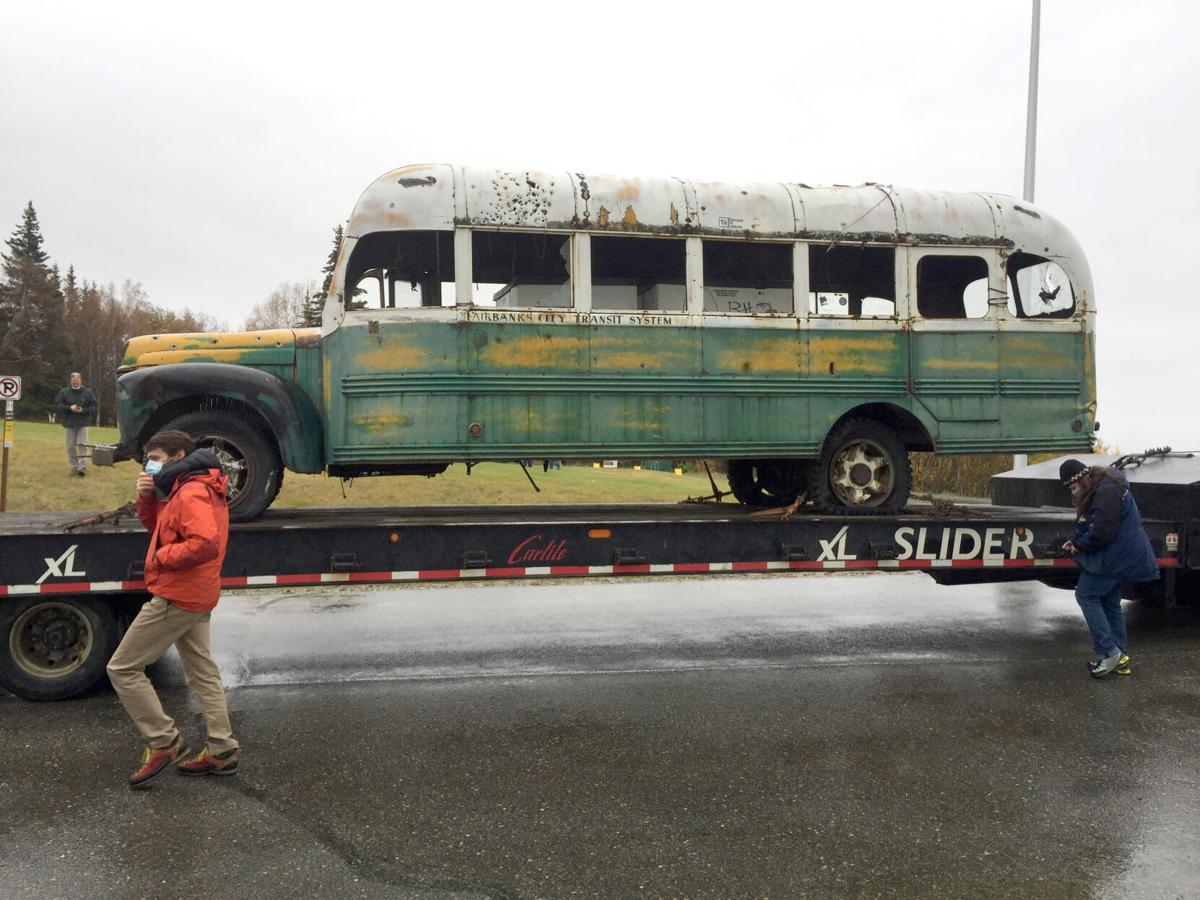 Museum Director Pat Druckenmiller was on site for delivery of Bus 142 to the University of Alaska Museum of the North.

Senior Museum Collections Manager Angela Linn gets her first close-up look at Bus 142. She is responsible for preservation and upcoming display of The Bus.

The Into The Wild Bus 142 is back home in Fairbanks at the University of Alaska Museum of the North.

Museum Director Pat Druckenmiller was on site for delivery of Bus 142 to the University of Alaska Museum of the North.

Preliminary work began last week on a project to create a museum exhibit featuring the old bus where the central character in the book and movie “Into the Wild” spent his last days. The rusty relic was airlifted out of a remote spot off the Stampede Trail last year and brought back to Fairbanks, where it had been used decades ago as a city transit bus. And now, University of Alaska Museum of the North staff are planning a new outdoor exhibit that will tell the story of how Bus 142 became an American cultural icon.

“It provides a whole bunch of challenges,” Howard said. “I mean, she’s really dirty, and she needs a lot of work.”

He and his colleague, Aaron Warkinton, met with museum staff last Friday after spending a couple of days examining the old rig as part of their assessment on what’s needed to keep it from further deteriorating, and make it presentable to the public.

Those stories are told in part through the rust and chipping paint typically found on a 75-year-old vehicle, especially one that’s been sitting exposed to the elements at a remote site near Denali National Park since it was hauled back into there in 1961. The bus served as a shelter for hunters and hikers, including Christopher McCandless, the hapless wanderer profiled in Jon Krakauer’s account titled “Into the Wild.”

“So we just want to stabilize it, make sure that the corrosion is no longer active,” Howard said. “We want to stabilize flaking paint that’s coming off. There’s stories inside that are falling off the walls, literally.”

Those are the stories told through graffiti that’s been scrawled all over the bus and its few remaining windows. Many were left as an homage to the memory of McCandless, whose body was found in the bus on Sept. 6, 1992 by some moose hunters.

One of the scrawls reads, quote, “Godspeed Chris, and say hi to my mom from me!”

Another reads: “Thanx 4 the inspiration!”

Yet another simply says “He was here!”

“There’s Japanese kanji in there. Russian — people from all over the world have journeyed out there to interact with that relic,” Warkinton said. He says the graffiti attest to the universal appeal of the story of McCandless, a tragic figure who after graduating from college decided to escape society and its materialism and instead find the meaning of life. A search that led him deep in to the wilds of Alaska.

“I think he touched on something that a lot of people struggle with,” he said. “Like I’d mentioned earlier, about dealing with the modern world — it can be so overwhelming!”

Angela Linn, a senior collections manager at the Museum of the North, agrees.

“Y’know this is a story that really resonates with millions of people around the world,” she said. “And whether it’s because of the mystique of Alaska, whether they really identify with Chris McCandless and the transition he maybe was going through himself. That, y’know, people see that in themselves.”

Linn, who’s managing the project, says that’s one of the main reasons why Museum of the North officials believe it’s important to preserve the bus and share its stories with the public.

“We think it’s really important to spend the money and the time and the great amount of effort to bring all those stories together,” she said. “And that’s part of what our job is in museums, is to get people to connect those dots within themselves.”

Linn says it’s cost about $7,000 so far for Howard’s firm to assess the work needed on the bus and estimate how much it’ll cost to do it.

The money was raised through online crowdfunding. And she’s hoping to raise additional money with crowdfunding help from Friends of Bus 142, an online group founded by McCandless’s sister, Carine.

Linn says much of the consulting and planning for the exhibit is being done by a 25-member interpretive team, which includes university faculty and members of the community.

She says if all goes well, the exhibit could be opened in 2023.

Tim Ellis is a reporter and producer with KUAC FM 89.9. This story first aired on KUAC radio and appeared online at KUAC.org.