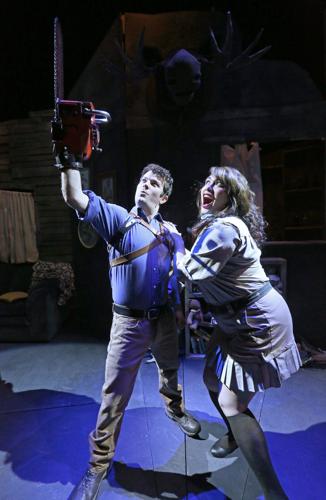 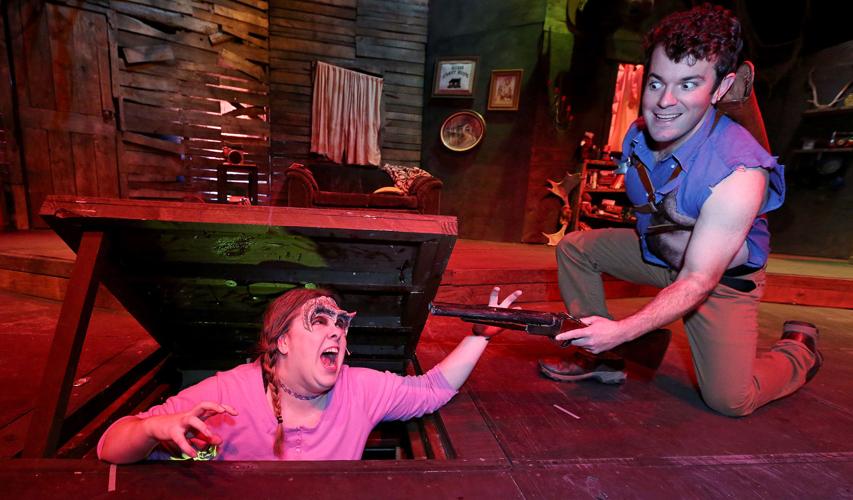 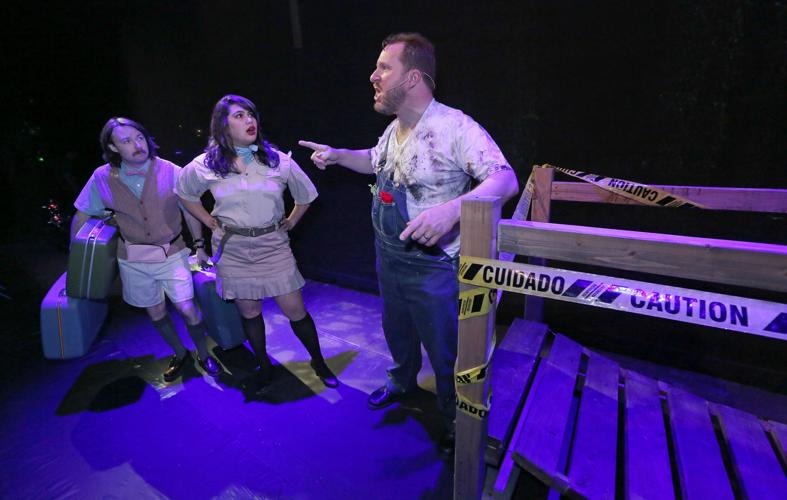 All it takes is some college kids and one book of the dead to really screw things up.

Next thing you know, your friends are possessed, you’re battling an army of Deadites and you’ve got a chainsaw for a hand. Throw in a rock ‘n’ roll score and a blood-soaked audience sitting in the first couple of rows of theater seats, affectionately called “the splatter zone,” and you’ve got the makings of a gory good time.

If any of that sounds familiar (and it should), you know “Evil Dead: The Musical” is bringing to the stage the cult classics of Sam Raimi’s camp trilogy “The Evil Dead,” “Evil Dead II” and “Army of Darkness.” Produced by Interior Independent Theatre and directed by Mary Conlin, the rock musical is making its Alaska premiere in Fairbanks tonight when it opens at Salisbury Theatre at the University of Alaska Fairbanks campus.

“It’s amazingly fun,” Conlin said. “I started working on this in November and had the production team in place and worked all spring and summer and talked ideas. It’s outrageously fun.”

“Evil Dead: The Musical” combines Raimi’s three cult classics into one stage version with hero Ash Williams at center stage battling the undead. In typical horror movie fashion, five friends spending the night at a cabin in the woods stumble upon the Necronomicon, an ancient text of the dead that releases a horde of demons because of course. The original film, 1981’s “The Evil Dead,” presented itself as a somewhat serious horror flick. “Evil Dead II” took a campier route upon its release in 1987, followed by the all-out comedic horror of “Army of Darkness” in 1992. “Evil Dead: The Musical” premiered in 2003 in Toronto, Ontario, and became a near-instant hit among fans of the film series.

Conlin made a pitch to direct the local production as she said she was looking for something new and different.

“The stars kind of aligned with the production team,” she said. “Everyone was itching for something that was technically challenging. That, and it’s an interesting subject matter. It’s bringing in a new audience.”

The production includes what’s called a splatter zone, meaning the first couple of rows get a blood-soaked experience as Ash slays his undead friends.

“A script like this breaks the fourth wall,” she said. “The audience is almost a character, the stage hands are almost a character. It’s almost a satire for musical theater and how silly that can be sometimes, but it’s engaging and gets people involved.

“The cast has been the most wonderful people in the world to work with,” she said. “I like giving guidelines but letting the actors make the characters their own. I’m really lucky. I get to see where it started and where it is now, and to see that growth is incredible.”

The cult status of the series is legendary, turning Bruce Campbell, the actor who portrayed Ash in all three films, into a horror icon himself. Picking up the role of Ash is Sean Roy, a 32-year-old former U.S. Army medic who’s made Fairbanks home. The production is his second in Fairbanks, with Roy making his stage debut in March in Fairbanks Light Opera Theatre After Dark’s production of “Heathers, The Musical” in which he played jock Ram Sweeney. He heard about the musical during the cast party for “Heathers” and knew he wanted to be involved in some way.

“I’m a card-carrying member of the cult,” Roy said of his fandom toward the Raimi movies. “Each of the movies is so different. ‘Evil Dead’ was trying to be horror but it was so low budget it was funny. When Sam Raimi did ‘Evil Dead II,’ he went the other direction. It tickles my funny bone all the way.”

The role is big — it’s the lead, after all — and that’s a little intimidating, Roy said.

“I’m charging forward because it’s been so much fun to practice and rehearse and produce,” he said.

Rounding out the characters is something of an homage to Raimi. Called Fake Shemp, the insider term is one likely known to movie buffs in that it’s a phrase for someone who fills in for main actors and is filmed from the back or maybe only shows a hand or foot on stage. It originates from The Three Stooges era when the actor who portrayed Shemp was suddenly replaced by another actor.

“When Sam Raimi was directing the first ‘Evil Dead,’ Sam’s brother and friends filed in for various scenes, whatever was needed,” said actor Michael Shaeffer, part of the cast. “You need a Fake Shemp.”

Shaeffer appears in the production as a nod to the term, taking on the roles of a crazed moose, a disembodied hand, and even a big boss demon that Ash tackles toward the end of the show.

“Sean captures the smile and charm and chutzpah of Ash, admirably,” Shaeffer said. “I wanted to work with this show in some capacity, either on stage or backstage or with the effects. You’ll be hungry for more Shemp.”

Shaeffer, also no stranger to the stage as either actor or director, gave the production high marks.

“I’m thrilled with Mary and the show and how it’s cast,” he said. “I would encourage audiences who aren’t offended by wonderfully inappropriate lyrics and lots of fake blood to come to Salisbury and check it out.”

Contact Features Editor Gary Black at 459-7504 or at twitter.com/FDNMfeatures.

Tickets: Available online at Brown Paper Tickets or at the door; tickets range $20-$30.

FYI: Should be considered rated R for language, gore and some sexuality.