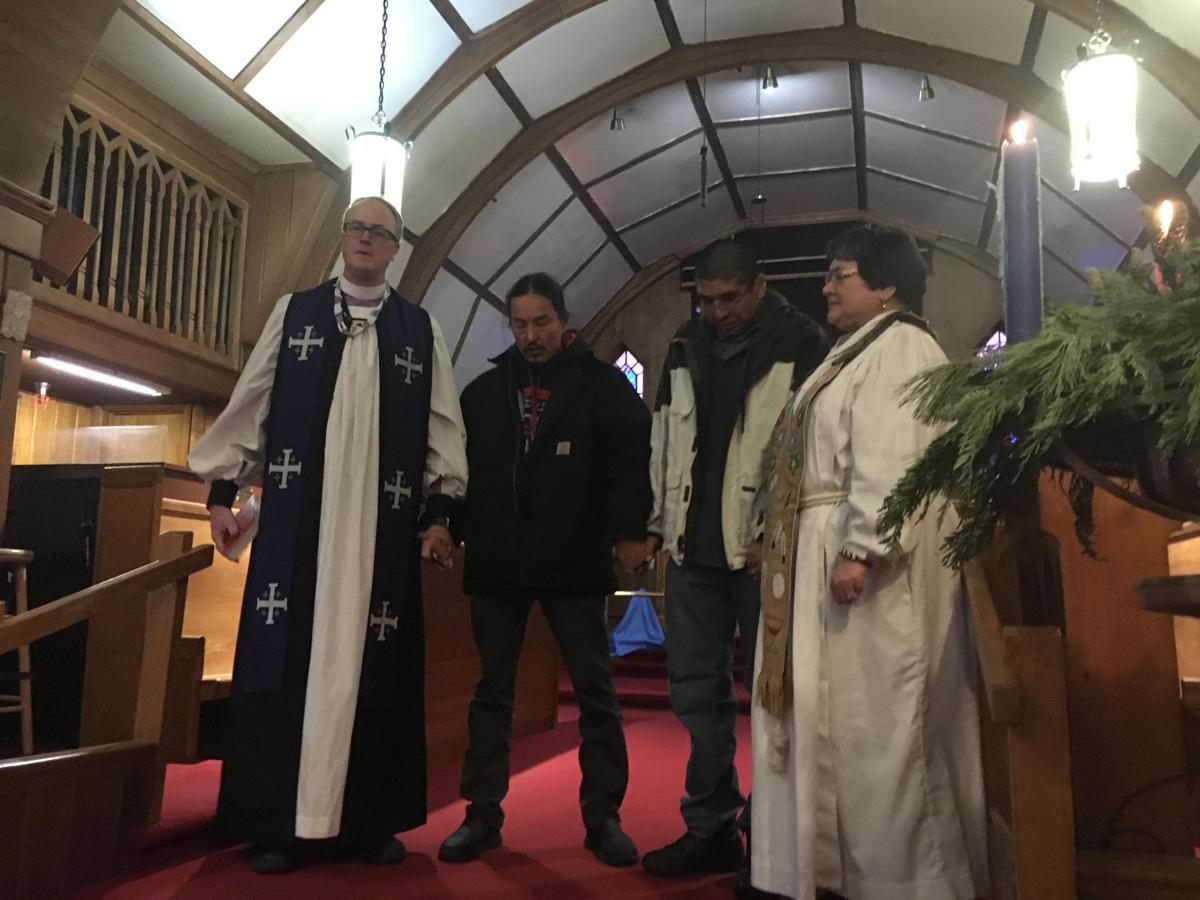 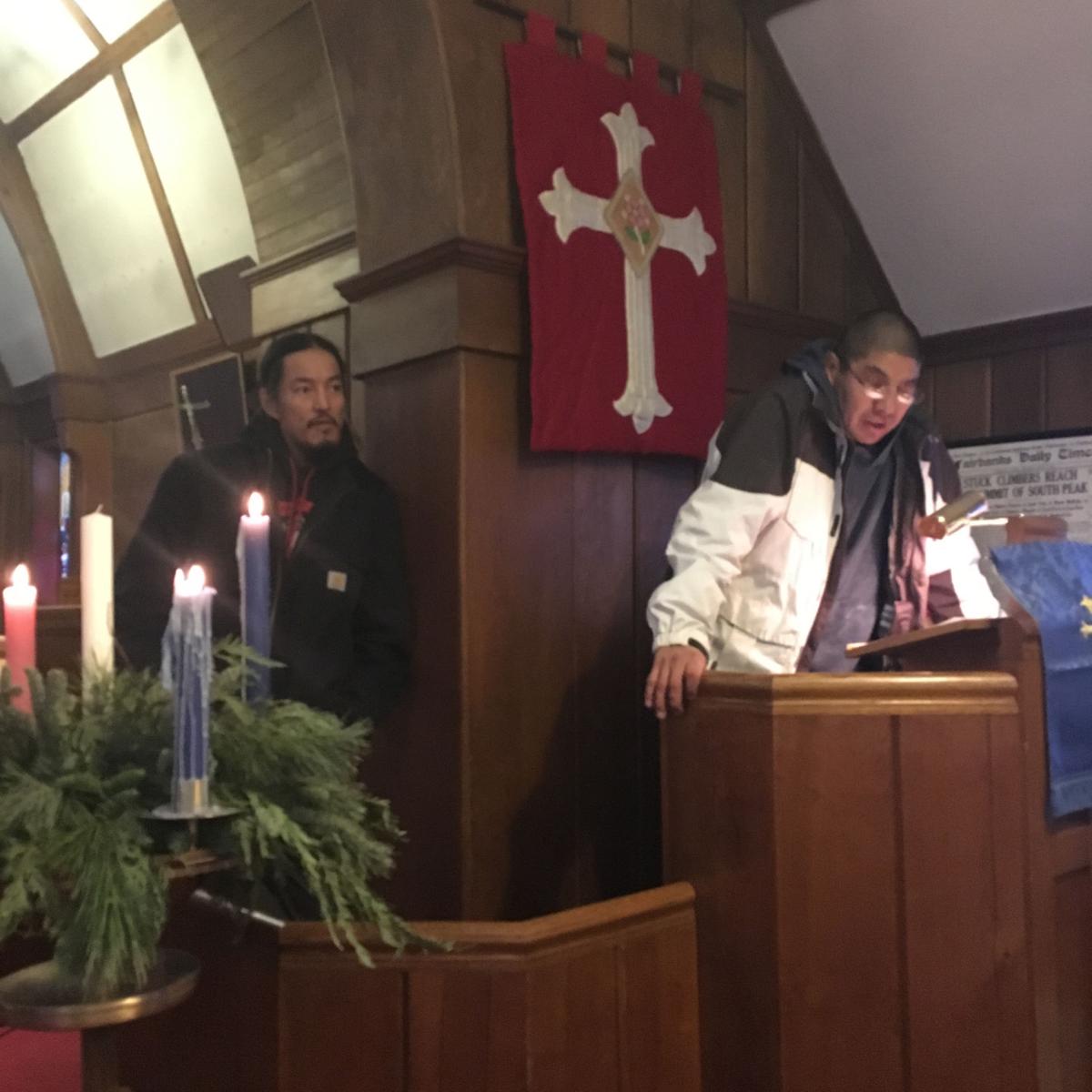 FAIRBANKS — It’s been a year of beauty and sorrow for two members of the Fairbanks Four, who spoke Sunday at St. Matthew’s Episcopal Church during a “Service of Thanksgiving” marking the one-year anniversary of their release from prison.

“So many beautiful things have happened,” George Frese said before about 45 people in the church sanctuary. “Oprah Winfrey says they are whispers from God, right?”

Frese and fellow speaker Eugene Vent spent most of their adult lives behind bars after juries convicted them — along with Marvin Roberts and Kevin Pease — of the murder of John Hartman, a teenage boy who was brutally beaten, sexually assaulted and left to die on a Fairbanks city street Oct. 11, 1997.

The two men, along with Pease, won their release Dec. 17, 2015, after their cases were picked up by the Alaska Innocence Project. Roberts was released on parole 18 months prior.

The 39-year-old Frese covered a lot of ground, reflecting on life in prison, his faith and the challenges of starting over.

He expressed gratitude toward those who believed in his innocence and pressed for his release.

“We never knew how many were fighting and praying for us,” he said. “That is very humbling.”

Frese said he gets recognized almost everywhere he goes.

“Living in the spotlight — it gets tiring,” he said.

He learned to read people’s faces and body language as a coping mechanism in prison. The habit has continued outside of prison, he said.

Frese sees love in the eyes of strangers, he said, but he has also looked into people’s eyes and seen doubt — “I wonder if he did it?” — as well as pity, which he said can be difficult for a man to accept.

He alluded to complications reintegrating with society after spending 18 years incarcerated. People who Frese knew 18 years ago are different now, he said.

“It’s crazy living out here,” he said. “You don’t really know your family anymore. They are not the same.”

Frese said he sometimes thinks about all that he lost. He said he tries not to dwell on it.

“You do feel alone but you also feel grateful,” he said.

He challenged the audience to open their hearts to others.

“We are all connected. We are all one,” he said. “We are not better than each other.”

While Frese spoke at length, Vent’s remarks were comparably brief.

The 37-year-old is figuring out what he wants to do with the rest of his life and is looking for work, he said.

Vent said he  has been spending time in rural Alaska where he enjoys practicing subsistence living, he said.

Perdue was dropped off at Fairbanks Memorial Hospital last week with multiple gunshot wounds. He is recovering, according to Frese, who visited him in the hospital Saturday and said “He looks good.”

Vent said the tragedies this winter have been “overwhelming.”

He said he faces obstacles daily as he continues to rebuild his life but is glad to be near family.

“There has been a lot of real life drama that has been going on,” Vent said. “Just having to experience it with your family is a pretty good feeling.”

Like Frese, he expressed gratitude to those who supported the Fairbanks Four.

“Thank you so much for having our back,” he said. “I will never forget that.”

The Rev. Shirley Lee led a sermon, calling for reform for Alaska’s criminal justice system and for compensation for the Fairbanks Four. The men agreed not to sue for wrongful conviction or imprisonment as a term of their release.

Lee is the chairwoman of the Tanana Chiefs Conference justice task force.

“There is still work to do,” she said. “There does need to be reform in our system. We can use our voices still and take action.”