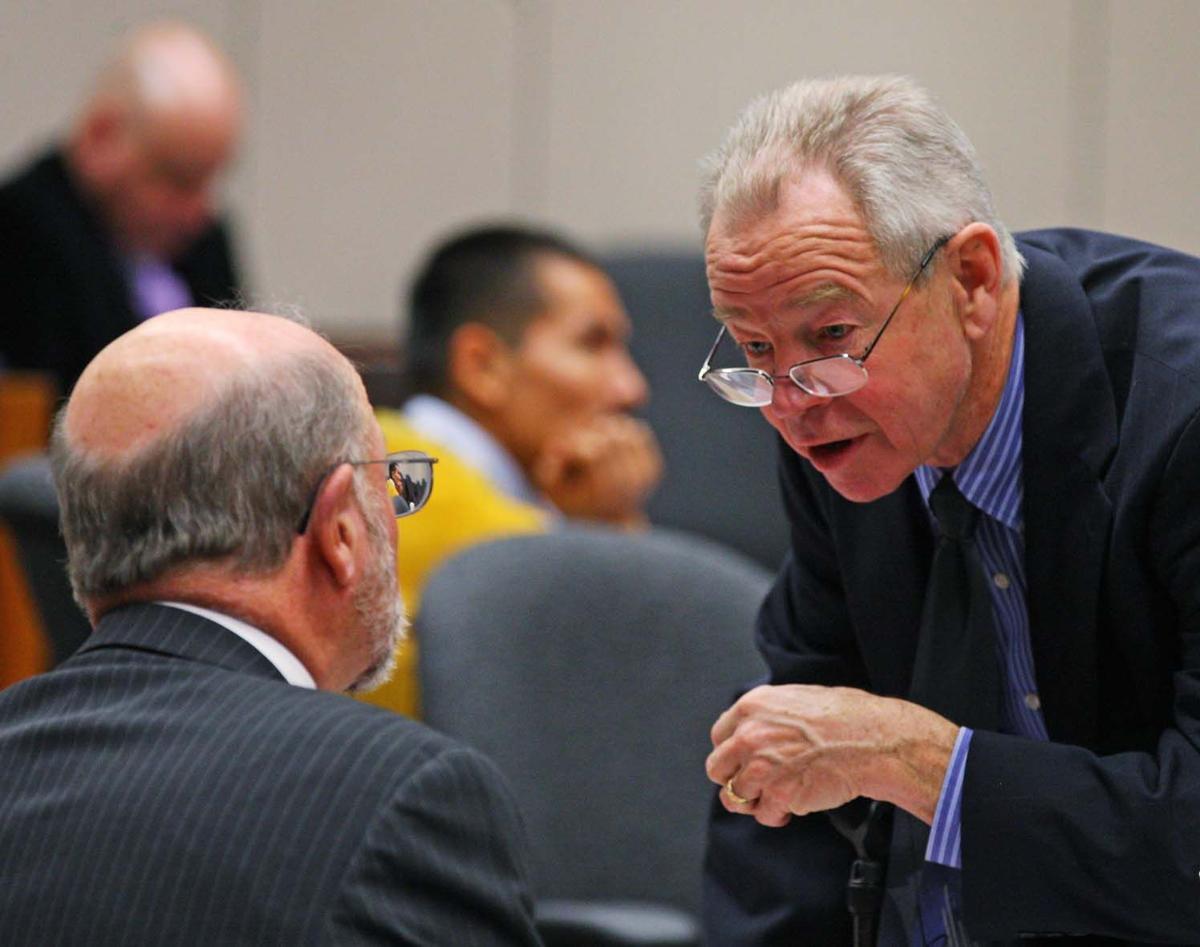 Alaska Innocence Project Executive Director Bill Oberly, right, covers the microphone while conversing with Petitioning Attorney Bob Bundy, left, during an evidentiary hearing for the Fairbanks Four to try to prove their innocence Monday morning, October 12, 2015 at the Rabinowitz Courthouse. The Four, George Frese, Kevin Pease, Eugene Vent and Marvin Roberts were convicted in the killing of 15-year old John Hartman 18 years ago. Roberts was released on parole this summer, the other three men remain in jail. 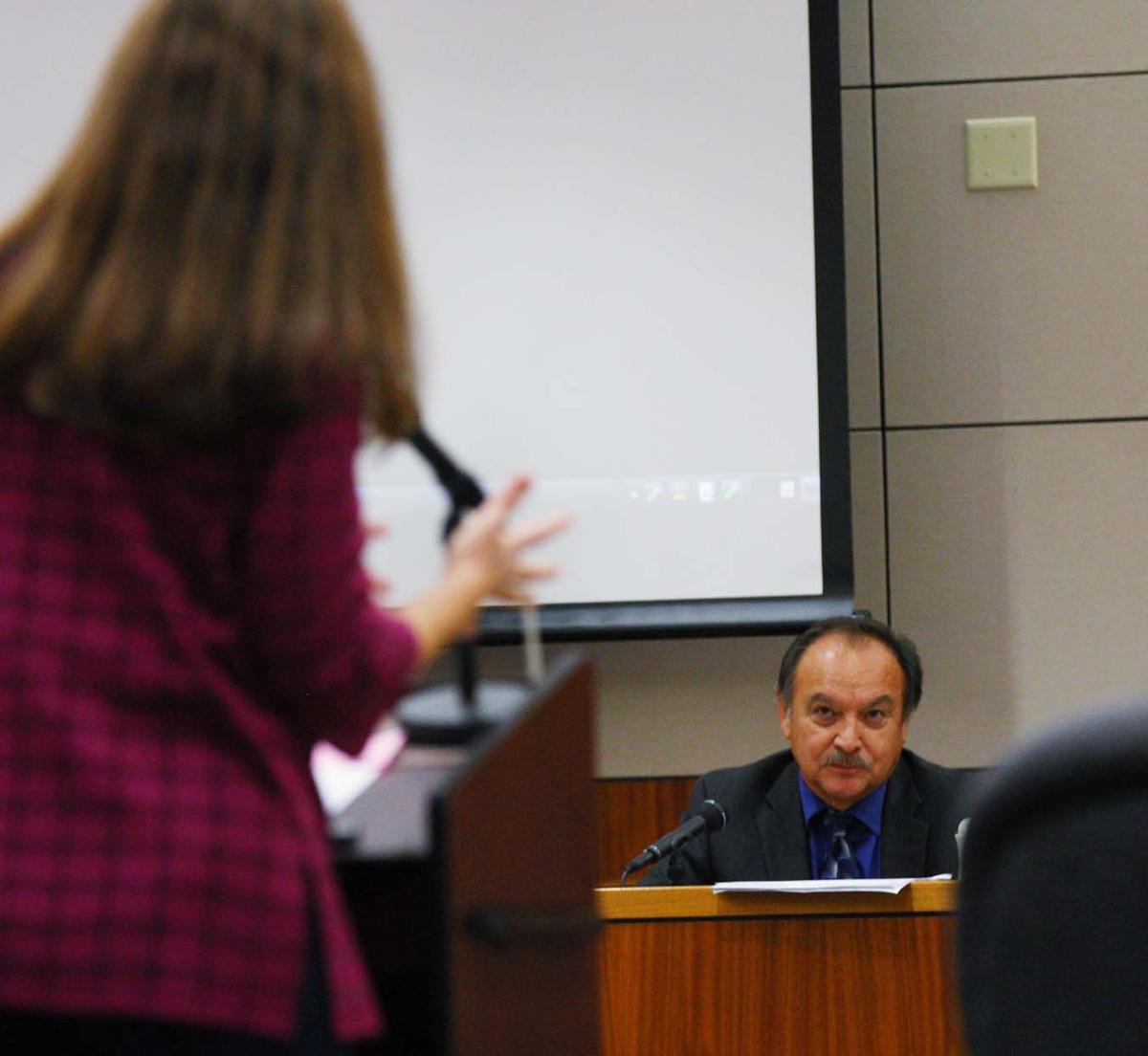 State Assistant Attorney General Adrianne Bachman, left, questions Investigator James Gallen during an evidentiary hearing for the Fairbanks Four to try to prove their innocence Monday morning, October 12, 2015 at the Rabinowitz Courthouse. The Four, George Frese, Kevin Pease, Eugene Vent and Marvin Roberts were convicted in the killing of 15-year old John Hartman 18 years ago. Roberts was released on parole this summer, the other three men remain in jail.

Alaska Innocence Project Executive Director Bill Oberly, right, covers the microphone while conversing with Petitioning Attorney Bob Bundy, left, during an evidentiary hearing for the Fairbanks Four to try to prove their innocence Monday morning, October 12, 2015 at the Rabinowitz Courthouse. The Four, George Frese, Kevin Pease, Eugene Vent and Marvin Roberts were convicted in the killing of 15-year old John Hartman 18 years ago. Roberts was released on parole this summer, the other three men remain in jail.

State Assistant Attorney General Adrianne Bachman, left, questions Investigator James Gallen during an evidentiary hearing for the Fairbanks Four to try to prove their innocence Monday morning, October 12, 2015 at the Rabinowitz Courthouse. The Four, George Frese, Kevin Pease, Eugene Vent and Marvin Roberts were convicted in the killing of 15-year old John Hartman 18 years ago. Roberts was released on parole this summer, the other three men remain in jail.

FAIRBANKS — Two Alaska cold-case investigators made it clear Monday that they don’t stand behind the original police work that led to murder convictions of the young men known as the “Fairbanks Four.”

Despite the fact that both worked directly under prosecutor Adrienne Bachman as they studied the 1997 John Hartman case between October 2013 and January 2015, the two investigators didn’t back up the narrative Bachman made in her opening statement.

Instead, both accused Bachman of withholding documents from their investigation. In addition, McPherron, the lead investigator, testified that he was taken off the case in January 2015 before he felt it was complete.

Last week, Bachman said in opening statements that this four-week hearing will re-affirm the convictions of Frese, Pease, Roberts and Vent in the 1997 murder of John Hartman. In their post-conviction relief case, a civil lawsuit, the men are seeking a court declaration of “actual innocence.” Frese, Pease and Vent seek immediate release from prison. Roberts is already out after making parole this summer. The case is before Superior Court Judge Lyle on the fifth floor of the Rabinowitz Courthouse.

Monday’s testimony cast doubt on how much Bachman will be able to use evidence from the two investigators in the state’s case. Under cross-examination from Bachman on Monday, Gallen quarreled with Bachman’s questions about their joint investigation. McPherron is scheduled to be cross-examined today.

The two investigators came just short of taking sides in the case.

In Gallen’s case, Bachman raised a legal objection, sustained by Superior Court Judge Paul Lyle, when he was asked if he thinks the four convicted men are responsible for Hartman’s killing.

Frese’s attorney, Jahna Lindemuth, asked a slightly different question with McPherron on the witness stand later in the day Monday.

“In your investigation, did you find any evidence that Mr. Pease, Mr. Frese, Mr. Roberts and Mr. Vent were at the corner of Ninth and Barnette when John Hartman was assaulted and murdered?” she asked.

The two men testified all day on Monday except for an 1 1/2 hour confidential hearing after lunch about an undisclosed topic.

Gallen and McPherron are both longtime Alaska State Troopers who worked for the now-defunct cold case unit. That police unit investigated old cases that didn’t have active leads, often old unsolved homicides. The unit was disbanded in July for budgetary reasons. Like other state departments,  the Alaska Department of Public Safety was asked to make cuts this year as a massive decrease to oil prices hit state oil tax revenue.

Today McPherron is a temporary employee for the troopers. He is filling in for another employee who is out on leave. Gallen no longer works for the state. The two men began investigating the Hartman murder in October 2013. McPherron said Monday that he first met with the petitioners’ attorneys alone, not accompanied by a state attorney, after the cold case unit was disbanded in July.

Weeks before they were assigned the case, attorneys for Pease, Frese, Roberts and Vent held a press conference outside the Rabinowitz Courthouse to announce they were filling a fresh appeal in the case. In addition to questioning the fairness of their original jury trials, the men, known by supporters as the Fairbanks Four, provided an alternate theory for Hartman’s death. Their case named William Holmes, Jason Wallace, Rashan Brown, Shelmar Johnson and Marquez Pennington as Hartman’s killers. It’s based largely on a jailhouse confession from Holmes and a series of potential collaborating accounts. Three of the five men, Holmes, Wallace and Brown, are already in jail for other murders committed after 1997.

Gallen and McPherron estimated they spent about 90 percent of their work hours on the Hartman case between October 2013 and January 2015. They read hundreds of pages of police records and trial transcripts and interviewed about 50 people, they said.

One of the first things they did was to travel to Fairbanks in October with Bachman.

One October night in 2013, Bachman and the cold case investigators recreated what’s now a famous eyewitness testimony experiment in the case. After dark, Gallen said he and Bachman stood near the Fairbanks Eagles Hall on First Avenue while McPherron paced out the approximate distance of the eyewitness identification used in the case, about 500 feet. Bachman and Gallen had different memories of how their field test played out.

Gallen said he remembered that McPherron was reduced to a “silhouette” and that even colors of cars were difficult to a make out at a distance. Dark cars looked black and light cars took on the color of the street lamps, he said.

Bachman pressed him on cross examination if he remembered “the white face” and “what was described as the Charlie Chaplin walk” at 500 feet.

“I saw the white face, yes,” McPherron said. “We never lost contact with Mr. McPherron — investigator McPherron — so we knew who he was. I’m describing, once he’s standing upright, you could not see him.”

Gallen then added what he said Bachman said during their field test.

In the original jury trials, prosecutors used an eyewitness identification by a man named Arlo Olson to argue that Pease, Frese, Roberts and Vent were seen together on First Avenue, where they robbed and beat up a man before going on to fatally beat Hartman on Barnette Street. The four were convicted of the assault of the man, Frank Dayton, in addition to the Hartman murder.

In an earlier appeal in this case, trial judge Ben Esch threw out Pease’s convictions based on an Anchorage jury’s decision to test their own eyewitness identification skills on a sunny Anchorage afternoon. The Alaska Court of Appeals reversed his ruling.

The Fairbanks police department’s inaction on Holmes’ self-incriminating statements has been a particularly contentious issue so far in the hearing.

The general public found out about Holmes alleged role in the Hartman murder in September 2013. But officers at the Fairbanks police department knew about it in December 2011, when Holmes talked about the Hartman case with California prison guard Joseph Torquato. Torquato spoke with his supervisor and had a memo about it faxed to Fairbanks police.

In a side issue that’s still pending before Lyle, Vent alleges prosecutors failure to tell the petitioners about the Holme’s statement amount’s to “prosecutorial misconduct” because prosecutors have an obligation to divulge exculpatory evidence.

The cold case investigators discovered the Torquato memo in January 2014 while reviewing files at the Fairbanks police department. Both Gallen and McPherron testified Monday that they thought the memo was significant. Both said Bachman “refused” to share Alaska Department of Law emails that showed the digital paper trail of the Torquato memo.

An initial confession from Vent was another key piece of evidence used in the jury trials. Supporters of the plaintiffs have long argued his statement was a false confession, the result of being young, drunk and under heavy pressure from police. Vent recanted his statement and pleaded not guilty at his first court hearings.

In his investigation, Gallen compared a transcript of Vent’s police interview with a recording during his investigation. He said he marked up corrections with a red felt-tipped pen. On Monday, Lyle told prosecutors to produce this copy for the petitioners. They haven’t previously received it, Lindemuth said.

If he had been in Ring’s shoes, he would have done the questioning “very differently,” first  letting Vent sleep off his alcohol before questioning him. Putting pressure on an intoxicated witness is “risky” because it’s likely to yield unreliable information, McPherron said.

Lindemuth asked him if there was “any fact that Vent stated that only the person who committed the homicide would know about?”

“No,” McPherron said. “It was just basically some vague admissions about being in a fight or an altercation or something.”

Key details related to the Hartman killing came from Ring in the interview, not Vent, McPherron said.

Earlier in his testimony, McPherron was asked why he thought his investigation was terminated in January, 2015. Lyle cut off this question based on objection from Bachman that the answer wasn’t relevant and because McPherron didn’t have personal knowledge of why the investigation ended.

McPherron was allowed to answer a question about whether the investigation ended too soon. Yes, he said, in part because he never got to interview Ring about his original investigation.

The case continues this morning with McPherron scheduled to resume his testimony. The hearing is expected to continue through Oct. 30.