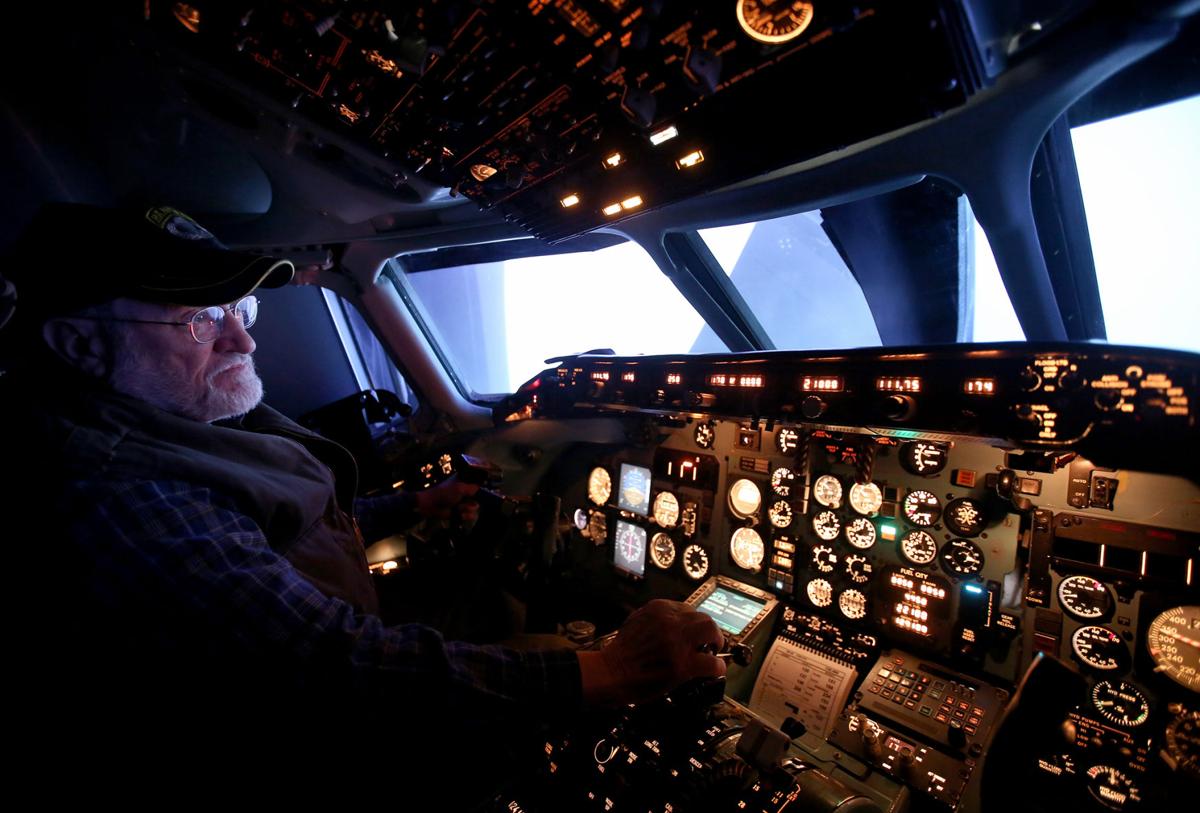 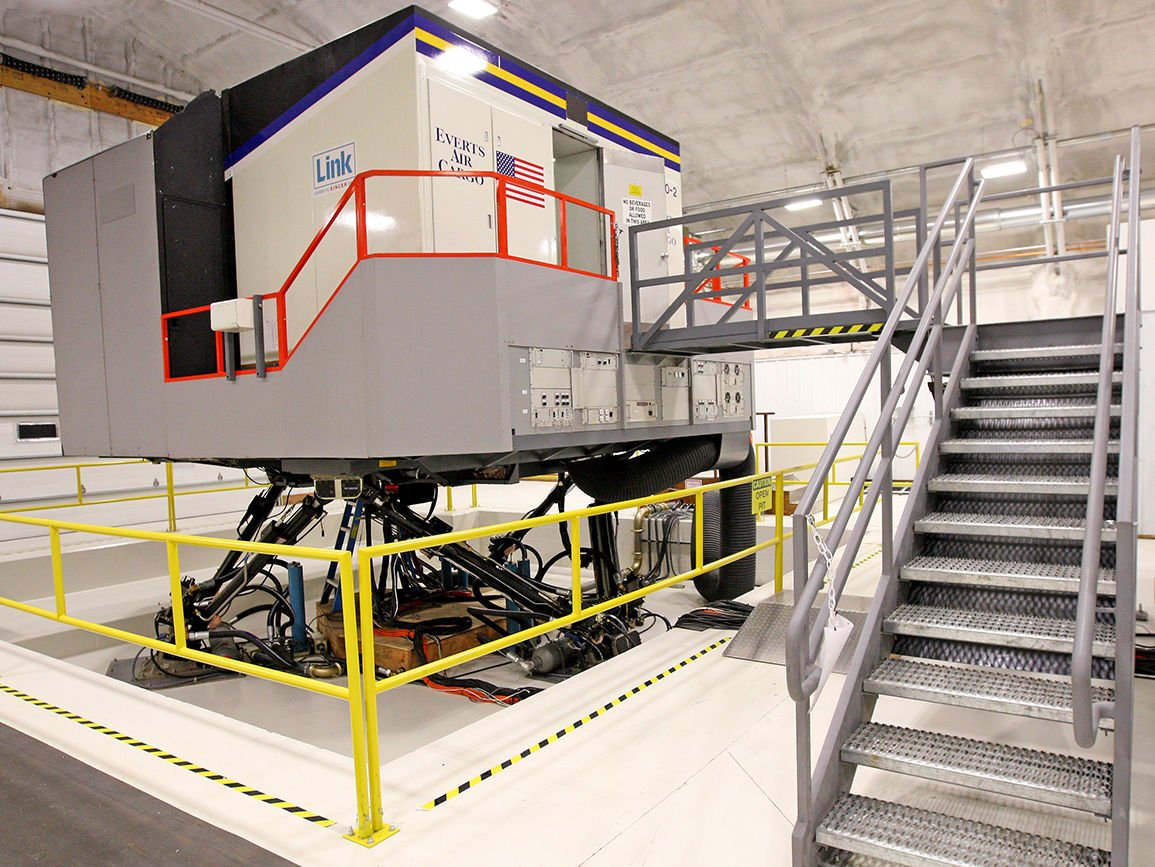 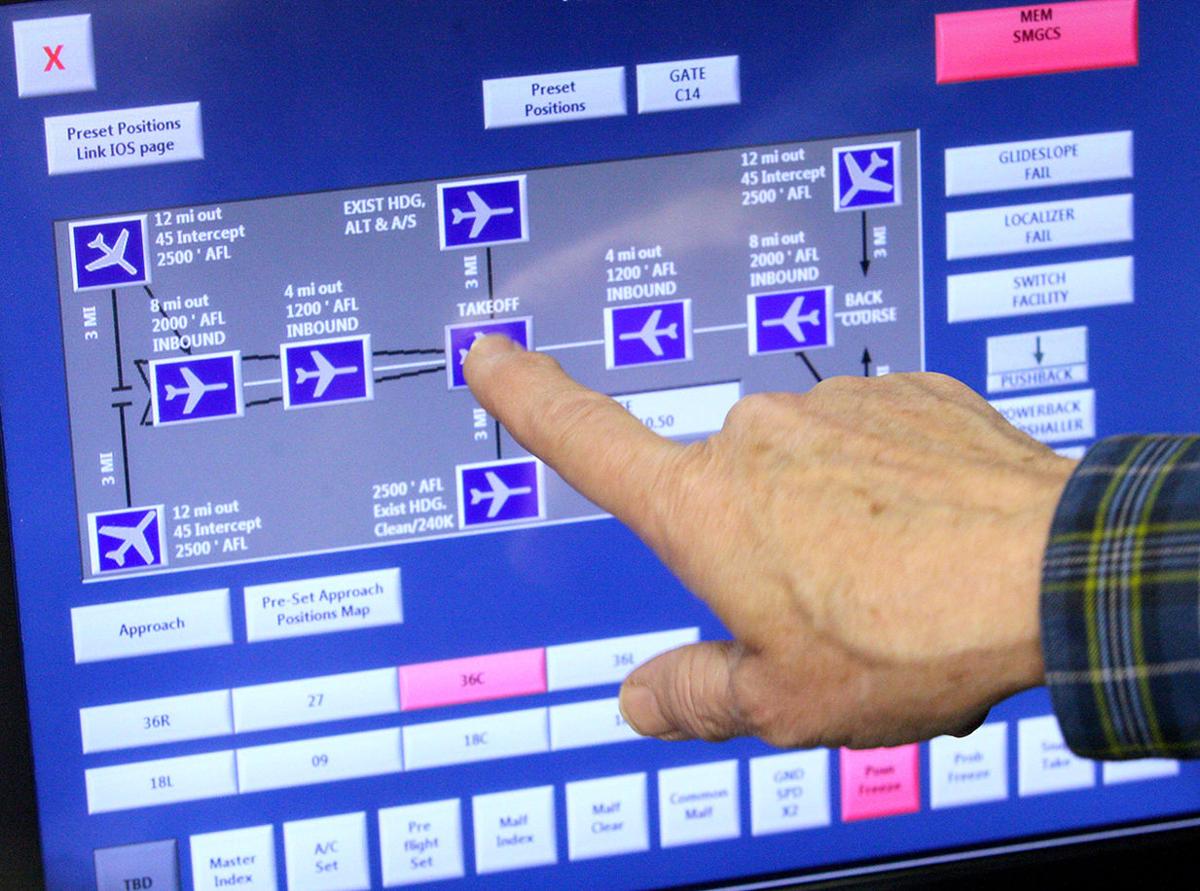 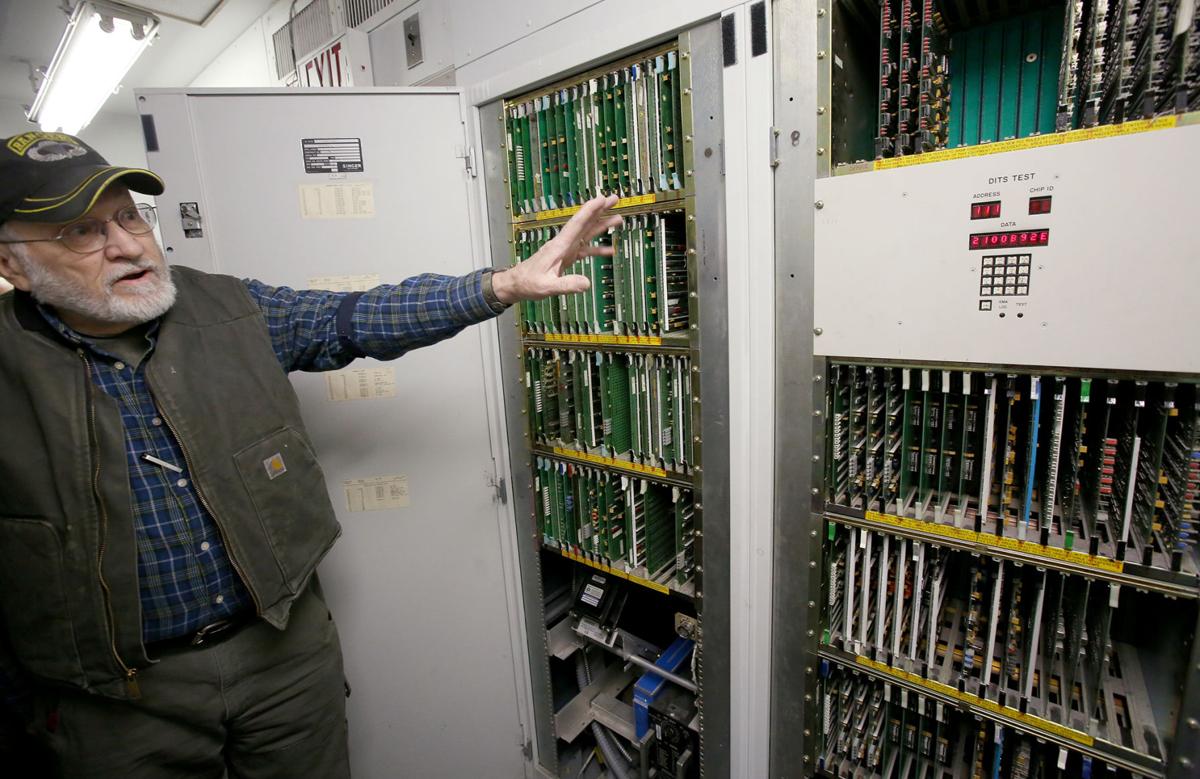 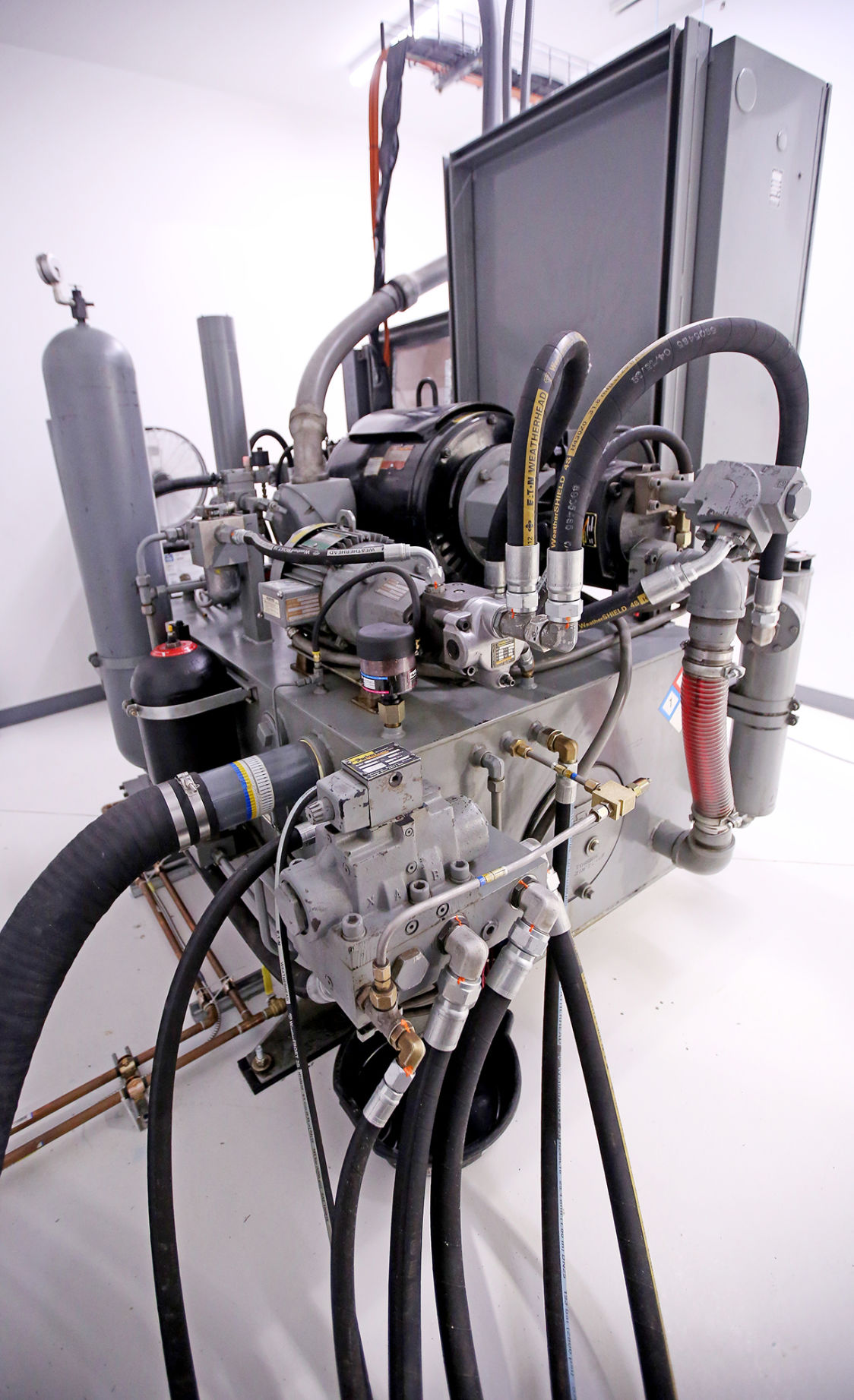 From the cockpit of the MD-80, the runway at Memphis International Airport vanishes as the nose lifts into the virtual clouds. Dozens of dials, switches and levers surround me as I sit in the pilot’s seat and struggle to keep the nose of the big plane level. An alert sounds, loudly. I’ve overshot my cruising altitude.

Robert Everts, sitting in the co-pilot seat, and Jim Turner, who’s in the instructor’s seat, laugh. Then they take control, flip a few switches, turn a few knobs and a few seconds later, we’ve glided to a smooth halt, back on the virtual Memphis runway.

We’re sitting in an actual MD-80 cockpit, but the cockpit is located in a Fairbanks warehouse. It’s the heart of a flight simulator that Everts Air Cargo acquired a year ago from American Airlines. This November, the Federal Aviation Administration certified it for training after two days of testing and evaluation, said Everts, the airline’s owner and operator.

“We determined it would be more effective to have our own training done here,” Everts said. “It greatly expands our training efforts.”

In past years, Everts pilots would travel to facilities in the Lower 48 for training. That would entail two travel days in addition to two four-hour training sessions, but the Everts pilots would frequently find they had been assigned slots between 11 p.m. and 3 a.m. “We don’t schedule our pilots to fly like that,” he said, so training like that was less than ideal.

When American Airlines changed its fleet a few years ago, the simulator became available and Everts brought it to Fairbanks.

The airline has its roots as Tatonduk Flying Service, which was established in Eagle in 1978. Tatonduk Outfitters Limited is the parent company for Everts Air Alaska, which provides cargo and passenger service in Interior Alaska; and Everts Air Cargo, formed in 1995, which provides charter and scheduled freight service to communities around the state, as well as charters in the Lower 48. Everts employs about 60 pilots and has a varied fleet, which includes DC-6, DC-9 and MD-80 aircraft, among others.

In general, Everts said, the jets do all the pavement runways and the DC-6s do all the gravel, such as remote operations and gold fields.

A DC-6 flight simulator is housed next to the new MD-80 simulator.

“For a privately held company in Fairbanks in the middle of Alaska it’s quite unique,” Everts said. “It allows us to monitor progress closely in our own back yard.”

The MD-80 simulator looks like a large box mounted on hydraulic lifts in the middle of a climate-controlled warehouse. The hydraulics allow the simulator to mimic real-life conditions such as the G-loading, or gravitional forces, a pilot would feel during takeoffs, landings or turns. The cockpit in the simulator is an actual MD-80 cockpit, said Turner, air carrier resource and development manager for Everts Air Cargo.

“When you’re sitting at the controls you get so involved you forget it’s not the real thing,” Turner said.

Three airports, Memphis International in Tennessee, John F. Kennedy in New York, and Salt Lake City, are programmed into the simulator. These are used by the FAA to train for specific operations such as taxi operations, wind conditions or low visibility. Turner said they also can program in the runway specs for Alaska airports, with a priority for places such as Deadhorse, Anchorage and Southeast Alaska towns, which can pose problems due to  wind and weather.

“Wind shear has killed a lot of people over the years,” Turner said. “We can duplicate the actual weather conditions from these accidents and train pilots on how to react and overcome them.”

For Alaska pilots, weather and runway conditions are usually the biggest obstacles. Everts said the simulator can be programmed to mimic low visibility, high winds and snow-covered or bumpy landing surfaces, all of which an Alaskan-based pilot can expect. In addition, the simulator can duplicate any failures an airplane might have, such as an engine fire or mechanical problem.

“We can plug the wind in any speed and direction. Rain, sleet, snow,” Turner said. “We can make it perfect or we can make it as ugly as anything we can hope the guys never have to see.

A climate-controlled room to the side holds a bank of high-powered computers that maintenance team leader Mike Heit has dubbed “The Beast.” A room next door, much warmer and louder, holds the hydraulics.

And, just like an airplane, the simulator also needs regular maintenance.

“A lot goes into this beast,” Turner said. “There’s a lot of different pieces to make this thing work.”

Everts said moving the 20,000-pound simulator from Dallas to Fairbanks required removing an entire concrete wall so it could be moved to a truck, then a train to Seattle, a barge to the Port of Anchorage and another truck to Fairbanks. It took nearly a year to put it back together, test it and obtain the FAA qualification rating. Pilots will begin using it in early December, Turner said.

Everts wouldn’t say how much it cost, but said “it’s a lot of money. It’s a long-term investment, but because of our location in Alaska, having this kind of training device in our backyard will pay dividends much sooner than later.”

According to FAA regulations, a co-pilot on a commercial passenger or cargo plane must hold an Airline Transport Pilot certificate, which requires 1,500 hours as a pilot. To move over to the captain’s seat, the pilot must have the ATP and the skills, ability and judgment to operate the plane safety, Turner said. Training is key.

“There are no do-overs in airplanes,” Everts said. “You either get it or you don’t, but in the simulator you get to do do-overs.”