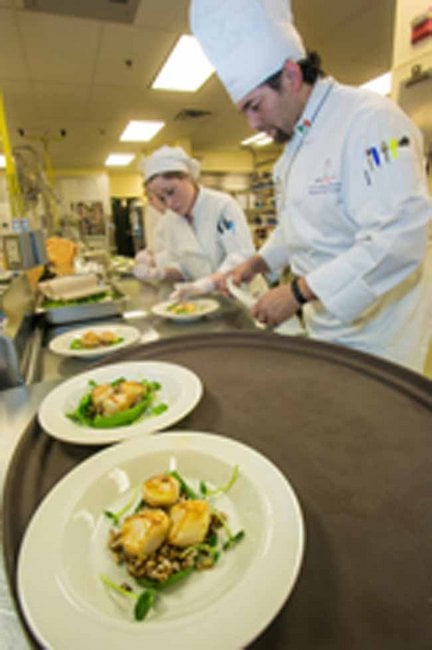 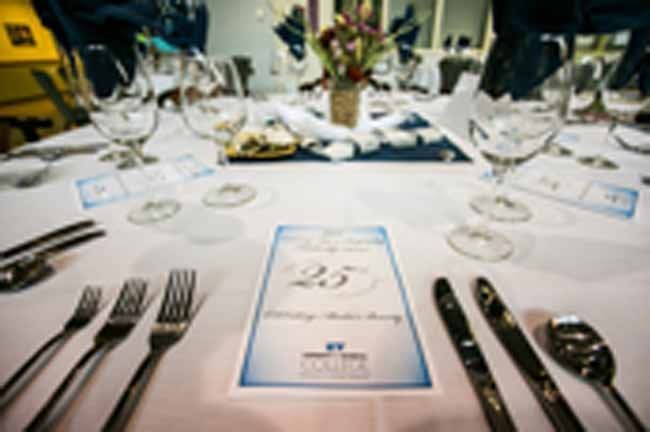 FAIRBANKS - Chef Michael Roddey wasn’t sure what to expect when he went courting Alaska farmers and producers about food for the scholarship dinner of the culinary program at the University of Alaska Fairbanks Community and Technical College.

No one dreamed the response would be so great that he was able to assemble a dinner consisting almost exclusively of Alaska-grown food. In springtime, no less, when harvests are a long way off.

But that is exactly what happened April 28 at Hutchison High School. CTC culinary students had been working hard all week to prepare the eight-course meal, and they served the dinner with style and grace to the fundraiser’s 120 attendees.

“We wanted to move to a sustainable menu,” Roddey said. “We were looking to lower our carbon footprint and procure products from as close to home as possible and give back to the local effort.

“Once we jumped into this head first we found a lot of folks have great things going on here.”

“I was excited and the farmers were excited,” Roddey said. “It just grew. Everyone recommended others to call. It was an exciting process. It shows how we can work together to collaborate and support one another.”

“We are celebrating Alaska’s bounty,” Roddey told the audience.

The local eggs were pickled in spearmint tea and accented with microgreens and tomato salt. The scallops, prepared in a seafood broth accented with saffron, were plated with barley pearls, spinach and sunflower sprouts. The charcuterie was made from lamb and pork donated by Jerry Marlow. The Alaska cod was bedded on basil mashed potatoes and topped with fried organic onions.

Perhaps the most controversial item served was the green frappé. Containing apples, ginger, cucumbers, banana, lime, cilantro, wheat grass and spinach, the healthy drink served as the interlude between main courses. “Try it before you turn your nose up at it,” Roddey encouraged the diners.

The reindeer, raised at the Fairbanks Experiment Farm at UAF and made available through Homegrown Market, was accompanied by barley flour pasta, herbs, chopped spinach, basil and arugula microgreens.

Roddey and his team have been leaning toward more sustainable menus for the past three years. Students watched the documentary “Fresh,” and composting has become a standard practice in the school kitchen. Everyone is encouraged to bring their own cups for beverages, and the kitchen uses biodegradable towels. The student club has been helping Calypso Farm and Ecology Center with the school garden program.

“We lead by example,” Roddey said.

Gearing more toward sustainability has expanded horizons for the students, Roddey said. And though he admits locally grown food could certainly be dismissed as a current fad, he was quick to add that he thinks it will continue. “I don’t see it to be an ending fad. We are getting back to the grassroots where we started. There is value in supporting local. The seed-to-table concept is a good thing.

“Of course, there is also a lower carbon footprint, but you are also doing it for your health.”

This column is provided as a service by the UAF School of Natural Resources and Agricultural Sciences and the Agricultural and Forestry Experiment Station. Nancy Tarnai is the school and station’s public information officer. She can be reached at ntarnai@alaska.edu.

Smiling baby moose found near mile 225 Parks Highway, Denali. Taken on June 4. Thanks to Alexis Friedman, of Oceanside, California, for sending along this shot.