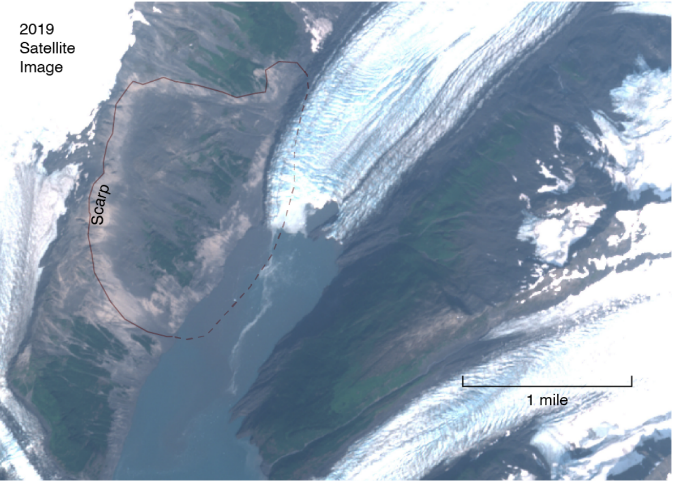 A slow-moving landslide along Barry Arm is well defined by a band of terrain called a "scarp," where the motion of the landslide has steepened the slope. 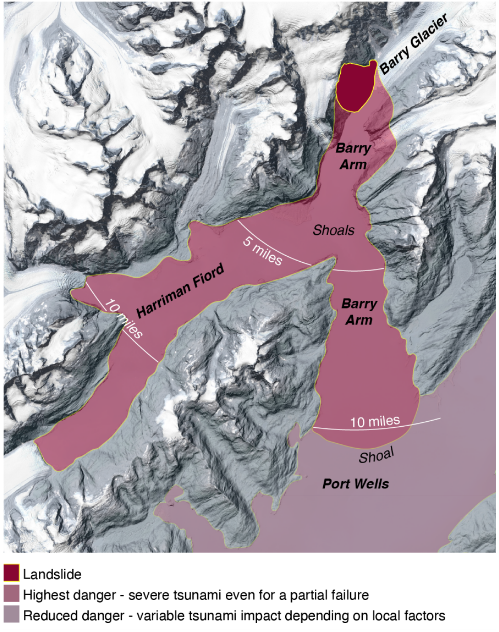 A slow-moving landslide along Barry Arm is well defined by a band of terrain called a "scarp," where the motion of the landslide has steepened…

The rapid retreat of Barry Glacier, 28 miles northeast of Whittier, could release millions of tons of rock into Harriman Ford and generate a large tsunami in Prince William Sound, according to Alaska's top geologist.

Steve Masterman, director of the Division of Geological and Geophysical Surveys said his staff and a working group of scientists say there is a threat of large and potentially dangerous tsunami that could have devastating effects on fishermen and recreationalists in the Sound. It is possible to happen within a year and likely within 20 years, according to a letter from the working group, attached.

The rock masses released in those slides were a tenth of the size of the potential slide in Barry Arm, Masterman said in news release.

The Barry Arm area is composed of layers of sedimentary rock that were merged with the southern shore of the Alaska mainland by plate tectonics. The area is riddled with numerous faults and cracks, which were further eroded and cracked by the movement of glaciers. As Barry Glacier retreats, it removes support for the valley walls, allowing rockfalls and landslides that can create tsunamis.

The mission of the DGGG is to both generate information on state mineral resources and protect Alaskans from geologic hazards, according to the news release. Alaska geologists were notified about two weeks ago of the landslide threat after a team of researchers at Woods Hole Research Center in Massachusetts saw significant movement in the area while comparing elevation data.

The region attracts many boaters engaging in commercial, sport, personal use or subsistence fishing and shrimping, as well as recreational boaters and campers, said Rick Green, special assistant in the Alaska Department of Fish and Game. In the summer, as many as 500 people may be in the area at one time, and at risk from a landslide-induced tsunami.

While it’s not possible to predict a landslide with precision, significant rainfall, snowfall or seismic activity — or a combination of any such effects – could precipitate a landslide event, and the continuing glacial retreat increases the odds as well, Masterman said.

Masterman said the state plans to work with other scientific organizations to draw up models to predict a potential tsunami's size and path. One important step would be to place solar-powered GPS monitors on the potential landslide to detect increased rates of movement that frequently precede catastrophic landslide failures, Masterman said.