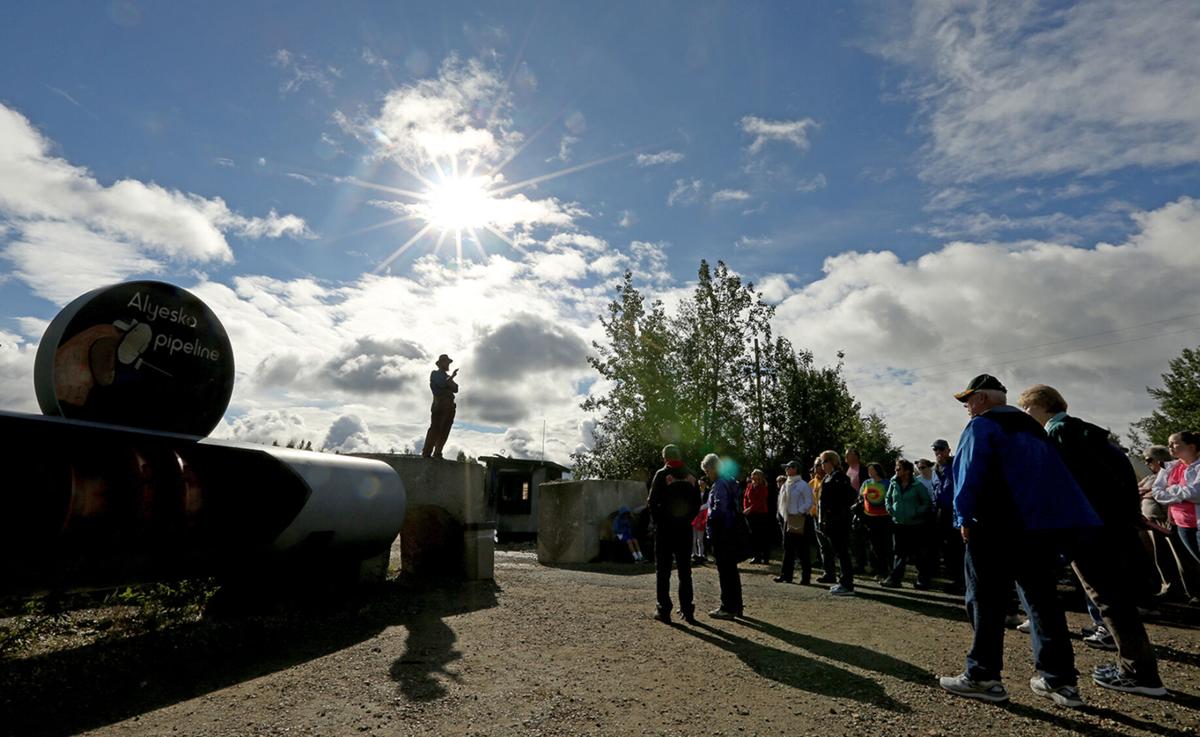 With cruises launching later next month some aspects of the tourism industry are still struggling from the pandemic. However, independent, high-end travelers who don’t rely on cruises are back and booking in record numbers for the summer. Pictured above George Peterson talks about the history of the trans-Alaska pipeline system at the start of a Gold Dredge #8 tour off the Old Steese Highway in Fox 2018. News-Miner photo 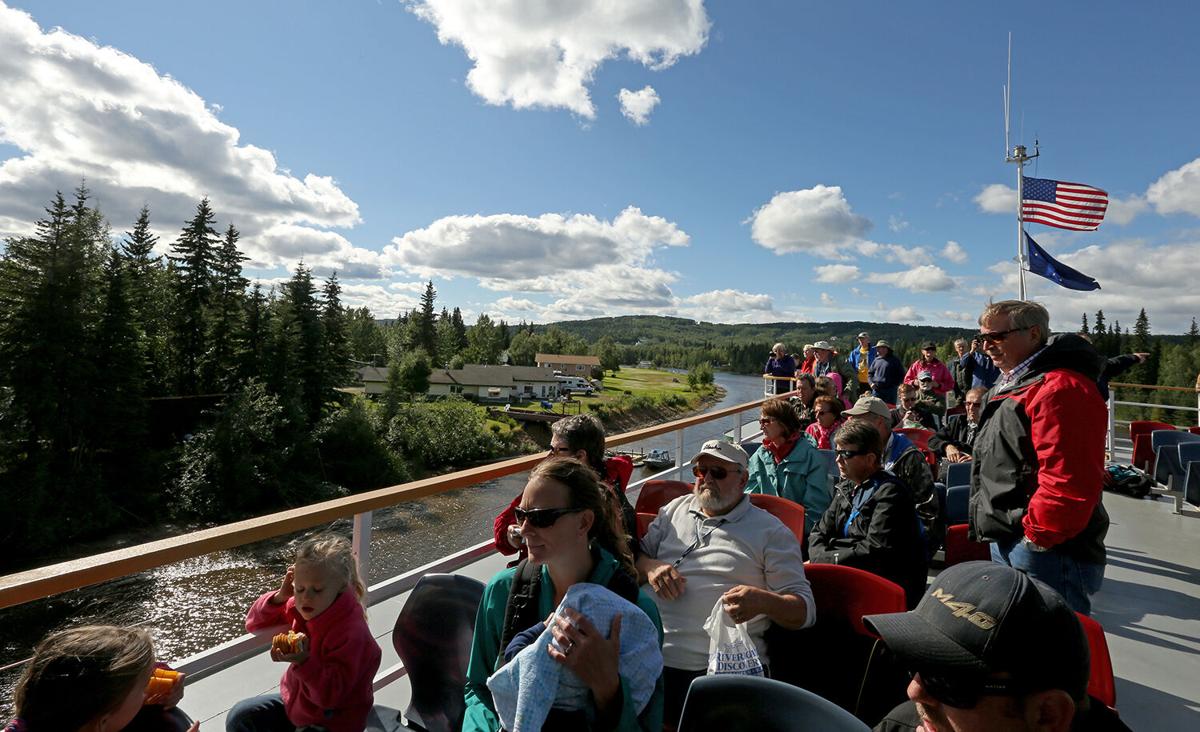 Tourists enjoy the sunshine while riding the upper deck of the Riverboat Discovery III on the Chena River July 2018. News-Miner photo 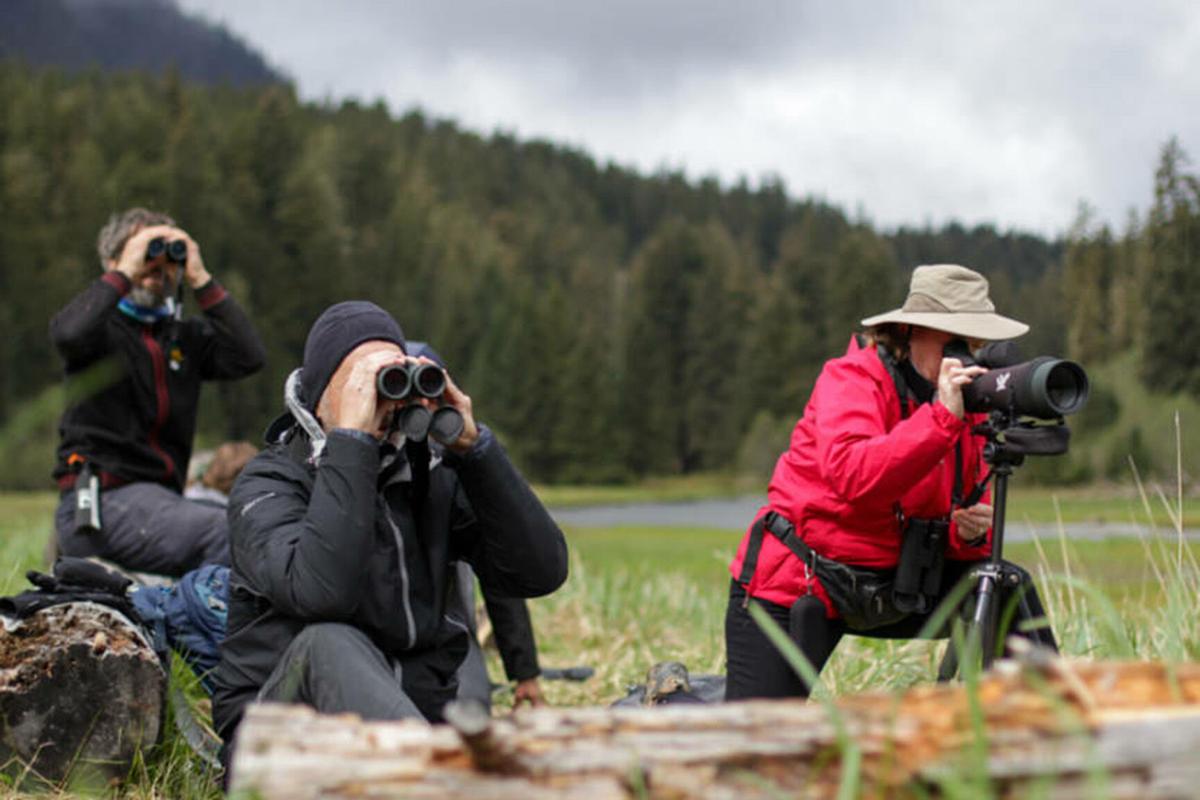 Greg and Cindy Clark of Idaho, center and right, watch a bear during a tour last month with guide Solan Jensen, left. The group was at Pack Creek on Admiralty Island south of Juneau. Nat Herz/Alaska Public Media

With cruises launching later next month some aspects of the tourism industry are still struggling from the pandemic. However, independent, high-end travelers who don’t rely on cruises are back and booking in record numbers for the summer. Pictured above George Peterson talks about the history of the trans-Alaska pipeline system at the start of a Gold Dredge #8 tour off the Old Steese Highway in Fox 2018. News-Miner photo

Tourists enjoy the sunshine while riding the upper deck of the Riverboat Discovery III on the Chena River July 2018. News-Miner photo

Greg and Cindy Clark of Idaho, center and right, watch a bear during a tour last month with guide Solan Jensen, left. The group was at Pack Creek on Admiralty Island south of Juneau. Nat Herz/Alaska Public Media

Chris McGraw, whose family owns Sitka’s cruise dock, is only expecting to see 20% of his company’s normal business this summer. But when he tried to go out to dinner a week ago, he said, every restaurant in town was full amid a surge in tourists traveling to Alaska on their own.

In Juneau, Laura Martinson saw just 7% of her normal May revenue this year at Caribou Crossings, her art shop just across from the town’s cruise docks. But her fiancé, who wants to go charter fishing for his bachelor party, can’t find a boat that’s not already booked.

And in Haines, guide Greg Schlachter relied on federal aid to keep open his fly fishing company that primarily serves cruise passengers. But he also runs an adventure travel agency, and interest in private and small-scale trips is at an all-time high. It’s so high, in fact, that Schlachter has convinced a couple of boat captains to buy million-dollar vessels to help meet the demand.

“It’s kind of a booming year for private experiences,” Schlachter said. “Demand has never been higher.”

These patterns are repeating themselves across the cruise-centric region of Southeast Alaska this summer: It’s feast or famine for tourism businesses, depending on their clientele.

The industry is on an undeniable rebound compared to the pandemic-induced hibernation of 2020. But only some businesses are returning to profitability, as the masses that typically arrive on large cruise ships are still missing.

After a complete cancelation of last summer’s cruise season, those large ships are making a much-vaunted return to the state later next month. But they’ll arrive in far smaller numbers — and likely with far fewer passengers — than what many of Southeast’s cruise-focused tourism businesses are built to serve.

“We are a volume-based economy down here, because we’re so seasonal,” said Martinson. “I don’t see us having this giant, breakthrough summer where we’re going to catch up. It’s just, can we survive until 2022? And how long can we hang on?”

Meanwhile, smaller-scale businesses that don’t depend on the big cruise lines are seeing record-high bookings this summer.

“This year is one of our best years ever,” said Scott Jorgensen, who manages the remote Pybus Point Lodge, 70 miles south of Juneau, where guests pay $1,200 a day.

“I almost forget that there was a Covid world out there,” he said.

The travelers now returning to Alaska look a lot like Cindy and Greg Clark.

One morning late last month, the Idaho couple had squeezed into a small plane at the Juneau airport, along with two guides and a reporter, and flew to the east coast of Admiralty Island for a day trip.

By noon they were crouched down behind a log. Ten yards away, one of the wild brown bears they’d come to see ambled past, pulling up mouthfuls of sedge grass. It was almost completely silent. The only other people at the remote wilderness spot were two British wildlife videographers and their guide.

The setting, with snow-covered mountains and waterfalls as a backdrop, was starkly different from Southeast Alaska’s cruise docks, which in a typical summer bustle with passengers, vans and salespeople.

“I just don’t like big crowds. I don’t want to be a tourist,” Greg Clark said. “I don’t like the idea of doing the same thing everybody else does — I like unique vacations.”

Greg, 62, is a retired hydrologist who’s previously been kayaking and canoeing in Alaska and the Yukon. And he’s the type of traveler who wouldn’t set foot on a cruise ship if you paid him.

He and Cindy were visiting the state for more than two weeks, staying in Airbnbs as they made stops in Denali, Homer and Juneau. Their budget for the trip was between $8,000 and $10,000 — substantially more than the price of many large-boat Alaska cruises, which can be as low as $2,000 for a couple.

Before the pandemic, just 10% of Southeast tourists were projected to arrive independently in 2020, whether by air or by driving the Alaska Highway, according Meilani Schijvens, who runs Juneau-based economics firm Rain Coast Data. The rest — an estimated 1.4 million people — were expected to come on cruise ships.

Compared to those cruise passengers, independent tourists like the Clarks tend to stay in Alaska for more time and spend more money: A 2016 survey found that visitors who flew in spent $167 a night, compared to $74 for cruise passengers. (The survey did not account for the cost of cruise packages themselves, some of which trickles down to Alaska businesses.)

Even with what appears to be an emerging boom in independent tourism, a precise accounting of Southeast’s summer visitors will be tough, said Schijvens, given the difficulty in tracking people traveling by plane. But anecdotes from across the region, and the state, suggest a strong resurgence.

Alaska Airlines wouldn’t release exact figures, but spokesman Tim Thompson said that its current summer counts and future bookings are “very strong.” While the company forecasted passenger loads to be 80% of pre-pandemic figures by the second quarter, it’s now anticipating being much closer to “traditional summer” numbers, Thompson said in an email.

“We are seeing much fuller flights from the Lower 48,” he said.

Alaska Seaplane Adventures, which took the Clarks on their bear viewing tour, is experiencing record demand, said Dan Kirkwood, the company’s general manager and one of the guides on the Clark’s trip.

“I hesitate to say this, but we’re on track to have our busiest year ever,” he said.

People in the tourism industry say that they’ve benefited, in part, from trips that were canceled last year that customers rolled forward into 2021 — which came on top of typical off-season bookings. And there are remaining obstacles to overseas travel, leaving Alaska at the top of the list for an exotic trip.

Kirkwood said he doesn’t want the cruise industry’s struggles to be the only narrative to come out of this year’s tourism season.

“The independent travelers, they’re the ones staying in hotels, eating at restaurants, using the same flights — so they’re supporting all the same things that residents use. And they make, I think, life in Alaska rich,” he said. “I would hate for folks to say that this summer was a wash just because one element of the industry wasn’t here.”

Tourism industry leaders have hailed Alaska’s Congressional delegation for helping to pass legislation that allows the resumption of large-boat cruises in late July.

But for Southeast businesses that depend on those vessels to bring most of their customers, the outlook for the rest of the summer remains grim.

In 2019, there were some 575 cruise voyages to Alaska; this year, 88 are planned, though those numbers may still change. Ships may also carry fewer passengers when they do arrive.

“I’m grateful for every single person that walks in the door,” said Martinson, the Juneau store owner. “But we certainly are not feeling like, ‘Great! It’s back! We’re rebounding.’ That’s not the climate of what’s happening down here.”

In a normal year, Martinson has eight employees at her store, where she sells work from more than 60 Alaska artists. She had to furlough her full staff last year and will bring back just two workers in the second half of this summer.

Similar stories are playing out at other businesses. Temsco Helicopters, which markets sightseeing flights to cruise passengers, typically has 60 employees at its tour operations in Juneau and another 50 in the tiny cruise town of Skagway. This summer, there are 10 in Juneau and four in Skagway, said Craig Jennison, the company’s vice president of tours and marketing.

Many of the businesses that market to cruise passengers operate at larger scales, with assets like planes and tour boats that can develop problems if they’re not kept running. That’s one reason many of them are operating this summer even when there likely will be too few customers to make money, employees said.

“For our ability to springboard into next year, it was going to be very hard to go from zero to 60 without operating on any sort of large level for two years,” Jennison said. “This helps the community get ready for that; I know it helps our operation get ready for that.”

Business owners also said it’s important that Alaska’s cruise-related businesses show the public, and investors, that the industry will be capable of a full return next year.

Before Covid-19, Alaska’s tourism industry was booming. And in Southeast in particular, it was a bright spot for a regional economy that’s otherwise been struggling. The pandemic hit at the worst possible time — in the spring, after businesses had invested heavily in upcoming summer operations and before they had time to earn their money back.

Schijvens surveyed Southeast businesses on the impacts of Covid-19 in late April. One-third of the 145 tourism operations that participated said they were at significant or moderate risk of closing, and nearly half said they would have closed without relief money.

“We heard story after story of people who looked at the economy, it looked like a great bet, they invested their life savings and still have not earned a single dollar yet,” Schijvens said. “It was a growing investment climate that you could really count on.”