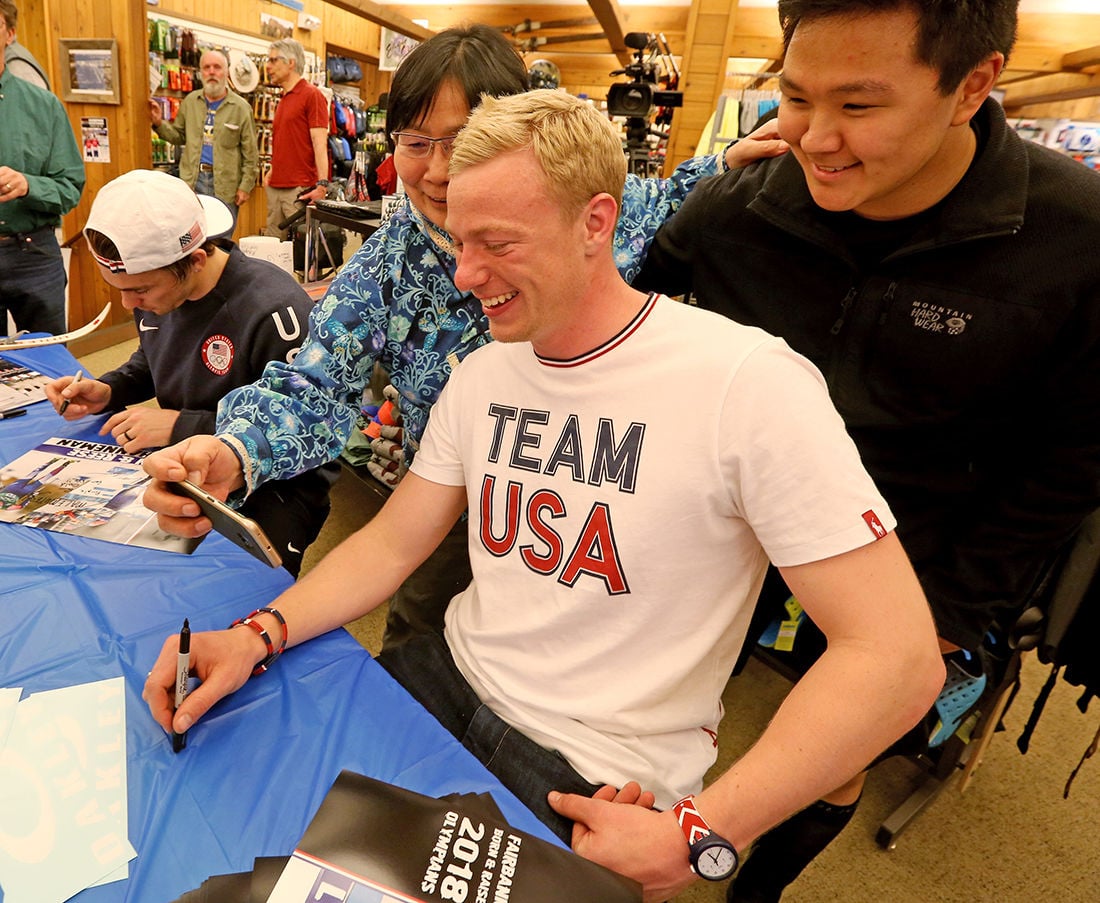 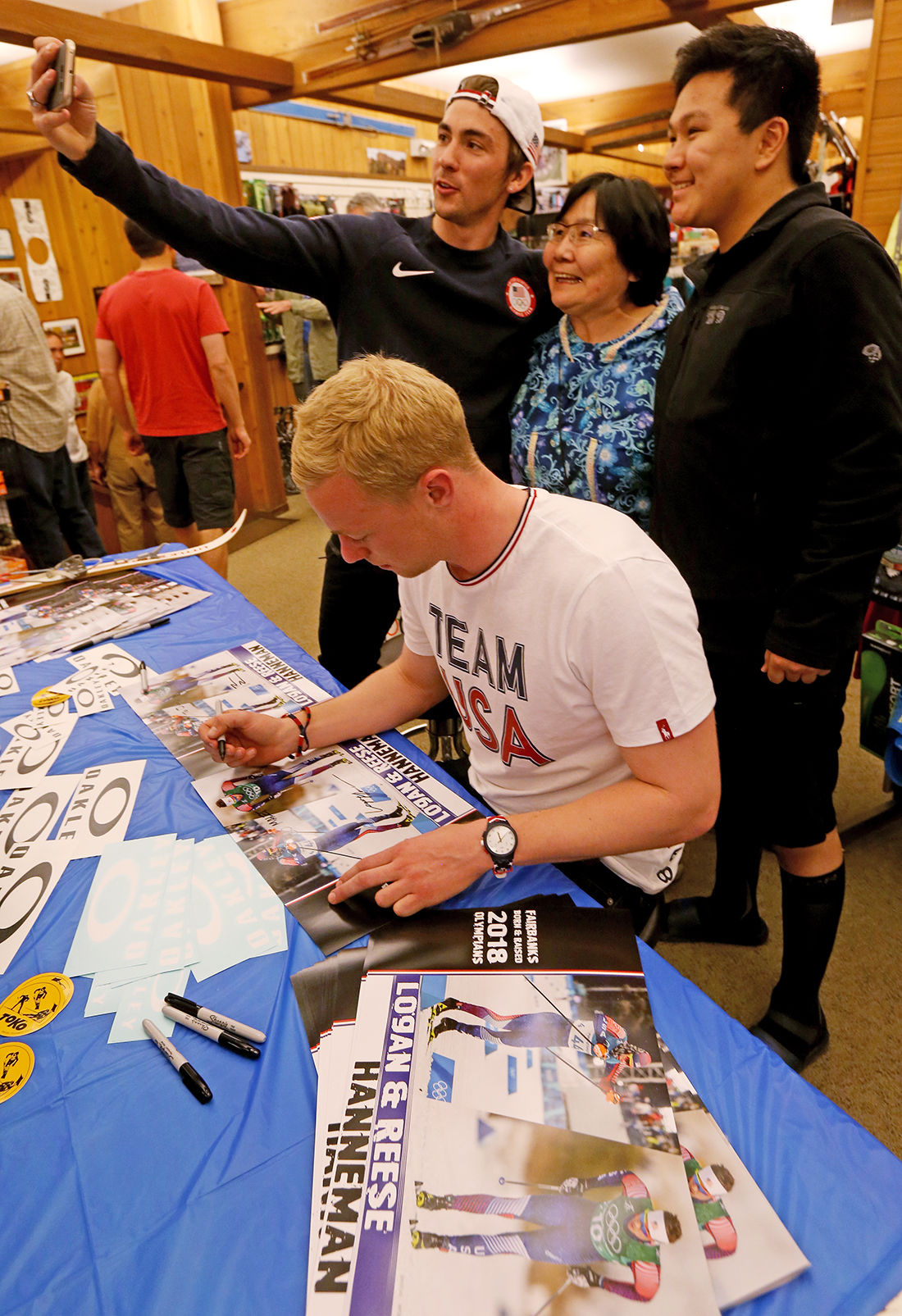 FAIRBANKS — Fairbanks brothers Reese and Logan Hanneman didn’t forget where their road to the 2018 Winter Olympics began. It was evident in a homecoming event Thursday night at Beaver Sports.

More than 100 people converged at the store on College Road to the meet the brothers who were among the 20 Team USA cross-country skiers in the 2018 Winter Olympics in February in PyeongChang, South Korea.

The turnout of all ages got  posters autographed and heard stories of the first Olympic experiences for Reese, 28, and Logan, 24. The homecoming started upstairs in the store with the brothers signing posters at a table while greeting people, and it moved to Beaver Sports’ basement for a slide show of the Hannemans through years, a talk from the brothers and a drawing for door prizes that included Team USA and Olympic apparel.

“They’re super-talented people and they’re amazing,” Eden Pascual, who does cross-country skiing for fun, said of the Hannemans.

Lynn Dominick coached Reese Hanneman in youth soccer. She said he told her that he had gone as far as he thought he could in soccer and that he was good at another sport.

“I said ‘You go for it,’” she recalled. “He knew when he wanted to go for cross-country skiing because he was better at it, and he made that decision on his own. I’m just proud of them and I’m glad I got to say (to Reese), ‘Go for it.’”

Reese Hanneman signed a poster for Dominick that read, “Thank you for everything. You taught me how to toughen up.”

Christopher and Orlando Roman also are brothers who cross-country ski. On Thursday night, they met two Olympic brothers and won pairs of gloves in the door-prize drawing.

Logan Hanneman was an All-American skier for UAF before he joined his brother in the Anchorage-based Alaska Pacific University Nordic Ski Center.

Matherly also read a proclamation from Vice President Mike Pence honoring the brothers and other members of the U.S. Olympic Team in PyeongChang. Pence attended the opening ceremonies of the Winter Olympics.

“We’re really honored by everybody that showed up here and we kind of want to bring it back and make this not really just about us, but about our community,”  Reese Hanneman said to the audience at Beaver Sports.  “There’s so many people in here who have sacrificed so much. We see so many volunteers who got up at 6 a.m. to go set up the v-boards (at the Birch Hill Recreation Area) so we wouldn’t get in the middle of the junior high race.”

The audience included people who helped train and coach the Hannemans when they were young skiers.

“So you guys should feel really proud and we feel really honored that we have a group of people like you that have gotten us here,” Reese said. “We did the intervals, we did the races but we would not be able to do that without the support of all you guys. So we want you to feel like you’re part of the 2018 (U.S.) Olympic Team because you are.”

The PyeongChang experience was special to the Hannemans because they got to compete together in the same Olympics for the first time.

Logan Hanneman said that Reese and he thought at first that they were competing for the same spot in the sprint category of the Olympic cross-country ski competition.

“After nationals, we heard a rumor that they (U.S. Olympic cross-country ski selection committee) might be bringing more than that from the sprint side of things,” Logan said. “Reese had won those two national titles but because I beat him in the qualifier, that’s what mattered. I was first and he was second, and that was as good as it could have gone.

“It just worked out that they ended up taking both of us,” Logan said. “It was a great feeling because you want him to do well and he wants to see me do well, but at the same time you want to reach your own goals and we didn’t want each other to stand in the way of that ... and fortunately it worked out.”

Logan raced in the sprint in PyeongChang while Reese didn’t compete in the sprint  because he became ill but he raced for the U.S. men in the 4x10-kilometer relay.

“The goal was to make the Olympics. That was a huge thing,” Logan said.

The Hanneman brothers, Lathrop High School graduates, are the fourth and fifth cross-country skiers from Fairbanks to compete in the Olympics. Audun Endestad and Judy Rabinowitz raced in the 1984 Winter Games in Sarajevo, Yugoslavia, and Aelin (Peterson) Allegood competed in the 2002 Winter Olympics in Salt Lake City.

The brothers also showed support on Thursday night for Allegood, who is battling breast cancer. They made a cellphone video of the audience in the Beaver Sports basement shouting in unison, “Go, Aelin.”