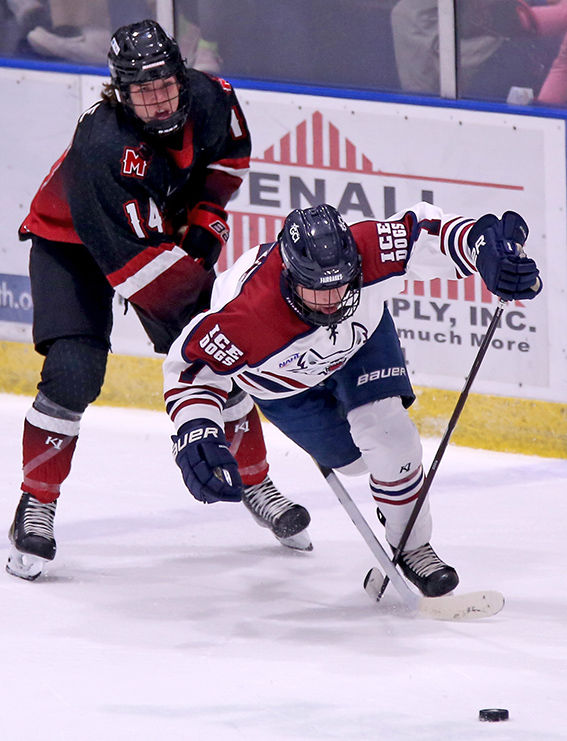 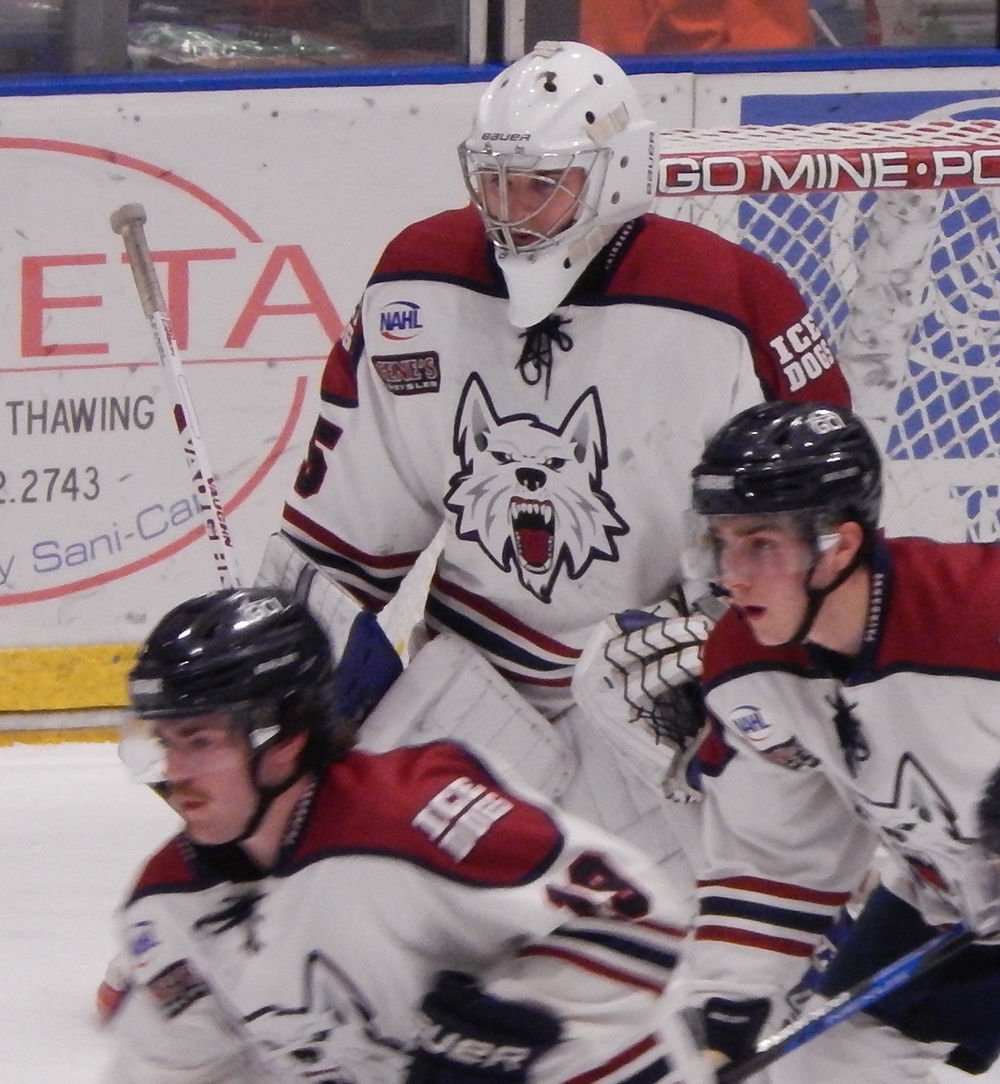 Fairbanks Ice Dogs goaltender Mattias Sholl watches Jack Johnston (19) and Andrew Garby, lower right, go on the attack after a faceoff during a North American Hockey League game against the Janesville Jets on Nov. 29 at the Big Dipper Ice Arena. Sholl was selected Wednesday as the NAHL Midwest Division Goaltender and Most Valuable Player of the Year. DANNY MARTIN/NEWS-MINER FILE PHOTO

Fairbanks Ice Dogs goaltender Mattias Sholl watches Jack Johnston (19) and Andrew Garby, lower right, go on the attack after a faceoff during a North American Hockey League game against the Janesville Jets on Nov. 29 at the Big Dipper Ice Arena. Sholl was selected Wednesday as the NAHL Midwest Division Goaltender and Most Valuable Player of the Year. DANNY MARTIN/NEWS-MINER FILE PHOTO

Friendships are a reason for Fairbanks Ice Dogs forward Matt Koethe committing to the University of Alaska Fairbanks, of the Western Collegiate Hockey Association.

“Obviously, having guys move up (to college hockey) with you is a pretty special thing,” Koethe said by phone Wednesday, one day after he announced on Twitter his commitment to UAF’s NCAA Division I program.

“Woodsie (defenseman Trenton Woods) is coming in next year (2020-21) and I know (forward Mason) Plante is committed (to UAF). So that’s a really special thing to have in common.

“And playing against your buddies ... to me one of the best things in the game is to make friends. To know I’ll see those faces down the road is really special.”

Koethe and Johnson were, respectively, the first and third-leading scorers for the Ice Dogs this past season in the North American Hockey League. The 26-team Tier II junior A league cancelled in March the remainder of its season because of the COVID-19 pandemic.

Koethe, Johnson, Woods and Plante are among 11 players from the Ice Dogs’ 2020-21 roster who committed to Division I programs.

Koethe, from Minnetonka, Minnesota, provided 21 goals and 30 assists for 51 points in 52 games for the Ice Dogs, who were atop the Midwest Division standings when the NAHL season was canceled.

“He’s definitely one of the faster players in the league (NAHL),” Stewart said.

“He’s pretty adaptable to play up and down the lineup, so they’re going to be able to see a lot of value and being able to put him in a lot of situations.”

Koethe also was impressed with Largen.

“I was just looking at the progress he’s made in the two years he’s been there (as head coach),” Koetie said. “He’s turning the program around, obviously. I like the intensity he brings, plus he’s a really good coach.”

The Nanooks placed fourth in the WCHA regular season and earned home ice for a best-of-three quarterfinal series in early March against Bowling Green State.

The fifth-place Falcons, of Ohio, swept the series at the Carlson Center in two games.

Koethe also will be a player who is driven when he suits up for UAF.

I just love playing the game, and I guess I was taught to play the game hard every time I hit the ice,” he said.

“I like winning, so working as hard as you can usually brings success.”

Johnston, who couldn’t be reached for comment Wednesday, contributed 18-27-45 totals in 52 games this past season for the Ice Dogs.

In three seasons in an Ice Dogs uniform, the native of St. Paul, Minnesota, compiled 115 career points from 49 goals and 66 assists.

Johnson also was a leader for the Ice Dogs in ways that don’t show up a scoresheet.

“He’s got a lot of intangibles, away from the rink, for sure,” Stewart said by phone Tuesday.

“So he’s a great combination of the skilled hockey player (with) leadership. The locker room just loves him and you can see it.

“He’s got an infectious ability about him and we couldn’t be more proud of him as our leader and moving on to play hockey at an institution like St. Cloud State.”

Johnson will be the second Ice Dog to skate with the St. Cloud State Huskies.

Patrick Newell, a Ice Dogs forward in 2012-13, skated for the Huskies from 2015-19. He spent this past season with the Hartford (Connecticut) Wolf Pack, the American Hockey League affiliate of the NHL’s New York Rangers.

The rankings comprised players who are expected to selected in this year’s NHL Draft. The draft was set for June 26-27 in Montreal but has been postponed because of the COVID-19 pandemic.

The 5-foot-10, 180-pound native of Wasilla is the only current NAHL player among the 217 North American skaters in the final rankings.

Abbott, 18, contributed three goals and 24 assists for 27 points in 50 games this past season for the Ice Dogs.