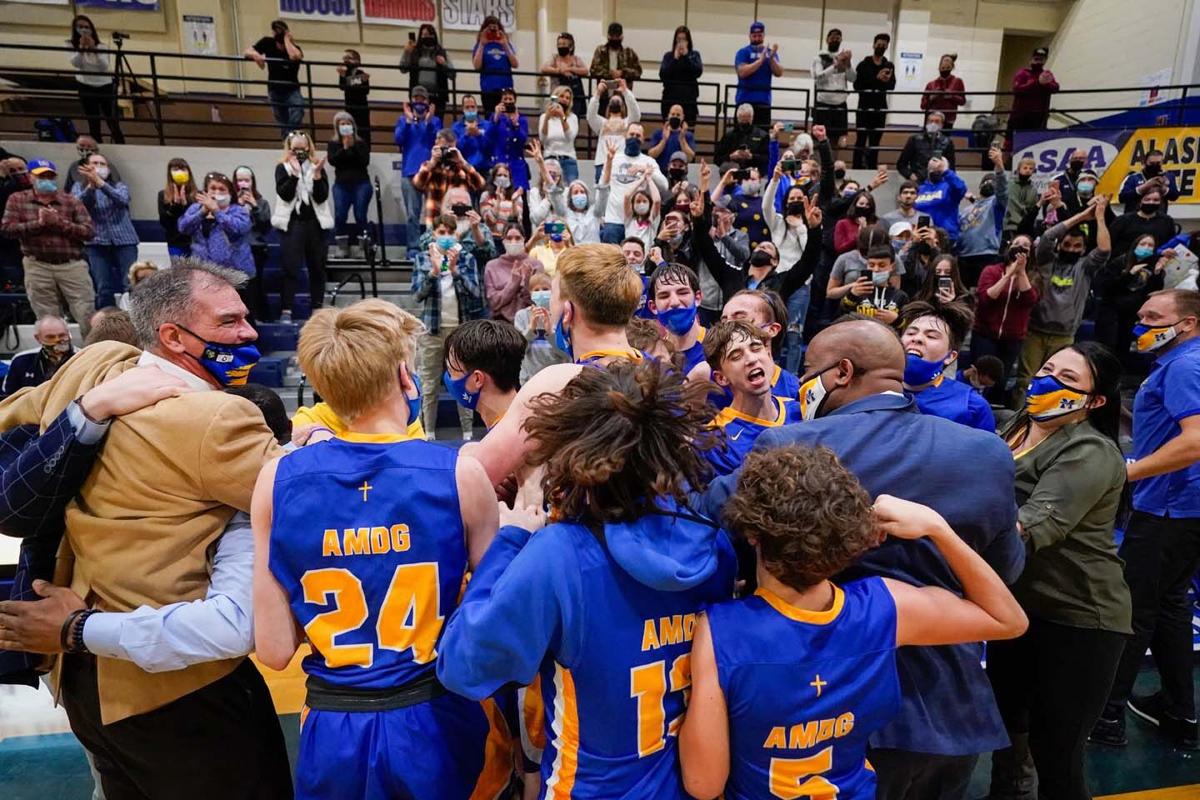 The Monroe Catholic boys basketball team celebrates Saturday after their 67-52 win in the 3A state championship basketball game against Anchorage Christian Schools in Palmer. 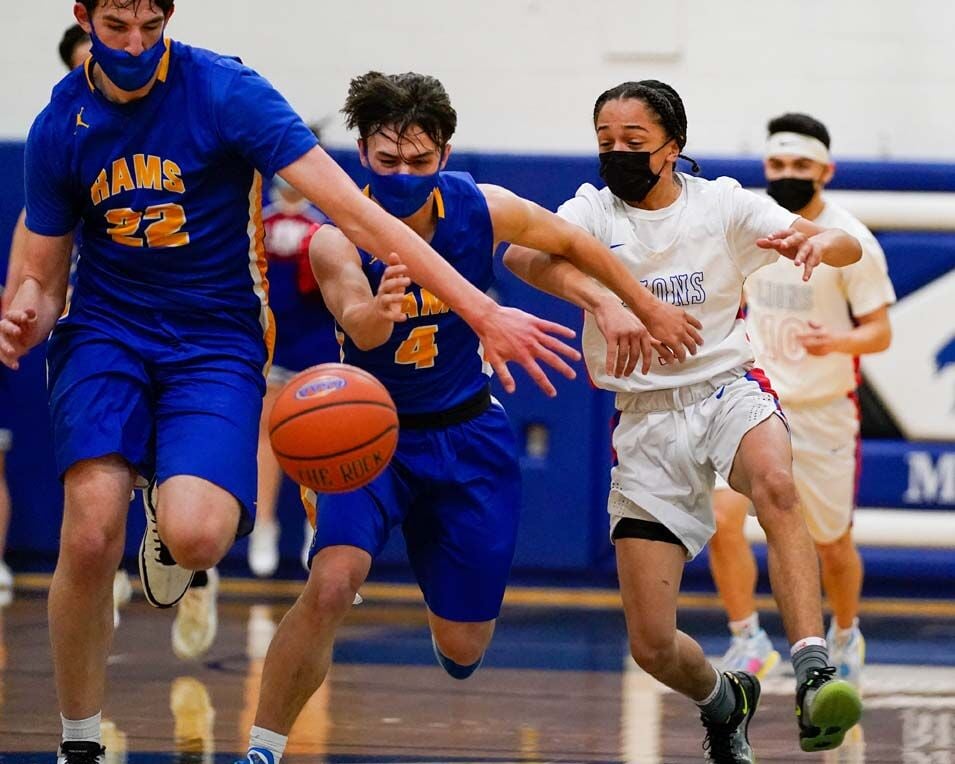 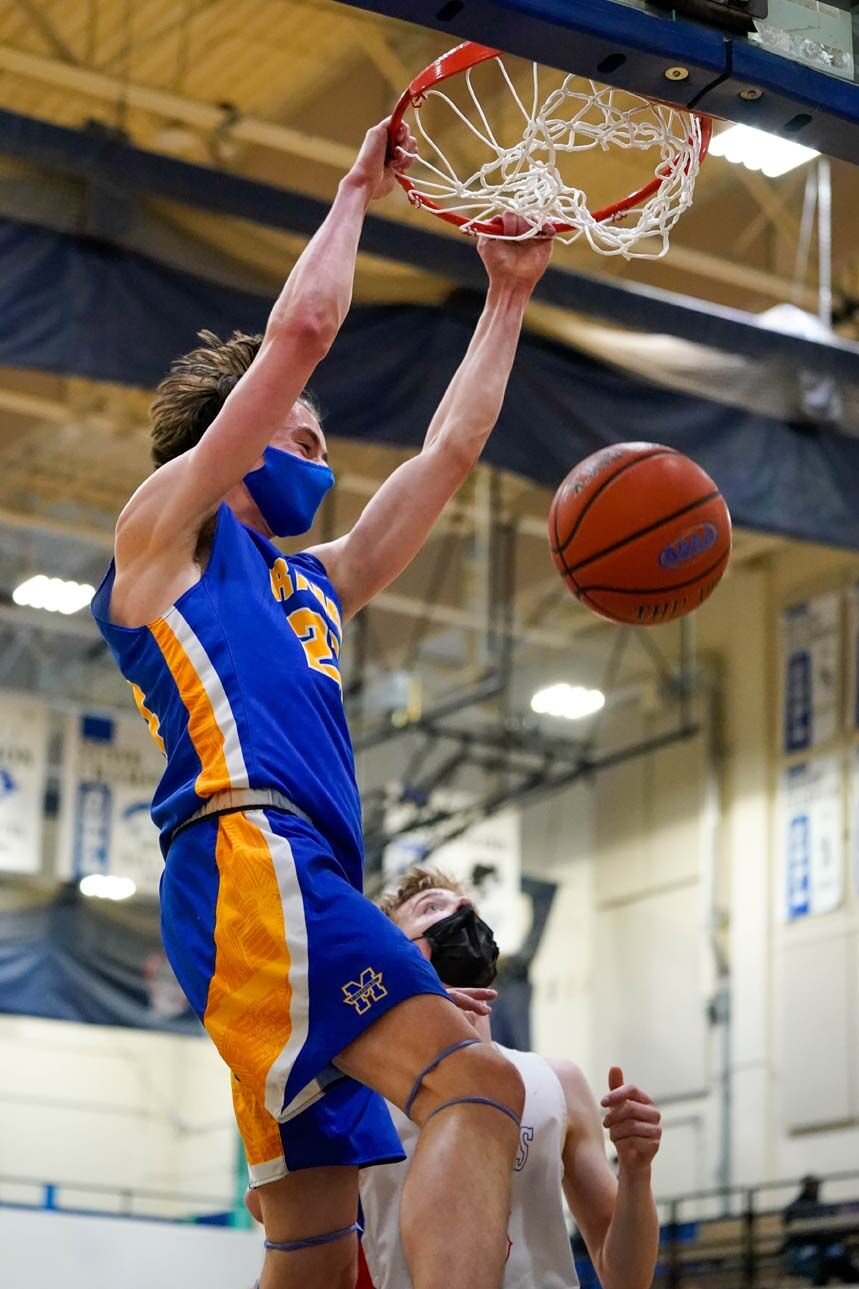 The Monroe Catholic boys basketball team celebrates Saturday after their 67-52 win in the 3A state championship basketball game against Anchorage Christian Schools in Palmer.

Monroe Catholic starter Malachi Bradley was unable to play in the 3A Boys Basketball State Tournament due to illness. Starter Jase McCullough was two weeks removed from being on crutches at the start of the tournament. 3A state MVP Quinn McHenry had been held to 22 points in the first two state tournament games. The Rams were facing the most recent 3A state champions for the state title in Anchorage Christian. All of those factors considered, it would've been reasonable to doubt Monroe's chances of winning the state title this year.

None of those factors stopped the Rams from hoisting the 2021 3A state title trophy Saturday afternoon in Palmer.

Bradley may not have played, but his substitute (Trevor Mahler) contributed seven points and five rebounds. McCullough may have been hobbled, but he still finished with nine points and six assists. McHenry may have had two un-McHenry like performances prior, but he finished the night with 30 points in an MVP performance. Anchorage Christian may have been the 2019 state champions, but after Saturday afternoon, the Monroe Catholic Rams were the 2021 champs courtesy of a 67-52 victory over ACS.

It'd been a long time coming for the Rams. Monroe hadn't won a state title since 2014. They appeared in the title game in 2015 and 2017, but came up just short. They were considered the favorite to win in 2020, but the COVID-19 pandemic canceled all postseason tournaments before they could be played. With five seniors on this years team, including the MVP McHenry, all-state performer McCullough and all-conference performer Tommy Bast, it just seemed like this would be the year the Rams hoisted the trophy even without Bradley, an all-state selection.

Early on, it looked like it may not end up happening. Anchorage Christian initially raced out to a 14-7 lead in the early going before Mahler scored on a bouncing layup and McHenry picked up a steal-and-score on an and-1 layup to get back within two. ACS responded with consecutive layups of their own before McCullough secured a last second layup to close the quarter. Still, Anchorage led 18-14 after one quarter of play.

In the second quarter, McHenry showed everyone why he was the 3A MVP this year. After making two free throws to start the quarter, McHenry drained back-to-back 3-pointers to put Monroe up 22-18. ACS sent the McHenry show to commercial break with a layup, but Evan Puryear nailed a 3-pointer, Bast made a trey of his own, and McCullough nailed a runner to put Monroe up 30-22. Things kept going Monroe's way the rest of the quarter with Bast scoring after a Ram steal, McHenry scoring on a reverse layup, Puryear draining one from beyond the arc, and Mahler getting a layup on a beautiful assist from Bast. All of that led to Monroe staring at a 39-29 halftime lead over ACS. Puryear finished with 11 points while Bast contributed 10.

The two teams traded baskets to start the third quarter before Monroe went on a 7-0 run beginning with an and-1 layup by McCullough to get to 49-34. ACS picked up a jumper but McHenry hit yet another 3-pointer to make it a 52-36 game. The Rams kept the scoring going and carried a 56-40 lead entering the final quarter of play.

Things got interesting again in the fourth. Though McHenry hit a pair of free throws to start and Mahler added another, ACS picked up six points of their own before a McHenry layup. Anchorage Christian scored on an and-1 layup after and they suddenly found themselves down just 61-49. After a Puryear layup, ACS hit a free throw to make it 63-50, but then McHenry came in with a slam dunk to seemingly seal the win late. Both teams turned to the reserves over the last two minutes, the clock ultimately ran out, and the Rams left Palmer High School with their first basketball state title in seven years.

Tri-Valley girls are going to state after winning regionals at the Golden Heart Conference.